Submitted Successfully!
Thank you for your contribution! You can also upload a video entry related to this topic through the link below:
https://encyclopedia.pub/user/video_add?id=13586
Check Note
2000/2000
Chemical Rings
Edit
Upload a video
This entry is adapted from 10.3390/catal11070765

The epoxidized group, also known as the oxirane group, can be considered as one of the most crucial rings in chemistry. Due to the high ring strain and the polarization of the C–O bond in this three-membered ring, several reactions can be carried out. One can see such a functional group as a crucial intermediate in fuels, polymers, materials, fine chemistry, etc.

Three-membered rings are fascinating chemical functional groups because they represent an excellent compromise between stability and reactivity. The oxirane ring, consisting of two carbons and one oxygen atom, is the most representative of these three-membered rings. The synthesis of this ring is most often performed by the oxidation of unsaturated groups. Another name for this reaction is epoxidation. This reaction can be undertaken in gas, liquid or liquid–liquid systems, where a catalyst plays an important role. An overview of common epoxidation methods and routes are shown in Figure 1 . 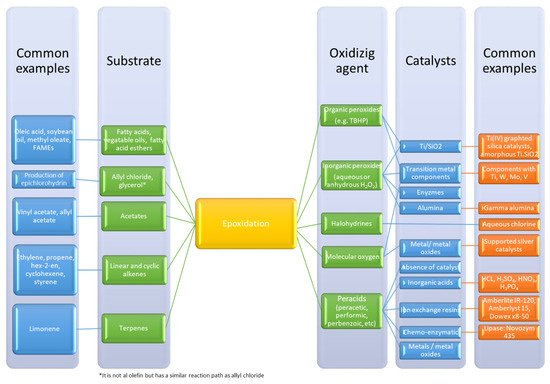 Epoxides are valuable chemical intermediates and can be used in different sectors such as surfactants, resins, fine chemicals or polymers. The interaction between carbon dioxide and epoxide [1] can produce other valuable intermediates: carbonates. According to some research groups [2][3], this reaction can contribute to valorize carbon dioxide. These carbonates are promising materials for the production of polymers such as polyurethanes [4][5].

2. Synthesis of Ethylene and Propylene Oxide

In ethylene oxide production, silver is the heterogeneous catalyst which leads to a high selectivity towards the desired product [6][8]. However, this value depends on the diameter of Ag particles supported on α-Al 2O 3; more precisely the selectivity increases with the increasing of the particle diameter, as within an in-series mechanism, smaller particles lead to higher reactivity, thus lower selectivity referred to the intermediate specie (e.g., epoxide) [6].

Different ways to produce propylene oxide exist and between them, the chlorohydrin process represents one of the most used as well as hydroperoxide process which produce tert-butyl alcohol and styrene as coproducts [9].

Another promising catalyst for its high selectivity in propylene oxidation is Cu; in the last period, copper-based catalysts are becoming more important as they can be used in several applications [10]. One of the reasons why their use is increasing is their cheapness as well as the high selectivity towards the propylene oxide, as mentioned before. For example, in the literature it is reported that in the presence of Cu/SiO2 a propylene oxide selectivity of 53% was reached for a conversion of 0.25% [11].

At the moment, the largest market share of vegetable oils account for palm oil (46%)—it is cultivated extensively since it is used both in cooking as well as in the rapidly growing biofuel industry [12]. Regardless of edible or not, epoxidized vegetable oils can be used as such as lubricants or modified further into cosmetic products, surfactants, paint ingredients, resins or biopolymers. This field of research has increased drastically during the last 15 years due to the concern of global warming and the mutual intention to reduce fossil-based, CO2-polluting production processes. Vegetable oils can be chemically modified in numerous ways, such as transesterification, epoxidation, hydroxylation, carboxylation, halogenation, hydrogenation, and oxidation. However, their epoxidation has gained a lot of attention due to the high reactivity of the epoxide group [13]. 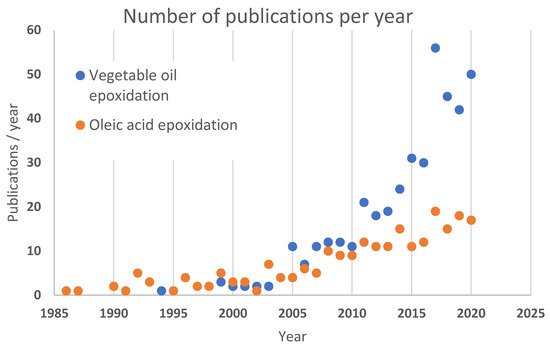 Figure 2. Number of publications per year with the search words vegetable oil epoxidation and oleic acid epoxidation, obtained from webofscience.com (some are overlapping).

There are approximately 30 review papers concerning vegetable oil epoxidation—the most recent dealing with a general overview of synthetic approaches [14], catalytic epoxidation and analysis of products [13], end-product related i.e., lubrication [15] or bio-resin [16], and process intensification-related i.e., microwave-assisted epoxidation [17]. Some reviews focus on the type of vegetable oil that is used, i.e., tall oil [18].

One drawback with the system is that it operates in several phases and therefore, the reaction velocity is limited by a slow mass transfer of the reactive species between the phases. Another drawback is that it works best with high-oleic acid (C18:1) vegetable oils, whereas the epoxidation of linoleic acid groups and higher unsaturation fatty acids, may sterically hinder the reaction [19].

The intermediate, DCH, could be directly produced from glycerol and hydrogen chloride without chlorine. Therefore, this type of reaction system has many advantages such as more resources, shorter technical processes, less investment, less consumption of water and energy, safer operation, fewer byproducts containing chloride, and is more environmentally friendly.

Moreover, the yield of ECH will be low once the reaction system contains an excess of alkaline solution leading to the accelerated hydrolysis of ECH to glycerol. Thus, ECH should be collected immediately to avoid the formation of byproducts. Moreover, the epoxidation of DCH and the yield of ECH can be easily affected by factors including mole ratio, temperature, reaction time, the existence of mineral salt.