Submitted Successfully!
Thank you for your contribution! You can also upload a video entry related to this topic through the link below:
https://encyclopedia.pub/user/video_add?id=13577
Check Note
2000/2000
Microalgal Food
Edit
Upload a video
This entry is adapted from 10.3390/foods10071626

Microalgae are microscopic photosynthetic organisms that are found in marine, as well as in freshwater, environments. These unicellular organisms have a size ranging from a few to several hundred micrometers, depending on class and species. Most microalgae have photosynthetic mechanisms similar to land-based plants but generally more efficient in the photoautotrophic conversion of solar energy into biomass. This is since the cellular structure of microalgae is less sophisticated, and the normal environment is aqueous with easy access to CO2 and further nutrients [1].

Microalgae are a resource for food and feed with high potential. Currently, the most cultured species are Arthrospira platensis and Arthrospira maxima, Chlorella vulgaris, Dunaliella salina, and Haematococcus pluvialis, which can be grown photoautotrophically with sunlight as an energy source. The carbon source is CO2, which can be supplied by gassing or supplementing the water with soluble carbonates. Heterotrophic cultivation on organic carbon sources such as sugars is used for the production of n-3 fatty acids with marine organisms (Crypthecodinium cohnii, Schizochytrium sp. TC 002, and Ulkenia sp. strain TC 010) in fermenters excluding sunlight [2]. For feed for fish aquaculture, the main cultivated species are: Chlorella vulgaris, Isochrysis galbana, Pavlova sp., Phaeodactylum tricornutum, Chaetoceros sp., Nannochloropsis oceanica, Skeletonema sp., Thalassiosira sp., Haematococcus pluvialis, and Tetraselmis suecica [3][4][5]. However, the technology to produce microalgae is still immature. Research and development have been done in recent years and continue on cultivation systems. A leap in the development of microalgae technology is required; on a practical level, the scale of production needs to increase with a concomitant decrease in the cost of production [1]. Microalgae are cultivated in a wide range of different cultivation systems that can be placed outdoors or indoors. Cultivation systems range from open shallow raceway ponds to closed photobioreactors. The systems mostly used on a large scale and on a commercial basis are open systems [6].

Low cell densities and moderate growth rates are the major obstacles towards a broad commercial use of microalgal products. The most important cultivation parameters are light and nutrient supply. Decisive factors of light supply are light intensity, spectral range, and photoperiod. 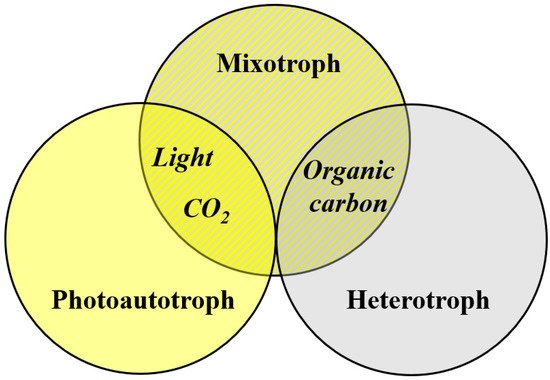 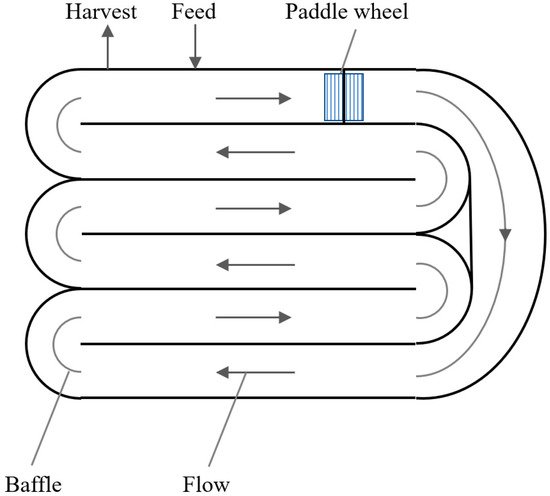 Figure 2. Scheme of a raceway pond. 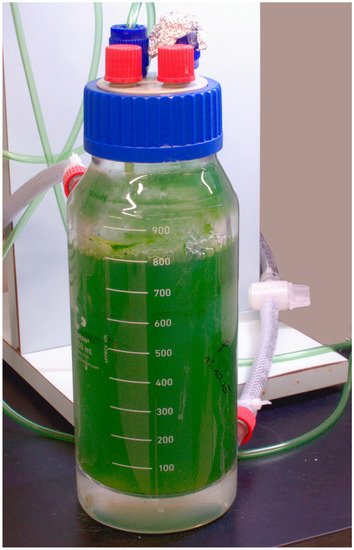 A major bottleneck in the industrial production of products from algae is that algae cultures are prone to contaminations. To avoid contamination, closed systems can be used; however, in open systems (large scale), contamination is unavoidable. These are either organisms that graze upon and feed on the algae or undesired algae strains that take over the cultivation media. Contaminations can lead to culture crashes and product loss, and also the formation of toxins [12][13]. Therefore, effective strategies to avoid, repress, monitor, and control contaminants without interfering with the growth of the target microalgae are required. Grazers and contaminants experienced (especially in open-pond cultivations) are mainly insect larvae, protozoans (ciliates, amoeba, dinoflagellates), viruses, fungi, bacteria, and other algae strains [14].

Similar to the majority of bioprocesses, downstream processing constitutes a considerable cost factor. Specifically, the cost for the harvest of microalgae was calculated as 20–30% of the total production cost of cheap bulk products such as biodiesel [15].

In the majority of applications, subsequent energy-intensive dewatering and biomass drying steps are required. Discussion of further downstream processing is highly strain and product-specific. Extraction of oils and dyes requires cell rupture, centrifugation, and/or solvent extraction [16]. The conditions of cultivation, harvesting, and subsequent processing clearly influence the nutritional composition of microalgae. For example, protein loss by the drying of Arthrospira platensis was previously reported. With freeze-drying, 5% of protein was lost, whereas spray, convective, and infrared drying led to protein losses of 10 up to 25% [17].

One of the major concerns relates to the rentability of microalgal products. Key challenges are the high production costs of products made up of commercial-scale cultivation, harvesting (dewatering), and finally, product quality assurance. The value of microalgal products spans from exceptionally high market values (e.g., EPA 4600 USD/kg) to products in the middle price segment (e.g., biomass for food and feed 10 to 50 USD/kg) down to fishmeal replacement (fishmeal price is approximately 2 USD/kg) [18]. Several algal-based foods have been launched in the last years: Microalgae biomass is used in the form of powders, tablets, and capsules. Especially in Western countries, the number of snacks and drinks containing microalgae doubled in the past few years. Most new products launched were bakery, meals, and chocolate confectionery [19]. Improvements in capital and operational costs shall enable economic production of low-value food and feed products going down to fishmeal replacement in the future economy [18][20].

5. Food Ingredients and Nutraceuticals from Microalgae

5.1. Microalgae Used as a Food Ingredient

When using microalgae as a food ingredient, some limitations are obvious. This is primarily because of the intensive green color that is added to the recipes and a fishy aroma [24]. As the flavor is one of the biggest disadvantages of algae-containing food, a lot of work was invested in masking this flavor by using intensive spices [25] or by using the aroma of the microalgae to bring the typical aroma of seafood out. A commercial product [26][27] was developed that shows microalgae can be used as an ingredient in foods with a typical seafood aroma. Many products from algae are commercialized directly as biomass. These are sold as nutritional supplements since the microalgae, mostly Arthrospira platensis, contain high amounts of protein and n-3 fatty acids. Other products derived from Haematococcus pluvialis are used for supplementing the carotenoids astaxanthin and lutein. Since microalgae are also known for having high concentrations of n-3 fatty acids (mainly Chlorella vulgaris and Arthrospira platensis containing γ-linolenic acid, eicosapentaenoic acid, docosapentaenoic acid, docosahexaenoic acid, Table 2), extracts are developed that might be used to upgrade foods with these fatty acids.

5.2. Isolated Products from Microalgae for Enrichment of Foods

Some of the cyanobacteria are known for their high content of n-3 fatty acids (Table 3). Since the alimentary supply of n-3 fatty acids is generally limited due to limited availability of fish oils, a series of efforts are made to increase the content of these fatty acids in foods. From a nutritional point of view, the uptake of n-3 fatty acids from microalgal oil is comparable to fish oil with the possible advantage of a better supply with carotenoids [28]. In addition to adding the n-3 fatty acids directly to the food, it is possible to enrich animal products by supplying the unsaturated fatty acids with the feed. This was shown, for example, by Lemahieu and a co-worker [29], who could increase the DHA content of eggs when feeding Isochrysis galbana to the chicken. Polyunsaturated fatty acids (PUFAs), particularly the n-3 fatty acids having five (EPA) or six (DHA double bonds, are prone to oxidation due to the lability of the hydrogens linked to the methylene groups between the double bonds. These PUFAs require stabilization against oxidation. Shen and co-workers could show that a combination of octyl gallate with tea polyphenol palmitate showed the most effective protection [30].

5.2.2. Carotene and Other Carotenoids

Microalgae are known for producing high amounts of carotenoids. Dunaliella salina can produce β-carotene up to 13% of dry weight. Astaxanthin can be found in Haematococcus pluvialis, which produces up to 7% of the dry weight. Canthaxanthin was found in Coalstrella striolata containing close to 5% of dry weight. Lutein, zeaxanthin, fucoxanthin, echinenone, and violaxanthin could also be identified in different species [31].

As mentioned earlier, the nutritional composition of microalgae is of high quality with respect to amino acids, fatty acids, and minor components such as vitamins and pigments. With these high concentrations of nutrients, microalgae are predestined for the manufacturing of food supplements. The main microalgae that are marketed as dried powder, capsules, or pressed pills are Chlorella vulgaris and Arthrospira platensis. A series of positive health effects of microalgae are described ranging from an influence on the cholesterol level and associated coronary heart diseases, antiviral, antimicrobial, and antifungal activity. The presence of sterols (e.g., clionasterol) implies all the potential positive health effects that are related to an intake of these compounds [32].

Some of the cyanobacteria species are known for their potential of producing potent toxins. When these microalgae contaminate the cultures for food production, the toxins pose a severe health risk. Some examples are, microcystin and related structures are produced by Microcystis aeruginosa, saxitoxin by Aphanizomenon flos-aquae, and anatoxins by Anabaena flos-aquae. The chemical structures comprise cyclic peptides (microcystin), alkaloids (anatoxin, saxitoxin), and lipopolysaccharides affecting the liver, nerve axons, and synapse, as well as the gastrointestinal tract [33]. The group of Dietrich published an overview on the presence of algal toxins in commercially available food supplements. In their study, they only found microcystins, which were present in products of Aphanizomenon flos-aquae. Extracts from all the tested samples showed cytotoxic effects, which leads to the conclusion that additional components should be present that have the potential to induce adverse effects in consumers [34].

More
© Text is available under the terms and conditions of the Creative Commons Attribution (CC BY) license (http://creativecommons.org/licenses/by/4.0/)
Upload a video for this entry
Information
Subjects: Food Science & Technology
Contributor MDPI registered users' name will be linked to their SciProfiles pages. To register with us, please refer to https://encyclopedia.pub/register :
Regina Kratzer
View Times: 64
Revisions: 2 times (View History)
Update Time: 26 Aug 2021
Table of Contents
1000/1000
Hot Most Recent