Submitted Successfully!
Thank you for your contribution! You can also upload a video entry related to this topic through the link below:
https://encyclopedia.pub/user/video_add?id=13564
Check Note
2000/2000
Neuroprotective Potential of Mild Uncoupling
Edit
This entry is adapted from 10.3390/brainsci11081050

The term uncoupling is used concerning the situation when a proton bypasses ATP synthase and electron transport becomes disconnected from the process of ATP synthesis due to a short-circuit of the membrane potential existing across the membrane. It also applies to mitochondria, where uncoupling causes a loss of the tight association of oxidation of respiratory substrates and ATP synthesis. Generally speaking, uncouplers exert their action by organizing a proton leak in the inner mitochondrial membrane, which jeopardizes the generation of the proton motive force.

There is a great cluster of knowledge about the protective capabilities of uncoupling of oxidative phosphorylation in the mitochondria of numerous cells, including neural ones, thus compromising chemiosmotic mechanism of energy production [1][2][3][4][5][6][7][8][9][10][11]. According to this mechanism, proton pumps residing in coupling membranes generate the transmembrane potential of hydrogen ions (protons), which is used by ATP synthase to make ATP, thus organizing a tight coupling between the processes of oxidation and phosphorylation. The requisite of this mechanism is a tightly regulated proton cycling existing across the coupling membrane and resulting in a high yield of ATP. The term uncoupling is used concerning the situation when a proton bypasses ATP synthase and electron transport becomes disconnected from the process of ATP synthesis due to a short-circuit of the membrane potential existing across the membrane. It also applies to mitochondria, where uncoupling causes a loss of the tight association of oxidation of respiratory substrates and ATP synthesis [12][13]. Generally speaking, uncouplers exert their action by organizing a proton leak in the inner mitochondrial membrane, which jeopardizes the generation of the proton motive force [14]. Limited usage of uncouplers was announced as one of the most efficient strategies to coupe with different pathologies including aging [15]. In subcellular, cellular and organismal experiments, three uncouplers are the most widely used: DNP (2,4-dinitrophenol; active concentrations are in the region of 100 µM), CCCP (carbonylcyanide-3-chlorophenylhydrazone; active concentrations are about two orders less than of DNP), and FCCP (carbonylcyanide-4-trifluoromethoxyphenylhydrazone; active concentrations are at least one order less than of CCCP).

At the current level of our knowledge on the mechanisms of uncoupling, two modes are distinguished. According to the first mechanism, even uncouplers using a bilayer membrane provide a proton leak, causing a collapse of the proton gradient through the membrane [13][16]. Data in recent years indicate the existence of another mechanism involving special proteins in the coupling membranes that mediate the action of uncouplers [17][18][19][20][21]), while the number of nominal candidate proteins for the role is constantly increasing. It should be noted that there is a fundamental difference between these proteins and natural uncoupling proteins (UCPs) [22] , the functioning of which differ from those mentioned.

Meanwhile, the impression arises that moderate uncoupling unambiguously contributes to better resistance to various internal and external challenges, which may attribute this method of manipulating mitochondrial activity to a neuroprotective strategy. However, almost nowhere are the negative aspects considered, which should always be evaluated when using uncouplers in experimental and clinical practice, especially for brain pathologies. Previously, we have already given a similar assessment, weighing all the pros and cons of using mitochondria-targeted antioxidants [23], which we will do in this mini-review discussing beneficial and disadvantageous factors accompanying the application of uncouplers.

The oxygen molecule, even in its triplet state, is a quite strong oxidizer, which, when in the cell, can provide unnecessary oxidation of essential molecules, such as proteins, lipids, and nucleic acids. There is a point of view that the very appearance on Earth of oxygen-utilizing bacteria, and later mitochondria, was evolutionarily dictated by the oxygen menace [24] due to the rise in oxygen in the atmosphere, which was called the Great Oxidation Event or the Great Oxygenation Event [25]. Normally, the supply of oxygen to the cell does not limit the rate of its utilization [26], and the measured values of pO 2 in the brain do not limit the activity of cytochrome oxidase, which is the main consumer of oxygen in tissue. By definition, uncouplers activate mitochondrial respiration, thereby potentially they reduce the intracellular values of pO 2. In case it does not reach critical levels when oxygen concentration does not limit respiration, such lowering of intracellular oxygen and thus its toxicity may be considered beneficial.

Theoretically, the production of reactive oxygen species (ROS) is a first-order reaction for oxygen, but there are some indicative exceptions, especially in the range of low pO2 values in tissue when an increased generation of ROS is observed [27][28]. However, the generation of ROS non-linearly depends on the membrane potential (Δψ) built in the inner mitochondrial membrane, while reaching an exponential character at high values of Δψ [29][30]. Thus, even a small decrease in the Δψ can lead to a significant reduction in the generation of ROS, and thereby reduce the risk of unnecessary oxidation of important cellular components. This behavior of ROS generation by mitochondria allowed the development of a strategy for combating pathologies accompanied by oxidative stress through using mild uncouplers. These compounds uncouple the processes of mitochondrial electron transport and phosphorylation, but in a very modest fashion, only slightly reducing the membrane potential, ultimately maintaining the ATP at a level that adequately meets metabolic demands. To understand the quantitative relationship between the membrane potential of mitochondria and their ability to generate ATP synthase and produce reactive oxygen species, we performed a literature search and linked these three parameters on one single graph ( Figure 1 ). Although it is impossible to fully match the data available in the literature, first, in both cases, there is a sigmoid dependence of the formation of ATP depending on the membrane potential with the presence of some threshold values, after which, a significant increase in generation begins. Secondly, even in the absence of experimental data for the full range of membrane potentials, it is clearly visible that after 120 mV the ATP generation reaches a plateau. This means that it is possible to reduce the membrane potential without significant violation of the energy balance up to 120–130 mV. Obviously, this can be used to define the concept of “mild” uncouplers, limiting their effective action to the ability to reduce the membrane potential but keeping it not lower than 120 mV. In accordance with modern knowledge, in general, the uncoupling effect of uncouplers which are lipophilic weak acids (p K a ∼4–8), is determined by their ability to be protonated on the side of the membrane where the proton concentration is higher, and translocated to another side. There, after dissociation, the bound proton is released, and the uncouplers return to their original location in the anionic form. The limiting stage of this entire cycle is the transmembrane transport of this anionic form [16]. It is important for uncoupling, which occurs with the participation of fatty acids, for example, caused by derivatives of Skulachev ions having the properties of mild uncouplers [31][32][33]. Thus, the strength (activity) of the uncouplers is partially determined by the rate of transport of the anionic form [16] and uncouplers potentially can be softly divided into two groups: strong and mild (weak), quantitatively discriminated by the active concentrations, from nanomolar to millimolar. 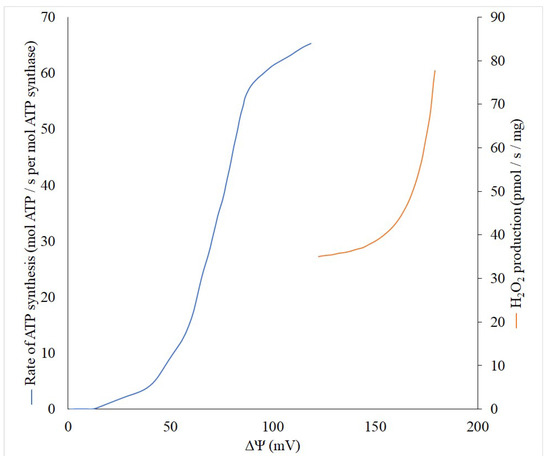 Figure 1. Dependence of the generation of ROS (red) and ATP (blue) on the values of the membrane potential (∆Ψ). ROS generation was measured on isolated rat brain mitochondria with α-ketoglutarate as a substrate (from [30], with modifications). Differences in membrane potential were generated by adding various concentrations of FCCP ranging from 0 to 80 nM. ATP generated was measured using reconstituted E.coli ATP synthase. K+/valinomycin diffusion potentials were applied in the presence of ΔpH (from [34] with modifications).

The activation of respiration caused by the use of uncouplers leads to increased mobilization of oxidative substrates and significant activation of oxidative metabolism, while, as the depletion of carbohydrate substrates occurs, the mobilization of fat resources takes place, which is desirable to combat obesity [34][35][36][37]. It should be noted that obesity is one of the risk factors for stroke, including in young adults [31]. Thus, therapeutic uncoupling can have an indirect neuroprotective effect through normalization of metabolism and improvement of the functioning of the cardiovascular system [38].

The function of ensuring mitochondrial quality control is directly related to this mechanism, which includes the step of transport into the mitochondria of elements that control the quality of mitochondria [49] and the degradation of poorly functioning or non-functioning mitochondria to preserve a young and healthy phenotype [50][51].

Although, as we have said, a large number of scientific teams are involved in studies of mitophagy over the world, some purely energetic elements of the process remain logically and actually unsupported and underexplored, and this primarily concerns the role of the mitochondrial membrane potential. The general statement about the mandatory presence of the mitochondrial membrane potential still stays. However, it is only qualitative in nature, while quantitative estimates of the necessary values of the membrane potential for mitophagy are practically absent. This differs the mitophagy process from ATP or peroxide generation presented in Figure 1 , where the threshold values, at which the processes practically do not occur, are obvious.

Our analysis, which can converge these two concepts, boils down to the fact that the second proposed mechanism is one of the examples of mitohormesis [60][61], stimulated by uncouplers. In this regard, a two-phase protective echelon can be implemented, which in the first stage, in the acute phase, reduces the high steady-state levels of ROS observed in the mentioned neurodegenerative states, but which can activate metabolism, with the possible short-term onset of near-ischemic states. These are accompanied by a short-term non-lethal increase in the level of ROS, triggering protective neuroprotective cascades, similar to those that occur during ischemic preconditioning [62][63][64][65].

The search for endogenous uncouplers has, so far, ended with the recognition that fatty acids and thyroid hormones can perform this function. This does not exclude mediators of the uncoupling process caused by uncoupling proteins (UCP 1–4, [22]), the full set of functions of which must be clarified, with the exception of UCP1, of which the main thermogenic function cannot be doubted. However, on the one hand, fatty acids can exhibit both direct uncoupling properties [66] or be mediators of transmembrane proteins: UCPs [67], translocator of adenine nucleotides (ANT) [68] and dicarboxylate carrier [18][69]. Other candidates for the role of an uncoupler, thyroxine and triiodothyronine (T3), have not been sufficiently investigated although in the last century there were indications of their uncoupling ability [70][71][72]. Among recent studies, work has demonstrated that T3 activates mitochondrial respiration via increased oxidation of fatty acids, while simultaneously enhancing autophagic flow and, in particular, mitophagy, deserves special attention [73]. The regulation of mitophagy by natural uncouplers (fatty acids and thyroxine) was also confirmed in experiments on cold exposure of animals, as a result of which the activation of mitophagy was observed in brown adipose tissue [74]. Later it was demonstrated that T3 stimulates brown adipose tissue through enhanced mitochondrial biogenesis and MTOR-mediated mitophagy [73].

Considering all these presented arguments, the extremely high metabolic activity of the brain requires a very careful approach for therapeutically induced manipulations, accompanied by an increase in the metabolism of neural cells, including neurons, astroglia, and endothelium. In general, the prevention of hypermetabolism of the brain is one of the immutable tasks that follows from knowledge of neuropathophysiology [75][76][77][78][79][80]. In general terms, this means that the therapeutic window of influence on brain metabolism is quite narrow, and if it is applied to uncouplers that increase metabolic activity, the therapeutic window of concentrations is also either very narrow or, due to its chemical nature, their uncoupling activity should be relatively small, accompanied by insignificant toxic properties.

More
© Text is available under the terms and conditions of the Creative Commons Attribution (CC BY) license (http://creativecommons.org/licenses/by/4.0/)
Upload a video for this entry
Information
Subjects: Neurosciences
Contributor MDPI registered users' name will be linked to their SciProfiles pages. To register with us, please refer to https://encyclopedia.pub/register :
Dmitry Zorov
View Times: 32
Revisions: 3 times (View History)
Update Time: 26 Aug 2021
Table of Contents
1000/1000
Hot Most Recent