Submitted Successfully!
Thank you for your contribution! You can also upload a video entry related to this topic through the link below:
https://encyclopedia.pub/user/video_add?id=13435
Check Note
2000/2000
Surveillance of Avian Influenza Viruses
Edit
Upload a video
This entry is adapted from 10.3390/vaccines8040694

The measures employed for curbing AI outbreaks and morbidities have played major roles in the journey towards global AI control. Although commendable progress has been made, more effective surveillance programmes, treatment regimens and prophylactic vaccines, which are capable of tackling the rapidly evolving AIV need to be developed. Effective control measures are the best option at preventing an AI panzootic which at present seems inevitable. To achieve this, AIV surveillance serves as an important tool for the understanding of the evolutionary patterns and epidemiology of AIVs.

AIV surveillance programmes in wild birds are essential because of their role as natural hosts for AIVs. The birds are suitable systems within which AIVs can evolve and circulate [1]. Apart from AIVs of the H17 and H18 subtypes found in bats, surveillance has shown that all other subtypes are perpetuated in wild birds, especially migrating aquatic birds [2][3]. However, the large population sizes and long-distance migrations of wild birds could be limiting factors to effective surveillance. As shown in Figure 1, certain criteria are considered in selecting a target sample population for surveillance, and these include: The population should have a history of AIV infection, the wild bird species should be one in which AIVs are prevalent, and the sample population should be one that is ecologically at risk of AI especially if environmental samples from their habitat are infected with AIVs [4]. 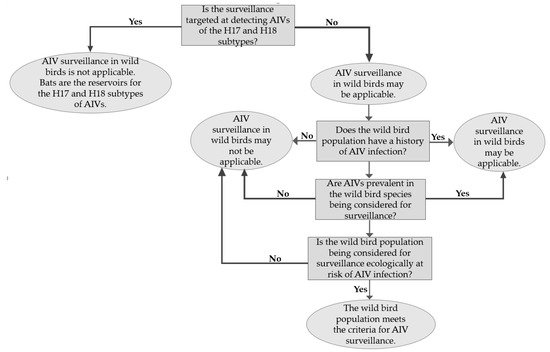 The objectives of AI surveillance in domestic birds vary among programmes. Surveillance programmes in developed economies are mainly focused on how AI affects the trade of poultry products, while those in developing economies are aimed at the effects of AI outbreaks on the development of their poultry industry [17]. Surveillance programmes in domestic birds are also adapted to the areas under study and the available resources. Furthermore, surveillance programmes in poultry have the common limitation of mostly focusing on the AIVs implicated in the most recent epizootics [12]. Consequently, this decreases the preparedness for tackling outbreaks by less recently encountered AIVs. Globally, AI surveillances in domestic birds from 2005 to 2010 were predominantly focused on monitoring the spread of HPAI H5N1 that was reported in over 60 countries in Africa, Asia and Europe [17][18]. HPAI H5N1 in domestic birds remains a global health burden for the severe economic losses incurred by poultry farmers and the threat of zoonotic transmission to humans. Early detection constitutes an important measure in the prevention of devastating AI enzootics [11]. As of 2010, 23 European nations, members of the World Organisation for Animal Health (OIE), had active HPAI and LPAI surveillances in domestic birds. These programmes are ongoing and are either locally funded or funded by the European Union (EU). The administrations of prophylactic vaccines against HPAI during the said period were reported in the Netherlands and Germany while LPAI preventive vaccine administrations were reported in Italy, Portugal, and France [17]. It is likely that less developed economies, especially those without access to EU funding, will be unable to effectively carry out AIV surveillance in domestic birds. This will consequently lower their ability for early detection and control of AI enzootics.
The first outbreak of HPAI H5N1 in Africa was reported in Nigeria in 2006 [19]. Locally performed surveillance studies reported no HPAI H5N1 outbreak from 2007 to mid-2008. However, HPAIV of clade 2.2.1 re-emerged in July 2008 [20]. As reported by the OIE, AI surveillance programmes in poultry in African nations in the 2005 to 2010 period, were performed as four separate projects. The first surveillance programme focused on four nations, the second focused on six nations, the third focused on 15 nations, and the most encompassing surveillance programme was carried out in 47 African nations. The major drawback of these surveillance programmes was that they only lasted from one to three years [17]. More recently, the administration of prophylactic HPAI vaccines to poultry birds in African nations is more widely practised. Despite the administration of prophylactic vaccines, HPAI H5N1 has remained enzootic in poultry birds in Egypt [21]. Since 2011, there has been no report of AI outbreaks involving H5N1 of the subclade 2.2.1.1. However, in 2014, H5N1 A/chicken/Egypt/Fadllah-7/2014 was isolated from symptomatic poultry birds in Egypt, and genetic analysis of the virus revealed ~98% similarity with the H5N1 strain of subclade 2.2.1.1 [22]. More recently, AI surveillance in Egypt from 2016 to 2018 showed that the AIVs of H9N2, H5N8 and H5N1 were still in circulation in domestic chickens and ducks [21]. While this shows the importance of continuous AIV surveillance in poultry, it highlights the need for a universal vaccine as strain-specific AI outbreaks are sporadic, and it is impractical to produce and administer protective vaccines against every AIV strain.
From 2005 to 2009, seven Asian nations reported HPAI outbreaks in poultry. Of these countries, China and Thailand reported having locally funded ongoing surveillance programmes [17]. China, Indonesia, and Vietnam reported having preventive vaccination programmes against HPAI in poultry [17]. In Malaysia, HPAI outbreaks were reported in poultry in 2004, 2006, and 2007. After a decade of no recorded outbreak, a re-emergence was reported in 2017. Inter-district spread of HPAI H5N1 in Malaysia is believed to be due to the smuggling of poultry birds, trading of poultry and poultry products, and infection from wild avian fauna [23]. AI surveillance was carried out in domestic waterfowl from 2007 to 2012 in Bangladesh. It was reported that 4.4% of the tested birds were shown to harbour the AIVs of H1N1, H1N3, H3N2, H3N6, H3N8, H4N1, H4N2, H4N6, H5N1, H5N2, H6N1, H7N9, H9N2, H11N2, H11N3, and H11N6. Interestingly, 99% of the AIV-positive birds were asymptomatic carriers, suggesting that they were vital for maintaining AIVs in circulation, which presented an imminent threat of an outbreak [24]. The effectiveness of bird culling, vaccination, and surveillance as control measures to curb AI transmission in Bangladesh was analysed. The ideal control measure was one that employed all three measures [25]. Furthermore, from the first LPAI H9N2 outbreak in China in 1994 and the first HPAI H5N1 outbreak in 1996, several outbreaks of these AIVs were recorded and they were described as being enzootic in China [26][27]. Also, novel reassortants of AIVs of the H5N6, H7N9, and H10N8 subtypes had been reported to be circulating in poultry birds in China [7][27]. The live animal market practices in China are believed to be the cause of keeping the AIVs in circulation [27]. Hence, consistent surveillance and control programmes are essential as the nation has been described as being geographically conducive for the emergence of novel AIVs [18]. In China, vaccination programmes to curb the spread of AIVs in poultry have been implemented. However, the vaccines have not been reported to completely eradicate the enzootic AIVs [28]. Strict restrictions on the live animal market practices may curtail the AIV circulation in China.

The first line of control during an AI outbreak is the culling of the infected birds, which is then followed by an antiviral treatment regimen [25]. Current AI treatments include antiviral agents that disrupt viral assembly, attachment, or replication, while other AI regimens act via RNA interference [29][30]. Antiviral agents such as amantadine hydrochloride have been effectively used in HPAIV H5N9-infected turkeys and H5N2-infected chickens. They disrupt viral replication by blocking the AIV M2 ion channel protein [31][32]. Although amantadine is suitable for all bird species, AIVs easily develop resistance to it and the drug residues are found in the meat and eggs of treated birds [30][33]. Some other antiviral agents such as oseltamivir and zanamivir, which inhibit the AIV NA protein, have been effective for AI treatment in chickens [34]. These NA inhibitors are effective against all AIV subtypes [35]. However, a prolonged administration is required for effective treatment of infected birds [30].
Interestingly, the use of herbs in the treatment of AI had also been demonstrated. Essential oils of eucalyptus and peppermint administered to H9N2-infected broilers caused a reduction in microscopic lesions in their trachea, and a significant decrease in mortality [36][37]. Chicken models were also protected after the administration of green tea extracts to birds challenged with H1N1 virus A/NWS/33 [38]. Furthermore, a Chinese herbal medicine, NAS preparation, protected H9N2-infected chickens from exhibiting symptoms. However, the treated chickens were still capable of transmitting the virus to healthy chickens [39]. Some of the studies tested the efficacies of these herbs on AIV-infected cell cultures. Leaf extracts of black currant (Ribes nigrum folium) were shown to prevent the entry of H7N7 and H1N1 AIVs into Madin Darby canine kidney (MDCK) cells [40]. Also, Isatis indigotica root extracts were shown to prevent viral attachment of H1N1, H3N2, H6N2, and H9N2 AIVs to MDCK cells [41].
More recently, avian cytokines had been employed in the treatment of AI. They showed broad-spectrum efficacy against various AIV subtypes and this efficacy was not affected by the antigenic shift of AIVs [30]. Treated birds were also reported to recover rapidly. On the other hand, the cytokines were unstable and as such, were not developed for field applications [35]. Also, the high cost of production was a limiting factor. Short interfering RNAs (siRNA) had been highlighted as a prospective AI treatment [30]. The advantage of siRNAs as a treatment regimen was their specificity to the virus for which they were designed. However, this specificity implied a lack of broad-spectrum for a wide range of AIVs. Also, they were quickly degraded by the host’s immune defence mechanisms [30][35].

More
© Text is available under the terms and conditions of the Creative Commons Attribution (CC BY) license (http://creativecommons.org/licenses/by/4.0/)
Upload a video for this entry
Information
Subjects: Virology
Contributor MDPI registered users' name will be linked to their SciProfiles pages. To register with us, please refer to https://encyclopedia.pub/register :
Abdul Razak Mariatulqabtiah
View Times: 47
Revisions: 2 times (View History)
Update Time: 23 Aug 2021
Table of Contents
1000/1000
Hot Most Recent