Submitted Successfully!
Thank you for your contribution! You can also upload a video entry related to this topic through the link below:
https://encyclopedia.pub/user/video_add?id=13280
Check Note
2000/2000
Antioxidants: Improving Food Shelf Life
Edit
Upload a video
This entry is adapted from 10.3390/polysaccharides2030036

Oxidation is the main problem in preserving food products during storage. A relatively novel strategy is the use of antioxidant-enriched edible films. Antioxidants hinder reactive oxygen species, which mainly affect fats and proteins in food.

Nowadays, one of the biggest challenges faced in the food industry is the rapid spoilage of foods [1]. Evidently, this problem results in a huge loss of money and large amounts of food in the world. Spoilage may be caused by three mechanisms named as the growth of microorganisms, oxidation, and enzymatic self-decomposition. The first mechanisms refers to the naturally occurring or externally added microorganisms, their growth and proliferation within the food [2]. Oxidation is the result of the action of reactive oxygen species (ROS) such as oxygen-containing free radicals (–O), hydroxyl radicals (–OH), and superoxide anions (–O2) that may react with lipids and proteins, leading to an oxidative state [2][3][4]. Enzymatic decomposition is caused by the enzymes present in plant or animal cells that break down the fats and proteins of the food. An alternative to counter these mechanisms is the addition of substances that may inhibit the oxidative spoilage before vital molecules may be damaged. These substances are known as antioxidants, and are capable of hindering the effects of the ROS, either avoiding the chain chemical reactions or neutralizing the ROS [5]. There are natural and synthetic antioxidants, but the latter have been related to possible harm to human health [6][7]. Naturally occurring antioxidants are classified according to the chemical structure in carotenoids, vitamins, polyphenols, quinones, and minerals. Unfortunately, exposure to atmospheric air causes natural antioxidants to break down quickly, losing their properties and limiting their antioxidant activity [8][9][10][11]. One strategy to prolong their effect is through microencapsulation with carrying agents. These agents are based on carbohydrate polymers, which in turn are made up of polysaccharide chains such as glucose and fructose [12][13][14].
Several authors have discussed different methodologies for obtaining edible films such as wet (casting) and dry (extrusion) processes, and classified the films into edible coatings (applied directly to the food product), and preformed films (which wrap the product) [15][16]. They addressed the challenges faced by food manufacturers in relation to the loss of quality during storage, the subsequent deterioration, and the increase in waste. Although the packaging is an alternative to protect the quality of food, improve its shelf life, delaying microbial deterioration and providing barrier properties against moisture and gases, typical polymers used for this purpose may represent a risk for human health, as migration of molecules such as additives into the food from the polymeric matrix may occur. Another disadvantage is the environmental mark left by the plastic coating once it is disposed as solid waste. In consequence, this methodology is not environmentally friendly. Due to the above, several efforts have been made in order to substitute the traditional polymer packing by more environmental friendly materials such as biopolymers [17][18][19]. In this sense, a potential alternative to solve this problem with a low impact on the environment is the use of edible films made from natural polymers such as polysaccharides, proteins and fats [20][21][22][23][24][25].

As mentioned, food can deteriorate due to several factors such as oxidation, which may be caused by the effects of UV light, ambient or cooking temperature and agrochemical residues. Proteins, lipids and sugars contained in food can suffer deterioration due to oxidation. Apart from the effect on the appearance and the loss of nutritional value, foods that have undergone oxidative processes can be harmful to health [12][26]. One of the main problems of the deterioration of beef, fish, and their derivatives, is the oxidation of lipids and proteins, which is produced by the uncontrolled generation of free radicals and reactive species [27]. These changes cause a deterioration in quality in terms of taste, color, texture and nutritional value. Additionally, it is very important to know the oxidation mechanism of fats and proteins, and their relationship with the majority component of foods, for example, proteins, lipids, and carbohydrates, in order to predict the oxidation rate and shelf life of the product.
For lipids or fats, Jackson, et al. [28] conducted a study on the effect of oxidized lipids on health, specifically to set a relationship between the intake of oxidized lipids and the risk of developing chronic diseases. They suggested that the processes that include antioxidants to preserve food must be studied to confirm that they promote health and reduce the risk of developing diseases. Maldonado-Pereira et al. [29] studied the oxidation of cholesterol and its effect on food toxicity. They reported that there is abundant scientific evidence regarding the correlation between the consumption of cholesterol oxidation products and the risk of developing cancer and degenerative neurological diseases. Kato, et al. [30] published a methodology based on chromatography and mass spectroscopy in the quantification of the degree of oxidation in lipids, with greater sensitivity than that measured with the traditional method of the peroxide value (POV). They found that the phootoxidation of lipids produces peroxides on unsaturated carbons different from those obtained by thermo-oxidation. Waraho et al. [31] studied the reaction mechanisms in the oxidation of lipids in emulsion foods, such as dairy products. They found that some sugars such as hexose and pentose might act as pro-oxidants of lipids in emulsions. Additionally, because of the different characteristics of surfactants and emulsifiers, they suggested the use of antioxidants to reduce the possible oxidation and rancidity of emulsified products. Figure 1 and Figure 2 describe the oxidation reaction mechanism by hydroxyl radicals of an unsaturated lipid (L). The hydroxyl radical causes the homolytic cleavage of the hydrogen bond of the sp2 carbon, giving rise to a lipid radical •L. The lipid radical reacts with an O2 molecule to form a lipid-peroxide radical (LOO•). This reactive species can propagate lipid oxidation by taking hydrogen from another molecule and forming the lipid-hydroperoxide species (LOOH) and a new lipid radical susceptible to oxidation. It can also happen that two lipid radicals react with each other, leading to lipid crosslinking (Figure 2) [32]. 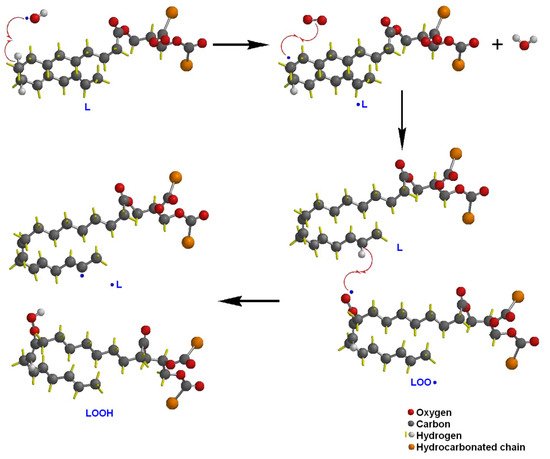 Figure 2. Lipid crosslinking mechanism from the reaction of two lipid radicals.
For proteins, Estévez and Luna [33] studied the effects on health due to the oxidation of proteins in food. They mentioned that some proteins or oxidized amino acids consumed in food can induce cellular malfunction, both due to a deterioration in self-regulation of the organism (homeostasis) and programmed cell death (apoptosis). Hellwig [34] carried out an extensive review on the oxidation mechanisms of proteins in food. Among the main sources of oxidizing species, he included ultraviolet light and transition metals such as iron. In addition, some polyphenols that inhibit lipid oxidation can act as pro-oxidants in proteins, but that this effect can be controlled with low concentrations of antioxidants. The oxidation mechanism in proteins is described in Figure 3. A reactive oxygen species can react with an amino acid chain (P) by reacting with hydrogen from one of the carbons, thus forming a free radical in the chain (•P). This radical reacts with an oxygen molecule forming a protein-peroxide radical (POO•) which in turn can react with hydrogen from another chain of amino acids creating a hydroperoxide (POOH) and a new free radical. The reaction between two protein radicals leads to the cross-linking of amino acid chains as shown in Figure 4 [35]. 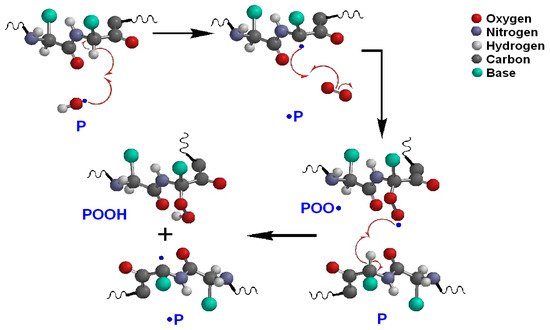 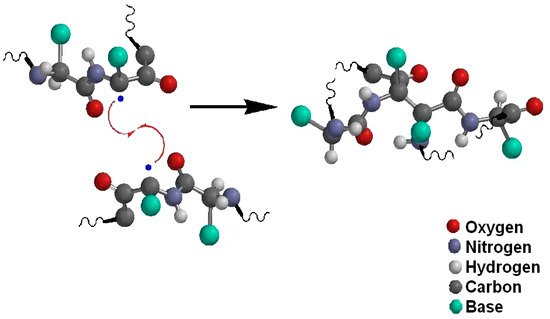 Figure 4. The cross-linking of amino acid chains by the reaction of two protein radicals.

In general, antioxidants refer to a wide range of substances that can be divided into endogenous or exogenous. Oroian and Escriche [36] classified the antioxidants mainly in vitamins (vitamins C and E), carotenoids (carotenes and xanthophylls), and polyphenols (flavonoids, phenolic acids, lignans and stilbenes). On the other hand, Carocho et al. [5] categorized the antioxidants by the most important groups, taking into account their properties, function and applicability in the industry, emphasizing polyphenols and the different groups of carotenoids, within natural antioxidants. Another way to catalog antioxidants is in terms of their solubility, which can be soluble in lipids/fats (hydrophobic) and water (hydrophilic). Both are necessary to protect cells, since the interior of cells and the fluid between is composed of water, while cell membranes are mostly made up of lipids. Because free radicals can attack any part of the cell, both types of antioxidants are needed to ensure the complete protection against oxidative damage [37]. A more precise definition of antioxidants is referring to the substances with the ability to hinder ROS or nitrogen species (RNS), in order to inhibit or stop the propagation of oxidative chain reactions before vital molecules may be damaged [5].
Plenty of the research regarding antioxidants of natural origin is focused on the relationship between human health and the intake of foods containing antioxidants [32][38][39]. Others are related to the extraction of bioactive molecules and their incorporation into food supplements or drugs in order to act in the body more efficiently [36][40]. Antioxidants can also be classified based on the reaction mechanism [41]. For example, antioxidants can neutralize the action of reactive species in cell membranes, through three mechanisms names ad (i) hydrogen atom transfer (HAT), (ii) single electron transfer (SET), and (iii) the ability to chelate metals from transition metal. In this sense, HAT mechanism is based on the ability of an antioxidant (HA) to hinder free radicals such as the peroxyl radical –ROO, by donating a hydrogen atom, stabilizing the peroxyl radical by resonance, according to the Equation (1) [42]:

While the SET mechanism is based on the ability of an antioxidant (HA) to transfer an electron to decrease free radicals, pro-oxidant metals such as Fe2+ and Cu2+, and carbonyls (Equations (2)–(4)). This mechanism depends on the solvent and pH:

Carotenoids are antioxidants found in foods such as carrots, pomegranates, and grapefruit, while tocopherols are present in oilseeds and green leafy vegetables, and ascorbic acid is found in citrus fruits [43]. Another example of phytochemical antioxidants is flavonoids, which have one of the most diverse groups of compounds present in food. According to the chemical structure, they are divided into six classes which are: flavanols, flavonones, flavones, flavonols, isoflavonoids and anthocyanidins. Because they can cross the blood-brain barrier and reduce oxidative stress in that area, their beneficial health effects include the anti-inflammatory effect, and the prevention and delay of the progression of chronic neurodegenerative diseases [44].
Regarding food preservation, the most studied antioxidants of natural origin are vitamins (tocopherols and ascorbic acid), stilbenes (resveratrol), and polyphenols (gallic acid and quercetin), as well as plant extracts (spices, leaves and fruits) that are a mixture of antioxidant molecules from various families, mainly polyphenols. Table 1 describes the type of antioxidant, description and natural source, applied research in the preservation of food and reference.
Table 1. Summary of the major findings of the applied research in the use of antioxidants for the preservation of foods.