Submitted Successfully!
Thank you for your contribution! You can also upload a video entry related to this topic through the link below:
https://encyclopedia.pub/user/video_add?id=13164
Check Note
2000/2000
Sulfide Solid-State Electrolytes
Edit
Upload a video
This entry is adapted from 10.3390/electrochem2030030

Sulfide solid-state electrolytes are particularly promising for the development of high-energy all-solid-state Li metal batteries because of their high ionic conductivity and deformability. However, their unstable interface and interphase formation with electrode materials remain a great challenge.

For decades, rechargeable lithium-ion batteries (LIBs) using organic liquid electrolytes have been commercially used as a power source for portable electronic devices [1][2][3], and their use has recently expanded to mid–large-scale electrochemical energy storage applications, including electric vehicles (EVs) and grids [4][5]. For the success of EVs, battery technology must surpass the current limitation of driving ranges by achieving a larger capacity. According to a global technical goal for 2030, the specific energy of secondary batteries must reach 500 Wh kg−1, which is much higher than the 246 Wh kg−1 of today’s typical EV batteries used in the Tesla Model 3 [6][7][8][9]. To achieve such a high energy density, a Li-metal anode is considered to be an unrivaled component, owing mainly to its extremely high theoretical specific capacity (3860 mAh g−1) and lowest reduction potential (−3.040 V vs. the standard hydrogen electrode). Safety issues have become more important than ever as battery sizes have increased. However, current LIB technology using liquid electrolytes cannot meet the requirements for the use of a Li-metal anode or safety [10][11].
In this respect, all-solid-state batteries (ASSBs), which use inorganic solid-state electrolytes (SSEs) instead of flammable organic liquid electrolytes, have emerged as promising alternatives to conventional LIBs. SSEs offer several advantages over conventional liquid electrolytes. First, ASSBs are stable even in extreme environmental conditions such as high pressure, temperature, overcharge, or external shock, and there is much less risk of ignition or explosion [12][13]. Second, it is believed that ASSBs can use a Li-metal anode since the sufficient stiffness of SSEs can mitigate the internal short circuit by suppressing the Li dendrite growth during the electrochemical cycles [14]. Third, the volumetric energy density can be improved by reducing its volume since there is no need to pack each cell and a simpler design through bipolar stacking is available for ASSBs [15][16]. Despite these advantages of ASSBs, important challenges remain to be addressed. Many SSEs display lower ionic conductivity at room temperature when compared to liquid electrolytes. Moreover, it is difficult to ensure the ion-transfer channel between the SSE and electrodes because of their unstable interfaces.
Of the various kinds of SSEs, sulfide SSEs have attracted significant attention due to their high ionic conductivity (10−2–10−4 S cm−1), which is comparable to that of organic liquid electrolytes [11][17][18]. Figure 1 summarizes the ionic conductivities of sulfide SSEs. Although the high ionic conductivity and deformability make sulfide compounds promising SSEs, several important challenges remain. Sulfide SSEs have an intrinsically narrow electrochemical stability window, which results in undesired (electro)chemical reactions between the sulfide SSE and electrodes during battery cycling [19], forming unstable interphases. Such interphase formation leads to operation failures of ASSBs. Therefore, considerable efforts are now focused on improving the interfacial stabilities between sulfide SSEs and electrode materials. 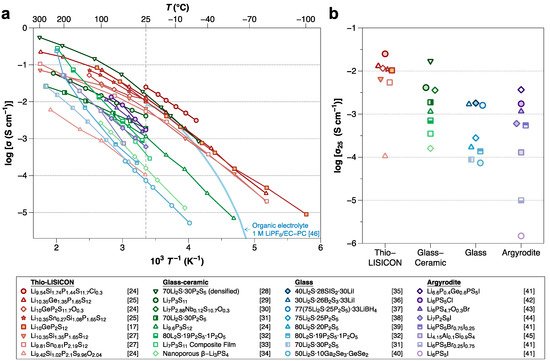 Figure 1. (a) Arrhenius-type plot of ionic conductivity for sulfide SSEs reported to date (as of February 2021). (b) The magnified view compares the conductivities at room temperature by their structure [17][20][21][22][23][24][25][26][27][28][29][30][31][32][33][34][35][36][37][38][39][40][41]. Note that the light blue line is a curve from organic liquid electrolytes of 1 M LiPF6/EC-PC (50:50 vol%) for comparison [42].
In this review, we present an overview of the limitations and recent achievements in the development of sulfide SSEs, with a particular focus on the stability issue of sulfide SSEs with lithium-metal anodes and various cathode active materials. We will not discuss the conductivities of sulfide SSEs, as this topic is already well documented in previous review articles [11][43][44][45][46]. We further discuss recently proposed techniques to achieve a favorable interface between sulfide SSEs and electrodes in ASSBs. This review aims to provide not only a comprehensive description of the developments of sulfide SSEs but also insight into potential directions of future research. 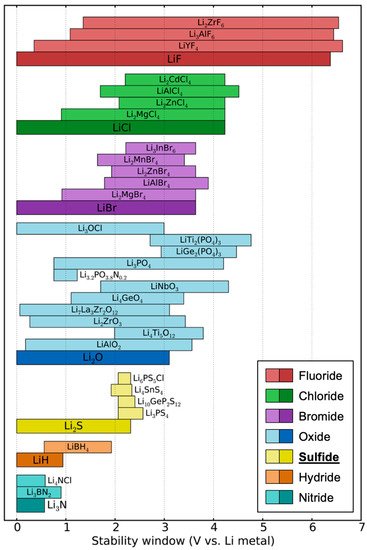 More
© Text is available under the terms and conditions of the Creative Commons Attribution (CC BY) license (http://creativecommons.org/licenses/by/4.0/)
Upload a video for this entry
Information
Subjects: Engineering, Chemical
Contributor MDPI registered users' name will be linked to their SciProfiles pages. To register with us, please refer to https://encyclopedia.pub/register :
Haegyeom Kim
View Times: 73
Revisions: 2 times (View History)
Update Time: 16 Aug 2021
Table of Contents
1000/1000
Hot Most Recent