Submitted Successfully!
Thank you for your contribution! You can also upload a video entry related to this topic through the link below:
https://encyclopedia.pub/user/video_add?id=1314
Check Note
2000/2000
Parallelism Measurement Methods
Edit

At present, the parallelism error was evaluated by contact probe, laser interferometer, and  autocollimator, etc. Moreover, it can also be divided into contact method and non-contact method based on the measurement principle.

The contact method was carried out mainly by dial indicators or contact probes. The parallelism was measured by contacting the surface directly.

1.1 Evaluation of parallelism by thickness difference

1.2 Calculation of parallelism by measurement algorithm

The contact method is suitable for measuring the parallelism of small and medium-sized non-transparent workpieces, machine tool guideway or carriages and the spindle of the work head. It′s accuracy is related to the displacement sensor and data processing methods. The contact method can ensure stability in complex measurement environments [8], and comprehensively consider the impact of the initial state of the workpiece surface and the equipment movement error. The measurement accuracy can reach sub-μm level.

The non-contact method mainly uses interferometer, autocollimator or design a special light path to measure the parallelism error of the workpiece. The measuring device can perform parallelism measurement without touching the workpiece through the conversion of optical signals (movement of interference fringes, changes in light phase differences, movement of light focus points, etc).

An interferometer is a geometric measurement instrument that can measure multiple parameters such as linear positioning, straightness, perpendicularity, parallelism, and angle. For the measurement of transparent workpieces. The basic principle of is that the laser light source enters the rhombic beam splitting prism to form a parallel beam, which irradiates the two surfaces of the workpiece, the two surfaces with parallelism errors change the optical path and produce interference phenomenon. The parallelism of the workpiece is measured by analyzing this phenomenon [9][10][11][12][13][14].

Autocollimator is a kind of measuring instrument that uses the principle of autocollimation to convert angle measurement to linear measurement. It is widely used in the measurement of angle, parallelism and flatness. In this method, the light passes through the objective lens to form parallel light. The side of the plate under test that is perpendicular to the optical axis is used as the incident front surface, and the parallel beam is incident perpendicularly, the two parallel beams of light are reflected from the front and back surfaces of the plate, if there is a parallelism error between the two surfaces of the plate, there will be an angle between the two parallel beams of light reflected. The focus formed on the focal plane after the reflected light passes through the objective lens will move, and the amount of focus movement is the parallelism of the two surfaces of the workpiece [21][22][23][24]. 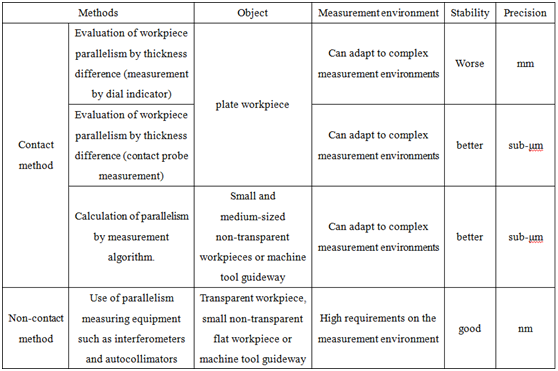