Submitted Successfully!
Thank you for your contribution! You can also upload a video entry related to this topic through the link below:
https://encyclopedia.pub/user/video_add?id=13027
Check Note
2000/2000
Rotating Packed Beds
Edit
This entry is adapted from 10.3390/su13148046

In this study, a comprehensive review was conducted of the process intensification equipment used for gas absorption processes, which are known as rotating packed beds (RPB) or HiGee contactors. Using centrifugal acceleration in RPBs intensifies the MT coefficient, and this leads to a reduction in the packing volume and energy consumption in comparison with packed beds. The gas velocity and flow area change radially in RPBs; therefore, MT coefficients change from point to point in contactors, but there is no general theory for this, and the prediction of MT coefficients in RPBs is theoretically complicated.

Process intensification (PI) is defined as an engineering application utilized to improve sustainability, cleaning, safety and energy efficiency. PI in mass transfer (MT) involves three main methods: rotating, mixing, and vibrating [1]. There are good reviews available on PI that provide more details on this topic [2][3]. Researchers have been using the advantages of centrifugal fields for more than 65 years [4]. A rotating packed bed (RPB) contactor is a piece of PI equipment, also called a “HiGee” (high g) because of the high gravity applied in this contactor by the centrifugal force used for increasing the contact of phases [5]. This device was first patented in 1963, and includes concentric rings for packing purposes [6]. Industrial applications of this equipment started in the 1970s when Imperial Chemical Industries worked on technology derived from NASA research projects [7]. Almost a decade later, Ramshaw and Mallinson presented a report on NH 3 absorption and MT coefficient intensification using an RPB for the first time [8]; later, this technology was licensed by Glitsch in the USA [9]. Investigations into and the development of RPBs were have been out by numerous researchers in many MT and reaction fields, such as distillation. Several kinds of RPB have been reviewed and their advantages discussed in [10], while the results and some of their industrial applications are presented in [11].

As CO 2 emissions are now a global concern, investigations in this field employ three main approaches: post-combustion, oxy-fuel combustion, and pre-combustion for CO 2 capture [12][13]. Chemical absorption has been applied and developed more extensively in post-combustion than in other industrial processes [14]. Therefore, a large amount of waste is produced by the use of certain conventional gas treatment packed bed columns (PBCs), and this approach requires high quantities of absorbent solvents in order to prevent hydrate formation with the small quantities of other components, such as CO 2 and H 2S. The most common acidic gas removal problems include absorption heat, high energy consumption for regeneration, and amine solutions’ corrosive nature and temporal degradation [15][16]. The previous field studies on chemical absorption will be explained, along with some brief examples, below. Absorbent formulation, in which a highly soluble, reactive, absorbent, and aqueous solution of alkanolamines is made and blended by adding activators or promoters, such as sterically hindered amine AMP , and effective promoters, such as PZ . Process intensification involves the application of PI techniques or devices and optimization parameters. This category contains many techniques that can be considered to enhance transport in numerous processes, such as bioremediation [17], water deaeration [18], and absorption. As regards devices, many popular contactors are available, such as rotating discs, membranes, and RPBs.

For instance, Hosseinzadeh et al. [19] examined CO 2 capture with a hallow fiber membrane contactor (HFMC), using MEA to increase the chemical reaction rate and the contact of phases. M. Theils et al. [20] performed a comparison between several arrangements of PBs and RPBs, and demonstrated that reducing the packing volume in the RPBs resulted in equal removal efficiencies. Additionally, this kind of method is applied in many fields, and the simultaneous application of the above two intensifying absorption methods (a and b) can offer advantages such as energy reduction in thermal regeneration using an RPB on MEA –CO 2 system, as reported by Cheng et al. [21]. Their results show that the same regeneration efficiency in PBCs could be achieved with RPBs that were at least 10 times smaller than the PBCs, and they demonstrated that RPBs had higher MT and heat transfer coefficients and involved less HTU and regeneration energy consumption. Other benefits of this approach have also been reported. An investigation into CO 2 capture with water-based NFs (absorbing solutions) in HFMC revealed possible enhancements to MT and removal efficiency [22]. In addition, Luo et al. [23] reported that the relative effective gas–liquid interfacial surface area and volumetric liquid-side MT coefficient were both increased when using ultrasonic induction, in comparison with an RPB without ultrasonic induction under the same conditions. These approaches, referred to as hybrid processes, have been further discussed in [24].

In the first section, the main concepts, such as the advantages of centrifugal gravity, the geometry and classification of RPB, the directions of investigations (i.e., hydrodynamic and mass transfer enhancement) and modeling outlooks, are described. In the second section, the modeling of hydrodynamic parameters and their development to attain accurate systems are analyzed. In the third section, the developments in the modeling of MT’s parameters as regards its rate are studied. Finally, in the last sections, two powerful methods suitable for hydrodynamic analysis and scaling-up, as well as the effects of centrifugal gravity on the dimensionless numbers that form the main focus of this analysis, are reviewed and evaluated. Here, all the above-mentioned items are reviewed simultaneously, because no previous review has evaluated all the parameters that together characterize the RPB.

An RPB contactor consists of packing mounted on a horizontal/vertical shaft (rotor), casing, and a liquid distributor. A simple conventional RPB is made up of a rotor enclosed in casing, with a liquid distributor that injects liquid into the packing center. The packing is divided into three zones: the bulk packing, the end-effect (the part near the inner edge of the rotor), and cavity zones, which are between the outer edge of the packing and the inner edge of the casing [25]. The acceleration in RPBs (typically 1000 g) is greater than that in PBCs, which allows for improved micro-mixing, as demonstrated, for instance, by the experimental results of Yue’s investigation of an RPB [26]. The high gravity leads to higher gas–liquid interfacial surface area accessibility in RPBs, compared with conventional PBCs.

Generally, RPBs can be classified according to six criteria, as shown in Figure 1 . 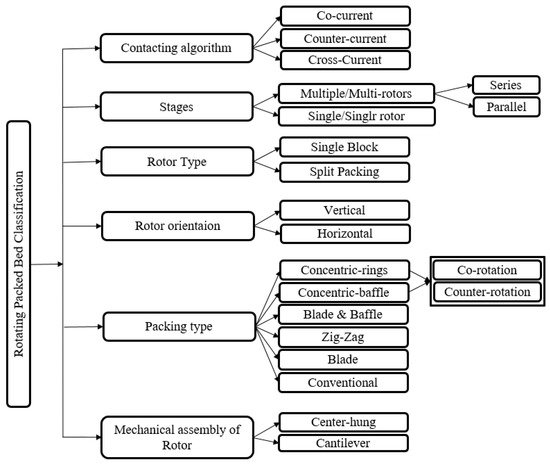 The disadvantages of this kind of RPB in comparison with simple RPBs include a lower MT rate, which is attributed to the replacement of packings with baffles and rings, and higher power consumption.

RPBs equipped with blades and RPBs with a number of liquid inlets have greater MT efficiency than simple RPBs due to the intensified MT rate in their end-effect zone, as Guang-Wen Chu et al. reported [27].

Sang et al. [28] analyzed fluid patterns in RPBs with high-speed photography. They found that the liquid flow would take the form of ligaments, which exited the packing at lower rotational speeds (pore flow) and grew in numbers at higher speeds, then finally disappeared. Drawing on the results of their study, they categorized liquid patterns into ligament or pore flows and droplet flows, suggested six parameters that affect the flow regime, and proposed a criterion to determine the regime based on the relation between the Re and We numbers via the new dimensionless number of q, which is defined by the liquid’s initial velocity, the annular speed, and the outer rotor diameter.

In this study, a comprehensive review was conducted of the process intensification equipment used for gas absorption processes, which are known as rotating packed beds (RPB) or HiGee contactors. Using centrifugal acceleration in RPBs intensifies the MT coefficient, and this leads to a reduction in the packing volume and energy consumption in comparison with packed beds. The gas velocity and flow area change radially in RPBs; therefore, MT coefficients change from point to point in contactors, but there is no general theory for this, and the prediction of MT coefficients in RPBs is theoretically complicated. Past investigations have shown that the local KGa in the end-effect zone is higher than the value of this coefficient in the bulk zone of the packing, and the MT coefficient strongly depends on the hydrodynamics of two phases. Therefore, further evaluation of this subject is necessary to improve and optimize RPBs. Previous studies have shown that MT coefficients are increase by reductions in boundary layer thickness, as a result of which the HTU will be decreased. Then, the liquid hold-up and pressure drop in RPBs were investigated. Past researchers have demonstrated that suitable dimensionless numbers, such as Re, Ga, and Ka, make hold-up predictions more accurate. Research results have shown that pressure drops are mainly related to the outer radius of the RPB and its packing type. Moreover, a suitable estimation of pressure drop can be achieved using the channel model. Moreover, by adding blades and baffles, one can reduce the total pressure. Unlike in PBCs, the effective MT surface area is not equal to the wet surface area or total surface area in RPBs. A contact area covered by flying droplets, which can be defined by the We number, affects the size of the effective surface area in RPBs. Previous studies have demonstrated that, in addition to the packing type, a good distribution of the fluid increases the effective surface area in the cavity and packing zones, and is considered as a parameter that effects flooding. The dimensionless numbers that affect MT description correlations are Re, Gr, Sc, Fr and We, which were recently improved by adding the geometry factor. The MT rate can be changed locally via the alteration of the flow area, gas, and liquid velocity. CFD and dimensional analysis are efficient tools for studying the RPB. CFD is a suitable tool for surveying hydrodynamic details and the MT rate. The results reveal that, for the achievement of maximum accuracy in the modeling of RPB in the gas–liquid transition process, one can use innovative models that use CT reconstruction for the generation of packing geometry, the VOF model for two-phase modeling, and the realizable k-ε turbulence model for hydrodynamic analysis. Dimensional analysis is an efficient method for the scaling up and benchmarking of RPB systems.