Submitted Successfully!
Thank you for your contribution! You can also upload a video entry related to this topic through the link below:
https://encyclopedia.pub/user/video_add?id=1301
Check Note
2000/2000
Luso-Flemish Master of Lourinhã
Edit
Upload a video

The Master of Lourinhã masterpieces are the best that Renaissance painting produced in Portugal during the governance of King D. Manuel I, in the Luso-Flemish period. The paintings were commissioned c. 1515 by Queen D. Maria, second wife of King D. Manuel I. Its underdrawing, the fineness of the landscapes and the transparency of chromatic material, reveal the talent of a great artist following Bruges and Antuerpian models.

The painting collection of the Santa Casa da Misericórdia da Lourinhã (SCM Lourinhã) is one of the most remarkable and little-known elements of cultural heritage of Portugal. The artistic interest of this pictorial group, together with the advanced state of degradation of some paintings and the ruined conditions of the building that houses the collection, currently under reconstruction, were the main reasons for this study. The main objective of this work is to reveal knowledge about this important part of national heritage, their authors and their workshops, by studying the artistic and material characterization and the state of conservation of this collection. Such a methodology of research on materials and its conservation contributes to the safeguarding and consequent awareness of the endangered cultural heritage of the community.

The research on the two Renaissance paintings representing “São João Baptista no Deserto” (P1) and “São João Evangelista em Patmos” (P2) (Figure 1), originally from the extinct Hieronymite Monastery in Berlengas Island (Peniche, Portugal), is enough to credit the artistic qualities of the collection and to justify the urgency of an integrated project study, conservation and musealization. The paintings were transferred from the Convent in Berlengas Island, still in the 16th century, to the monastery of Vale Benfeito (Óbidos), when this monastery was abandoned due to its inhospitality. The painting collection was later deposited in Santa Casa da Misericórdia da Lourinhã during the exclaustration of Vale Benfeito monastery. 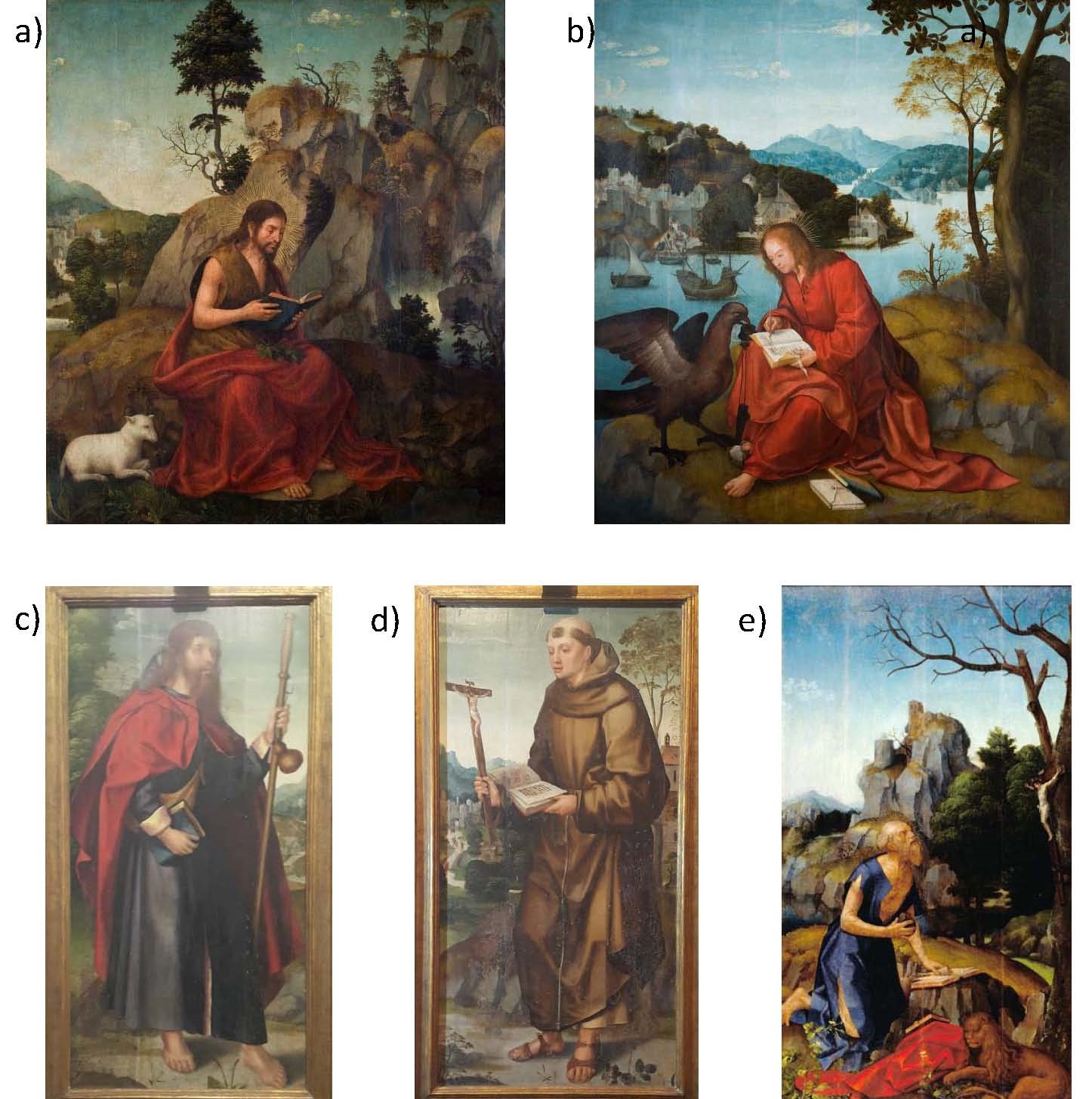 These masterpieces are the best that Renaissance painting produced in the governance of King D. Manuel I in the Luso-Flemish period. The paintings were commissioned c. 1515 by Queen D. Maria, second wife of King D. Manuel I. The underdrawing, the fineness of the landscapes and the transparency of chromatic material, reveal the talent of a great artist following the Bruges and Antuerpian models. Brought to light by Luís Reis-Santos in 1937 while visiting the Santa Casa da Misericórdia da Lourinhã, these panels are due to an artist who has taken since then the name of Master of Lourinhã [1], an epithet that brings together a series of 30 royal paintings in the same Luso-Flemish manner [2][3][4]. In this research, the material and technical results on the two Lourinhã paintings are compared to the other two unstudied paintings from the former Cabo Espichel chapel, “S. Tiago” (P3) and “Sto. António” (P4) assigned to the same master, and to other paintings such as Penha Longa (Sintra), “S.Jerónimo”(P5) (Figure 1), the Funchal Cathedral (Madeira island) altarpiece collaborative work, and also to the work of Frei Carlos, to whom the Master of Lourinhã paintings were formerly assigned. Considering that this study concerns cultural heritage artifacts, the analytical techniques employed were useful to derive important non-destructive and non-invasive measurement information on the elemental composition of the materials used by color, specifically addressing X-ray fluorescence spectroscopy (XRF) analysis. These results were crucial to define the sampling areas, avoiding overpaintings. The elementary analysis was complemented by sampling the main colors pallete for each painting, and performing scanning electron microscopy–energy dispersive spectroscopy (SEM–EDS) in cross-sections, allowing us to understand elementary distribution through layers. This technique was also useful to recognize the distribution of the grains, their morphology, and the granulometry of the ground layer through backscattered electron images (BSE). Ground layer study was essential to determine the material and technical tendencies followed by the artist [2]. Compound analysis on this layer was performed by micro-Raman technique, complemented by micro-X-ray diffraction (micro-XRD) whenever needed, to clarify the relative proportion of gypsum/anhydrite facing a calcium carbonate upper layer (P5).In order to understand stratigraphic layering by color, optical microscopy (OM) was used, and micro-images were taken to compare layering technique by color and by painting. Afterwards, the painting components for each layer were analyzed by micro-Raman technique, in order to recognize the compounds and their state of conservation. These analyses were confirmed by micro-FTIR when hardly identified by the micro-Raman technique, as with the carbon black or the green pigments, a difficulty already noticed by other studies on historical samples [3][4]. Area infrared photography (IRP) and infrared reflectography (IRR) exams were useful to observe carbon density in drawing by technique and painting, and comparing between paintings, since the same equipment and performance levels were used. These area exams also allowed us to distinguish different underdrawing technique for each painting and permitted the comparison between the paintings. The outcomes achieved by the combination of different analytical procedures unveil the materials and the techniques of the unknown Luso-Flemish painter Master of Lourinhã and bring information on materials conservation, an essential issue concerning cultural heritage preservation.

In conclusion,the “Master of Lourinhã” hatching technique in miniaturist style may be correlated to Flemish illumination practices, such as in its aesthetic values, based on Flemish prints and illuminated books. Also the painting of miniature figures are the closest possible relationship between the artist’s painting technique and manuscript illumination.

The “Master of Lourinhã” rise of individual drawing is worthy of notice, highlighting an elaborate system of sketching.

Colouring materials used and its transformation by the artist allowed characterizing the workshop palette: lead white, malachite, vermilion, lead-tin yellow, ochre and azurite. The characterization of the palette and ground layers and the study of the overlapping of pigment layers unveil materials and techniques of the unknown luso-flemish “Master of Lourinhã”.

More
©Text is available under the terms and conditions of the Creative Commons-Attribution ShareAlike (CC BY-SA) license; additional terms may apply. By using this site, you agree to the Terms and Conditions and Privacy Policy.
Upload a video for this entry
Information
Subjects: Others
Contributor MDPI registered users' name will be linked to their SciProfiles pages. To register with us, please refer to https://encyclopedia.pub/register :
vanessa antunes
View Times: 378
Revisions: 5 times (View History)
Update Time: 29 Oct 2020
Table of Contents
1000/1000
Hot Most Recent