Submitted Successfully!
Thank you for your contribution! You can also upload a video entry related to this topic through the link below:
https://encyclopedia.pub/user/video_add?id=12975
Check Note
2000/2000
Trichostatin A
Edit
Upload a video
This entry is adapted from 10.3390/ijms22157817

Trichostatin A (TSA) is a representative histone deacetylase (HDAC) inhibitor that modulates epigenetic gene expression by regulation of chromatin remodeling in cells.

The CRISPR/Cas system is an efficient genome editing technology following meganucleases, zinc-finger nucleases (ZFNs), and transcription activator-like effector nucleases (TALENs) [1][2][3]. The CRISPR/Cas9 system, consisting of the Cas9 protein derived from Streptococcus pyogenes and gRNA, is the most widely used system based on RNA-guided interference with DNA [4]. The gRNA is a small RNA that contains 20 nucleotides complementary to target sequences and an artificial fusion of a crRNA and a fixed transactivating crRNA for recruiting the Cas9 protein to direct the cleavage of DNA sequences adjacent to 5′-NGG-3′ protospacer-adjacent motifs (PAMs) [5]. As a result, the Cas9 protein cleaves the target region in a sequence-dependent manner, and a double-strand break (DSB) is generated and repaired in that region, resulting in genome modification.
The CRISPR/Cas system is actively used for genome editing in a variety of species, including plants [6][7][8]. In particular, the Cas9 protein-gRNA ribonucleoproteins (RNPs) system has received attention for its ability to reduce the possibility of the insertion of recombinant DNA into the host genome [9]. Advances in CRISPR/Cas genome editing have accelerated the improvement of crop traits and have produced transgene-free genome-edited plants in a short time [7]. The application of this system has been reported in various plants such as Arabidopsis, tobacco, rice, and wheat [1][2][10]. Traits mainly related to productivity, biological and abiotic stress resistance, and nutritional quality improvement are being manipulated by genome editing. Therefore, the technology for developing genome editing crops using CRISPR/Cas will help to develop active alternatives in the fields of plant-related global issues, such as strengthening the global food supply, responding to global warming, and sustainable agriculture.
To promote the efficiency of genome-edited plant development, there are three major ways to increase the efficiency of genome editing: efficient gRNA design, effective delivery systems, and increased gRNA accessibility to the target region through chromatin structural modification. In recent years, active research has been conducted on guidelines and software tools for effective CRISPR gRNA design [11][12][13]. The computational approaches have been developed for scoring guide RNAs to escape low cleavage efficiency and off-target effects [10]. Furthermore, the delivery of editing reagents to plant cells is a very critical step for the generation of genome-edited plants. Protoplast transfection, Agrobacterium-mediated transfer DNA (T-DNA) transformation, or particle bombardment are methods by which CRISPR-mediated editing reagents, including DNA, RNA, and RNPs can be delivered to plant cells. Direct transfection into the protoplast is used for the regeneration of transgene-free genome-edited plants, whereas Agrobacterium-mediated transformation and particle bombardment are normally used for the two major vector delivery methods for the production of edited plants [14]. Advances in efficient delivery systems will accelerate plant genome editing in the future. Lastly, increasing the efficiency of genome editing can be achieved by increased gRNA accessibility to the target region through chromatin structure. It was reported that the treatments of chromatin-modulating compounds induce histone hyperacetylation at the target sites, resulting in a significant increase in the efficiency of indel formation in a dose-response manner in mammalian cells [15]. In particular, it is known that TSA is effective in animal cells, but its effect has not been proven in plant cells.
Trichostatin A (TSA) is a representative histone deacetylase (HDAC) inhibitor that can bind to HDAC by inserting its long aliphatic chain into the catalytic active pocket, resulting in inhibition of the enzymatic activity of HDAC [16]. It was reported that TSA facilitates totipotency in the male gametophyte in Brassica napus [17], and HDAC inhibitors TSA and suberoylanilide hydroxamic acid (SAHA) improved the rate of microspore embryogenesis and the frequency of direct plant regeneration in pakchoi (Brassica rapa ssp. chinensis L.) [18]. Wheat microspore-derived embryogenesis and green plant regeneration were similarly activated by TSA treatment, suggesting that TSA leads to an increase in histone acetylation and global alteration of gene expression [19]. However, TSA’s effects on the genome editing efficiency of CRISPR/Cas9 have been not examined in plant protoplasts.

We tested whether a compound for epigenetic regulation, TSA, plays a stimulatory role in CRISPR/Cas9 genome editing during PEG transfection, especially by leading to chromatin structural modification. To prove this hypothesis, first of all, we selected the lettuce SOC1 gene and tobacco PDS gene as targets for genome editing from protoplasts. We designed the gRNA of the lettuce SOC1 gene using CRISPR RGEN Tools (http://www.rgenome.net/cas-designer/) (Figure 1A) and the gRNA of the tobacco PDS gene by referring to the previous study for gRNA design. To investigate whether gRNA works properly, we examined whether it was cleaved under in vitro conditions. It was confirmed that Cas9–RNP complexes from lettuce were cleaved well at their target sites in the in vitro cleavage assay (Figure 1B). 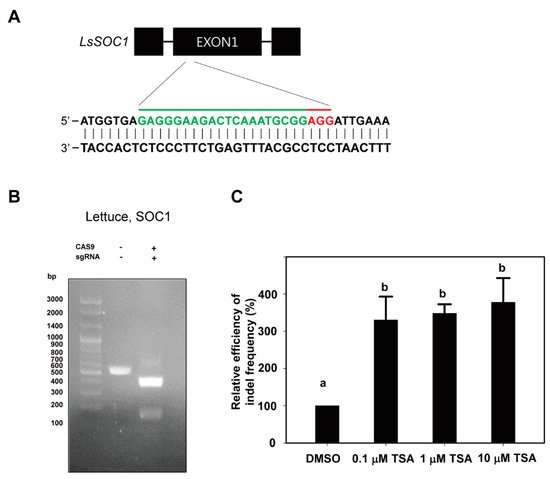 3. Effects of TSA on the Mutation Patterns in Protoplast Cultures

Next, we analyzed the indel patterns induced by Cas9–RNP complexes with TSA treatment. Interestingly, TSA has not only increased the indel frequency but also induced more various indel mutation patterns from lettuce protoplasts (Figure 2). In the case of DMSO treatment, the indel mutation patterns at the target site of the LsSOC1 gRNA were 41, but those of 0.1, 1 and 1 μM TSA were 105, 138 and 121, respectively (Figure 2). These results clearly show that TSA has a stimulatory role in the increase in indel mutation patterns from lettuce protoplasts using LsSOC1 gRNA. The results suggest that TSA treatment induces more cleavage of the target by the Cas9 protein-gRNA RNPs, resulting in more mutations. An insertion of one base pair was the most common editing pattern among mutation patterns at the LsSOC1 target loci in protoplasts treated with DMSO or TSA but showing a difference in mutation number (Figure 3). For example, in the case of 1 bp insertion, T insertion of target site, 0.1 μM, 1 μM and 10 μM TSA treatment yielded 1346, 1776 and 1770 reads, respectively, while DMSO treatment yielded 556 reads. Furthermore, different types of 1 bp insertions, A and G insertion, and short deletion are mainly found at the LsSOC1 target loci in protoplasts treated with DMSO or TSA. The results are consistent with a previous study in which mutations caused by Cas9 during DSB repair were predominantly short deletions and 1 bp insertions [10][20]. The data suggest that although TSA treatment can lead to a variety of patterns, the main patterns are similar and lead to differences in the indel frequency. 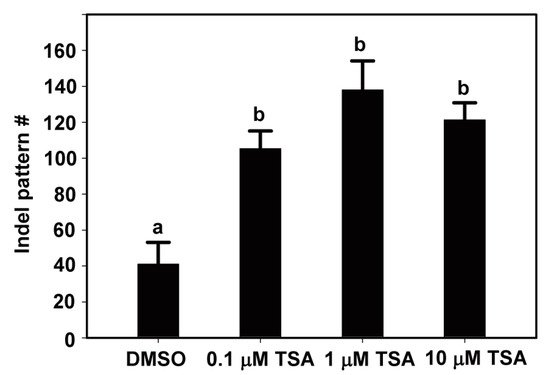 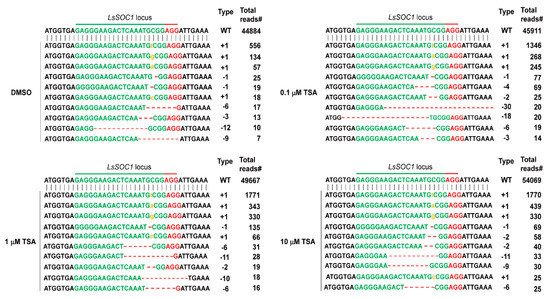 Figure 3. The representative indel types at LsSOC1 target loci generated by delivery of Cas9 and gRNAs with DMSO or various concentrations of TSA treatment. An insertion of one base pair was the most common mutation pattern among the indel patterns induced by DMSO or various concentrations of TSA treatment at the LsSOC1 loci. The target region is shown in green letters followed by PAM (NGG; red). Yellow lower-case letters mean inserted base, and red dash means nucleotide deletion.

4. Effects of TSA on the Structural Changes of Chromatin in Protoplast Cultures

Since the packaging of eukaryotic DNA into chromatin restricts the ability of the Cas9 protein and gRNA to access their target and the recruitment of DNA damage repair machinery to DNA DSB sites cleaved by Cas9, the potential relationships between chromatin remodeling and genome editing have been explored in many organisms, from yeast to humans [21][22][23][24]. Accordingly, we investigated the effects of TSA on chromatin structure by a chromatin accessibility test using micrococcal nuclease (MNase) that cuts internucleosomal DNA. The ratios of intact genomic band intensities treated with different concentrations of MNase (gc) to the non-treated control (g0) represent the degree of chromatin relaxation. It can be seen that the higher the concentration of MNase in the DMSO-treated group, the lower the ratio of gc/g0 (Figure 4). Chromatin accessibility of TSA treatment groups was higher than that of DMSO treatment group, as revealed by the lower g0/gc ratio. When treated with 1 units/mL MNase, the ratio decreased significantly according to the TSA concentration, which means that chromatin accessibility was higher. Although the difference between the TSA and DMSO treatment groups was small when 5 and 10 Units/mL MNase were treated, the ratio of gc/g0 of the TSA-treated group was lower than that of the DMSO-treated group, which means that chromatin accessibility was higher. These results indicate that TSA has a positive effect on the chromatin structural modification in protoplasts and may influence the ability of gRNA to access the target or the recruitment of DNA damage repair machinery to DNA DSB cleaved by Cas9 after PEG transfection. 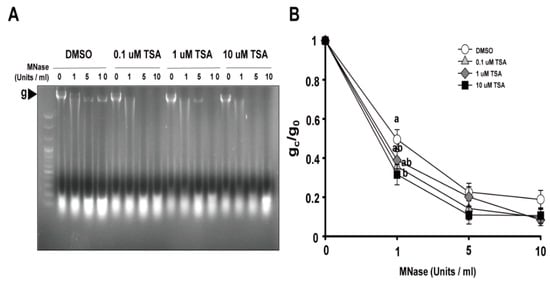 5. Effects of TSA on Histone Acetylation in Protoplast Cultures 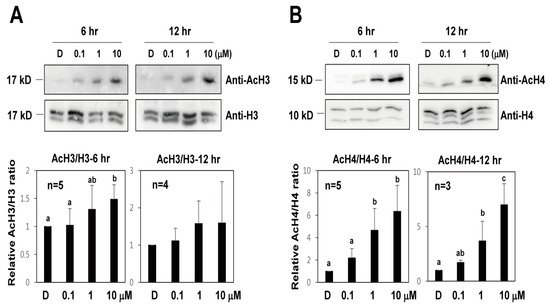 6. Effects of TSA on Expression of Cell Division Regulatory Genes and Formation of Callus 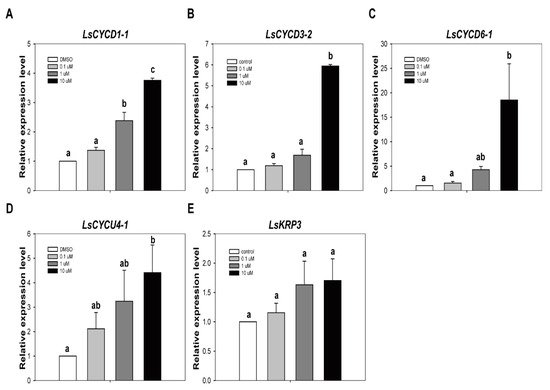 More
© Text is available under the terms and conditions of the Creative Commons Attribution (CC BY) license (http://creativecommons.org/licenses/by/4.0/)
Upload a video for this entry
Information
Subjects: Plant Sciences
Contributor MDPI registered users' name will be linked to their SciProfiles pages. To register with us, please refer to https://encyclopedia.pub/register :
Suk Weon Kim
View Times: 58
Revisions: 2 times (View History)
Update Time: 10 Aug 2021
Table of Contents
1000/1000
Hot Most Recent