Submitted Successfully!
Thank you for your contribution! You can also upload a video entry related to this topic through the link below:
https://encyclopedia.pub/user/video_add?id=12967
Check Note
2000/2000
Wearable Sensing Technologies
Edit
This entry is adapted from 10.3390/ma14154070

Interest in wearable stretch sensors has increased due to their potential uses in medical applications to monitor the health of a patient [1][2][3][4][5][6][7][8][9][10], to assess biomechanics, [11][12][13][14][15][16][17][18][19][20][21], and as drug delivery systems in pharmaceutical applications [22][23]. Wearable sensors may also have applications in athletics. [11][18][21][24][25][26][27][28], soft robotics [21][29][30], ergonomic assessments [19] and deep space exploration [31]. This interest is especially timely as the SARS-CoV-2 (COVID-19) epidemic has led to decreased in-person office visits to medical professionals while concomitantly increasing the number of virtual visits via telemedical platforms [32][33][34]. The increased use of telemedicine has led to an increased interest in the use of wearable sensors to monitor the health of patients outside of the clinical setting [18][35][36]. By 2022, over 1,000,000,000 wearables are expected to be in use globally [37], and although the opportunities provided by wearable sensors are recognized, few sensors have been formally validated [38], and research is still needed to determine the accuracy, interpretation, and applicability of the data provided by wearable sensors [38][39]. While many wearable sensor prototypes have been described for the previously mentioned applications, for these sensors to move from “bench to bedside”, standardized testing methods, including those that focus on the fatigue life of a wearable sensor, are needed [40].
Wearable sensing technology may be broadly defined as electronic devices embedded within or worn upon the body that rely on sensors to capture and transmit data to an integrated display unit, a computer, or a smartphone [39][41][42][43][44]. Based on this definition, currently marketed wearable sensor technologies can be divided into internal sensors that are subcutaneously implanted in the body and external sensors that are worn on the body. Examples of the former include implantable cardioverter defibrillators (ICD), which sense cardiac depolarization [45][46][47][48][49][50][51][52][53][54][55][56][57]; implantable loop recorders, which are implantable electrocardiograms (EKG or ECG) [22][23]; and invasive continuous glucose monitors (CGM), which use a sensor embedded in the upper arm, abdomen, or gluteus to measure glucose levels from interstitial fluid [58][59], while examples of wearables that fall into the latter include smart watches, sleep and fitness trackers, or ECG sensors (Figure 1). Fatigue failures of wearables, such as ICDs, are widely recognized and result in significant morbidity and mortality [45][46][47][48][49][50][51][52][53][54][55][56][57]; therefore, understanding the electromechanical fatigue and failure properties of proposed wearable sensors is paramount in insuring patient safety. Although such failures are recognized with internally implanted sensors, a lack of standardized fatigue testing methods and validation studies [38][40], coupled with sensors fabricated from varying materials, has led to a paucity of comparable data regarding the durability and accuracy of wearable sensors. Further, the fatigue testing of wearable sensors is confounded due to the need to predict not only the fatigue life of the materials comprising the sensor but also the fatigue life (stability) of the signal produced by the sensor. 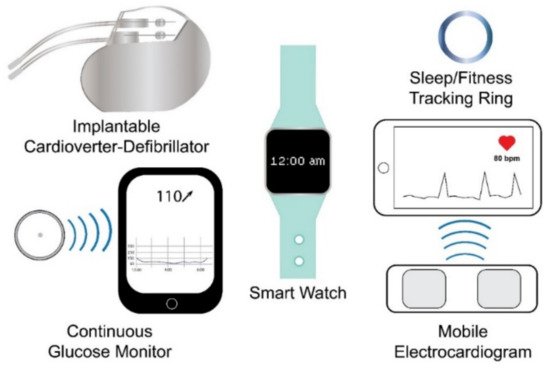 Internal wearable sensing technologies are fabricated from inert materials that do not elicit a bioreactive response upon implantation. Implantable materials include metals such as stainless steel and titanium, polymers such as polyethylene (PE) and polymethylmethacrylate (PMMA), and ceramics such as hydroxyapatite [60]. Within the United States, implanted medical devices, including ICDs, internal loop recorders, and CGMs, which may also be considered wearable technologies, are regulated by the Food and Drug Administration (FDA) as Class III medical devices [61][62][63]. For internal wearable sensing technologies to receive FDA approval to enter the marketplace, the sensor must either receive Premarket Approval (PMA) by undergoing clinical trials to demonstrate its safety and efficacy, or the sensor may be cleared to enter the market by the Premarket Notification 510(k) process which involves submitting premarket data to the FDA to show that the proposed internal sensor is “substantially equivalent” in both safety and efficiency to a sensor that did not require PMA approval and is already on the market [61][62][63][64][65]; however, “substantially equivalent” devices may be fabricated using both differing materials and differing mechanisms of action providing the safety profiles of the two devices are similar [61], but because of the variation in materials and mechanisms of action, testing standards that apply to one device do not necessarily correlate with the comparative device [61]. Further, incremental changes to medical devices initially approved by the PMA process may be submitted to the FDA for market clearance via a supplement that may not require clinical data [48][49], and underlying issues with the updated device may not be recognized until the device is in widespread use [61]. In contrast, the European Union has recently implemented regulations that require clinical evaluations for implantable medical devices throughout the lifespan of the device; therefore, clinical data is required from pre-market evaluations to post-market evaluations. Further, clinical data is required even in the case of incremental changes [66][67]. For example, in the United States, updated ICD leads can enter the marketplace through the use of a PMA supplement that does not include clinical data demonstrating the safety and efficacy of the updated lead; whereas, under the new regulations adopted by the European Union, the introduction of updated pacemaker leads requires clinical data that address the safety and efficacy of the lead [48][49][66][67]. Fatigue failures of ICD leads approved via PMA supplementation in the United States are common [45][46][47][48][49][50][51][52][53][54][55][56][57], but whether the new European Union regulations either prevent the entry of such leads into the market or prevent adverse outcomes by the timely recognition of issues with the leads during post-market surveillance remains unclear [68].
ICD leads are typically comprised of either a low-voltage, nickel–cobalt–chromium–molybdenum alloy coil conductor or a high-voltage, silver or platinum coil conductor that is coated with ethylene tetrafluoroethylene and poly-tetrafluoroethylene and housed within a silicone cylinder that also acts as insulation to separate the conductive cables from the electrode tips [53][69][70] (Figure 2). Leads are thin and flexible, ranging in diameter from 2.1 to 2.87 mm, to navigate the vasculature and are inserted into the myocardium [69][71]. Electrodes at the tips of ICD leads act as sensors to recognize atrial and ventricular depolarizations [71]. Upon sensing a depolarization event, a signal is sent to the pulse generator, which contains a battery and a circuit board, where the signal is processed, allowing for both the detection and correction of abnormal heart rates and rhythms based on programmable thresholds [71]; therefore, ICD leads are critical sensing mechanisms, and preventing fatigue failures of the leads will prevent adverse patient outcomes. 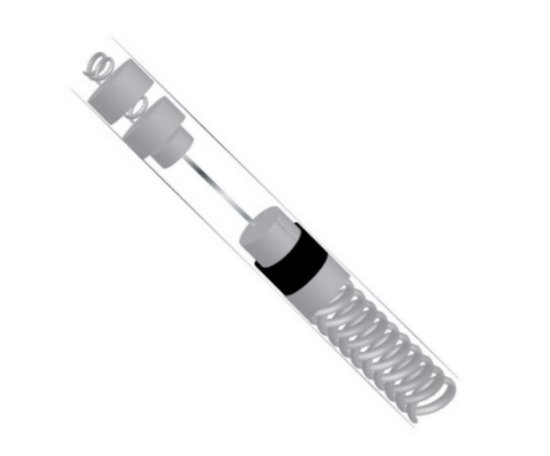 Figure 2. Simplified cross-section of an implantable cardioverter-defibrillator lead.
ICD leads are subjected to more than 100,000 cycles of flexure per day [53], and fatigue failures of ICD leads may result in high impedance if the lead is fractured or low impedance if the insulation fails, causing the lead to short circuit [70]. Additionally, fatigue failures of ICD leads may result in noise in the signal [54][55][57][70], inappropriate pacing [45][69], inappropriate defibrillation [45], the delivery of unnecessary shocks resulting from oversensing [45][46][50], or mortality [46][47], especially in a failure to detect ventricular fibrillation [71].
Few published studies have assessed the fatigue life of ICD leads [72]; however, Altman et al. [72] have noted that how the interaction between the coil and the individual wires comprising the coil affect the fatigue life of the lead is unknown and may require special consideration when evaluating fatiguing methods. Liu et al. [73] found that the stresses placed on the lead in vivo could be determined by applying classic mechanical principles to a model created from 3D images rendered from angiograms and argue that this method can facilitate fatigue-life predictions of the leads. Recently, due to the ongoing high incidence of failure, standard protocols for the fatigue testing of ICD leads have been proposed [74]. The proposed method involves the application of a buckling or a bending force at a rate of 5 Hz to 12 samples per four curvature amplitudes of 0.78 cm−1, 1.11 cm−1, 2.12 cm−1, and 2.45 cm−1 (n = 48). All tests are performed at a temperature of 23 ± 5 °C. The first 1000 cycles are considered run-in, and testing is terminated upon failure of the lead or after the completion of 5,000,000 cycles. Disruption of electrical continuity or a 150% rise in the resistance over the initial resistance value constitutes failure [74]. While researchers are working to standardize testing methodologies for some internal wearable sensors [74], fatigue testing methods for external wearable sensors are not standardized [40], and a variety of testing methodologies, rates, and cycling regimes have been reported in the fatigue testing of proposed wearable sensors [6][11][12][13][20][21][30][75][76][77][78][79][80][81][82][83][84][85][86][87][88][89][90][91][92][93][94][95][96][97][98][99][100].