Submitted Successfully!
Thank you for your contribution! You can also upload a video entry related to this topic through the link below:
https://encyclopedia.pub/user/video_add?id=12954
Check Note
2000/2000
Bacterial Toxins Active against Mosquitoes
Edit
Upload a video
This entry is adapted from 10.3390/toxins13080523

Insects can act as vectors of etiological agents of different diseases and can be a nuisance to humans, being responsible for health burdens worldwide. Re-emergent and emergent diseases, in particular arboviruses, remain a global challenge as recently shown for the epidemic problems caused by the Zika virus. Microbial larvicides based on entomopathogen bacteria have been successfully used for controlling mosquito and black-fly populations, as an alternative to the conventional classes of chemical insecticides, due to their high effectiveness and environmental safety. Bacillus thuringiensis serovariety (svar.) israelensis (Bti) de Barjac was the first B. thuringiensis (Bt) bacterial serotype identified as active against some Diptera larvae.

Larvicides based on the bacteria Bacillus thuringiensis svar. israelensis (Bti) and Lysinibacillus sphaericus are effective and environmentally safe compounds for the control of dipteran insects of medical importance. They produce crystals that display specific and potent insecticidal activity against larvae. Bti crystals are composed of multiple protoxins: three from the three-domain Cry type family, which bind to different cell receptors in the midgut, and one cytolytic (Cyt1Aa) protoxin that can insert itself into the cell membrane and act as surrogate receptor of the Cry toxins. Together, those toxins display a complex mode of action that shows a low risk of resistance selection. L. sphaericus crystals contain one major binary toxin that display an outstanding persistence in field conditions, which is superior to Bti. However, the action of the Bin toxin based on its interaction with a single receptor is vulnerable for resistance selection in insects. In this review we present the most recent data on the mode of action and synergism of these toxins, resistance issues, and examples of their use worldwide. Data reported in recent years improved our understanding of the mechanism of action of these toxins, showed that their combined use can enhance their activity and counteract resistance, and reinforced their relevance for mosquito control programs in the future years.

Insects can act as vectors of etiological agents of different diseases and can be a nuisance to humans, being responsible for health burdens worldwide [1]. Re-emergent and emergent diseases, in particular arboviruses, remain a global challenge as recently shown for the epidemic problems caused by the Zika virus [2]. Microbial larvicides based on entomopathogen bacteria have been successfully used for controlling mosquito and black-fly populations, as an alternative to the conventional classes of chemical insecticides, due to their high effectiveness and environmental safety [3][4][5]. Bacillus thuringiensis serovariety (svar.) israelensis (Bti) de Barjac was the first B. thuringiensis (Bt) bacterial serotype identified as active against some Diptera larvae [6]. Subsequently, Lysinibacillus sphaericus (L. sphaericus) Neide strains, with activity against Culicidae larvae were discovered [7]. Since the 1980s, products based on these two bacteria have been considered the most successful biological agents for controlling the larvae of mosquitoes and black-flies [5][8][9][10]. Bti and L. sphaericus are Gram-positive, aerobic, sporulating, and cosmopolitan bacteria that display high and selective larvicidal activity against Diptera including genera of public health importance such as Aedes, Anopheles, Culex, and Simulium [5]. In this review we will focus on describing the recent knowledge regarding to the mechanism of action of the insecticidal proteins produced by these bacteria and their synergism, and examples of utilization for mosquito control, since another review in this Special Issue will cover bacterial toxins in the control of dipteran insect pests of medical and agronomic importance [11].
The larvicidal activity of Bti and L. sphaericus is due to the production of crystalline inclusions during their sporulation phase of growth (Figure 1). These crystals are composed of protoxins that act on the midgut epithelial cells of the larvae after ingestion, targeting specific membrane-bound receptors [12][13]. Notably, the selective mode of action of these toxins is the major feature considered in the actual safety requirements for larvicides employed for mosquito control. According to the classification of the Insecticide Resistance Action Committee (https://irac-online.org/, accessed on 20 June 2021), those toxins belong to the mode of action Group 11 designed as “Microbial Disruptors of Insect Midgut Membranes”. In order to be active, the insecticidal crystals produced by Bti and L. sphaericus are required to be ingested by the larvae. Inside the gut, the protoxins are processed into active toxins that finally bind to midgut receptors, leading to pore formation in the midgut cell membranes [9][14]. 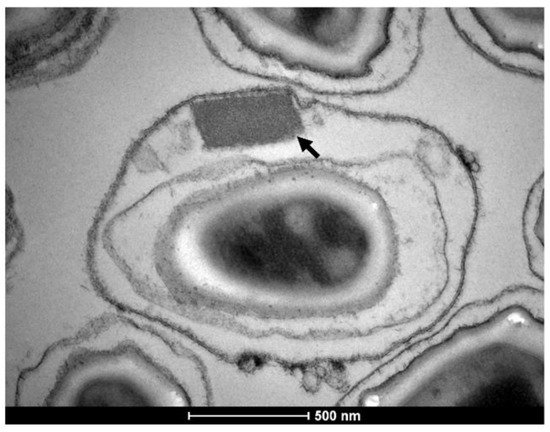 Figure 1. Bacillus thuringiensis svar. israelensis, 4Q-7 acrystalliferous strain, transformed line expressing the Binary protoxin crystal from the Lysinibacillus sphaericus 2362 strain. The arrow points to the crystal. Micrograph kindly provided by Dr. Antônio Pereira-Neves.
Bti was discovered by Margalit and Goldberg in 1977 [15] and classified by its flagellar serotyping as H-14 [6], remaining as a reference strain. The full classification of Bacillus thuringiensis (Bt) serovars and their toxins [16] can be found in http://www.lifesci.sussex.ac.uk/home/Neil_Crickmore/Bt/ accessed on 18 June 2021. The insecticidal parasporal crystal produced by Bti is commonly composed of four major protoxins [17] with a selective spectrum that includes the larvae of Culicidae (mosquitoes), Simuliidae (black-flies), and Chironomidae (midges) species. The major advantage of Bti is its proven field effectiveness after more than four decades of use, without records of larvae resistance to the insecticidal crystal [4][5][18].
The first mosquitocidal strain of L. sphaericus, formerly classified as Bacillus sphaericus [19], was isolated by Kellen et al. [7], but the first strains studied, such as the Kellen strain, showed low toxicity. Later, the discovery of additional strains displaying high larvicidal activity—such as 1593 [20][21], 2362 [22], and C3-41 [21]—led to the development of commercial larvicides [13]. L. sphaericus isolates were grouped into flagellar serotypes by DNA homology analysis [13][23], and recent genomic sequencing has also contributed to their classification [24]. Among the insecticidal factors that were characterized in L. sphaericus strains, the crystal containing the binary (Bin) protoxin is by far the most important. Recently, a novel nomenclature of pesticidal proteins based on their protein structure named the Bin toxin as “Tpp” toxin pesticidal protein [16], while the Cry mnemonic was retained for the three domain proteins, and the Cyt mnemonic was retained for the Cyt-related proteins [16]. The Bin crystal of L. sphaericus has a narrow spectrum of action compared to the Bti’s crystal, as it only targets Culicidae larvae [5]. Field performance in breeding sites with organically polluted water is an outstanding feature of Bin crystals, but insects resistant to the Bin crystal have evolved causing a problem that requires additional management practices [25][26][27]. This review aims to present the major features and recent knowledge of Bti and L. sphaericus mosquitocidal toxins and the opportunities to exploit them based on novel advances regarding their specific mode of action in the midgut cells and on the plethora of experiences derived from their field utilization.

Bti and L. sphaericus crystals remain the most powerful and selective insecticidal compounds, available to date, with proven field effectiveness for controlling dipteran species relevant to public health. Recent findings on their mode of action, more specifically on the mechanism of synergistic action of the toxins from both bacteria and the new insights of their interaction with the midgut cells, can be exploited in the future to confer advantages such as broader spectra of action, or to reduce the risk of resistance selection and to improve the persistence under field conditions. Such advancements allied with improved operational practices will allow the evolution of the use of these larvicides from single control agents to their adoption as part of more effective integrated control programs. In addition to the effectiveness of the toxins currently available, these entomopathogenic bacteria also represent opportunities to develop new and/or improved toxins able to display better activities and play an outstanding role in the future of mosquito control.