Submitted Successfully!
Thank you for your contribution! You can also upload a video entry related to this topic through the link below:
https://encyclopedia.pub/user/video_add?id=12860
Check Note
2000/2000
Synthesis of Organoclays
Edit
This entry is adapted from 10.3390/min11070707

Organoclays are effective adsorbents, prepared by intercalation or surface grafting of clays and clay minerals with various organic compounds. Organoclays have important practical applications as adsorbents of a wide range of organic pollutants and some inorganic contaminants.

The properties of phyllosilicate (layered) clay minerals, such as great specific surface area, chemical stability, variable expansibility, reactive functional groups, and surface charge make them perfect adsorbents for a wide range of environmental pollutants [1][2][3]. The advantages of clays as adsorbents are also related to the following: they are naturally widespread, commonly nontoxic, easily mined, and relatively cheap materials. For example, more than 16 Mt of bentonite clays and 44 Mt of kaolin clays are mined annually at present [4]. The price of clay is 0.05–0.46 USD/kg, and the cost of montmorillonite is about 0.04–0.12

Most clay minerals’ outer and inner surface is hydrophilic and polar, resulting in high affinities towards low and high-molecular, mainly cationic, substances. However, their anionic substance-adsorbing capacity is low: less than 5 cmol/kg for smectites [5] and not more than 2 cmol/kg for kaolinites [6]. Although clay minerals have a hydrophile surface, their significant area and volume of small pores allow the clays to adsorb some amount of the nonionogenic substances [7]. The modification of natural clays by organic surface-active substances (surfactants) makes it possible to refine their pore structure and impart the hydrophobic property to their surface if necessary.

The synthesis of special organo-mineral materials (organoclays) by intercalation or by grafting organic surfactants into expanding clay minerals has attracted a great deal of attention over the past two decades [8]. Organoclays have important practical applications as adsorbents of organic pollutants [9][10] and as components in the formation of clay polymer nanocomposites [11]. The theoretical basics for intercalating surfactants into the interlayer space of clay minerals are well understood ([8][10][11] etc.). Recently, there has been growing interest in the synthesis of organoclays using zwitterionic substances that form complex adsorption positions and nonionic surfactants with low toxicity and biodegradability [8][12].

The idea of using the intercalation technique for the transformation of clays into porous analogs emerged in the 1950s. Barrer and MacLeod studied the adsorption of montmorillonite and the mineral intercalation of various gases and vapors [13]. In 1955, they wrote that the substitution of exchange inorganic cations in montmorillonite by cations N(CH3)4+ and N(C2H5)4+ increases the interlayer distance and provokes great changes in the sorption of organic molecules. They also demonstrated sorption selectivity based on the molecular diameter of the cross-section of adsorbates [14].
Organoclays are formed during the intercalation of layered silicates by organic substances not leading to their exfoliation. Organoclays can be defined as clay minerals (phyllosilicates, less commonly, inosilicates) modified by the adsorption of molecules of organic surfactants and/or other substances that retain their layered or chain mineral structure [15][16]. Organic-modified smectites synthesized by substituting inorganic counterions for the short-chain compact cationic compounds, such as tetramethylammonium, tetraethylammonium, and trimethylphenylammonium, are defined by some researchers as organoclay adsorbers [15][17]. Organic modified minerals obtained by the intercalation of long-chain quaternary ammonium ions of the general form [(CH3)3NR]+ or [(CH3)2NR]+, where R is the alkyl hydrocarbon, are called organophilic organoclays [17]. The substitution of primary interlayer cations by organic cations produces a surface composed of covalent-bonded organic fragments. At the same time, the hydrophile property of the surface can be retained and the hydrophobic or amphiphilic surface can also be formed. In this condition, a significant expansion of the range of potential sorbates can be obtained. In recent years, researchers have devoted much attention to the application of organoclays for the immobilization of various pollutants in soils and clays, as well as the purification of wastewaters [3][15][16]. In addition, organoclays can be widely used as fillers in polymer–clay nanocomposites, thereby improving the properties of these materials [11]
The adsorption efficiency of organoclays is governed mainly by the following properties: the presence or absence of defects in the crystal lattice, a cation composition of the interlayer surfaces and a cation exchange capacity of the mineral used for the synthesis of organoclays, as well as properties of the intercalated organic substance (molecular mass, length, and the presence of functional groups in the molecule) and its amount.
If the initial mineral has crystal lattice defects, such as bends and fractures in the octahedral and tetrahedral sheets, microfissures, or convex or concave surfaces, the close packing is distorted. As a result, a negative effect on the quality of organoclays would be found due to changes in the homogeneous distribution of the organic substances’ molecules. [18]. However, flat defects in crystal structures and point and linear defects (dislocations) in crystals govern the ion adsorption capacity of the initial clay minerals significantly [18]. According to Lagaly (1994) [19], charge heterogeneity is a characteristic property of 2:1 clay minerals (smectite, in particular). In these minerals, charge density can vary in different layers or even within individual sheets; charges are likely to be distributed more uniformly at the centers of clay particles than at the edges [20]. Structure defects in minerals and, correspondingly, the heterogeneity of charge distribution promote a local aggregation of organic substances in such sectors and provoke the expansion and exfoliation of minerals under heavy loads of the intercalated substance. Thus, the charge value and its distribution are important characteristics of the natural mineral. For example, vermiculite has a higher surface charge among the 2:1 phyllosilicates than smectite, and it shows a more uniform and regular structure expansion during treatment with organic cations [20]. Various cation substitutions in the 2:1 structure phyllosilicate layers generate a constant structural charge near the basal plane. Even an ideal pyrophyllite structure (without any regular structural charge) retains the electric field near the basal plane [21].
The most prominent ions on the clay interlayer space are Ca2+, Mg2+, H+, Na+, K+, NH4+, Li+, SO42−, Cl−, PO43−, and NO3−. These ions can be exchanged relatively easily with other ions, without any influence on the clay mineral structure [2]. The cation composition of smectites depends on the mineral deposit type. The formation of Na- and Ca-montmorillonites is governed by the paleogeographic sedimentation settings. Thalassogenic basins with saline and brine (Na–Cl) waters are marked by the fixation of Na and K on clay particles; continental fresh-water basins are marked by the precipitation of alkaline earth elements (Ca and Mg) [22]. Bivalent cations guarantee a stronger bond between layers relative to the monovalent species. Therefore, bentonite dominated by exchange cations of Ca (Ca-bentonite) is characterized by a lower dispersion and expansion degree (8-fold structure expansion) than Na-bentonite (15-fold expansion) (Figure 1 [23]). At the same time, the interlayer distance varies from 1–5 nm (for Ca-montmorillonite) to 15–20 nm (for Na-montmorillonite) [22]. The ion charge also affects the ion exchange kinetics. Commonly, the exchange rate shows a negative correlation with the charge of the exchange species [24]. 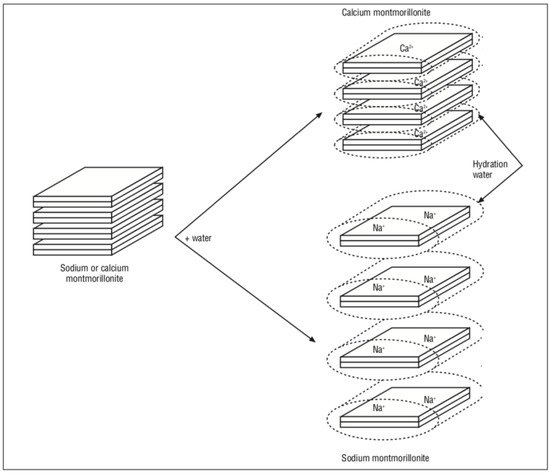 Figure 1. Swelling of Ca-montmorillonite and Na-montmorillonite in water [23].
Depending on the properties of the mineral and intercalated substance, the organoclays can be formed with the involvement of electrostatic and ion-dipole interactions, hydrogen bonds, and Van der Waals forces [15]. The charge in the basal layer surface is responsible for the expansion and ion sorption by the cation exchange mechanism. In contrast, the pH-dependent adsorption of cations is controlled by the protonation/deprotonation reactions at the layer edges. The chemical structures of the most commonly used surfactants for the modification of layered silicates are shown in Table 1 [25].
Table 1. Chemical structures of the most commonly used surfactants for the modification of layered silicates [25].
The orientation of intercalated organic molecules with short alkyl chains is governed mainly by the electrostatic interactions of their polar groups with silicate layers. In contrast, compounds with a longer chain interact with the mineral surface via Van der Waals forces. The retention of the adsorbed molecules depends on the polarizing capacity of the interlayer cations. Multivalent cations with a strong electrostatic force can retain a large number of organic compounds relative to alkali metal ions and NH4+ [26]. The softness or hardness of exchange cations in the interlayer space governs the coordination bond type in the aliphatic and aromatic amines. Soft cations, such as Zn2+, Cd2+, Cu2+, Ag+, and others, bind the amines directly, whereas water bridges are formed between amines and rigid cations (alkali and alkali earth metal ions) [27]. For example, pyridine is coordinated directly with Cu ions, but via water bridges with the interlayer Mg and Ca cations [28].
The efficiency of adsorption by organoclays is also affected by the presence of associated ions. For example, if electrolytes (NaCl) are present, both nonionic (in general, neutral) and cationic organoclays demonstrate a decrease of efficiency for the adsorption of several pharmaceutical substances (except the cationic ones). In contrast, the adsorption proceeds successfully in water [29].
The chemical affinity between the organic compound and mineral surface depends on the structure (molecular mass, chain length, and others) of organic molecules, as well as the functional groups and fragments in the organic molecule, such as hydrophobic groups (long-chain aliphatic), positively charged groups (-NH3+), negatively charged groups (-COO−, phenolates, -SO3−), electronegative groups, (-C=O, -C-O-C-, -OH), π-bonds (-C-C-, aromatic rings), the configuration of the available organic molecule, and the presence and properties of the water phase [30].
Organic substances with one aliphatic chain or flat arrangement of molecules make up one or two layers parallel to the mineral surface [16][31] (Figure 2 [16]). This is exemplified by flat intercalations of aliphatic acids [32]. A stable monolayer structure is obtained if the alkylammonium cation concentration is similar to the cation exchange capacity of the mineral, that is, the cation area is smaller than one exchange site [33]. If the concentration of organic substance increases [16] or the area occupied by the organic cation exceeds the exchange site area [33], two- and three-layer arrangements of the aliphatic chains can appear. The length of the aliphatic chain needed for the monolayer-to-bilayer transition is also affected by the value and distribution uniformity of charge on the silicate surface. If the phyllosilicate has a homogenous charge, the transition can take place abruptly and is characterized by an identical chain length. The interlayer charge, however, usually changes. Therefore, the transitions take place at different numbers of carbon atoms (from 6 to 13) in the chain [16][20][33]. 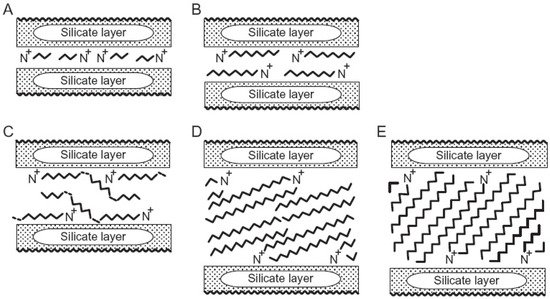 Figure 2. Arrangement of alkylammonium ions in the interlayer space of smectites: (A) monolayers, (B) bilayers, (C) pseudo-trimolecular layers, (D,E) paraffin type arrangements with different tilting angles of the alkyl chains [16].
Long-chain ions of alkylammonium and quaternary ammonium can display a pseudo-three-layer arrangement (Figure 2), that is, the positive surface-active groups are tied to the silicate layers, while the alkyl chains accept the trimolecular arrangement with bends. In the case of high-charge smectites and vermiculites, the interlayer organic cations can accept the paraffin-type arrangement at a certain angle to the mineral surface [16][34] (Figure 2). This is also fostered by the presence of several long aliphatic chains in the molecule [33]. The intercalation of the long-chain alkylammonium cations provides the penetration of other monomers (and polymers) into the interlayer space [33].
Several linear nonionic polymers can penetrate the interlayer space only when the clay mineral is dispersed in polymers’ waters or organic solvents of polymers. Some macromolecules of technical significance intercalate from the water solutions. Many polymers are intercalated along more extended and flat conformations and situated in tight contact with one or two silicate layers. The unfolding of polylisine and polyglutamine acid during the intercalation in montmorillonite is described by Gougeon et al. [35]. The preference of chains over loops is related to the Van der Waals interaction between the polymer segments and surface oxygen atoms. In contrast to the polymer adsorption on the outer surface, the interlayer adsorption is marked by the active involvement of the molecules with a lower molecular mass [33].
The relationship between the spatial arrangement of organic molecules during the intercalation versus the mineral charge and carbon chain length is demonstrated in Figure 3 [36]. 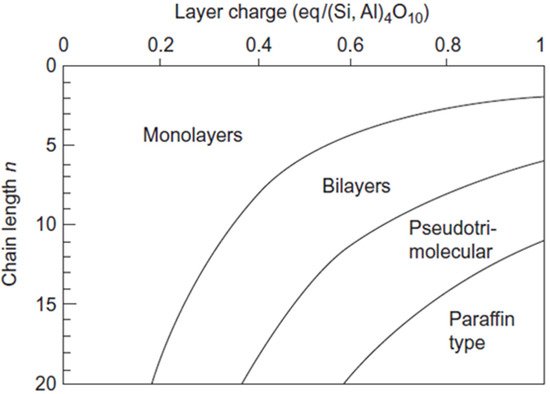 Figure 3. Influence of the layer charge and length of the alkyl chain on the position of alkylammonium ions in the interlayer space [36].