Submitted Successfully!
Thank you for your contribution! You can also upload a video entry related to this topic through the link below:
https://encyclopedia.pub/user/video_add?id=1277
Check Note
2000/2000
Art-sRNAi for Enhanced Antiviral Resistance
Edit
Upload a video
This entry is adapted from 10.3390/plants9060669

Artificial small RNAs (art-sRNAs) are 21-nucleotide small RNAs designed to recognize and silence complementary target RNAs with high specificity. Art-sRNA-based RNAi (art-sRNAi) tools are extensively used in gene function studies or for improving crops. In particular, numerous studies have reported the successful application of art-sRNAi tools to induce resistance against a large number of RNA and DNA viruses in model and crop species. However, the application of art-sRNAi as an antiviral tool has limitations, such as the difficulty to predict the efficacy of a particular art-sRNA, or the emergence of virus variants with mutated target sites escaping to art-sRNA-mediated degradation. Here, we describe the different classes, features and recent uses of art-sRNAi tools to induce enhanced antiviral resistance in plants.

RNA interference (RNAi) is a biological process conserved in most eukaryotes and characterized by the sequence-specific degradation of target RNA by complementary small RNAs (sRNAs) [1]. RNAi pathways are triggered by double-stranded RNA (dsRNA) processed into sRNA duplexes by Dicer ribonucleases [1][2]. One of the strands of the duplex is preferentially loaded into an ARGONAUTE (AGO) protein, and the resulting complex termed RNA-induced silencing complex (RISC) recognizes and silences complementary target RNA through diverse mechanisms [3][4].

In plants, RNAi tools based on the expression of dsRNAs of viral sequence have been extensively used to confer antiviral resistance, despite their lack of high specificity. Artificial sRNAs (art-sRNAs) were developed to overcome this limitation. They consist in 21-nucleotide sRNAs expressed in planta from endogenous sRNA precursors and computationally designed to silence target RNAs with high specificity [5].

2. Classes and features of art-sRNAs

The two main classes of plant art-sRNAs are artificial microRNAs (amiRNAs) and artificial/synthetic trans-acting small interfering RNAs (atasiRNAs/syn-tasiRNAs, hereafter syn-tasiRNAs) [5]. Despite differing in their biogenesis pathway (see below), both classes of art-sRNAs function similarly by associating with AGO1 to specifically silence target RNAs through endonucleolytic cleavage or translation repression (Figure 1). 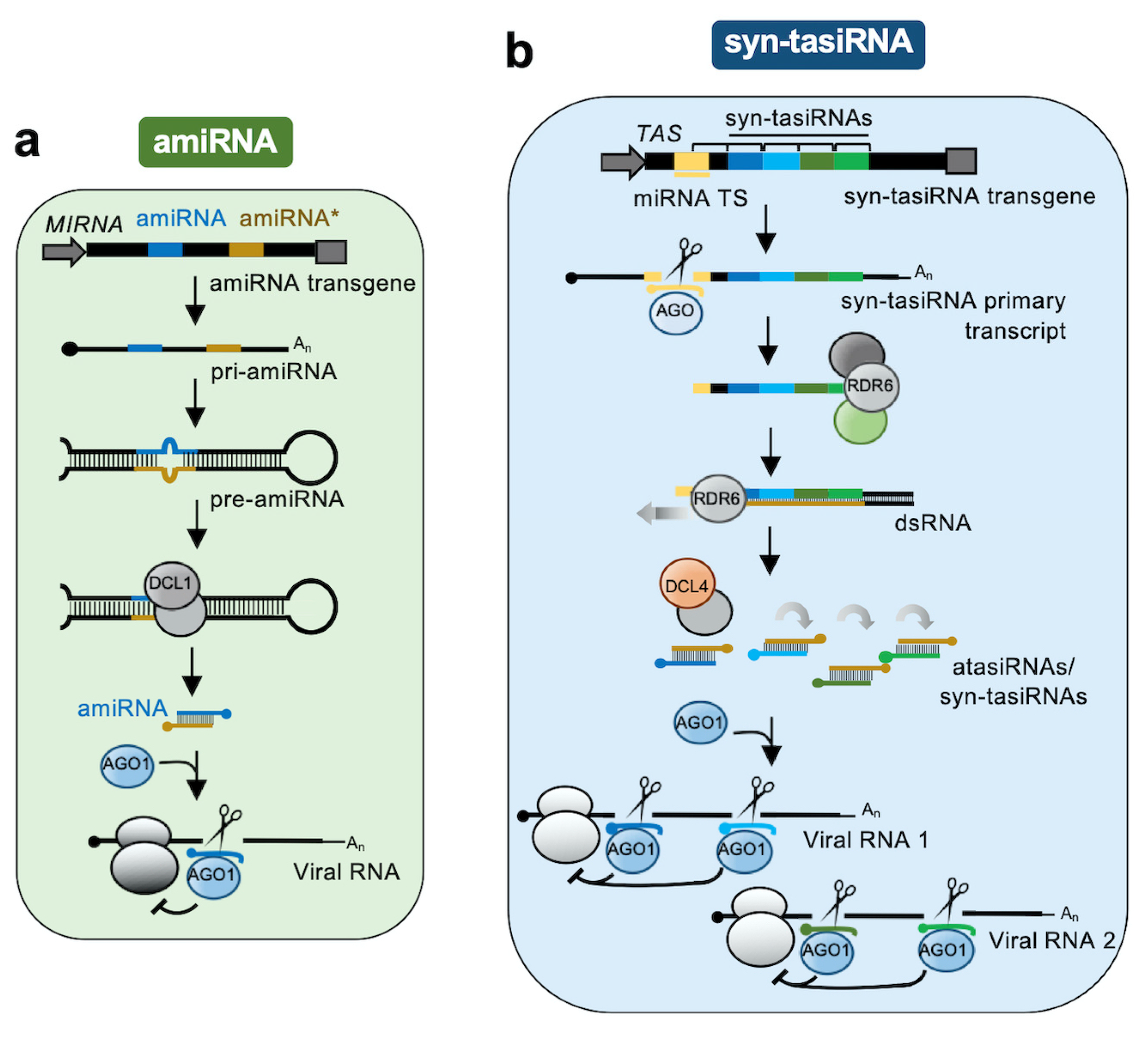 AmiRNAs are produced in planta by expressing amiRNA transgenes containing a functional plant MIRNA precursor in which the endogenous miRNA guide/miRNA star sequences are substituted by the amiRNA guide/amiRNA star sequences (Figure 1a) [5][6]. Importantly, other sequences of the precursor are modified to preserve the original secondary structure required for accurate Dicer-like 1 (DCL1) processing. The amiRNA transgene is transcribed to produce the amiRNA primary transcript (pri-amiRNA). Sequential processing by DCL1 produces the pre-amiRNA followed by the amiRNA duplex, and the amiRNA guide strand is incorporated into AGO1 to target complementary viral RNA, typically in a single site (Figure 1a).

Syn-tasiRNAs are produced in planta by expressing syn-tasiRNA transgenes containing a functional TAS precursor in which a subset of the endogenous tasiRNA sequences is substituted by one or several syn-tasiRNA sequences in tandem (Figure 1b) [5][7]. The syn-tasiRNA transgene is transcribed to produce the syn-tasiRNA primary transcript (pri-syn-tasiRNA) which is cleaved by a miRNA/AGO complex. One of the cleaved products is used by the RNA-dependent RNA polymerase 6 (RDR6) as a template to synthesize dsRNA that is sequentially processed by DCL4 into phased syn-tasiRNA duplexes in 21-nucleotide registered with the miRNA cleavage site.

The antiviral activity of a particular art-sRNA is difficult to predict a priori, therefore systems for the rapid screening of the antiviral activity of large numbers of art-sRNAs are needed in order to avoid the time-consuming generation of stably transformed plants. Recently, a systematic and high-throughput methodology for the simple and fast-forward design, generation, and functional analysis of large numbers of art-sRNA constructs has been described [8]. Briefly, highly specific antiviral amiRNAs are designed with the P-SAMS web tool [9], and selected amiRNA candidate sequences are cloned into BsaI/ccdB “B/c” vectors [10], a new generation of vectors for one-step amiRNA cloning and efficient gene silencing in plants [11]. Each amiRNA construct is transiently expressed in several N. benthamiana plants, which are subsequently inoculated with the virus of interest. The antiviral activity of each amiRNA construct is assessed by  monitoring viral symptom appearance, and through molecular analysis of virus accumulation in plant tissues. This methodology was successfully applied to identify highly effective amiRNAs against RNAs of Potato spindle tuber viroid (PSTVd) [12] and Tomato spotted wilt virus (TSWV) [13] in N. benthamiana.

Another possibility is to develop methods that allow for the identification of immunologically effective small interfering RNAs (esiRNAs). These molecules are generated by DCLs from viral dsRNAs, produced during viral replication [14]. Because the majority of virus-derived sRNAs are ineffective against the producing virus, it has been difficult to distinguish esiRNAs reliably and efficiently. However an attractive methodology has risen up, based on an in vitro system of cytoplasmic extracts from N. tabacum BY-2 protoplasts expressing Tomato bush stunt virus (TBSV) dsRNAs and selected AGO members, for the identification of TBSV-derived esiRNAs [14]. It was based on three steps: i) 21-nucleotide sRNAs derived from TBSV dsRNAs and loaded by AGO1 or AGO2, were immunoprecipitated followed by sRNA sequencing; ii) the catalytic efficiency was assayed in in vitro cleavage assays; and iii) the protective activity of several of these esiRNAs was evaluated by agroinfiltration of each sRNA as an amiRNA in N. benthamiana, and subsequently inoculating TBSV in the same leaf-sites. Results indicated that the functionality of esiRNAs mainly depended on the binding affinity to AGO proteins and the ability to target RNA [14]. Thus, this methodology could be attractive to identify naturally occurring virus-derived sRNAs that are efficient in silencing viral RNAs.

The success in inducing antiviral resistance by the in vivo co-expression of multiple antiviral amiRNAs, through different strategies (Figure 2), has been proven effective in several plant/virus pathosystems (see Table 1 in [15]).

On the other hand, TAS precursors possess a “natural” multiplexing capability allowing the insertion of multiple syn-tasiRNAs in a single construct. Indeed, this type of strategy has been already applied and resulted in high levels of resistance against PSTVd and TSWV in N. benthamiana and S. lycopersicum plants, respectively [16][12].

4. Application of art-sRNAs to control viral diseases in crops

An alternative to the transgenic expression of antiviral RNAs is their topical delivery into plants. This approach was first used to interfere with Alfalfa mosaic virus (AMV), TEV, or Pepper mild mottle virus (PMMoV) infection by mechanically co-inoculating N. tabacum leaves with naked dsRNAs of virus sequence and their corresponding target virus [23]. Later, the same strategy was also applied successfully to interfere with the infection of several viroids [24]. Since these early works, dsRNAs of viral sequence have been delivered to plants through diverse methods to induce resistance against a large number of plant viruses in multiple model and crop species (reviewed recently in  [25][26][27][28].

To date, the exogenous application of art-sRNAs to plants, has not been reported. Most likely this is due to the difficulties that need to be faced, like the lack of efficient production and delivery methods. In this context, several bacterial systems for the efficient production of recombinant RNAs [29][30][31][32] may be used to produce large amounts of art-sRNA precursors in a time- and cost- effective manner. In addition, a possibility to increase the stability and efficient delivery of art-sRNA precursors could be their conjugation to cationic nanoparticles, clay nanosheets, surfactants, or peptide-based RNA delivery systems, as described for other RNAs [26]. For example, sprayed dsRNAs bound to layered double hydroxide (LDH) nanosheets have been successfully used to confer resistance to PMMoV and CMV in N. tabacum [33], in a non-toxic and sustainable manner, and extend the durability of the protection described in previous studies [23]. Thus, the exogenous application of art-sRNA precursors conjugated to new generation nanoparticles may represent a novel, highly efficient, and sustainable strategy to induce antiviral resistance in crops in a GMO-free manner.

We anticipate that art-sRNAi tools will be broadly used to confer antiviral resistance in plants because of their unique features of high simplicity, specificity, and efficacy, as well as for their multiplexing capability and for the availability of high-throughput methodologies for the design, generation, and validation of art-sRNAi constructs. The development of efficient methodologies for the production and topical delivery to plants of art-sRNA precursors, as well as a better knowledge of the basic mechanisms governing art-sRNA biogenesis, mode of action, and viral targeting, are needed to further refine art-sRNAi tools in view of their broader use for enhanced crop protection.

More
© Text is available under the terms and conditions of the Creative Commons Attribution (CC BY) license; additional terms may apply. By using this site, you agree to the Terms and Conditions and Privacy Policy.
Upload a video for this entry
Information
Subjects: Plant Sciences
Contributors MDPI registered users' name will be linked to their SciProfiles pages. To register with us, please refer to https://encyclopedia.pub/register :
Adriana Cisneros
,
Alberto Carbonell
View Times: 458
Revisions: 2 times (View History)
Update Time: 09 Jul 2020
Table of Contents
1000/1000
Hot Most Recent