Submitted Successfully!
Thank you for your contribution! You can also upload a video entry related to this topic through the link below:
https://encyclopedia.pub/user/video_add?id=12636
Check Note
2000/2000
Kynurenine Pathway in Neurodegeneration
Edit
This entry is adapted from 10.3390/ijms22136737

The astrocytes and neuronal cells are considered to be neuroprotective, whereas the infiltrating macrophages and activated microglia are considered to be neurotoxic. Therefore, multiple products of KP can have neuroprotective, neurotoxic, and immunomodulatory effects. QUIN, an excitotoxin, is reported to be the most significant among them, which results in the death of neurons.

The greatest obstacle associated with neurodegenerative disorders is that they are incurable, and the deterioration is progressive with time and age. These pathologies vary in symptoms, pathological features, and drug candidates. Parkinson’s disease (PD), as well as Alzheimer’s disease (AD), are considered to be the most prevalent among the neurodegeneration-related disorders [1]. Recently, PD was reported to affect about 6.1 million people, in comparison to 2.5 million people in 1990 [2]. Accounting for the 21.7% of age standardized disease prevalence rate, the disease progressively accelerated during all these years. In 2016, PD led to 211,296 deaths around the globe [3]. The symptoms in PD include tremors, rigidity, bradykinesia, and disrupted posture, parallel to retardation in mental processing, speech problems, memory losses, and leaning inability.

The prime pathological features of the disease include loss of dopaminergic neurons in the substantia nigra pars compacta (SNpc) and alleviated dopamine (DA) levels in the striatum [4][5]; however, the specific cause of the disease is still to be investigated. When the loss of dopaminergic neurons reaches 70% to 80%, it is marked with the appearance of associated signs and symptoms [2]. Therefore, this period (from the beginning of the loss of dopaminergic neurons in the brain to the identification of clinical signs and symptoms) marks the basis for development of effective treatment therapies for the disease. Despite the availability of numerous treatment options, no therapy is completely effective for this disorder. The therapies available for the disease are associated with hindrances, such as inability to cross the blood–brain barrier (BBB), side effects, limited life span, etc., alongside primary challenges such as the development of sensitive and reliable of biomarkers for disease detection [6][7]. Thus, there is a dire need to develop novel treatment options for PD, with greater specificity and selectivity for the disease targets and limited side effects.

The enzymes associated with KP have been recognized as reliable and promising target candidates for treatment of neurodegenerative diseases. Ageing and inflammation can alter the KP metabolism and availability of TRP [8], thus elevating the susceptibility towards age-dependent neurological disorders, including PD [9][10]. Chronic inflammation of the intestine, gut microbiota changes, and α-synuclein aggregation are the pivotal features of PD pathogenesis [11].

The KP functions as a significant target for PD, which is the major focus area of this review. This TRP metabolism pathway aids in the generation of NAD+. QUIN and KYNA are the two significant metabolites formed in the pathway, where any differences in these metabolites results in PD development, as discussed further in the review. As a primary degradation pathway of essential amino acid, TRP, the KP results in the formation of NAD+, an essential co-factor [12], aiding as well as in immune response regulation.
KP metabolism affects the processes associated with NAD+, by directly regulating the production of NAD+, which further modulates the tri-carboxylic acid cycle and function of the mitochondria [13]. The NAD+ metabolism and function of mitochondria can be affected by KP by regulating ROS concentration. The KP and NAD+ are divided to microglial cells and astrocytes in the CNS, with only a few KP metabolites, such as KYN, TRP, and 3-HK, able to cross the BBB [13]. The different expressions of IDO-1, IDO-2, and TDO2 in the tissue govern the entry of TRP into KP [14]. QUIN, the major precursor of NAD+ in KP, is not contained in the liver, even post TRP loading, which depicts NAD+ processing in this tissue [15]. After accumulating in activated immune cells, QUIN might function as a reservoir for production of NAD+, further providing a substrate for the activity of PARP, which is required to fight the DNA damage done by elevated oxidative stress during immune activity. As an alternative, the cells of the immune system may eliminate QUIN, and use its pro-oxidant features to attack the invading pathogens [13].
The immune tolerance, in association with pregnancy and severity of tumors, is developed by induction of indoleamine-2,3-dioxygenase (IOD-1), which regulates activation of KP and mitigation of TRP [16][17]. IDO-1 is a rate limiting enzyme of KP, which is the primary pathway of TRP catabolism. IDO-1 has been found to be involved in immune tolerance and contributes to the maintenance of T cell homeostasis of self-antigen tolerance during the inflammatory conditions [18]. Its neuronal functions have initially targeted its involvement in brain tumors and autoimmune diseases. The ratio of KYN to TRP is used to assess the activity of IDO-1 because of the ability of IDO-1 to convert TRP to KYN [18]. The concentration levels of KYN and TRP in the serum and CSF of 22 patients with PD was compared with 11 control subjects, where the ratio of KYN to TRP was found to be elevated in both the serum and CSF of patients with PD [19]. In addition to this, the serum and CSF ratio of KYN to TRP correlates with concentration of neopterin, depicting activation of immune system and is also associated with the severity of the disease [18].
The clonal expansion of T cells is completely hindered by activation of IDO-1 in the dendritic cells [20]. The three theories proposed are: TRP degradation-mediated suppression of T cells proliferation by ameliorating the supply of this important amino acid; suppression of some immune cells by certain downward KP metabolites; and KP metabolites, such as kynurenine (KYN), cinnabarinic acid (CA), and KYNA, promote AhR activation, which facilitates the dendritic cell-mediated production of transforming growth factor beta-1 (TGFβ-1) resulting in development of tolerance towards the disease [21]. The neuronal KP expression is yet to be further explored; however, the enzyme moieties associated with KP are completely expressed in monocytes such as macrophages and microglial cells [22][23]. These enzymes were reported to be only partly present in oligodendrocytes, neurons, endothelial cells, and astrocytes in humans.
The astrocytes and neuronal cells are considered to be neuroprotective, whereas the infiltrating macrophages and activated microglia are considered to be neurotoxic [24]. Therefore, multiple products of KP can have neuroprotective, neurotoxic, and immunomodulatory effects [25]. QUIN, an excitotoxin, is reported to be the most significant among them, which results in the death of neurons [26][27]. Only infiltrating macrophages and activated microglia, and not astrocytes and neurons, are responsible for the production of QUIN in the brain [22]. The astrocytes produce KYNA, which antagonizes the effects of ionotropic glutamate receptors resulting in hindering the actions of QUIN as well as excitotoxins. However, in diseased conditions, the production of QUIN is in excess, unlike KYNA, which fails to sufficiently block QUIN [28]. The two KP metabolites exhibit a sharply contrasting aspect of characteristics; therefore, they are depicted to play a Janus-faced role in PD.
Another intermediate metabolite of KP is 3-hydroxykynurenine (3-HK), which exerts neurotoxic actions and produces free radicals at nanomolar concentrations, resulting in neuronal degeneration and apoptosis, and also causes elevated metal toxicity in rat astrocyte culture [29][30]. Additionally, hydrogen peroxide and superoxide ions are produced by 3-HK, which results in induction of copper-dependent damage to oxidative proteins [30][31]. The neurotoxic effects of QUIN can be effectively synergized by 3-HK [28]. The human primary neurons produce an endogenous metal chelator, picolinic acid in micromolar concentrations, which exerts neuroprotective actions [24][32]. It is noteworthy, that KP results in the generation of KYNA or NAD+ or picolinic acid in physiological states and under inflammatory conditions, QUIN is over-expressed along with other pro-inflammatory and neurotoxic moieties [33].
For many years, many investigations have been targeting the initial steps in KP, comprising of TRP transformation to KYNA, corresponding to activity of IDO-1 [28]. Over the last ten years, the significance of the middle and downstream steps of KP has risen to higher levels. The intermediate metabolites of KP have been reported to play a significant role in neurotoxicity, as per multiple studies, such as immunomodulatory role of 3-HK as well as neurodegeneration inducted by CA and 3-hydroxyanthraanilic acid (3-HANA) [24]. Figure 1 provides a layout of the KP and its different steps. 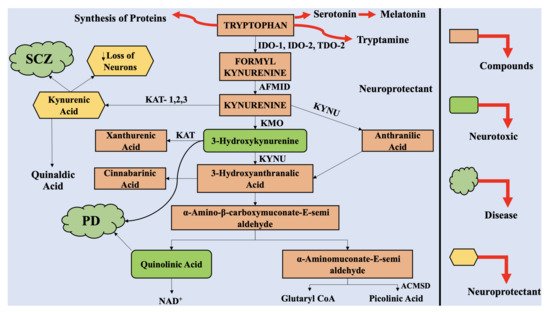 3. The Interaction of Kynurenine Pathway with the Central Nervous System

The physiological concentration of QUIN in the cerebrospinal fluid (CSF) and brain is approximately 100 nM, and it exhibits hormesis action. QUIN treatment results in elevation of NAD+ production, within the human neuronal cells, alongside enhanced proliferation of stem cells [34]. However, the concentration of QUIN is increased to 1200 nM in disease conditions, which can lead to acute, chronic, or progressively severe functions of neurons or death of neuronal cells by a minimum of nine varying processes [35]. At pathological concentrations, between 150 to 1200 nM, QUIN functions as NMDA receptor agonists. Previously, two studies reported the selective actions of QUIN on NMDA receptor, along with differences in actions, mediated by QUIN on NMDA, at particular neuronal areas [36]. Vandresen-Filho et al. confirmed the above statement and reported that the hippocampus, cerebral cortex, cerebellum, and striatum have varying susceptibility towards QUIN induced oxidative stress [37]. The neuronal cells contained in the striatum, hippocampus, and neocortex, exhibit sensitivity towards QUIN; however, the neurons present in the spinal cord and cerebellar region are comparatively less sensitive. These differences are associated with alterations in the configurations of the NMDA receptor [38].

It was depicted that the motor neuron could be completely protected from QUIN-mediated excitotoxicity by using NMDA receptor (NMDAR) antagonist combinations [39]. QUIN has the ability to cause elevated micro-environment glutamate levels and neurotoxicity by enhancing the release of glutamate by neuronal cells, blocking its astrocyte-mediated uptake and inhibiting astroglial glutamine synthetase enzyme [40].

The cellular agents, which provide support to the neuronal cells, i.e., astrocytes, are also altered by QUIN, which also dysregulated astroglial functions and promote death of the glial cells [43]. As a result, dysregulated function and death of neuronal cells take place [28]. Furthermore, QUIN exerts proinflammatory effect on astrocytes, followed by generation of proinflammatory cytokines as well as chemokines, such as monocyte chemotactic protein 1 (MCP-1), IL-1β, and IL-8 in astrocytes [40]. The activity of glutamine synthetase is retarded by QUIN in a dose dependent manner in the astrocytes in humans, which leads to disruption of glutamine/glutamate cycle [40].

More
© Text is available under the terms and conditions of the Creative Commons Attribution (CC BY) license (http://creativecommons.org/licenses/by/4.0/)
Upload a video for this entry
Information
Subjects: Clinical Neurology
Contributor MDPI registered users' name will be linked to their SciProfiles pages. To register with us, please refer to https://encyclopedia.pub/register :
Simona Gabriela Bungau
View Times: 50
Revisions: 2 times (View History)
Update Time: 02 Aug 2021
Table of Contents
1000/1000
Hot Most Recent