Submitted Successfully!
Thank you for your contribution! You can also upload a video entry related to this topic through the link below:
https://encyclopedia.pub/user/video_add?id=12562
Check Note
2000/2000
Cell-Surface Engineering
Edit
Upload a video
This entry is adapted from 10.3390/jfb12030041

Literature in the field of stem cell therapy indicates that, when stem cells in a state of single-cell suspension are injected systemically, they show poor in vivo survival, while such cells show robust cell survival and regeneration activity when transplanted in the state of being attached on a biomaterial surface.

Since it was discovered that various regenerative cell sources can exert essential functions to promote the regeneration of tissues damaged by injury or disease, the number of clinical applications of cell therapeutic agents has continued to increase. Although many cell-based therapies can provide valuable functionality that cannot be exerted by any other therapeutic options, the duration of the efficacy could be limited due to the fact that an in vivo environment is not favorable for the survival of the transplanted cells. Cell encapsulation can increase the duration of cell survival by providing protection from unfavorable environments.
Cell-surface modification or encapsulation technology was originally developed with microbes such as yeasts [1] and Escherichia coli [2]. Various materials such as silica gel [3], poly(styrene sulfonate sodium salt), poly(allylamine hydrochloride) [1], chitosan, alginate, hyaluronic acid [2], poly(diallyl dimethylammonium chloride) [4], and silk [5] were adopted for encapsulation of microbes. However, to apply the cell encapsulation technology for mammalian cells, the biocompatibility of the encapsulation process and its effect on cell characterization should be considered.
There are several previous reports on mammalian cell encapsulation, which show diversity in the approaches and the biomaterials used. Such diverse cell encapsulation technologies could be classified into several categories based on cellularity (single-cell/multi-cellular) and the dimension of encapsulation thickness (nano-encapsulation/micro-encapsulation) [6]. In each category, the extent of cell–cell contact and cell–ECM interaction can vary based on the encapsulation method and the characteristics of the biomaterials (Figure 1).

Figure 1. Three types of cell encapsulation according to the thickness of the encapsulation wall and cellularity. Reprinted and modified with permission from reference [6]. Copyright 2018 Wiley.
The ultimate purpose of mammalian cell encapsulation is to maximize the survival and functionality of the cells for therapeutic purposes. Matrix molecules incorporated in the encapsulation hydrogel binds to matrix receptors on the cell plasma membrane surface and activates a signal transduction pathway leading to Akt protein phosphorylation—the marker for cell survival activation—which exerts an inhibitory effect on apoptosis induction [7][8].
Components and methods of cell encapsulation have been developed to meet the challenges posed in the application for target therapeutic purposes. The functionality of systemically transplanted MSCs (mesenchymal stem cells) administered through intravascular injection might be potentiated through single-cell nanoencapsulation [7][9]. For the mass delivery of therapeutic cells, multi-cellular encapsulation has been adopted. For example, the intended therapeutic activity of islet β-cells is the production of insulin. To stabilize and secure the activity of the enzyme production, islet β-cells were micro-encapsulated in a multicellular state [10].
The literature reporting the promising outcome obtained from multicellular micro-encapsulation indicates that the cell encapsulation technology exists right next to the borders of tissue engineering. The technologies developed for cell encapsulation can benefit tissue engineering, while also working the other way around. However, cell encapsulation technology covers a broad area, from the scale-up preservation of cells to its therapeutic application. Encapsulated cells could be utilized for tissue engineering by upstream production and application. Cell encapsulation can serve not only a tissue regeneration purpose, but also specific therapeutic purposes involving immune cells [11].
As much as the subjected cells are varied, the methods of cell-surface engineering are diverse. Functional small molecules could be tethered on the cell surface by covalent conjugation methods such as chemical conjugation, enzymatic/metabolic conjugation, physical conjugation, or UV-mediated grafting. Several review papers have covered diverse techniques adopted for cell-surface engineering [12][13][14].

BM-MSCs have immunomodulation characteristics and therefore were used for the treatment of various immune-related diseases, such as graft versus host disease (GvHD), sepsis, and therapies for autoimmunity disorders (such as type 1 diabetes and Crohn’s). The mode of action includes communication by cell–cell interaction and paracrine signaling (secretion of soluble factors) [15]. BM-MSCs administered to an experimentally established GVHD model showed massive programmed cell death. Although BM-MSC-mediated immunosuppression can be exerted through a contact-independent mechanism [16], a significant number of cells still need to survive after in vivo administration to exert their function. BM-MSCs were proven as promising therapeutic options to acute GVHD when they do not respond to steroid regimens [17][18]. Through the same mechanism, BM-MSCs also ameliorate the pathological symptoms of sepsis, which involves whole body inflammation caused by blood injection [19]. Other studies have provided evidence that BM-MSCs can not only attenuate the severity of the end-organ injury but also effectively ameliorate septic coagulopathy, alleviate vascular damage, reduce inflammation, attenuate acute lung injury, and improve the survival rate [20][21]. As shown by recent clinical trials, osteoarthritis patients injected with in-vitro-expanded BM-MSCs showed pain reduction and the recovery of functionality [22]. The efficacy of BM-MSCs’ regenerative therapy is based on the trophic effect that stimulates neighboring parenchymal cells to start repairing damaged tissues, and its target diseases include ischemic stroke, arterial disease, and myocardial infarction [23]. However, IV-injected MSCs barely reach the intended target tissue because they are exposed to high shear stress in circulation, which results in poor cell survival. Cells encapsulated with a dextran-based hydrogel and alginate show better survival and cell stabilization [24][25].
Surface-engineered MSCs show better cell survival. BM-MSCs encapsulated with hydrogels such as dextran or alginate showed maximum stability in cell survival since such hydrogel-based encapsulations result in thick and stable hydrogel layers around the cells. However, a thick encapsulation wall results in an increased diameter of the encapsulated cell composite and increases the risk of vein occlusion upon IV injection, thereby excluding the possibility of systemic injection. [24][25]
Surface modification of BM-MSCs by LbL assembly using PLL/HA resulted in nano-thin films around the cell plasma membrane surface. LbL-assembled layers resulted in a 20-nm-thick discontinuous and patch-like structure. Although this structure seemed unsturdy, both in vitro and in vivo cell survival was significantly potentiated, and improved recruitment to the wound site was observed in the muscle injury animal model (Figure 2) [7][9][26]. 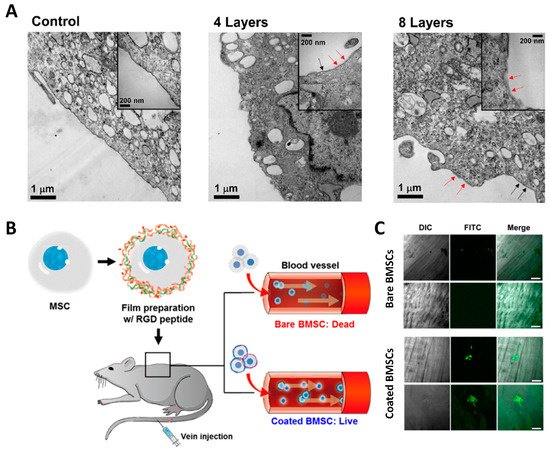 Diseases associated with the vascular system, particularly those associated with cardiac and cerebrovascular disease is the leading cause of death worldwide. The current therapeutic approach includes pharmacological treatment that can involve side effects and surgical revascularization. Because these approaches cannot completely reverse pathophysiology, many experimental therapeutic approaches utilize endothelial progenitor cells (EPCs) to treat cardiovascular diseases (CVDs). Active EPCs served as a potent source of the essential mediators of a new vessel formation [33].
In a murine model of peripheral limb ischemia, human EPC injections improved tissue reperfusion, and limb salvage rate was significantly increased [34]. In clinical trials, the injection of EPCs to idiopathic pulmonary hypertension patients showed significant improvement in terms of pulmonary artery pressure, pulmonary vascular resistance, and cardiac output [35].
However, a low retention rate due to cell scattering after injection was still a major concern. To stabilize cell retention and survival, various approaches were employed with EPC transplantation. Hyaluronan (HA) was known to increase the proliferation of human umbilical vein endothelial cells (HUVECs) and protect apoptosis. Injecting HUVECs with HA showed a significantly improved outcome in restoring blood perfusion and salvaging the ischemic limb when compared with HUVECs injected without HA [36].
The use of micro-encapsulation provided a cyto-protective effect to endothelial cells. When the elements of the encapsulation were composed to exert multifunctionality, encapsulated cells proliferated in a time-dependent manner and eventually released from the encapsulation and migrated to a nearby site in longer time points. The injection of multifunctional microgels encapsulating endothelial cells and growth factors induced neovascularization in animal models of hindlimb ischemia [37][38].

Although liver tissue shows the great regenerative capacity and spontaneous recovery upon mild damage or partial hepatectomy, acute/chronic liver failure, metabolic disorders such as Crigler-Najjar syndrome type 1 (CN-2), or urea cycle defects with hepatic basis can be a life-threatening situation, and organ transplantation is needed [39].
If cell therapy could replace organ transplantation, it could be a better therapeutic option because cell therapy involves a less invasive transplantation procedure, and the cryo-preserved cell source makes it immediately available in an emergency [40]. An in vitro study showed that hepatocytes encapsulated using alginate-poly-L-lysine-alginate showed a higher albumin secretion at 2 weeks of culture when compared with non-encapsulated free primary hepatocytes. The transplantation of such encapsulated hepatocytes increased the survival of mice. The encapsulation technique even exerted a cyto-protective effect against cryo-injury [41][42]. Thick hydrogel layer-encapsulation can exert a beneficial role by holding and slowly releasing paracrine factor, which can be essential for a hepatocyte’s survival. In recent experimental studies, hepatocytes encapsulated in alginate microbeads were transplanted to a mouse acute liver failure model and resulted in improved survival [43][44][45].
However, the same challenges exist as in the case of islet beta-cell encapsulation. The immunosuppression regimen to evade immune rejection is recognized as a high-risk factor for patients with coagulopathy. Additionally, a sufficient amount of target area needs to be secured for safe engraftment and further growth of the organ, which will be essential for patients’ long-term survival. Therefore, further research is needed to meet those challenges for in vivo transplantation and practical utilization in clinical situations.

Neural progenitor cells (NPCs) or neural stem cells (NSCs) are stem cells that can differentiate into the major cell types of the central nervous system. The potential of NPCs to directly replace damaged tissue make it a promising therapeutic cell type for many neurodegenerative diseases such as Parkinson’s disease, Alzheimer’s disease, or spinal cord damage.
Although NPCs have high therapeutic potential, they show an inferior survival rate upon transplantation. Additionally, the biochemical and biomechanical environment is important for retaining their functionality, such that neuronal stem cells (NSCs), including NPCs, are maintained in a spheroid culture to retain their differentiation potential. Especially, matrix components generated by cells during spheroid culture induce three-dimensional cell–cell interactions and cell–ECM interactions, which play important roles in cells’ long-term survival and stemness [46]. When NPCs were encapsulated by a 3D network of nanofibers containing laminin epitope (isoleucine-lysine-valine-alanine-valine, IKVAV) on their surface, the cells rapidly differentiated into neurons in a laminin or soluble peptide-dependent manner [6]. As for their biomechanical property, NPCs cultured in 3D hydrogels with higher degradability showed proliferation three days after the encapsulation, while NPCs encapsulated in a low degradable hydrogel did not show proliferation over two weeks. Both the degradability and remodeling time exerted by the hydrogel encapsulation significantly impact NPCs’ differentiation capacity [47]. Therefore, developing an encapsulation technique with the right biomaterial components for NPCs might result in excellent long-term viability and functionality.

More
© Text is available under the terms and conditions of the Creative Commons Attribution (CC BY) license (http://creativecommons.org/licenses/by/4.0/)
Upload a video for this entry
Information
Subjects: Engineering, Biomedical
Contributor MDPI registered users' name will be linked to their SciProfiles pages. To register with us, please refer to https://encyclopedia.pub/register :
EunAh Lee
View Times: 52
Revisions: 2 times (View History)
Update Time: 29 Jul 2021
Table of Contents
1000/1000
Hot Most Recent