Submitted Successfully!
Thank you for your contribution! You can also upload a video entry related to this topic through the link below:
https://encyclopedia.pub/user/video_add?id=12554
Check Note
2000/2000
Resveratrol and Human Skin Lightening
Edit
Upload a video
This entry is adapted from 10.3390/antiox8090332

Resveratrol is a polyphenol compound found in many edible plants such as Vitis vinifera, and its inhibitory effects on the catalytic activity, gene expression, and posttranslational modifications of tyrosinase, a key enzyme in the melanin biosynthetic pathway, provide a mechanistic basis for its antimelanogenic effects seen in melanocytic cells, three-dimensionally reconstituted skin models, and in vivo animal models. Recent clinical studies have supported the efficacy of resveratrol and its analogs, such as resveratryl triacetate (RTA) and resveratryl triglycolate (RTG), in human skin lightening. These findings suggest that resveratrol and its analogs are potentially useful as skin lightening agents in cosmetics.

In human skin, melanin is produced in a specialized organelle called “melanosome” in the melanocytes, which localizes in the basal layer of the skin epidermis [1]. Mature melanosomes filled with melanin are transferred from a single melanocyte, via dendrites, to several keratinocytes in the outer proximity, distributing melanin throughout the epidermis [2]. Melanin is an effective absorbent of UV, reducing the risk of photoaging and photocarcinogenesis [3], and is a key player in maintaining skin homeostasis [4].

Unwanted abnormal skin pigmentations are clinically and aesthetically significant conditions that can cause mental stress and lower the quality of life [5]. Various approaches are used to control hyper- and hypo-pigmentation in dermatology and cosmetology. A variety of natural and synthetic compounds that inhibit the catalytic activity of tyrosinase, which is a key enzyme in the melanin biosynthesis, have previously been reported in the literature [6][7], but their clinical efficacies are largely unknown.

Resveratrol (3,5,4′-trihydroxy-trans-stilbene) is a polyphenolic compound found in various plants, including grapes, berries, and peanuts [8][9][10][11]. It is believed to act as a phytoalexin in several plants, providing defense against attack by insects and pathogens [12][13].

Evidence supporting its antimelanogenic activity has accumulated in the last decade [21][22]. As an approach to enhance the stability and efficacy of resveratrol, our research team developed its analogs, resveratryl triacetate (RTA) and resveratryl triglycolate (RTG), and undertook human trials to evaluate their skin lightening efficacy [23][24][25]. Herein, we scrutinize recent literature on the anti-melanogenic activities and skin lightening efficacies of resveratrol and its analogs to examine their potential as active ingredients for skin lightening in the cosmetics industry.

2. Resveratrol as a Tyrosinase Inhibitor

3. Antimelanogenic Mechanisms of Resveratrol and Its Analogs

Resveratrol inhibits MITF promoter activity induced by UV or forskolin in B16 cells [52]. Resveratrol, resveratryl triacetate (RTA), and resveratryl triglycolate (RTG) lower the mRNA and protein levels of tyrosinase, DCT, and MITF in human epidermal melanocytes [40][50]. Resveratrol and its trimethyl ether decrease the tyrosinase protein level and tyrosinase activity in B16 cells stimulated by α-MSH [51]. Therefore, resveratrol and its analogs are assumed to reduce the gene expression of MITF and downstream melanogenic enzymes by inhibiting the cAMP-dependent pathway.

Resveratrol activates sirtuin 1, which in turn activates transcription factors p53 and forkhead box O (FOXO) [53]. Resveratrol can confer antimelanogenic activity through a FOXO3a-dependent mechanism [54]. Resveratrol is also known as a potent inducer of autophagy [55], which is a lysosome-dependent mechanism for removing misfolded or damaged proteins or unnecessary organelles [56]. Resveratrol increased expression levels of autophagy-related gene 5 (ATG5) while decreasing MITF, tyrosinase, and TYRP1 in Melan-A cells stimulated by α-MSH [57]. Small interfering RNA-mediated depletion of ATG5 rescued the expression of MITF, tyrosinase, and TYRP1 in the presence of resveratrol, indicating that autophagy is associated with the antimelanogenic effects of resveratrol. 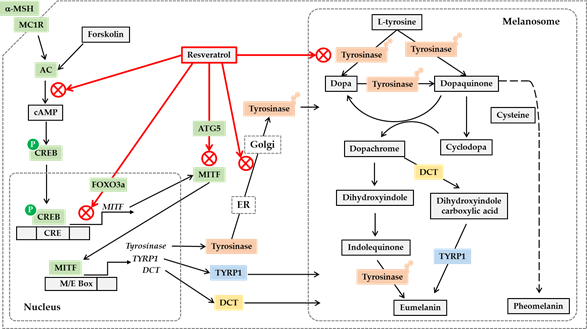 Figure 1. Potential mechanisms for the antimelanogenic action of resveratrol. On the binding of a-melanocyte stimulating hormone (a-MSH) to the melanocortin 1 receptor (MC1R) and subsequent activation of cyclic AMP (cAMP)-producing adenylate cyclase (AC) leads to the phosphorylation of cAMP-responsive element-binding protein (CREB) by protein kinase A. Phosphorylated CREB enters the nucleus and binds to cAMP response elements (CRE) on the promoter of its target genes including microphthalmia-associated transcription factor (MITF), activating their gene expression. Resveratrol can inhibit the gene expression of MITF, tyrosinase, tyrosinase-related protein 1 (TYRP1) and dopachrome tautomerase (DCT) stimulated by a-MSH or forskolin, a director activator of AC, which is mediated by a cAMP-dependent mechanism. Resveratrol can suppress MITF activation by a FOXO3a-dependent mechanism. Resveratrol can also stimulate autophagy-related gene 5 (ATG5) expression inducing autophagy, and reduce the protein levels of MITF and tyrosinase. The antimelanogenic enzymes such as tyrosinase undergo posttranslational modifications in the endoplasmic reticulum (ER) and Golgi, and resveratrol can inhibit these processes. Resveratrol can also inhibit enzyme reactions of tyrosinase involved in the synthesis of eumelanin and pheomelanin in the melanosomes. Although the synthetic route of pheomelanin is simply drawn here, it is very complicated and involves many enzymes and metabolites. There are many other pathways that are involved in the regulation of cellular melanin synthesis but are not covered in this figure.

In vivo experiments and human tests on the skin lightening and antiaging activity of resveratrol and its analogs are listed in Table 1. In dark-skinned Yucatan swine, topical treatment with 1% resveratrol twice a day, 5 days per week, for 8 weeks resulted in visible skin lightening without signs of irritation or other undesired effects [52]. In another experiment using light-skinned Yucatan swine, skin tanning was induced by exposing them to one minimal erythema dose (MED) of UVB, once per day, on three alternate days. Topical treatment with 1% resveratrol once daily for 2 weeks, immediately after each UVB exposure and on non-UVB exposure days, reduced the UVB-induced pigment deposition in Yucatan swine.

Table 1. In vivo and clinical studies on the skin lightening efficacy of resveratrol and its analogs.

The effects of resveratrol against skin pigmentation and sunburn caused by repetitive UV irradiation were examined in a human trial employing 15 healthy volunteers [22]. Six sites on the non-exposed dorsal skin of each volunteer were exposed to solar simulating UV at a dosage of 1.5 MED for 4 consecutive days, and different test materials were topically applied immediately after each UV exposure.

The skin color can be expressed using the Commission Internationale de l’Eclairage Lab color space composed of the degree of lightness (L*), degree of green to red (a*), and degree of yellow to blue (b*) [64]. In this study, the skin color parameters, L*, a*, and b were measured using Spectrophotometer® CM-2500d (Minolta, Tokyo, Japan) [64].

As an approach to improve the stability of resveratrol as an active ingredient in cosmetics, resveratrol was acetylated to RTA as a “prodrug” form [40][65]. RTA showed higher stability in solutions, lower cytotoxicity, and a similar inhibitory effect on melanin synthesis in cultured melanocytes, as compared to resveratrol itself [40]. It is assumed that the acetylated compound may be converted to resveratrol by the esterase enzymes in cells.

The safety and skin lightening efficacy of RTA were investigated in human studies [23][24]. The primary skin irritation potentials of resveratrol and RTA were assessed at 0.1% and 0.5% concentrations in thirty-three healthy women [23], via a closed patch testing method [66][67]. On testing, resveratrol was observed to induce weak skin irritation at 0.5%, whereas RTA did not induce any adverse skin reactions [23].

The human skin lightening efficacy of RTA was evaluated [23] using the artificial tanning and natural hyperpigmentation models [68][69]. In all, 22 women with Fitzpatrick skin types III or IV were enrolled in the test using the artificial tanning model. The volunteers were randomly divided into two groups, and depending on the group, each of the two test sites in each volunteer received either the test product containing 0.4% RTA or the control product, twice daily, for 8 weeks. The skin color was represented by the individual typology angles (ITA°) which were calculated using the equation: ITA° = (arc tangent [(L* − 50)/b*]) 180/3.14159. [70]. The higher the ITA° value, the lighter the skin color.

In another study using the natural hyperpigmentation model, 21 women were enrolled. The volunteers were divided into two groups and depending on the group, the right or left sides of the face of each volunteer received either the test product containing 0.4% RTA or the control product, twice daily, for 8 weeks. The pigmentation intensity of the highly pigmented area decreased by 2.67% and 1.46% in the test and control groups, respectively, and the difference was statistically significant (p < 0.05). These studies supported the human skin lightening efficacy of topically applied 0.4 % RTA.

RTG is a new hybrid compound between resveratrol and glycolic acid [50]. The resveratryl moiety of RTG was expected to reduce the production of new melanin and the glycolic moiety was expected to remove the keratin that previously accumulated melanin. RTG inhibited tyrosinase activity in vitro and MITF and tyrosine gene expression, suppressing cellular melanin synthesis as effectively as, or slightly more effectively than, resveratrol and RTA [50].

The depigmenting efficacy of RTG was tested in a human trial using a UV-induced artificial tanning model [25]. The melanin index decreased from 205 to 163 in the test group and to 172 in the control group, and the difference between these two groups was statistically significant (p < 0.05). Analysis of ITA° as a skin color index showed that the test product containing 0.4% RTG and the control product increased ITA° by 24.42% and 17.81% in 6 weeks and by 28.96% and 22.06% in 8 weeks, respectively. The intergroup differences at each time point were statistically significant (p < 0.05). The pigmentation degrees visually assessed by two experienced examiners were also supportive of the clinical efficacy of RTG. The test product containing 0.4% RTG and the control product decreased the pigmentation degree by 31.9% (from 7.05 to 4.98) and 29.4% (from 7.11 to 4.84) in 8 weeks, respectively. The intergroup difference was statistically significant (p < 0.05).

In conclusion, the results from in vivo studies or clinical studies are supportive of the human skin lightening and/or antiaging efficacies of resveratrol and its analogs. In animal studies and in clinical trials, 1% resveratrol has been shown to reduce pigmentation induced by UV when it is applied topically to the skin. Resveratrol is considered to attenuate cellular melanin synthesis through inhibition of tyrosinase catalytic activity, and inhibition of processes such as tyrosinase gene expression, tyrosinase protein maturation, and autophagy. Although there is a lack of direct evidence, resveratrol might interfere with melanosome biogenesis because it reduced the activity of MITF, which is a key regulator of melanosome biogenesis as well as melanogenesis.

More
© Text is available under the terms and conditions of the Creative Commons Attribution (CC BY) license; additional terms may apply. By using this site, you agree to the Terms and Conditions and Privacy Policy.
Upload a video for this entry
Information
Subjects: Biology
Contributor MDPI registered users' name will be linked to their SciProfiles pages. To register with us, please refer to https://encyclopedia.pub/register :
Yong Chool Boo
View Times: 521
Revisions: 2 times (View History)
Update Time: 29 Jul 2021
Table of Contents
1000/1000
Hot Most Recent