Submitted Successfully!
Thank you for your contribution! You can also upload a video entry related to this topic through the link below:
https://encyclopedia.pub/user/video_add?id=12492
Check Note
2000/2000
Eating Disorders and Gastrointestinal Diseases
Edit
This entry is adapted from 10.3390/nu11123038

Eating disorders (ED) are frequently associated with a wide range of psychiatric or somatic comorbidities. The most relevant ED are anorexia nervosa (AN), bulimia nervosa (BN), and binge eating disorders (BED). Patients with ED exhibit both upper and lower gastrointestinal (GI) symptoms. Evidence of alterations throughout the GI tract in ED will be analyzed given the role of the GI tract in food intake and its regulation. It remains a matter of debate whether GI disorders are inherent manifestations of ED or the results of malnutrition occurring from ED. Moreover, recent clinical studies have highlighted the growing role of intestinal microbiota in the pathogenesis of ED, making it possible to hypothesize a modulation of intestinal microbiota as a co-adjuvant to standard therapy.

Eating disorders (ED) are a crucial health problem in Western countries and mainly in the young population [1]. ED are very complex, lacking a pathophysiological definition, and are clinically recognized by strict diagnostic criteria of the Fifth Edition of the Diagnostic and Statistical Manual of Mental Disorders (DSM-V), released by the American Psychiatric Association [2]. Anorexia nervosa (AN), Bulimia nervosa (BN) and Binge Eating Disorder (BED) are the three major categories of ED (Figure 1). 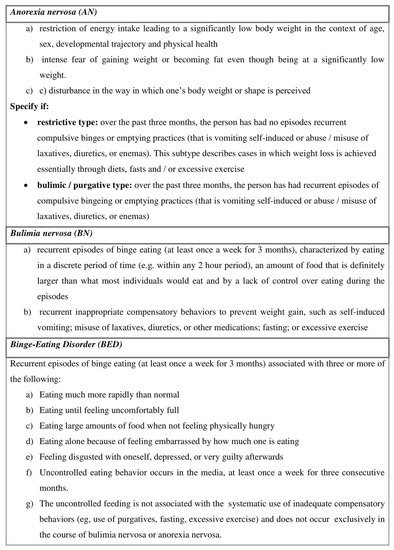 Figure 1. The description of the three main types of Eating Disorders (adapted by the Fifth Edition of the Diagnostic and Statistical Manual of Mental Disorders (DSM-V), released by the American Psychiatric Association [2].
ED can be associated with anxiety or mood disorders; insomnia; as well as somatic complications such as cardiac alterations, hormonal imbalances and also a wide range of gastrointestinal (GI) symptoms [3].
Prevalence estimate of lifetime AN is 0.8% [4]. The overall incidence rate of AN is around 7 per 100,000 persons; however, it is higher in 15–19 year old girls reaching 109.2 cases per 100,000. The incidence is increasing in Italy and other Western countries probably due to earlier diagnosis or earlier onset [5][6].
The prevalence of BN is 0.28% [4]. The highest incidence rate of BN is 300 per 100,000 persons in women aged between 16 and 20 [7], although the age at onset is decreasing [5].
BED are described in 0.85% of the population [4][8] and are frequently associated with medical comorbidities, especially obesity and its complications such as Type II diabetes mellitus, hypertension, and dyslipidemia [9]. Furthermore, BED may occur in a subset ranging from 27% to 47% in severely obese persons undergoing bariatric surgery [10].
The previous edition of DSM (DSM-IV) [11], classified as “Eating Disorders Not Otherwise Specified (EDNOS)”, is the ED that does not satisfy all the diagnostic criteria for AN or BN. Previously, EDNOS contained a huge and varied group of individuals and was the most commonly diagnosed ED. However, the DSM-V revised this ED type and called it “Other Specified Feeding or Eating Disorder” (OSFED). Moreover, the DSM-V introduced the definition of Avoidant/restrictive food intake disorder (ARFID) that was distinct from AN and BN in that there is no body image disturbance [2].
The first description of AN in the 19th century revealed that the sufferers’ reasons for self-starvation generally were strictly connected to inappetence, feelings of fullness and abdominal pain or constipation [12][13]. Since then, a wide range of GI symptoms in ED patients has been described [14].
More recently, a prospective study reported that the majority of ED patients complained of postprandial fullness (96%) and abdominal distention (90%) [15], and pooled GI symptoms were significantly correlated with hypochondriasis, producing a deleterious influence of psychiatric comorbidities on GI discomfort [15].
BED co-occurs with a variety of psychiatric disorders, especially mood (54.2%), anxiety (37.1%) and substance use disorders (24.8%) [16]. The prevalence of psychiatric comorbidities in women with BED is higher compared to those with AN and BN [17].
Furthermore, in ED patients a significant alteration of physical health and psychosocial functioning has been described [18].

The underlying mechanisms that could explain the link between ED and the GI tract are numerous and only partially understood. It has been suggested that ED behavior including vomiting, laxative abuse, and restrictive food intake has a strong impact on the function of the GI tract; conversely, disablement of the GI function such as disordered motility can bolster typical symptoms of ED such as loss of appetite, self-induced vomiting, dysphagia, constipation, and bloating [15][19]. In addition, the malnutrition occurring in ED [20], producing metabolic myopathy, as well as electrolyte depletion, seems to dramatically influence the impairment in gastric motility, gastric emptying and intestinal transit [21].
However, it is noteworthy that several studies have excluded the presence of structural or metabolic GI disorders in the majority of ED patients [22][23][24][25][26][27]. GI symptoms in ED patients usually reflect an impaired GI function [14]. Conversely, a structural illness like celiac disease may increase the likelihood of developing an ED because the patient pays attention to food intake, body weight and food-related GI symptoms that may result in chronic dietary restriction [28].
The arrival of food in the GI tract produces a multiplicity of signals rising from gastric distension, nutrient and non-nutrient elements, and also gut hormones released from the enteroendocrine cells of the GI wall [29][30][31].
The gradual distension of the gastric wall to accommodate food gives rise through the stimulation of the mechano-sensitive vagal afferent fibers [32][33], to the perception of fullness; this plays a central role in controlling meal size [34][35]. As gastric emptying proceeds, the signals rising from mechanical distension reduce gradually, and it moves to the antrum and then progresses into the small intestine. The antrum has a crucial role in the perception of fullness and meal termination [36]. Simultaneously, nutrients influence postprandial GI functions, such as GI motility and GI hormone release, with effects on appetite perceptions and consequent energy intake linking central perceptions with the GI function [37]. Dysregulations of these physiological processes can adversely affect eating behavior or provoke GI symptoms, such as exaggerated postprandial fullness, nausea and bloating [38][39].
Considering the vastness of the issue, we do not cover triggering factors (e.g., stress, emotions) and other comorbid conditions (anxiety, depression, addiction) that may affect at the same time eating behavior and digestive function. This topic was described elsewhere [40][41].
In this review, the evidence of alterations throughout the GI tract will be analyzed, taking into account the role of the GI tract as the organ system associated with food intake and its regulation. Similarly to Rome Criteria, clinical features were identified within each region of the GI tract [42]. Moreover, it is a matter of debate if GI symptoms are clinical manifestations correlated to ED characteristics, for example, ED type [20].

ED are very complex disorders associated with high rates of morbidity and mortality.
After decades of investigation in the ED field, mechanisms underlying the abnormal behavior that characterize ED, for example eating in the absence of hunger and avoiding food in the presence of starvation, are still uncertain. GI symptoms occur very commonly in ED; however, it remains a matter of debate if GI disorders are inherent manifestations of ED or the results of malnutrition occurring in ED.
Growing interest exists in the role of intestinal microbiota in the pathogenesis of ED, in its changes through refeeding practices, and especially in the modulation of intestinal microbiota using nutritional interventions or psychobiotic application as a co-adjuvant to ED standard therapy. Although challenging for the clinicians, GI disorders in patients with ED should be investigated as well as a screening for ED encouraged in individuals seeking treatment for unexplained GI complaints. This will help to better address therapeutic issues in these difficult medical conditions. Future studies are needed to add new knowledge in this field, possibly creating new synergies among a broad array of scientists and clinicians.

More
© Text is available under the terms and conditions of the Creative Commons Attribution (CC BY) license (http://creativecommons.org/licenses/by/4.0/)
Upload a video for this entry
Information
Subjects: Gastroenterology & Hepatology
Contributor MDPI registered users' name will be linked to their SciProfiles pages. To register with us, please refer to https://encyclopedia.pub/register :
Mario Gagliardi
View Times: 58
Revisions: 2 times (View History)
Update Time: 28 Jul 2021
Table of Contents
1000/1000
Hot Most Recent