Submitted Successfully!
Thank you for your contribution! You can also upload a video entry related to this topic through the link below:
https://encyclopedia.pub/user/video_add?id=12374
Check Note
2000/2000
Hybrid Distribution Transformers
Edit
This entry is adapted from 10.3390/en14051215

Distribution transformers are one of the pillars of the distribution grid. They are the interface between the medium and low-voltage grid, stepping-down the voltages to a safe and usable range for the end-users.

Distribution transformers are characterized by being a highly-robust and low-cost solution, being available in different winding configurations and power ratings according to the grid requirement and mounting type [1]. Transformers have an average lifetime above 35 years under rated conditions [2].

Power quality is a term employed when referring to the power system voltage and current waveform quality at different points of the grid [3]. Low power quality phenomenons can be generated by the users, for example when consuming nonsinusoidal and unbalanced currents. Weak grids can be a source of low power quality, providing unbalanced and variable frequency voltages, among others. IEEE Std 1159-2019 and IEEE Std 519-2014 give guides on power quality measurements and recommended practice to comply and guarantee a good quality service [4][5]. Some effects of low power quality are high voltage peaks that can damage equipment, heating, losses, acoustic noise, and lifetime reduction in equipment. For utilities, low power quality is translated into additional losses on transmission lines and generators or the failure of power systems elements that can jeopardize the correct grid operation [6]. The abnormal grid operation can cause considerable economic losses to the operator and end-user. Therefore, power quality problems must not be neglected [7].

Low power quality is more pronounced in distribution systems, due to the high number of variable, nonlinear and unpredictable loads connected to them. As low voltage distribution grids are supplied by distribution transformers, these can be highly affected by the low power quality presented in these systems. When operating under these conditions, the transformer suffers higher core losses, which increase its hotspot temperature. This is a critical variable, as it relates to the winding isolation degradation and, therefore, the decrease in transformer lifetime [8].

Distribution transformers can be subject to different power quality problems in distribution grids when supplying nonlinear currents and nonlinear voltages [9][10]. Industrial applications, such as elevators, rolling mills, arc furnaces, among others, consume high amounts of current in shorts periods, worsening distribution grid operation. Power quality issues, such as flickering, can be generated due to the operation of industrial machinery [11]. Additionally, new kinds of loads establish new operating conditions for distribution transformers and the grid, for which they were not designed. For example, high penetration of wind and photovoltaic systems connected to the grid through power converters add a degree of uncertainty to the grid operation due to the high variability of these resources and also due to the harmonics injected by the power converters [12]. The distributed characteristic of these systems makes it possible that the voltage profile on the distribution grid can increase close to the connection points under high penetration periods [13]. This scenario can represent a problem for grid control systems, such as transformer tap changers, making them switch when it is not required [14]. On the other side, the widespread of electric vehicles can overload the grid. Electric vehicles fast-charging algorithms tend to delay the vehicle charging process to the night, due to economic incentives [15]. This scenario can overload the distribution transformers, reducing their lifetimes [16]. Several methods are proposed in order to reduce the impact on distribution transformers—for example, utilizing the power converter of distributed renewable energy resources for volt-var control, smart control system, intelligent and coordinated charging algorithms and including the distribution transformer hotspot model into the power converter control systems, the use of battery energy storage systems in order to operate in periods of high energy demand, among others [16][17][18].

The regulating capabilities provided by a distribution transformer are limited. To deal with slow dynamic voltage variations, they are provided with on-load taps commutating systems, which allow for modifying the winding ratio without disconnecting the load. Nonetheless, these systems operate in a discrete manner and with dynamics in the order of seconds. Additionally, they are the main transformer failure cause, which jeopardizes the distribution grid and adds additional maintenance costs. The use of electronic assisted taps commutating systems is available, allowing one to decrease the commutation times and losses. Nevertheless, they suffer additional conduction losses and operate in discrete voltage steps as well [19]. Distribution transformers do not have mechanisms to mitigate load current harmonics, it being necessary to design them to operate under these conditions. These transformers are known as k-rated transformers [20].

Solid-State Transformers (SSTs) are an attractive solution to cope with power quality problems, replacing conventional distribution transformers. They are based on power electronics, which allows for fast and precise voltage and current control [21]. Nonetheless, the efficiency of these systems is lower compared to other existing solutions, due to the necessity of operating with a high number of submodules, power conversion stages and the processing of the complete power flow. Compared to a distribution transformer, the complexity of an SST, the additional power electronics, and protection systems makes the SST a yet less reliable option [22]. In addition, SSTs are far more expensive compared to Low-Frequency Transformers (LFTs) of a similar power and voltage level. New power converter topologies, control systems, and redundancy are reducing this gap [23].

One of the main concerns with the applicability of new technologies in the grid is power system reliability. LFT can operate for several seconds under grid failures, such as short circuits. In contrast, power converters have a very limited short circuit current supplying capacity. Therefore, solutions based completely on semiconductors, such a SSTs, are not applicable to the actual power system yet [29]. On the other hand, some HDT configurations can operate under faults, as the HDT configuration allows for the power converter to be disconnected during the fault, letting the DT supply the short circuit currents, preserving the grid reliability [26]. We must be reminded that HDTs have attracted the attention of the industry, where ABB has filed several patents relating to their control, configurations and applications [30][31][32][33].

There are several methods to reduce the impact of inrush currents at the moment of the distribution transformer connection. For example, connecting the transformer phases in sequences at optimal moments. Nonetheless, it is possible to use the shunt stage of HDTs to mitigate their impact. In this scenario and based on Figure 2, using a prefluxing technique, in which the converter induces a magnetic flux equal to that induced by the grid at the connection instant, reducing the impact on the inrush currents generation. Once the transformer is connected to the grid, the power converter can be synchronized to the secondary side to initiate its normal operation, regulating the secondary side voltages and currents. When it is desired to disconnect the transformer, it is possible to use the same technique in the reverse order until the transformer flux is zero. This feature is proposed utilizing the configuration of Figure 2e along with a DC storage system connected to the DC-Link to provide the necessary energy to magnetize the transformer [34].

Alternatively, the same configuration can be applied to reduce magnetizing flux DC offsets, which generate inrush currents. The mitigation is carried out by the power converter module connected to the auxiliary winding, modifying the core flux [35].

By means of a parallel connection of an SST, such as configuration of Figure 2j, and by utilizing active and reactive power control, it is possible to increase the capacity of an LFT. This scenario is represented in Figure 3. The power control is designed to supply a desired load proportion, while being able to provide power quality problem mitigation services. This solution is carried out without a considerable volume or complexity increase. Proposed solutions integrate a full rated power converter in parallel to the conventional transformer [36][37][38].

Figure 3. Increase in an LFT capacity by means of a HDT.

In DC-Link configuration-based HDTs, it is possible to employ DC storage systems or distributed generation systems, which can be used to provide grid frequency support. This is highly attractive in low-mechanical inertia grids, where the use of HDTs can be exploited [39]. Additionally, if multiple units are employed in a power system, they can have an important effect even in stiff grids. Figure 4 shows the DC system integration to the HDT DC-Link to provide grid frequency support.

By means of an external control loop, it is possible to improve the grid inertia, which allows us to soften the frequency dynamic behavior under contingencies, providing primary frequency support. The control is based on modifying the converter injected power according to the grid frequency variation, emulating the synchronous generator mechanical equation [40][41].

Photovoltaic or wind generation systems can be integrated into the grid through conventional transformers. Their electromagnetic characteristic has a high impact on power quality, especially during low radiation and low wind speed periods. This operating scenario is translated into low injected active power by the renewable generating units and makes the magnetizing transformer currents considerable with respect to load currents. The generated harmonics by this phenomenon mainly depend on the winding connection type and the harmonic content presented on the grid voltage.

Figure 5a shows the presented scenario employing a HDT, which uses the configuration of Figure 2j. It allows for the attenuation of the renewable systems impact on the power electric system through an appropriate control system, which accounts for the transformer currents into the model. By doing this, the grid current on the medium voltage side is proportional to the current injected by the renewable generating units for all radiation and wind speed range. Additionally, it is possible to design the controllers to operate with unit power factor if the converter rated power allows it [42].

New kind of loads, such as electric vehicles, can produce additional stress on distribution transformers, for instance during multiple charging processes occurring at evening and night-time, specially at the domiciliary level [16]. The use of a HDT, such as exemplified in Figure 5b, can be beneficial for the HDT lifetime, as the power converter can be used to dampen the power consumption and also avoid LFT overloading.

2.5. Decentralized Control of a HDT for Voltage Regulation in Active Networks

Active distribution network can take advantage of HDTs in order to improve the voltage profiles. For example, the HDT configuration of Figure 2e can be utilized to provide voltage control to the low-voltage side by means of the series converter. On the other hand, the power converter connected to the auxiliary winding can absorb/inject a limited amount of reactive power which, in conjunction with other HDTs or smart devices, can provide voltage regulation to the medium-voltage buses.

Multiple HDTs, as shown in Figure 6, can be coordinated in order to regulate the voltage magnitude of the medium-voltage buses, while optimizing the reactive power injection/consumption of the HDTs. This task can be done in a decentralized manner, utilizing HDTs controlled with local variables, exclusively [43]. 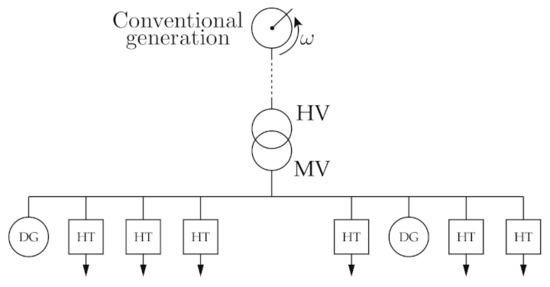 More
© Text is available under the terms and conditions of the Creative Commons Attribution (CC BY) license (http://creativecommons.org/licenses/by/4.0/)
Upload a video for this entry
Information
Subjects: Engineering, Electrical & Electronic
Contributor MDPI registered users' name will be linked to their SciProfiles pages. To register with us, please refer to https://encyclopedia.pub/register :
Marcelo A. Perez
View Times: 145
Revisions: 2 times (View History)
Update Time: 26 Jul 2021
Table of Contents
1000/1000
Hot Most Recent