Submitted Successfully!
Thank you for your contribution! You can also upload a video entry related to this topic through the link below:
https://encyclopedia.pub/user/video_add?id=12317
Check Note
2000/2000
Segmentectomy for Lung Cancer
Edit
Upload a video
This entry is adapted from 10.3390/cancers13133137

A lung segmentectomy, a type of sublobar resection, preserves more pulmonary function than is lobectomy. The use of minimally invasive lung segmentectomy for early-stage lung cancer has been increasing. This procedure is associated with technical challenges because (1) it requires a thorough understanding of the complex segmental anatomy that frequently accompanies anomalies, and (2) it is difficult to confirm the location of small tumors during minimally invasive surgery, which makes it difficult to obtain adequate surgical margins.

The basis of cancer treatment has been shifting from a “one-drug (treatment)-fits-all approach” to a “precision medicine” approach, which is a treatment tailored to individual patients. However, for thoracic surgeons, lobectomy has been the evidence-based standard surgical treatment for early-stage lung cancer since 1995 when a randomized control trial (LCSG 821) compared lobectomy and sublobar resection (including segmentectomy and wedge resection), demonstrating the former’s prognostic superiority [1]. Recently, the results of a large, multi-institutional, prospective randomized trial assessing the outcomes of segmentectomy and lobectomy (JCOG0802) were demonstrated (the 101st Annual Meeting of the American Association of Thoracic Surgery, 30 April–2 May 2021); the overall survival of patients who underwent segmentectomy was significantly superior to that of patients who underwent lobectomy, suggesting that segmentectomy is a potentially definitive, standard surgical approach in patients with small, early-stage lung cancers.

With the increased detection of early-stage lung cancer and the technical advancement of minimally invasive surgery (MIS) in the field of thoracic surgery, lung segmentectomy using MIS, including video- and robot-assisted thoracic surgery, has been widely adopted. However, lung segmentectomy can be technically challenging for thoracic surgeons due to (1) complex segmental and subsegmental anatomy with frequent anomalies and (2) difficulty in localizing deep, small, and impalpable tumors, leading to difficulty in obtaining adequate margins. To overcome these challenges, several studies have investigated lung segmental anatomy and preoperative simulation based on individual anatomy by three-dimensional (3D) CT [2][3][4][5][6][7], efforts to localize tumors intraoperatively [8][9][10] and identify the intersegmental plane [11][12].

In 2005, Okada et al. introduced their techniques for anatomical segmentectomy using “hybrid VATS,” which is defined as a minimally invasive approach under direct visualization with muscle-sparing mini-thoracotomy and video assistance [16]. The technical and oncological feasibility of this MIS approach for complex segmentectomy has been reported [14][17]. Several reports have demonstrated that complete VATS, which refers to a procedure that is performed primarily with a monitored view without direct visualization or rib spreading, and a recently emerged uniport VATS are technically feasible for complex segmentectomy [18][19][20]. However, their learning curves and generalizability remain unclear. Recently, the RATS approach has gained popularity in the field of general thoracic surgery, with several reported advantages over VATS, including ergonomic design, 3D-binocular vision, elimination of tremors, increased degree of motion, and enhanced manipulation. Such advantages are considered to enhance precise movement, surgeon view, and dexterity; and make MIS segmentectomy easier to adopt and perform [21][22][23].

3.Planning and Navigation for Segmentectomy

In decision-making during lung segmentectomy, thoracic surgeons should be confident of the following: (i) which branches should be divided or preserved; (ii) the appropriate sequential order for dividing segmental branches of the pulmonary artery, pulmonary vein, and bronchi; (iii) the margin distance can be obtained by a planned procedure; and (iv) the location of the intersegmental plane and tumor. These may be challenging for thoracic surgeons because of the wide variety of segmental/subsegmental branching patterns of the pulmonary vessels and bronchi with frequent anomalies. Therefore, preoperative planning and intraoperative navigation are useful in segmentectomy.

Three-dimensional computed tomography (3DCT)-based anatomical evaluation in individual patients is useful for preoperative planning and intraoperative navigation for segmentectomy. However, there remain some potential drawbacks, as follows: (a) this is a time-consuming process that requires technical skill in preparing detailed 3D images for surgeons; (b) difficulty in developing 3DCT from CT scans without contrast; and (c) difficulty in obtaining more realistic simulation images, such as an image showing stumps of segmental branches with divided intersegmental planes and preserved intersegmental veins. Recently, volume-rendering reconstruction software dedicated to lung segmentectomy was approved in Japan (REVORAS, Ziosoft, Inc., Tokyo, Japan) (Figure 1). The advantages and novelty of this segmentectomy planning by REVORAS are as follows: (i) an easy-to-use tool for surgeons; (ii) accepted use of non-contrast CT for “one-click 3D reconstruction”; (iii) separate segmentectomy planning based on the dividing bronchus or pulmonary artery, providing more reliable planning with an accurate resection margin according to the intraoperative identification technique of the intersegmental plane (ventilation-based identification fits for planning based on the bronchial stump, whereas perfusion-based identification fits for planning based on the arterial stump); and (iv) surgeon-oriented, intraoperatively useful 3D images with “key parts for segmentectomy,” including the bronchial and vascular stumps and intersegmental plane. 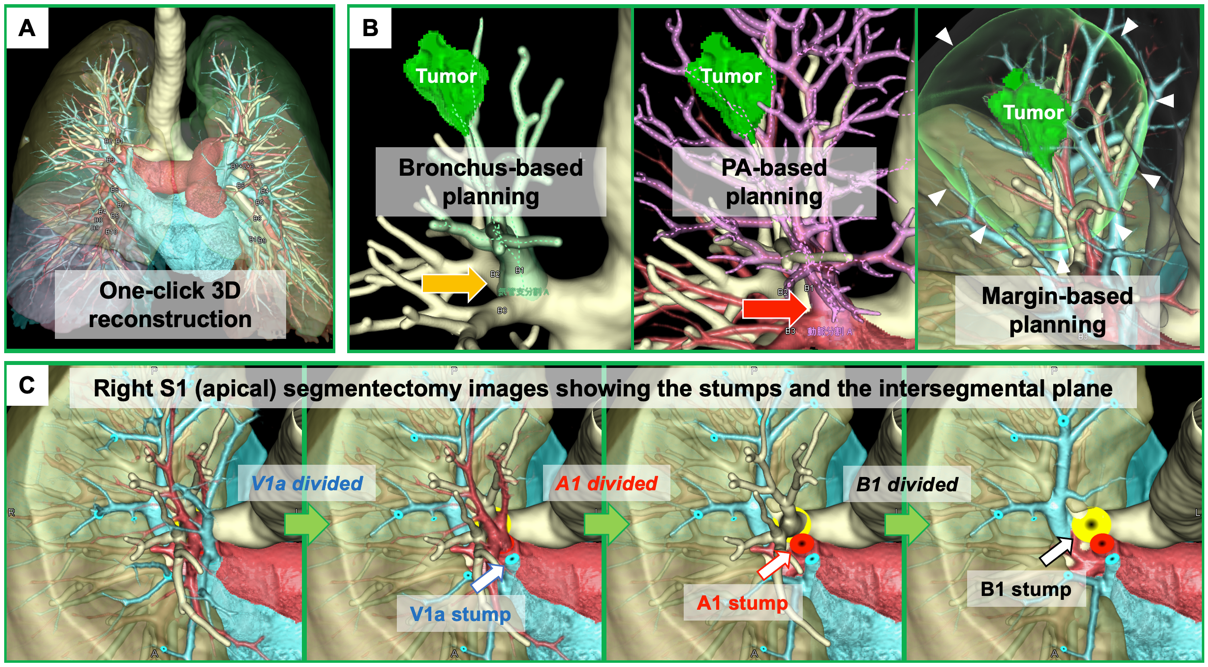 Radiofrequency identification (RFID) is a newly developed technique for tumor localization [10][24][25][26] has been approved for clinical use in Japan (SuReFInD, Hogy Medical Co., Ltd., Tokyo, Japan). In clinical practice, the RFID localization technique involves the following four steps: (1) bronchoscopic placement of the marker into the peripheral bronchus within or adjacent to the tumor using a virtual bronchoscopic navigation technique under fluoroscopic or CT guidance within two days before surgery; (2) CT scan to confirm the exact location of the marker and the 3D relationship between the marker and the tumor; (3) intraoperative identification of the marker using a handheld, sterile detection probe; and (4) real-time monitoring of the tumor location when dividing the lung (Figure 2). The advantages of this procedure include: (i) the marker can stay in place for at least 48 h, (ii) we can detect multiple markers separately with a unique identification in each marker, and (iii) the location of the marker can be easily confirmed even when dividing the lungs (real-time monitoring) [27][28]. 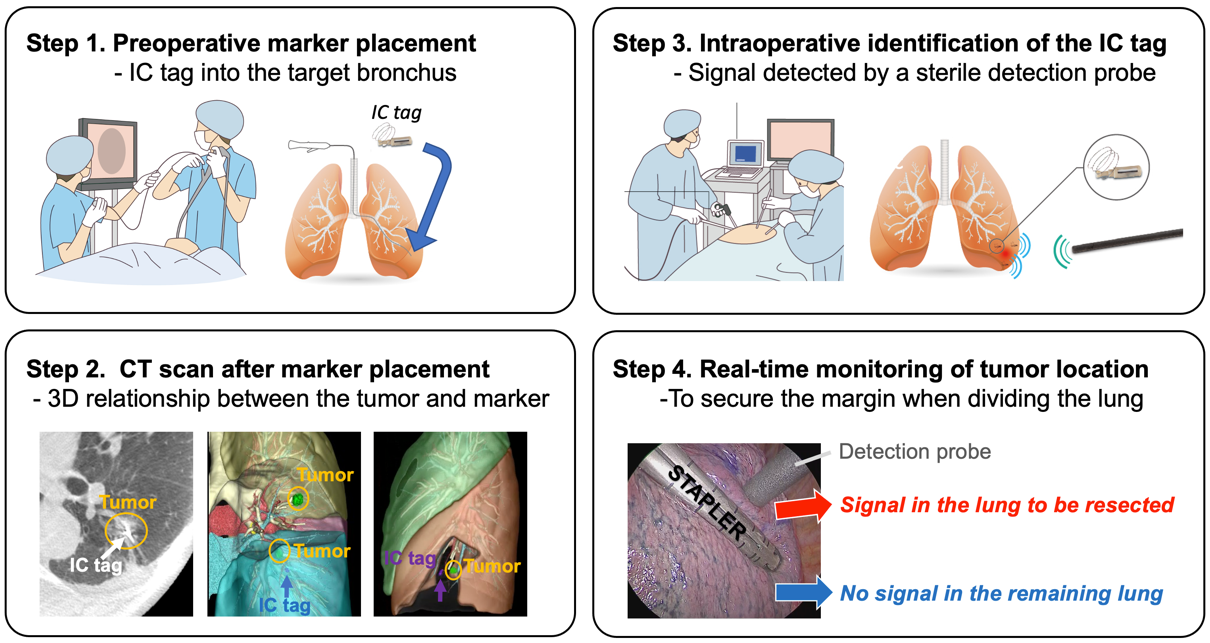 In Shinshu University, the criteria for lung segmentectomy for malignant diseases are shown in Figure 3. For all the patients who undergo segmentectomy, we create 3DCT images to perform segmentectomy planning. Based on the planning with expected volume loss and margin distance, we determine which segment(s) and/or subsegment(s) should be removed and which segmental/subsegmental branches should be divided or preserved. Then, we determine whether tumor localization is required for the planned segmentectomy with adequate margins. We visualize 3DCT images for segmentectomy planning for intraoperative navigation using two additional monitors next to the surgeons during surgery. 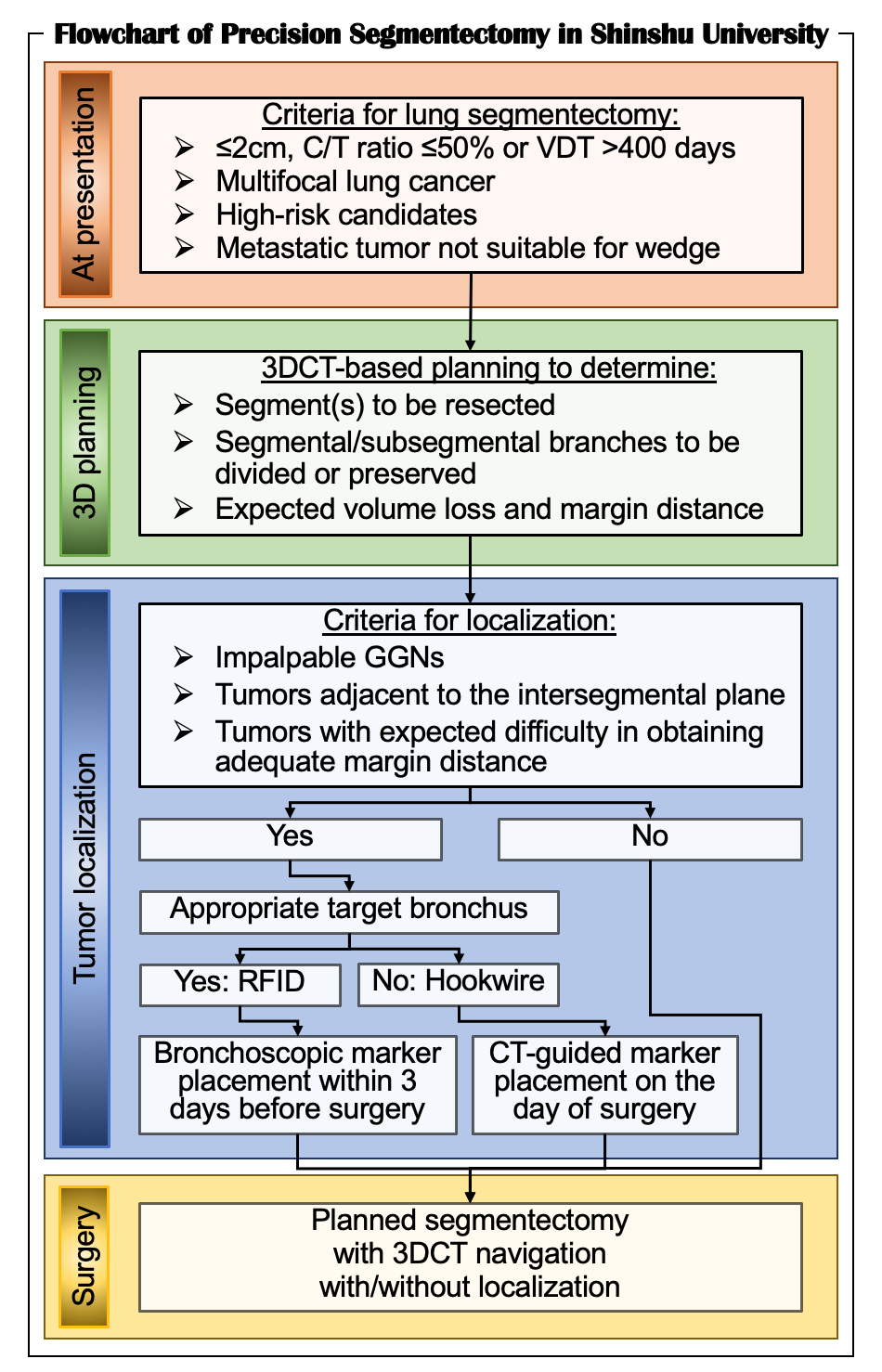 In this era of personalized cancer treatment, thoracic surgeons should be familiar with technical advances in MIS segmentectomy to provide safe and secure “precision segmentectomy” based on individual tumor location, lung function, and anatomy.

More
© Text is available under the terms and conditions of the Creative Commons Attribution (CC BY) license (http://creativecommons.org/licenses/by/4.0/)
Upload a video for this entry
Information
Subjects: Surgery ; Oncology
Contributor MDPI registered users' name will be linked to their SciProfiles pages. To register with us, please refer to https://encyclopedia.pub/register :
Takashi Eguchi
View Times: 81
Revision: 1 times (View History)
Update Time: 22 Jul 2021
Table of Contents
1000/1000
Hot Most Recent