Submitted Successfully!
Thank you for your contribution! You can also upload a video entry related to this topic through the link below:
https://encyclopedia.pub/user/video_add?id=12307
Check Note
2000/2000
Phlegm Syndrome
Edit
Upload a video
This entry is adapted from 10.3390/biom11020284

Phlegm is defined as a viscous and turbid pathological factor that is formed due to an imbalance in body fluid in traditional East Asian medicine (TEAM) and accumulates in certain parts of the body as the form of condensation.

The spleen is an important organ in the human body that plays a significant role in red blood cell clearance and immune response. However, in TEAM, the functions of this organ are not limited to immunity and blood cell clearance, as it is considered to play an important role in the digestive system. According to the theories of TEAM, the spleen produces Qi and blood from digested foods and governs the transportation of water in the body [1]. Qi refers both to the refined nutritive substance that flows within the human body as well as its functional activities, having both biochemical and physiological features. Therefore, in TEAM, the spleen is usually referred to as a digestive organ, similar to the stomach and the small or large intestine, and Spleen–Stomach Qi is involved in the digestive process [2]. A weakness in the spleen Qi can lead to the generation of damp, which is one of the predominant physiological factors in addition to phlegm. Damp can also be generated due to environmental conditions, such as humid weather. Phlegm is formed when the body’s fluid metabolism (related to spleen Qi) is disrupted or when damp is not eliminated properly or remains in a stagnant state in the body for an extended period (Figure 1). Liver Qi stagnation also contributes to Phlegm production [2]. Phlegm is defined as a viscous and turbid pathological factor that is formed due to an imbalance in body fluid concentration and accumulates in certain parts of the body after condensation [2][3]. Phlegm can be released by the body (external or secretory form) in the form of sputum and nasal secretions from the respiratory tract, or it may be produced internally and may not be released (internal form) [4]. In particular, while the internal form of Phlegm has not been identified in studies, there have been studies on its nature and its potential for causing several diseases. Conversely, in Western medicine, phlegm is defined as a secretion produced in the airways, lungs, and upper respiratory tract during disease and inflammation. Phlegm contains mucus along with viruses, bacteria, debris, and shedded inflammatory cells, and sputum is the expectorated form of phlegm [5]. 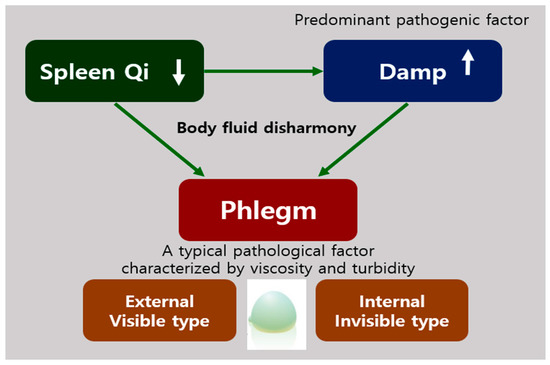 Figure 1. The etiology of phlegm in traditional East Asian medicine (TEAM). The weakness of Spleen Qi can lead to the generation of Damp, which causes body fluid disharmony occurring of Phlegm that are two types, external and internal types.

In TEAM, phlegm is considered to have a broader definition than that of sputum in Western medicine. Zhu Zhenheng, a traditional Chinese medicine (TCM) practitioner from the Yuan dynasty, stated that nine out of ten diseases were caused by Phlegm [4]. Additionally, strange afflictions have been attributed to Phlegm formation, since in its internal, nonsecretory form, Phlegm is considered to contribute to a variety of complex disorders [2]. Miscellaneous health problems may be attributed to Phlegm production, ranging from poor general health and digestive dysfunction to obesity, heart disease, cognitive impairment, autoimmune disorders, and tumors [2]. Based on the description of Phlegm in TEAM, its components do not seem to differ considerably from those of phlegm in Western medicine, as described above. In addition, Phlegm production is considered to be closely associated with inflammation in Western medicine [6]. Previous studies have shown that small molecules, including inflammatory factors and free radicals, might play a role in the interaction among Phlegm, stasis, and toxins [7]. Amyloids may be also considered to be related to Phlegm, since pathogenic amyloids are aggregated proteins that form fibrous deposits in plaques around cells and cause diseases such as amyloidosis, type 2 diabetes mellitus, and neurodegenerative disorders, including Parkinson’s disease, AD, and Huntington’s disease [8].

Nevertheless, since the above theory has not been validated, the precise composition of phlegm has to be determined in future research. The common symptoms of Phlegm syndrome are a muzzy feeling, heaviness in the head and body, palpitations, dizziness, fatigue, chest tightness, forgetfulness, irritability, bitter taste, dry mouth and throat, sticky mouth, general edema, swelling-induced pain in the head and eyes, and insomnia [4][9]. This description of the syndrome is specific to TEAM. The method used for describing a disease involves summarizing and studying the signs, symptoms, locations, causes, properties, and tendencies of the disease. In TEAM, a disease can be manifested as different syndromes in different patients; thus, identification of syndromes is a crucial part of the diagnostic process and treatment strategy in TEAM [10]. From a systems biology approach, in TEAM, a “syndrome” may be defined as the result of alterations in peptides or gene regulatory networks due to physiological dysfunction [11].

Phlegm syndrome is usually diagnosed by experienced physicians. In East Asian countries, including China, Korea, and Japan, pattern identification based on symptoms and signs is practiced as a unique diagnostic method in traditional medicine, which helps provide information for appropriate treatment [12]. This unique diagnostic system seems to have its roots in the philosophical difference between Western (conventional) and traditional (holistic) medicine, such as reductionism vs. holism. In the approach to pathogenesis adopted in TEAM, diseases are considered to affect the entire body rather than a specific part. The holistic approach adopted in traditional medicine has led to the development of individualized treatments for different patients with the same disease. This differs from modern personalized medicine; particularly, the method of evaluating a condition differs between both practices. Modern personalized medicine considers the genetic background and genotype of each individual, whereas individualized treatment in TEAM is conducted by observing the signs and symptoms exhibited by patients to define a phenotype that can guide treatment selection [12]. With respect to treatment, TEAM focuses on restoring physiological balance rather than curing a particular condition [13].

Since the 1980s, studies on the diagnostic criteria for syndromes, including Phlegm syndrome, based on TCM were initiated as part of projects on the scientific rediscovery and standardization of TCM. The process of distinguishing each syndrome involves the careful assessment of symptoms and signs using accepted criteria. The process is likely affected by the knowledge, clinical experience, academic background, and methods used by the physician, along with other factors [3]. Subsequently, the use of systems biology techniques allows thorough investigations based on a holistic approach. Using omics techniques, including genomics, transcriptomics, proteomics, and metabolomics, related studies have been actively conducted to identify biomarkers for the diagnosis of Phlegm syndrome in a standardized manner [14]. For instance, in a previous study on gene polymorphism analysis using the SNaPshot method, Han and Uyghur Chinese patients with hyperuricemia and Phlegm block were shown to harbor the rs2231137 allele C of the ABCG2 gene. In contrast, the rs2725220 allele G was associated with hyperuricemia in patients with nonPhlegm block [9]. In a Korean study on the relationship between gene polymorphisms and Phlegm syndrome, A-3826G and A-1766G polymorphisms in the UCP-1 gene known as obesity-related polymorphisms could be used as candidate genetic markers for the Phlegm-Dampness syndrome in stroke patients [15]. A self-reported Phlegm pattern questionnaire was developed using the Delphi method, reflecting the opinions of clinical experts in the context of TEAM. The questionnaire contained 25 items, each rated on a 7-point Likert scale, and could be administered as a validation study for healthy individuals [4]. Since this is a noninvasive and familiar approach, it can be easily applied in cross-sectional studies or descriptive surveys [16]. In addition to these methods for standardizing diagnosis, diagnostic systems based on images of the tongue [17][18] and tactile sensor systems for diagnosis based on pulse rate [19] have also been developed. However, despite the diverse efforts made, research on this subject is still at a preliminary stage, and reliable biomarkers for the accurate diagnosis of Phlegm syndrome are yet to be identified. The complexities involved in the interpretation of signs and symptoms in TEAM may lead to diagnostic errors [12]. Diagnostic technologies, diagnostic kits, or instruments such as endoscopy probes or computed tomography scanners that display visible or graphical test results should be utilized to convince patients of the severity of Phlegm syndrome and to perform accurate diagnosis.

There are multiple aspects to be considered before Phlegm syndrome can be diagnosed using scientific and standardized methods. These include identification of the components of invisible Phlegm, development of diagnostic equipment for Phlegm syndrome, and standardization of English terms.