Submitted Successfully!
Thank you for your contribution! You can also upload a video entry related to this topic through the link below:
https://encyclopedia.pub/user/video_add?id=12281
Check Note
2000/2000
Electron beam modification (EBM)
Edit
Upload a video
This entry is adapted from 10.3390/ijms22126369

The surface characteristics of the implant material predetermine how the biomolecules absorb to the surface [1]. The adhesion proteins such as extracellular matrix proteins, cell membrane proteins, and cytoskeleton proteins influence bone tissue cells’ morphology, proliferation, and differentiation. The topography, chemistry, and surface energy also determine cell behavior in contact. The micro-textured implants demonstrate improved osseointegration (direct apposition of bone tissue to the implant) instead of smooth implants by in vivo test [2]. Therefore, the organization of surface roughness is an important parameter for the contact guidance phenomenon. The micron-roughened surface morphology can increase the surface area of the implant and the contact between the implant and host bone. In addition, it was demonstrated that osteoblast cells can detect and respond to different nano-topographical features in vitro [3]. When nanoscale architecture is combined with underlying rough microstructure, significant improvement in both implant fixation strength and matrix mineralization can be observed [4].
Among metallic implant materials, titanium and its alloys are considered to be the best choice for bone implant applications because of their low modulus of elasticity, corrosion resistance, and biocompatibility [4]. Unfortunately, Ti6Al4V alloy, which is most widely used, has low wear resistance and the debris generated during wear accelerates electrochemical reactions between the physiological environment and implant surface [5]. Moreover, the alloy loses biocompatibility if V and Al ions are released in human tissue, because Al can cause neurological diseases while V ions are cytotoxic [6]. Therefore, further developments that extend the longevity and bioactivity of these implant materials are needed.
For improving osteoconductivity and osteoinductivity of titanium implants, bioceramic coatings such as nanoclays [7], hydroxyapatite [8], and calcium silicate [9] have been utilized. However, these coatings demonstrate insufficient strength and fracture toughness for load-bearing applications in implantology [10]. TiN coatings applied to orthopedic alloys are well-known materials that positively affect the tribological properties of bone grafts by reducing the coefficient of friction [11], wear [12] and increasing hardness and scratch resistance [13]. Such tribological performance of a coating will help to enhance the service life of articulating implants if at high contact pressure the elastic recovery of the hard coating and soft alloy does not differ substantially. TiN-coated Ti6Al4V alloy also demonstrated biocompatibility [14] and reduction of ion release rate [15] compared to uncoated alloy. Nonetheless, studies of cell proliferation and differentiation on TiN-coated materials are contradictory: several papers report no difference in proliferation compared to controls [16][17], while other studies demonstrate an increase in proliferation [18]. Moreover, concerns were raised about PVD-coated Ti6Al4V with TiN because it suffered from coating failure due to either defects in the film [19] or higher difference in elastic modulus of Ti6Al4V substrate and TiN film [14].
On the one hand: this condition could be improved by applying suitable initial surface modification such as electron beam treatment to increase surface roughness and raise surface hardness values and, hence—elastic modulus of Ti6Al4V alloy before TiN deposition. That will reduce the risk of delamination due to the gradient-like hardness profile of the substrate. A feasible method for producing micro- and sub-micrometer surface texturing on metallic materials is the direct laser interference patterning (DLIP) that directly removes material by ablation [20]. However, when utilizing double-pulse generation 50% of laser energy is lost while treating metal surfaces [21] which makes the depth of the substrate strengthening lower. According to some authors [22], the formation of preferred crystallographic orientation that influences mechanical properties can explain the differences in the hardening mechanism of laser- and electron-beam processed metal surfaces. EBM can be carried out in different geometries of scanning (linear, circular, etc.) because charged electrons can be deflected and precisely guided [23]. This modification leads to direct structuring of the surface by periodical topography in a high vacuum state. Thus, low pressure prevents oxidation of easily oxidized titanium alloys and hinders the formation of brittle surface layer (the so-called alfa case) that affects negatively the mechanical properties and fatigue resistance of the alloy [24].
On the other hand, to increase bone formation and bonding strength, deposition of TiO2 coating on TiN film’s surface is a promising approach that could further improve the corrosion resistance of the coating [25], covering the nitride defects. TiO2 coatings are well-suited as protective non-toxic hydrophilic coatings in medical applications in which additional benefits like self-cleaning and anti-bacterial effects can be obtained [26]. It was also shown that anatase and mixtures of anatase-rutile crystallographic forms of TiO2 exhibited more efficient apatite formation than amorphous structures [27]. Additionally, nanostructured TiO2 exhibited higher bone growth values and bone-to-implant contact area [28]. Since the biological response is affected by the chemistry and topography of the implant material, the osteoblastic response of the cells to deposited TiO2 on the surface of TiN film is a highly interesting field of research.
A number of different techniques have been used for producing ceramic TiN and TiO2 films such as magnetron sputtering [29], high power impulse magnetron sputtering (HIPIMS) [30], CVD [31], ion beam-enhanced deposition [32], electron-beam deposition [33], low pressure plasma spray [34], dual plasma deposition [35], laser deposition [36], plasma ion nitriding [37], plasma immersion ion implantation [38], cathodic arc deposition [39][40][41]. The low process temperature allows the coating material to be deposited without reduction in hardness, corrosion resistance or distortion compared to techniques conducted at higher temperatures [42]. Except for low-temperature deposition, cathodic arc deposition offers an effective source of ionized, energetic material to produce well adherent and dense coatings at high deposition rates [43]. However, this technique has not been fully exploited for the production of biocompatible coatings on Ti6Al4V substrates. In our previous studies, TiN/TiO2 coatings were found to improve the hydrophilicity and anti-corrosion properties in Ringer solution of titanium alloy with lower aluminium content (Ti5Al4V) [44][45]. At the same time, we demonstrated that TiN/TiO2 coatings deposited on polished Ti6Al4V promoted cell adhesion without inhibiting cell viability [46].

The supportive effect of TiN/TiO2 coatings on cell adhesion and viability was demonstrated when the polished AR sample was compared to the polished and EBM-coated samples. Compared to the uncoated group, TiN/TiO2-coated samples’ cell attachment efficiency was better (Figure 1A). It is known that nano- and submicron-structured crystalline particles have higher surface charge densities than bulk materials [47]. Therefore, the small crystalline TiO2 has a higher negative surface charge that is expected to show a high affinity to some positively/negatively charged cell-adhesion mediated molecules. Considering different extracellular matrix (ECM) proteins, Price et al. stated that due to its relatively linear and small molecule, vitronectin recognized by osteoblasts is preferentially adsorbed to nano-crystalline surfaces [48]. Moreover, cell attachment is affected by the surface roughness of samples. As opposed to AR and AR500 samples, AR850 specimens before and after coating deposition demonstrated higher attachment efficiency. Therefore, the surface’s organization in isotropic roughness with a higher distance between the grooves (above 42 μm), lower peak-to-valley (Rz) values and predominate valley areas influence the attachment response of MG63 cells. It follows that cell adhesion can be governed by well-defined roughness features comparative to osteoblast cell size (approximately 20 μm [49]). That fact can be explained by the flexible and elastic external cell membrane that is prone to accommodate small features and/or complex surface topographies [50]. That initial accommodation can be better achieved on a less rough surface such as that on AR850 rather than on AR or AR500 irrespective of the presence/absence of the coating. Moreover, the change in surface energy related to coating structuring and phase composition was found to be able to modulate protein adsorption which further regulates cell adhesion and spreading [51].

Figure 1. Cell attachment after 1 h (A) and cell viability evaluated by MTT assay (B) of MG63 growing on uncoated and coated samples for 24 h. * p < 0.01 compared to the AR sample, n = 2.
The deposition of TiN/TiO2 coating also promoted cell viability during the initial 24 h compared to uncoated Ti5Al4V substrates (Figure 1B). However, cell viability on AR850-coated and the uncoated alloy was found to be lower than that on AR500 samples. It was claimed that micro- and nanometer peaks and valleys on implant surfaces were found to affect the cytoskeleton organization and intracellular transduction signaling pathways [52]. Moreover, the decreased viability on the coated AR850 sample could be associated with the presence of a greater fraction of anatase in the oxide since it was found that dissolution of Ti ions from the rutile phase was one order of magnitude lower than that of anatase [35].
The cell morphology of MG63 osteoblasts on each bare and coated surface was investigated by fluorescent microscopy following a cytoskeleton formation. Representative results are shown in Figure 2. The cells of the mechanically polished surface exhibited a flat phenotype typical for osteoblasts cultured on such surfaces [49], forming a monolayer. The cells attached to the coatings displayed polygonal elongated morphology extending from the main body filopodia and lamellipodia suggesting more differentiated physiology and direct focal contacts with the coating. A certain amount of filopodia was found for cells cultured on bare substrates but not as many as identified on the coated samples’ surface. Further, MG63 cell morphology was not abnormal when seeded on TiN/TiO2 coatings, suggesting that the nanostructured coatings were non-cytotoxic. After 24 h, cells on coated specimens exhibited long extensions of cytoplasmic membranes, making the cells fully spreading out the shape. 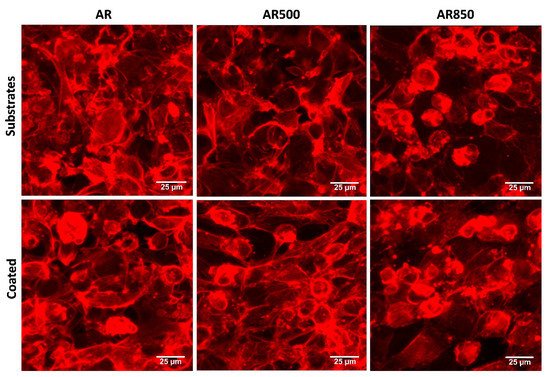 Figure 2. Representative fluorescent images showing cell morphology of MG63 cultured on bare and coated substrates for 24 h. The cytoskeleton was visualized by F-actin staining. Bars 25 µm.
The depth and width of grooves can determine the focal contacts of osteoblasts and the way they mineralize their matrix. For that reason, after 31 days of osteogenic induction, differentiation-induced calcium nodules on the surface of all samples were stained and measured by a quantitative colorimetric assay. The bone mineralization activity was found to be higher on the coated samples than on uncoated ones (Figure 3). 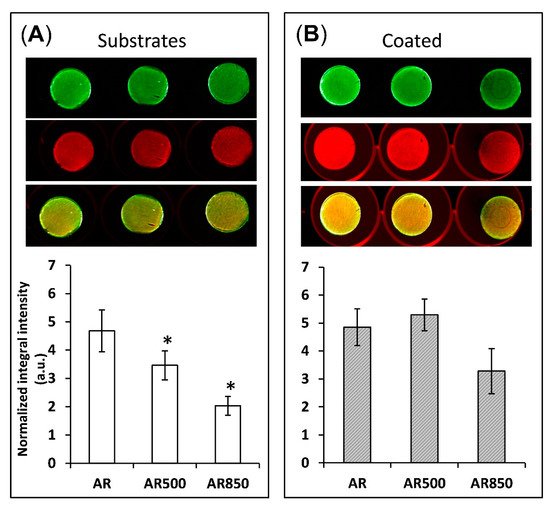 Figure 3. Bone mineralization activity of (A) uncoated and (B) coated samples after 31 days post-seeding of MG63 cells. * p < 0.01 compared to the AR sample. Mineralization was visualized by BoneTag CW800 (green) and cells by CellTag700 (red). * p < 0.05 compare to AR, n = 3.
On the surface of EBM substrates (Figure 3A), osteoblasts tend to form congregates of calcium nodules in the cavities following the trajectory of the grooves. Similar behaviour of suppressed cell spreading on microroughened surfaces was also observed by Aita et al. [53]. However, even on the mechanically polished samples, calcium nodules were not homogeneously distributed on the surface (Figure 3A). In contrast, all coated samples displayed a more homogenous distribution of nodules on their surfaces. This fact indicates that the cells cultured on coated samples form focal attachments that allow them to spread across structures and build a homogenously mineralized matrix, especially on the coated AR500 samples. It follows that the coating boosted and enhanced cell differentiation. These favourable results can be explained by the relatively large material surface area available for cell adhesion, proliferation, differentiation and a change in spatial cell arrangement and protein adsorption. The present study indicates that the proposed hybrid treatment has a notable effect on biofilm formation like other surface modifying approaches referred to in [54]. It is generally considered that rapid bone mineral deposition on the surface of the implant results in earlier stabilization of the alloplastic material [55]. However, the changes that osteoblast cells undergo are complex and not easy to explain simply as a function of surface micro- and nanoarchitecture. For that reason, a limitation of our study is that we do not examine the profiles of gene expression and enzyme activity that control osteoclast differentiation as well as the relative rates of proliferation on each surface. Another limitation is that the influence of different rutile-to-anatase ratios in TiO2 should be clarified separately by samples with fixed weight percentages of both phases in the coatings. However, because of the naturally occurring processes that were earlier discussed, we consider coatings with changing rutile-to-anatase ratio while taking it into account in the present paper. Solving these two issues will be a task for our future studies.