Submitted Successfully!
Thank you for your contribution! You can also upload a video entry related to this topic through the link below:
https://encyclopedia.pub/user/video_add?id=12273
Check Note
2000/2000
Polyphosphorhydrazone-Based Radical Dendrimers
Edit
Upload a video
This entry is adapted from 10.3390/molecules26051230

The search for new biomedical applications of dendrimers has promoted the synthesis of new radical-based molecules. In particular, obtaining radical dendrimers (dendrimers functionalized with organic radicals) has opened the door to their use in various fields such as magnetic resonance imaging (MRI), as antitumor or antioxidant agents, or the possibility of developing new types of devices based on the paramagnetic properties of organic radicals.

The search for new biomedical applications of dendrimers has promoted the synthesis of new radical-based molecules. Specifically, obtaining radical dendrimers (dendrimers functionalized with organic radicals) has opened the door to their use in various fields such as magnetic resonance imaging (MRI), as anti-tumor or antioxidant agents, or the possibility of developing new types of devices based on the paramagnetic properties of organic radicals. In particular, in MRI applications, paramagnetic gadolinium-based contrast agents (CAs) are widely used because, thanks to their seven unpaired electrons (spin 7/2), they shorten T1 relaxation time and lead to high signal enhancement [1][2][3][4][5]. Gadolinium dendrimeric systems have been used with success: for example, the covalent attachment of Gd(III) complexes to poly(amido amine) (PAMAM) dendrimers to generate unique macromolecular contrast agents for MRI has been reported by several research groups [6]. Although gadolinium-based contrast agents have historically been considered as safe, a linear relationship between their administration and the development of nephrogenic systemic fibrosis has been recognized in patients with renal impairment [7][8]. In addition to this, the accumulation of toxic Gd(III) ions in the brain, kidneys, liver, bones, or skin of patients with normal renal function has recently been demonstrated [9]. For this reason, it is crucial to find alternative imaging probes with the same or better paramagnetic properties than current Gd-based CAs.

More than 20 years ago, Janssen and Meijer [10] and Kashiwagi [11] functionalized dendrimers with organic radicals to study their electron paramagnetic resonance (EPR) or voltammetric behavior. Since then, only a few papers based mainly on poly(amido amine) (PAMAM) and poly(propylene imine) (PPI) dendrimers functionalized with organic radicals have been reported, with the majority of them devoted to the study of their magnetic or structural properties, relaxivity, or other related properties [12][13][14][15][16]. It is only a few years ago when, with a view to their application as contrast agents for MRI, they began to be studied in the scientific community [17][18][19][20][21][22][23][24]. Poly(propylenene imine), polyphosphorhydrazone (PPH), and oligoethylene glycol (OEG) based-dendrimers or dendrimer-like structures were functionalized with organic radicals, trying to replace the gadolinium III complexes currently used for this purpose. In fact, the first time the term “radical dendrimers” was used was in one of our first publications, specifically in the article published in Macromolecules in 2014, in which the synthesis and characterization of a family of polyphosphorhydrazone-based dendrimers fully functionalized with organic radicals was described for the first time [19].

Focusing on polyphosphorhydrazone dendrimers, the synthesis of radical dendrimers based on PPH can only be understood thanks to the impressive work carried out by the group of Jean-Pierre Majoral and Anne-Marie Caminade using these phosphorous dendrimers [27][28][29][30][31][32].

The first articles published of this kind of dendrimer with radicals were based only on a cyclotriphosphazene ring as a scaffold for the radicals in order to study its magnetic, electrochemical, and structural properties, the interaction between radicals at the dendrimer surface, as well as the obtaining of chiral multi-spin systems [18][33][34][35][36][37][38]. For example, it was possible to provide, for the first time, experimental data about the molecular structure in solution, by EPR, of the cyclotriphosphazene ring functionalized with TEMPO radicals in its six branches, demonstrating they have the same relative orientation as in the solid state determined by X-ray diffraction: three branches above the cyclotriphosphazene ring and the other three below it (Figure 1) [18]. With a view to examining the possibility of building chiral multi-spin systems on the cyclotriphosphazene scaffold, Tamura and co-workers prepared chiral nitroxide–cyclotriphosphazene hybrid compounds, and they evaluated the magnitude of the intramolecular spin–exchange interactions by EPR, and their magnetic properties in the solid state by magnetic susceptibility measurements and X-ray crystallographic analysis [33][34].

Figure 1. EPR spectrum at 350 K and the corresponding X-ray diffraction structure of cyclotriphosphazene functionalized with six TEMPO radicals. Published by Org. Lett. in 2013 [18].

The first family of polyphosphorhydrazone dendrimers functionalized with organic radicals was published in 2014, as mentioned above. Vidal-Gancedo and co-workers obtained a five-generation family of PPH-based radical dendrimers with TEMPO as the radical end groups (Scheme 1) [19]. A comprehensive characterization was carried out by EPR, SQUID, 1H-NMR, 31P-NMR, FT-IR, and UV-Vis spectroscopy. The nitroxyl radicals at the periphery exhibited a strong intramolecular spin–exchange interaction among them, which depended on the dendrimer generation and the temperature. At higher generation and temperature, the intramolecular spin–exchange interaction among radicals was much stronger. The dynamic behavior with temperature of such an interaction was also carefully studied by EPR. In addition, the magnetic properties studied by SQUID magnetometry showed weak anti-ferromagnetic interaction between the spin carriers. 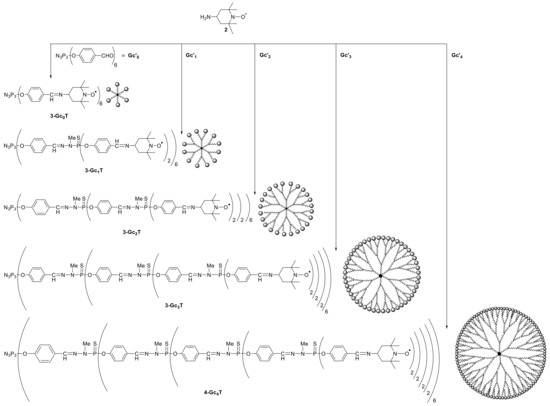 Having solved the challenge of obtaining PPH radical dendrimers, it is essential to solve one of the main problems that dendrimeric systems present, especially in middle and high generations: their solubility in water, if we are thinking about biomedical applications. The water solubility of dendrimers or similar compounds is sometimes overcome by PEGylation or by including free polar end groups, among other techniques [17][22][39][40]. However, in this way, not all of the anchoring positions at the end of the branches are available for radical anchoring, and hence the molecular relaxivity should be lower than with a fully nitroxide covered surface. In our group, we proposed an innovative procedure to increase the water solubility and, at the same time, to maintain the entire number of terminal functional groups to be functionalized with radicals. It consists of the use of an amino acid, in this case tyrosine (Tyr), as a linker between the PPH branches and the radicals, in this case PROXYL radicals (Gn-Tyr-PROXYL dendrimers, Figure 2) [21]. The amino acid is coupled to the dendrimer’s branches, providing an available amino group for radical coupling and a methyl ester group to provide negative charges via hydrolysis, which confer high solubility at physiological pH and low toxicity for intravenous administration. In this way, we obtained a series of radical dendrimers fully soluble in water with up to 48 PROXYL radicals in the periphery that provided very high relaxivities.

The fully water-soluble PPH based Gn-Tyr-PROXYL radical dendrimers obtained offered to the pendant radicals much higher stability against reduction compared with the free PROXYL radical, as shown by an EPR chemical reduction study with ascorbic acid. The high number of paramagnetic nitroxide units in the dendrimer’s periphery resulted in high molecular relaxivities (Figure 3): while G1-Tyr-PROXYL dendrimer presented a similar relaxivity (2.9 mM−1s−1) than the most widely used Gd-based CA in clinics, Magnevist (Gd-DTPA, 3.2 mM−1s−1 r.t. 7T), one molecule of G3-Tyr-PROXYL radical dendrimer presented a relaxivity of ca. 13 mM−1s−1 that means a remarkably 4 times higher value than Gd-DTPA. Similar results were obtained in the ex-vivo MRI studies in mice, obtaining very good relative contrast enhancement after the local injection of G3-Tyr-PROXYL radical dendrimer compared with Gd-DTPA. Moreover, the four radical dendrimers’ generations showed very low cytotoxicity. These studies all demonstrated that such radical dendrimers are excellent candidates to be used as MRI contrast agents suited for biomedical applications. Furthermore, the control over the structure of these dendrimers, opens the window of opportunity for a future modulation of their biodistribution profiles. 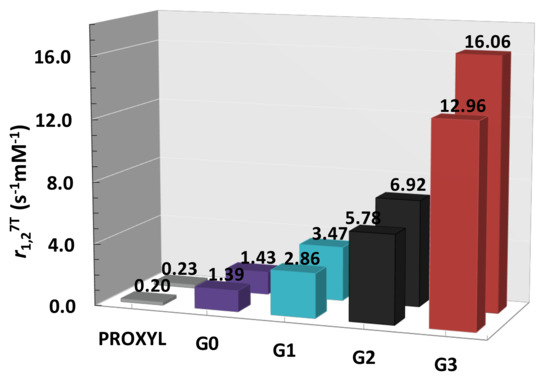 There are several examples that allow us to see the versatility of this approach: one of them is the improvement of the solubility in water explained in the previous example, using amino acids as linkers [21].

Another example, is the possibility to tune the intramolecular spin–exchange interaction between radicals, as well as their physical–chemical properties, by using different linkers. Two generations of PPH-based radical dendrimers were synthesized with two different linkers, imino and acrylamido ones (Figure 4) [41]. In this paper, a drastic change in the way that the radicals interacted among one another was observed by EPR and CV studies. While the radicals in Gn-imino-TEMPO dendrimers presented a strong intramolecular spin–exchange interaction, in the Gn-acrylamido-TEMPO ones, they acted mainly as independent radicals. In addition, the choice of the linker can lead to a radical dendrimer with different physical–chemical properties, even though the dendritic structure is the same—for instance, showing completely different polarity (in this case, much higher with the acrylamido linker than with the imino one). The control over the interactions between radicals opens the perspective to tune them as needed in many applications, such as dynamic nuclear polarization (DNP), MRI, organic electronics, or organic batteries. 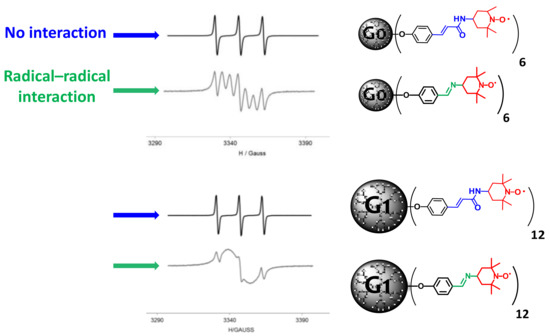 Figure 4. EPR spectra of PPH Gn-acrylamido-TEMPO and Gn-imino-TEMPO radical dendrimers, showing the different intramolecular spin–exchange interaction among radicals, depending on the linker used. Published by ChemPhysChem in 2018 [41].

Finally, if we change the type of radical—for instance, using perchlorotriphenylmethyl (PTM) radicals—we can take advantage of their redox properties, for example in the design of different devices such as molecular switches [42]. Three generations of polyphosphorhydrazone dendrimers, fully functionalized with 6, 12, and 24 PTM radicals in the periphery, were capable of undergoing electrochemical reversible switching by multi-electron reduction and oxidation. An electrical input was used to trigger the physical properties of these radical dendrimers in a reversible way, modifying their optical, magnetic, and electronic properties (Figure 5).

Figure 5. Representation of the electrochemical bistability of PTM radical dendrimers (PPH Gn(PTM•)x, n = 0–2, x = 6–24). The PTM molecule has two redox states, the radical (left) and anion (right) forms, which can be electrochemically interconverted. Each state exhibits different magnetic and optical properties: radical dendrimers Gn(PTM•)x exhibit spin S = x·½, an absorbance band at 386 nm, and red fluorescence emission, and anion Gn(PTM−)x is a diamagnetic species with S = 0, a maximum absorbance band at ca. 520 nm, and is not fluorescent. Published by Chem. Mater. In 2019 [42].

More
© Text is available under the terms and conditions of the Creative Commons Attribution (CC BY) license (http://creativecommons.org/licenses/by/4.0/)
Upload a video for this entry
Information
Subjects: Materials Science, Biomaterials
Contributor MDPI registered users' name will be linked to their SciProfiles pages. To register with us, please refer to https://encyclopedia.pub/register :
José Vidal-Gancedo
View Times: 52
Revisions: 2 times (View History)
Update Time: 22 Jul 2021
Table of Contents
1000/1000
Hot Most Recent