Submitted Successfully!
Thank you for your contribution! You can also upload a video entry related to this topic through the link below:
https://encyclopedia.pub/user/video_add?id=12272
Check Note
2000/2000
Cloned Goats
Edit
Upload a video
This entry is adapted from 10.3390/ijms22147490

The Cloned Goats or Transgenic Cloned Goats are generated and/or multiplied by one the most advanced and widely applied assisted reproductive technologies (ARTs) designated as somatic cell cloning or somatic cell nuclear transfer (SCNT). The SCNT-derived goats can provide a valuable tool for a variety of transgenic, biomedical, biopharmaceutical and nutri-biotechnological research.

One of the most rapidly developing strategies for reproductive biotechnology in mammals, including farm livestock species, is cloning by somatic cell nuclear transfer (SCNT) (Figure 1). 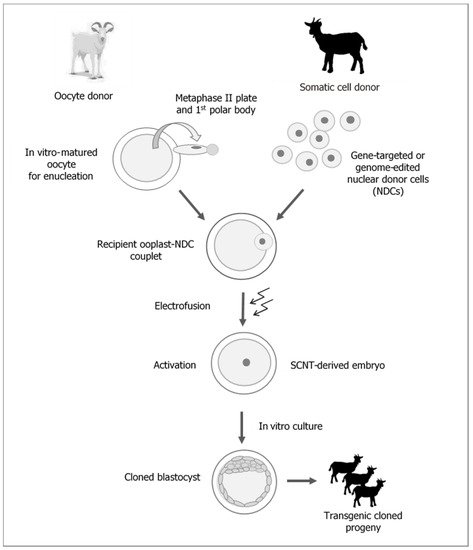 Figure 1. Generation of transgenic cloned goats by somatic cell nuclear transfer (SCNT).
It is beyond any doubt that the attractiveness of cloning techniques results from their potential to generate and multiply transgenic animals, which are valuable due to the expression of modified genes (Figure 1). Furthermore, this attractiveness also depends, to a lesser degree, on the possibility to replicate individuals with excellent, highly heritable breeding (genetic) and performance traits, which may shorten the generation interval and increase the rate of breeding progress. However, the aforementioned areas of research are being explored on a limited scale due to the high costs associated with the cloning procedure resulting from the low efficiency of the method. It is beyond any doubt that the widespread use of cloning methods will be possible once efficacy and repeatable results are guaranteed [1][2][3][4].
The main reason for low pre- and postimplantation developmental potential and poor quality of SCNT-derived embryos is the abnormal adaptation of the transferred somatic cell nuclei to the biochemical conditions of the oocyte cytoplasmic microenvironment, i.e., their incomplete or improper remodeling and reprogramming in the cytoplasm of nuclear-transferred oocytes. The latter also gives rise to the relatively high incidence of congenital malformations (anatomo-, histo-, and physiopathological changes) in cloned fetuses and offspring. This calls for studies aimed at the precise determination of the conditions that facilitate epigenetic reprogramming in the nuclear donor cell genome during the pre- and postimplantation development of SCNT-generated embryos and fetuses of different mammalian species, including the domestic goat [5][6][7][8][9][10]. Promising results were achieved by investigations that focused on the use of extrinsic nonselective agents for stimulating the epigenetically regulated transcriptional activity of genomic DNA in both nuclear donor somatic cells and SCNT-cloned embryos [11][12][13][14][15].

Although the efficiency of somatic cell cloning in goats remains relatively low, further studies are necessary because modern ART has important implications in the fields of goat breeding, the transgenics of this mammalian species, agri-food biotechnology, biomedicine, and biopharmacy.
An increase in the efficiency of somatic cell cloning techniques in the domestic goat can be brought about by further intensive research into improving both developmental competence and the parameters related to the molecular and epigenetic quality of SCNT-derived embryos. The latter can be achieved by efforts aimed at using nonselective or selective inhibitors of DNMTs and HDACs, which would in turn lead to enhancements in the reprogrammability of the epigenetic memory profile within genomic DNA of NDCs, nuclear-transferred oocytes, and the corresponding caprine cloned embryos. This is a sine qua non condition for the practical use of SCNT-based cloning, and thus for the production of genetically transformed goats for the purposes of human nutrition technology based on a meat diet.

More
© Text is available under the terms and conditions of the Creative Commons Attribution (CC BY) license (http://creativecommons.org/licenses/by/4.0/)
Upload a video for this entry
Information
Subjects: Genetics & Heredity
Contributor MDPI registered users' name will be linked to their SciProfiles pages. To register with us, please refer to https://encyclopedia.pub/register :
Marcin Samiec
View Times: 39
Revision: 1 times (View History)
Update Time: 21 Jul 2021
Table of Contents
1000/1000
Hot Most Recent