Submitted Successfully!
Thank you for your contribution! You can also upload a video entry related to this topic through the link below:
https://encyclopedia.pub/user/video_add?id=12271
Check Note
2000/2000
Arcuate Neurocircuits
Edit
Upload a video
This entry is adapted from 10.3390/ijms22137050

Obesity is a chronic state of energy imbalance that represents a major public health problem and greatly increases the risk for developing hypertension, hyperglycemia, and a multitude of related pathologies that encompass the metabolic syndrome. The underlying mechanisms and optimal treatment strategies for obesity, however, are still not fully understood. A growing area of research is to better understand how peripheral hormones interact with a widely distributed network of brain circuits involved in the control of energy balance. In this regard, the arcuate nucleus of the hypothalamus has emerged as an important brain region due to its ability to sense circulating hormones and to modulate neural pathways controlling food intake and energy expenditure, and blood pressure.

Obesity is a major public health problem, with 39.8% of the United States population considered obese in 2016 [1]. Importantly, obesity greatly increases the risk for developing hypertension, hyperglycemia, and a multitude of related pathologies that encompass the metabolic syndrome [2]. In fact, the American Heart Association has cited obesity as one the biggest current challenges in improving cardiovascular health [3]. At the most fundamental level, obesity occurs when caloric intake exceeds energy expenditure to promote excess energy storage in white adipose tissue [2]. While the restoration of energy balance is expected to prevent or slow the onset of obesity, the underlying mechanisms and optimal strategies to achieve this remain poorly understood. As evidence of this, lifestyle modifications only produce modest effects on long-term weight loss [4]. Furthermore, several anti-obesity drugs, which target central pathways involved in the regulation of appetite or energy expenditure, have been withdrawn from the market due to limited efficacy and adverse cardiovascular and other off-target effects [5][6]. These findings illustrate the critical need to identify new pharmacological targets that can be utilized to promote positive metabolic changes for the treatment of obesity without adversely impacting cardiovascular control.
The control of energy balance involves complex and integrated interactions between behavioral and physiological factors. In terms of physiological factors, a growing area of research is to better understand how peripheral hormones interact with a widely distributed network of brain circuits involved in the control of energy balance [7][8], with the ultimate goal of developing new approaches that target specific neuronal pathways to induce positive metabolic effects without eliciting adverse cardiovascular effects. In this regard, the arcuate nucleus of the hypothalamus (ARC) has emerged as an important brain region due to its ability to sense circulating hormones and to modulate neural pathways controlling food intake, energy expenditure, and blood pressure [9][10].

The hypothalamus is a key brain region that integrates peripheral information about the nutritional status of the body and can emit an endocrine response to regulate food intake or an autonomic nervous system response to regulate energy expenditure [9]. In particular, the ARC has emerged as an important contributor to energy balance and is adjacent to the median eminence, which is blood–brain barrier permeable, thus allowing access to peripheral signals. As shown in Figure 1, there are two primary neuronal subpopulations within the ARC controlling energy balance: (1) ARCPOMC neurons that contain the pro-opiomelanocortin (POMC) gene, which is proteolytically cleaved to produce biologically active peptides including α-melanocyte stimulating hormone (α-MSH), adrenocorticotropic hormone, and β-endorphin; and (2) ARCAgRP neurons that co-express neuropeptide Y (NPY) and agouti-related peptide (AgRP) [11]. Classically, the activation of ARCPOMC neurons results in the release of α-MSH, which binds to melanocortin 3 and 4 receptor (MC3/4R)-expressing neurons in the paraventricular nucleus of the hypothalamus (PVN) and brainstem to reduce food intake and modulate the autonomic nervous system pathways controlling adipose thermogenesis and energy expenditure [12][13]. The activity of these ARCPOMC neurons is regulated by numerous peripheral hormonal signals, including leptin, insulin, glucocorticoids, and thyroid hormones [14]. ARCAgRP neurons inhibit ARCPOMC neurons as well as downstream melanocortin pathways to conversely increase food intake and decrease energy expenditure (Figure 1) [15]. 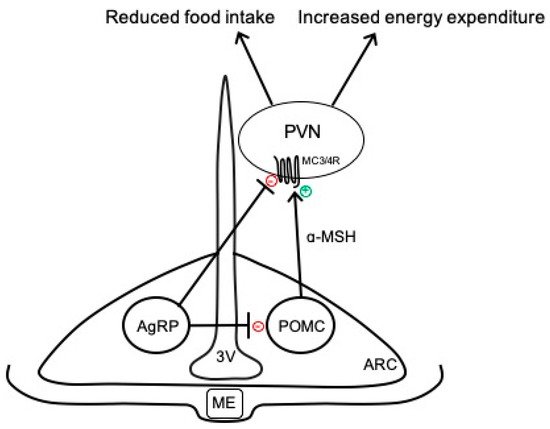 Figure 1. Simplified overview of classical neurocircuits within the arcuate nucleus of the hypothalamus controlling energy balance. 3V, third ventricle; AgRP, agouti-related peptide; α-MSH, α-melanocyte stimulating hormone; ARC, arcuate nucleus of the hypothalamus; MC3/4R, melanocortin-3 and -4 receptors; ME, median eminence; POMC, proopiomelanocortin; PVN, paraventricular nucleus of the hypothalamus.
In addition to the classically defined neurocircuits described above and in Figure 1, accumulating evidence supports the heterogeneity of ARCPOMC neurons in terms of responses to peripheral signals, receptors expressed, and neurochemical identity [11][16][17]. For example, separate populations of leptin- and insulin-responsive POMC neurons exist in the ARC [18]. In addition to neuropeptides, such as α-MSH, ARCPOMC neurons can co-release amino acid transmitters, such as glutamate and γ-aminobutyric acid (GABA), to exert more rapid physiological actions [11][17]. Indeed, functionally distinct subsets of glutamatergic and GABAergic ARCPOMC neurons exist in rodents, with only a small percentage co-releasing both neurotransmitters [19][20]. These neurotransmitter subpopulations have distinct localization in the ARC, receive separate hormonal and neuronal inputs, and send outputs to different brain regions [20]. ARCAgRP neurons are also responsive to various stimuli, such as insulin and leptin, and are primarily GABAergic; however, subsets of these neurons express somatostatin (Sst) or corticotropin-releasing hormone [21]. The functional importance of these distinct subsets of ARCPOMC and ARCAgRP neurons to the neural control of energy balance is not fully understood but may provide an opportunity to develop selective approaches for the targeting of metabolic versus cardiovascular outcomes.
The ability of ARC neurocircuits to modulate energy expenditure involves the sympathetic-mediated activation of thermogenesis in adipose tissue. The ARC and PVN are functionally connected to brown adipose tissue via polysynaptic intra-hypothalamic and brainstem pathways that modulate the sympathetic innervation of adipose depots [9]. The stimulation of these hypothalamic-brown adipose-thermogenic pathways results in the disinhibition of the raphe nucleus and increased sympathetic outflow through the spinal cord. This sympathetic activation results in the release of norepinephrine to activate postsynaptic β3-adrenoreceptors on adipocytes, which elicits mitochondrial uncoupling to induce thermogenesis and increase energy expenditure [9][22]. In addition to the ARC, several other nuclei contribute to sympathetic-mediated brown adipose thermogenesis (e.g., preoptic area, dorsomedial, lateral, paraventricular, raphe) [9]. While the targeting of brown adipose tissue has been of great interest for obesity treatment, this approach appears limited in efficacy due to the small amounts of this tissue in humans [23]. A more recent discovery is that white adipose tissue, which is typically involved in energy storage, also receives sympathetic input from hypothalamic pathways, including the ARC, and can be converted to function more like brown adipose tissue to promote thermogenesis [24]. This white adipose “browning” or “beiging” has emerged as a potential target in the development of innovative pharmacological strategies for the treatment of obesity. White adipose browning is a particularly attractive target given the large amounts of this tissue in obesity, and that it can be physiologically or pharmacologically stimulated (e.g., cold, β3-agonists) [25][26]. An important caveat when activating ARC-adipose pathways to induce thermogenesis and increase energy expenditure, however, is that it can produce diffuse sympathetic activation to cardiovascular end organs, resulting in elevated blood pressure. Identifying new targets that selectively increase sympathetic outflow to either brown or white adipose tissue, without affecting autonomic tone to cardiovascular organs, would be a major advance.
Obesity is well recognized to disrupt ARC neurocircuits controlling energy balance. Prolonged high-fat diet (HFD) feeding in mice induces an obese phenotype that is associated with increased neuronal activity in the hypothalamus, as measured by c-fos-like immunoreactivity [27][28]. This hypothalamic neuronal activation in response to HFD may in part reflect the increased activity of ARCAgRP neurons to provide inhibitory signaling to ARCPOMC neurons [29]. A more recent study showed that chronic HFD in mice is associated with the suppression of leptin gene-expression signaling pathways selectively in ARCAgRP neurons, which may contribute to metabolic leptin resistance and be secondary to altered cAMP response element-binding protein signaling [30]. In addition to enhanced ARCAgRP activity, POMC neuronal firing rates are reduced by HFD [31]. This reduced ARCPOMC neuronal activity in obesity has been attributed to numerous factors, including inflammation, reactive oxygen species, endoplasmic reticulum stress, and altered hypothalamic autophagy [16]. Obesity is also associated with decreased brown adipose tissue activity and attenuated metabolic responses to the hormone leptin, which, under normal conditions, promotes satiety and stimulates sympathetic outflow to brown adipose tissue to increase resting metabolic rate [32][33]. Leptin-stimulated sympathetic outflow to cardiovascular organs, however, remains intact in obesity, suggesting a phenomenon of selective leptin resistance [33][34]. Overall, chronic HFD exposure is associated with the remodeling of hypothalamic circuits, including increased ARCAgRP and decreased ARCPOMC neuronal activity, which can functionally contribute to energy imbalance and related metabolic complications in obesity.

More
© Text is available under the terms and conditions of the Creative Commons Attribution (CC BY) license (http://creativecommons.org/licenses/by/4.0/)
Upload a video for this entry
Information
Subjects: Neurosciences
Contributor MDPI registered users' name will be linked to their SciProfiles pages. To register with us, please refer to https://encyclopedia.pub/register :
Amy Arnold
View Times: 58
Revisions: 3 times (View History)
Update Time: 22 Jul 2021
Table of Contents
1000/1000
Hot Most Recent