Submitted Successfully!
Thank you for your contribution! You can also upload a video entry related to this topic through the link below:
https://encyclopedia.pub/user/video_add?id=12267
Check Note
2000/2000
Peptide Allergen Immunotherapy
Edit
Upload a video
This entry is adapted from 10.3390/pharmaceutics13071007

Allergic diseases are highly prevalent disorders, mainly in industrialized countries where they constitute a high global health problem. Allergy is defined as an immune response “shifted toward a type 2 inflammation” induced by the interaction between the antigen (allergen) and IgE antibodies bound to mast cells and basophils that induce the release of inflammatory mediators that cause the clinical symptoms. Currently, allergen-specific immunotherapy (AIT) is the only treatment able to change the course of these diseases, modifying the type 2 inflammatory response by an allergenic tolerance, where the implication of T regulatory (Treg) cells is considered essential.

AIT is considered a therapeutic vaccine that establishes tolerance against specific allergens[1] . This response mainly consists in the production of allergen-specific IgG antibodies that can block IgE binding to allergens, and alterations in the cellular immune response, particularly a reduction of allergen-specific Th2 responses [2]. Thus, tolerance induction is dependent on the immunogenicity and allergenicity of the allergen used as a vaccine. In fact, although the current AIT guidelines are effective, in some patients AIT may cause side effects that other formulations as modified proteins or peptides could avoid.

In the era of molecular diagnosis and treatments, new AIT approaches are being developed to decrease the allergenicity and adverse effects, as well as shorten the duration of the convectional AIT [3][4]. To achieve this, studies have been conducted on the use of hypoallergens, recombinant proteins, and methods other than subcutaneous and sublingual administration are under studying [5]. One of the most promising approaches is the use of peptides derived from the main allergens [6].

This new therapy uses soluble synthesized allergen fragments of variable lengths and is based on the primary structure of the allergen. Depending on the length of the fragments and their ability to induce tolerance, peptide-based vaccines can be divided into those that use IgE-mediated peptides and other using T-cell peptides [7].

Vaccines designed using IgE-mediated peptides consist of long peptides (20–40 amino acids) that share main B-cell epitopes of the allergens; therefore, these peptides depend on the folded tertiary structure. On the other hand, the use of short synthetic peptides (10–17 amino acids), called T-cell peptides, is based on the lack of conformational B-cell epitopes. In theory, after peptide processing, the immune response should be led by Th1 and Treg responses, with a secretion of IL-10 that decreases eosinophils, basophils and mast-cells recruitment to the affected tissues and weakens the ability to release mediators. Moreover, this type of peptides is unable to bind to IgE-FcεRI on effector cells, mainly due to the small peptide size [6][8]

AIT with peptides has been studied for more than 20 years, and the first clinical trials were developed against cat allergy[9][10][11][12][13][14][15][16][17][18], house-dust-mites allergy (HDM) [19][20][21][22], and pollen allergies [23][24][25][26], but different effective clinical results have been obtained [27]. Regarding HDM, different types of peptides from Der p 1, one of the major allergens of Dermatophagoides pteronyssinus, have been analysed [28][29][30]. One of the most recent study that failed to achieve a clinically significant benefit for the treatment against cat allergies was a large-scale phase III study using a mix of peptides from Fel d 1 (major cat allergen) containing T-cell epitopes The authors concluded that the mechanisms of IT with peptide allergens could be different from the whole-allergen IT and suggested that the decrease of CRTh2 could result in a failure to recruit and activate these cells, thereby reducing Th2 inflammatory responses in the airways [31].

Olive (Olea europaea) pollen is one of the most important causes of respiratory allergy in the Mediterranean area and some regions of North America, South Africa, Japan, and Australia [30] Specifically in Spain, it is the second most common cause of respiratory allergy after pollinosis to grass (approximately a 60% of all pollen-allergic patients are sensitized to olive pollen). Moreover, in certain areas of Andalusia (south of Spain), it is the most common respiratory allergy, with 84% of pollen-allergic subjects sensitized to olive pollen. In addition, the number of olive trees around the world is expected to increase considerably due to the health benefits of the Mediterranean diet, of which olive oil is a staple, thereby raising concerns that the number of patients with this pollinosis will increase worldwide [31].

At least 20 proteins with allergenic activity have been found in the olive pollen, and Ole e 1 is considered the major allergen. It is a 145-aa glycoprotein with sequence microheterogeneity, highly dependent on the olive cultivar analyzed [32][33]. The importance of this allergen also resides in the high degree of sequence homology with other main allergens from theOleaceaefamily as Fra e 1 (Fraxinum) and Syr v 1 (Syringa), which are responsible of a substantial percentage of pollinosis in Central Europe [33][34]. Besides Ole e 1, a total of fifteen olive allergens (Ole e 1 to 15) have been characterized [35][36][37], several of which (e.g., Ole e 10, Ole e 7) are minority proteins in the whole-pollen extract though are major allergens in regions with extremely high antigenic load and are associated with the most severe symptoms of the disease (severe asthma) [38][39].

Currently, the standard treatment for olive-pollen-allergic patients is based on specific immunotherapy with whole-olive-pollen extracts. Despite improvements in the extracts used in AIT, the effectiveness of this strategy is highly variable, as it depends on the patient’s own sensitization, the severity of the clinical manifestations, and the treatment itself (the difficulty of standardizing allergenic extracts causes great variability in their therapeutic potential).

Besides, with AIT there is a risk that allergic patients may become sensitized to other components present in the extracts, an aspect of special relevance in olive pollinosis since minor components of the pollen (e.g., Ole e 10, Ole e 7) can be especially allergenic and could induce severe clinical symptoms in high doses. Consequently, the search for improvements to these types of vaccines is one of the most pressing objectives of research in the field of allergy. The design of new vaccines with allergen-derived peptides could offer multiple advantages as discussed above.

Ole e 1 is a 145-aa glycoprotein that was firstly sequenced by Edman degration [40] showing high microheterogeneity in several positions and 1 N-glycosylation site located at Asn-111 of the polypeptide chain (Figure 1A), which has been related with allergenic properties [41]. It has at least 4 B-cell epitopes [42]and 2 regions, aa 91 to 102 and aa 109 to 130, which were defined as immunodominant T-cell epitopes (later included in the Immune Epitope Database and Analysis Resource (IEDB), http://www.immuneepitope.org/refId/1005198, accessed on 20 May 2021), or regions mainly recognized by olive-pollen-allergic patients, able to induce in vitro a T cell-proliferative response with no IgE-binding capability [43]. 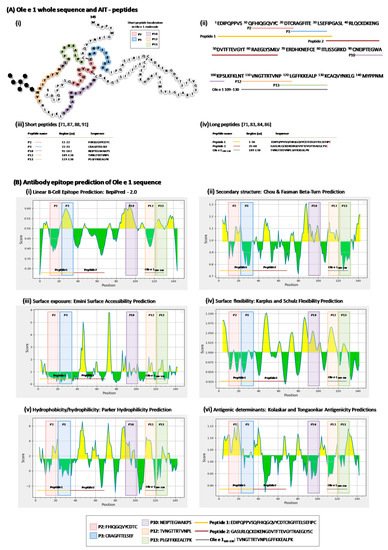 Figure 1. (A) Ole e 1 whole sequence and AIT peptides. (i,ii) Ole e 1 schematic and lineal sequence, respectively. In colors are highlighted the different peptides commented in this review. First, short peptides, or T-cell epitopes, most discussed in the review are highlighted in the schematic sequence in red (P2), blue (P3), purple (P10), orange (P12) and green (P13). On the linear sequence, both short and long peptides (B-cell epitopes) are highlighted, with a lot of sequence homology between both groups. (iii,iv) Short and long peptides relevant information, respectively: name, color legend, amino acid region within Ole e 1 whole-protein and peptide sequence. (B) Antibody epitope prediction of Ole e 1 sequence. Antibody or B-cell epitope in silico predictions evaluated by the IEDB server using the Ole e 1 sequence shown as imput sequence. (i–vi) Linear B-Cell epitopes, Chou and Fasman Beta-Turn, surface accessibility surface flexibility, Parker’s hydrophilicity and antigenicity predictions, respectively. This tool gives a probability score, represented in the y-axis, for each amino acid within the protein sequence, which positions are represented along the x-axis. The location of the peptides in the sequence is shown in the graphs, in order to identify the characteristics of the protein in the most immunomodulatory regions experimentally identified.

In conclusion, experimental models and clinical trials have demonstrated the potential usefulness of peptides derived from main allergens as a promising tool for the treatment of wide type of allergies. Although the underlying immunological mechanisms are not currently well understood, peptide immunotherapy appears to be dependent upon IL-10 and other Tregs mediators. In the specific case of olive pollen, the use of peptides has demonstrated to regulate genes and routes of activation that are involved in the tolerogenic response [44]. In this sense, the combination of five short dodecapeptides Ole e 1 derived-peptides is able to prevent the olive-pollen proliferative response associated to IL-10 and IL-35 regulatory cytokines production in allergic patients [45]. Moreover, these combinations of peptides are not capable of inducing basophils activation, a pre-requisite for the development of a new peptide vaccine. Further basic and clinical studies are needed to broad knowledge of these capacities and to confirm their possible use in routine clinical practice.

More
© Text is available under the terms and conditions of the Creative Commons Attribution (CC BY) license (http://creativecommons.org/licenses/by/4.0/)
Upload a video for this entry
Information
Subjects: Allergy
Contributor MDPI registered users' name will be linked to their SciProfiles pages. To register with us, please refer to https://encyclopedia.pub/register :
Blanca Cárdaba
View Times: 52
Revisions: 2 times (View History)
Update Time: 21 Jul 2021
Table of Contents
1000/1000
Hot Most Recent