Submitted Successfully!
Thank you for your contribution! You can also upload a video entry related to this topic through the link below:
https://encyclopedia.pub/user/video_add?id=12254
Check Note
2000/2000
Urbanization alters soil microbial communities
Edit
Upload a video
This entry is adapted from 10.3390/microorganisms9071470

Urban development is one of the leading causes of biodiversity change. Understanding how soil microorganisms respond to urbanization is particularly important because they are crucial for the provisioning of ecosystem functions and services. Our results showed that microbial richness and community composition exhibited nonsignificant changes over time regardless of the location. Soil fungal richness was lower in moderately and highly urbanized locations, but soil bacterial/archaeal richness was not significantly different among locations. Both bacteria/archaea and fungi exhibited significant differences in community composition across locations. After inferring potential functional groups, soils in the highly urbanized location had lower proportions of arbuscular mycorrhizal fungi and soil saprotrophic fungi but had higher proportions of bacterial taxa involved in aromatic compound degradation, human pathogens, and intracellular parasites. Furthermore, ammonia-oxidizing bacteria were more abundant in the highly urbanized location, but ammonia-oxidizing archaea were more abundant in lowly and moderately urbanized locations. Together, these results highlight the significant changes in belowground microbial communities across an urbanization gradient, and these changes might have important implications for aboveground–belowground interactions, nutrient cycling, and human health.

Urban development is modifying natural landscapes, as well as altering biodiversity and ecosystem services, at an unprecedented rate [1]. Currently, 55% of the global population is living in urban areas, and this proportion is projected to increase to 68% by 2050 [2]. Residents of urban landscapes live at high densities and built structures cover most of the land surface, resulting in significant modifications to the natural environment [3]. For example, in arid ecosystems, green-space fragmentation can impact biodiversity through natural habitat reduction and net primary production changes [4]. One major ecological consequence of urbanization is biotic homogenization, in which ecological communities become progressively more similar due to human-induced landscape simplification or species invasions [5]. Most research has focused primarily on understanding how plants and animals either adapt or go extinct due to urban pressures such as increased nutrient inputs, atmospheric pollution, and habitat degradation [6]. However, the consequences of urbanization on microbial communities have received little attention (but see [7]).
Studying how microorganisms respond to urbanization is particularly relevant given their fundamental roles in maintaining ecosystem functions and services [8], notably human health and well-being [9]. On the one hand, some microbes can cause infectious diseases to humans by acting as important pathogens [10]. On the other hand, it has been proposed that the positive health effects of proximity to nature might be attributable to the exposure to microbial diversity that builds up the antigenic repertoire of the immune system [11].
Urbanization can have significant impacts on microbial richness and community composition. Previous studies have shown that urbanization often leads to decreasing geographic variability in microbial community composition [12][13]. However, the effects of urbanization can vary among microbial taxonomic groups. For example, soil fungal richness was found to decrease in highly urbanized areas, but bacterial richness showed no response [13]. Another soil study showed that fungal richness and community composition did not differ with urban stress, whereas bacterial community composition did [14]. Furthermore, urban development in arid ecosystems can alter soil microbial carbon and nutrient cycling by shaping the types of microorganisms found in urban habitats [15]. While these studies have provided significant insights into the ecological impacts of urbanization on microbial communities, it remains largely unknown whether or not the temporal dynamics of microbial communities change across urbanization gradients. It has been argued that the richness and community composition of microorganisms can vary across days, seasons, and years [16][17][18][19]. Such temporal changes in microbial communities can reflect community stability and have important implications for predicting microbial responses to disturbances [20]. Therefore, a better understanding of the ecological impacts of urbanization on microorganisms requires longitudinal studies that examine how the temporal dynamics of microbial communities vary across urbanization gradients.
Globally, arid ecosystems constitute 41% of the land surface and are home to over 38% of the human population, and these numbers are likely to increase substantially as a consequence of desertification and the projected population growth [21]. The arid Southwestern USA is experiencing one of the fastest population growths in the country [22]. Denser populations in arid areas with higher urbanization pressure require solutions that consider the role of environmental microorganisms. Here, we collected monthly soil samples over one year across three locations representing an urbanization gradient in Tucson, Arizona, USA (Figure 1). We characterized the soil bacterial/archaeal and fungal communities by sequencing environmental DNA in order to examine if the soil microbial richness and community composition, as well as their temporal dynamics, change across the urbanization gradient. 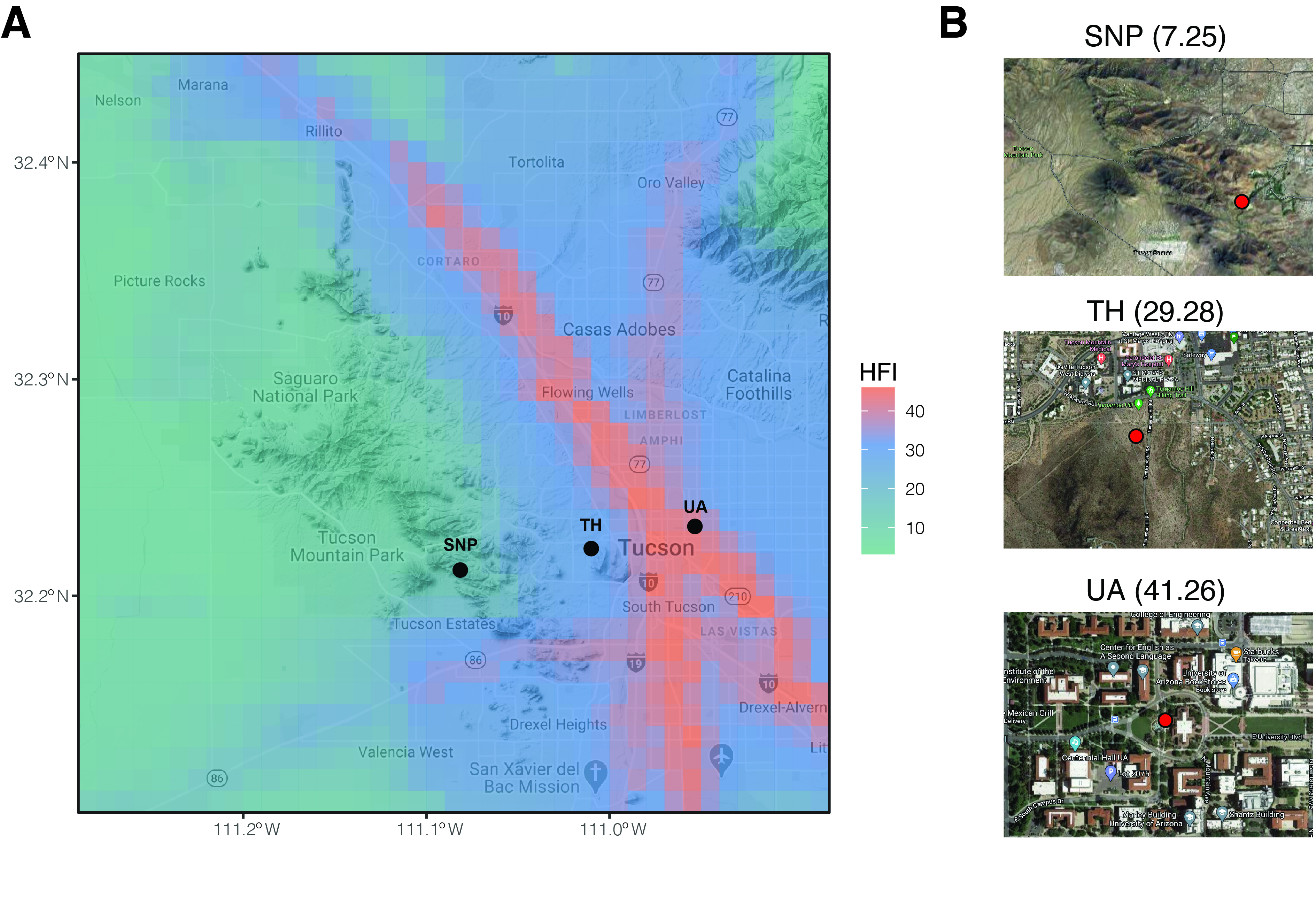 3. Effects of Location and Time on Predicting Microbial Richness and Community Composition 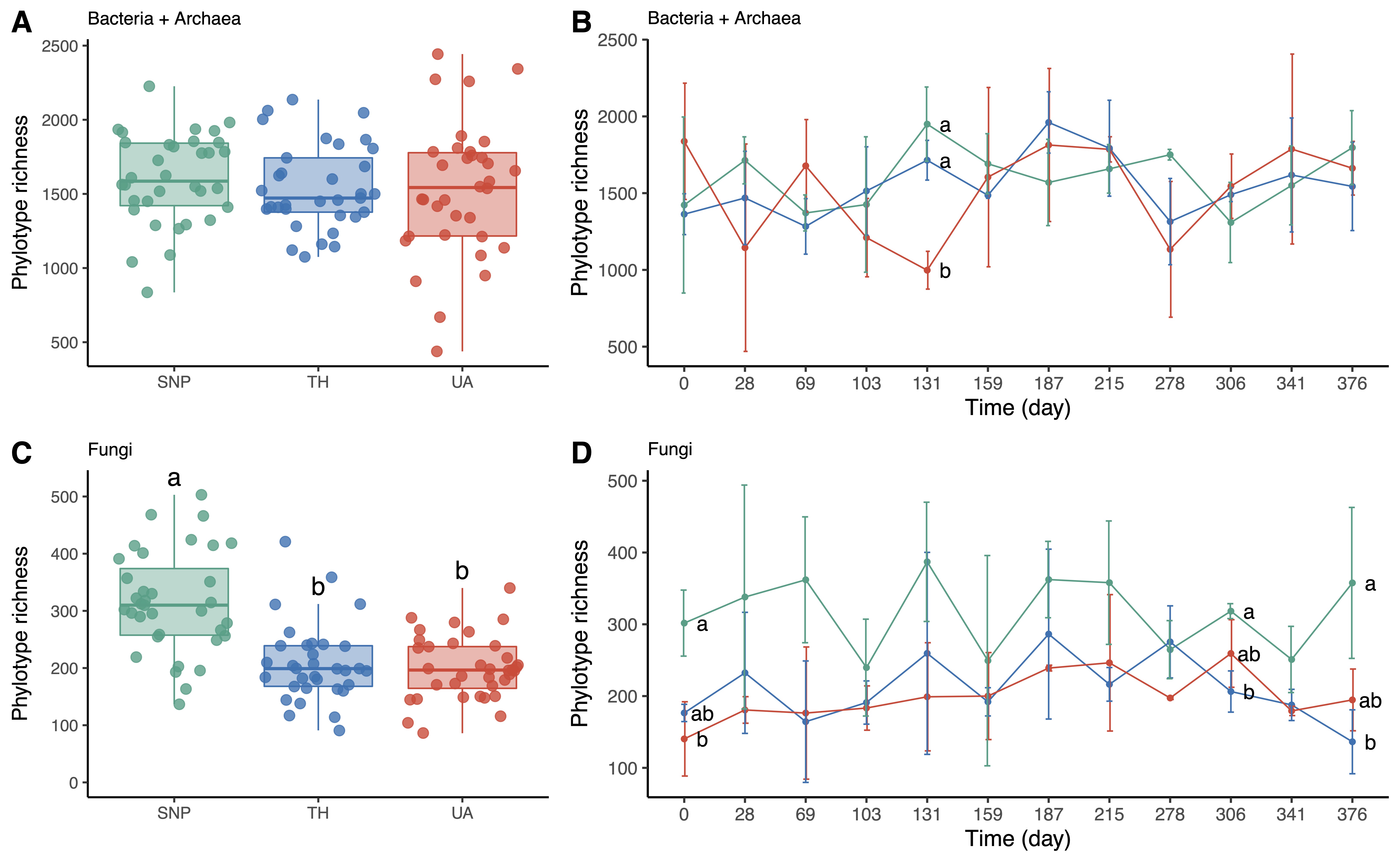 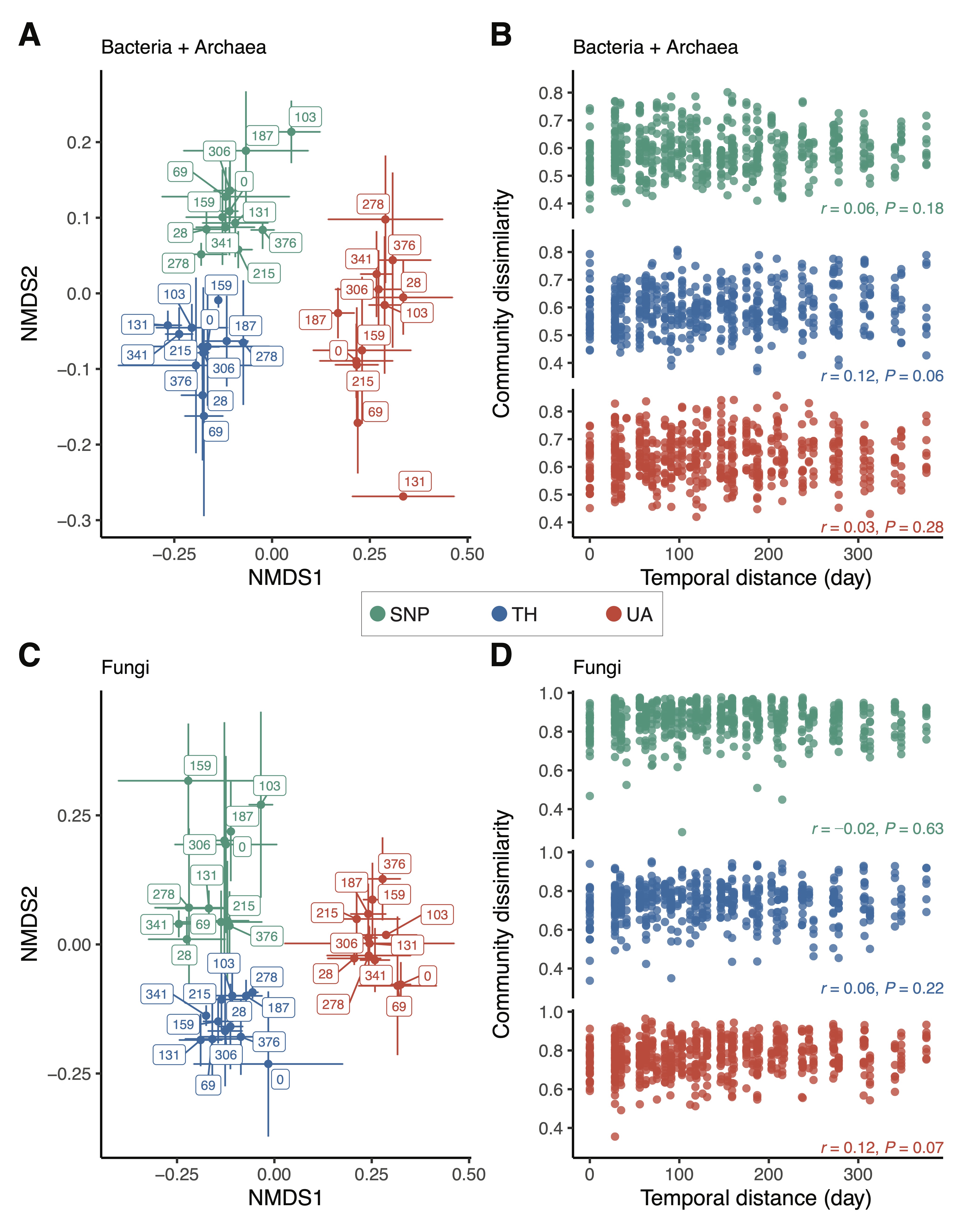 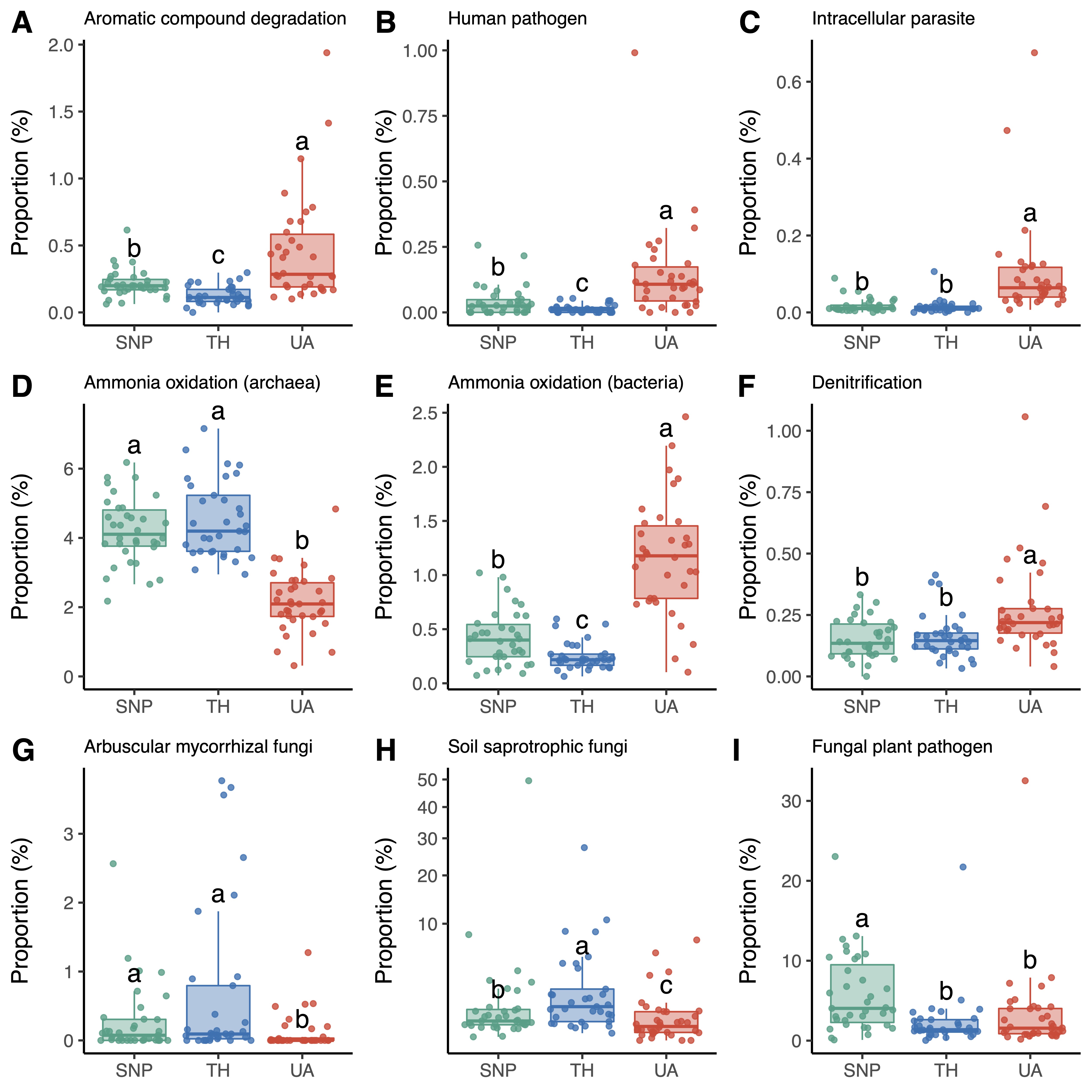 By characterizing the temporal dynamics of belowground microbial communities in three locations representing an urbanization gradient, we found that microbial communities did not exhibit significant changes over time but changed significantly across locations. These changes in belowground microbial communities might have important implications for critical ecosystem functions and services. Our study was conducted at a local scale in the arid Southwestern USA, and thus, the generalizability of our results needs to be further examined using data collected at larger scales and in other habitats. Urbanization necessitates the development of a research agenda on soil microbiomes to inform policy and management.

More
© Text is available under the terms and conditions of the Creative Commons Attribution (CC BY) license (http://creativecommons.org/licenses/by/4.0/)
Upload a video for this entry
Information
Subjects: Microbiology
Contributors MDPI registered users' name will be linked to their SciProfiles pages. To register with us, please refer to https://encyclopedia.pub/register :
Yongjian Chen
,
Julia Rudolph
View Times: 66
Revisions: 3 times (View History)
Update Time: 21 Jul 2021
Table of Contents
1000/1000
Hot Most Recent