Submitted Successfully!
Thank you for your contribution! You can also upload a video entry related to this topic through the link below:
https://encyclopedia.pub/user/video_add?id=12237
Check Note
2000/2000
Nanocarbon-Iridium Oxide Nanostructured Hybrids
Edit
Upload a video
This entry is adapted from 10.3390/molecules26144236

Nanostructuring nanocarbons with IrOx yields to material coatings with large charge capacities for neural electrostimulation, and large reproducibility in time, that carbons do not exhibit.

As mentioned, IrOx anodically deposited is among the best conducting substrates for neural growth. IrOx, understood as a complex oxohydroxide of general formula K1.7IrO0.8 (OH) 2.2 1.8 H2O, had been anodically deposited before [20][21], and had distinguished from crystalline IrO2 or from anodic oxidation of metallic Ir metal. Anodic deposition of precursor solutions based on slowly hydrolyzed IrCl3 or IrCl4 solutions in alkaline conditions yields IrOx, yield coatings with poor adhesion and macroscopic cracks if constant current protocols are used [21]. However, dynamic pulsed anodic deposition renders thin layers (170 nm for 50 cycles and 300 nm for 100 cycles) of IrOx that are well adhered and have a one order of magnitude larger charge capacity [21] than conventional IrOx obtained by constant current deposition methods. The same dynamic deposition successful for IrOx offers later additional mechanisms for the formation of hybrids. The final solid IrOx coating is amorphous but contains K+ in a reproducible stoichiometry. Chemical exchange of K+ is possible and the ion is easily removed by soaking in water, and easily replaced by H+ or Na+.
It is worth remarking here that the nature of the Iridium precursor solution has been confusing in the literature [27], and the formation of hybrids discussed below benefits from such discussion. The existence of a nanoparticle suspension has been claimed upon aging of iridium solutions, based only on data from high-voltage TEM equipment. However, electron diffraction data from iridium solutions and coatings also show the existence of redox processes occurring under the electron beam. The existence of UV-VIS charge-transfer redox exchange conferring the blue color to the hydrolyzed solutions involve mixed-valence polynuclear Ir oxo species resulting from a hydrolysis process, and not necessarily nanoparticles of IrO2 [21]. Precipitation with excess K+ ions generates a solid with 2.2 K/Ir ratio, while anodic deposition yields a K/Ir ratio of 1.7 according to XPS [21]. That means that deposition is not a flocculation or electrophoretic process, but a true redox electrochemical process. Electrochemical quartz microbalance study also shows additional features for the deposition [21], where K+ is intercalated and deintercalated depending on the voltage applied during the process. Dynamic light scattering (DLS) measurements of the solution, yield similar cluster sizes found in initial low-intensity TEM measurements (10–20 nm) instead of the 2 nm size found in high-voltage TEM, which is truly a redox modification to metallic iridium (see Figure 1 and Figure 2). Careful interpretation of the global data allows us to identify that the electron beam acts as an electrochemical cell reducing Ir-oxo species containing K+ and OH− to KxIrO2 and finally to Ir metal suspensions of 2 nm size nanoparticles, by a slow process for low-intensity electron beams, and very fast for high-intensity beams. Thus, the existence of iridium anionic oxoclusters in solution, formed during hydrolysis in a similar way to known polyoxometalates [28], is a more coherent explanation than thinking about generic nanoparticles. Therefore, as suggested above, the deposition of IrOx is not an electrophoretic pure process of suspended IrOx particles but, as other electrodeposition processes, is a full redox oxidation process of iridium oxoclusters in solution yielding an amorphous oxohydroxide. 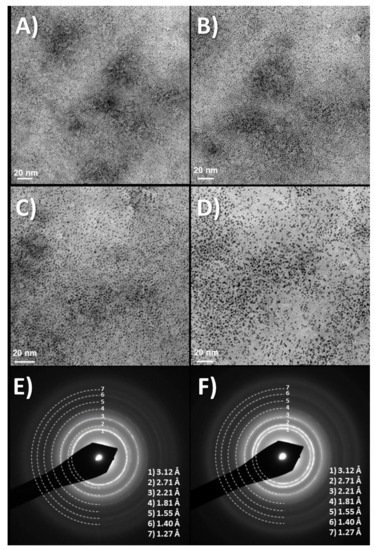 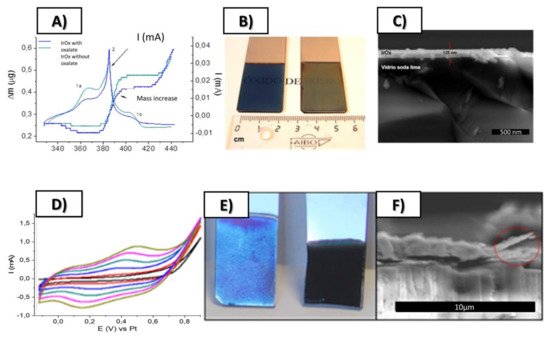 Figure 2. Top: (A) Simultaneous cyclic voltammetry and ECQM mass changes during dynamic Electrodeposition of IrOx involving mass deposition and K+ intercalation/deintercalation, (B) SEM lateral images of resulting coatings on Pt (12 nm) glass slides, (C) Macroscopic images of IrOx deposited on Pt (12 nm)-Ti (5 nm)-glass substrates. Bottom (D) Typical electrodeposition Cyclic voltammetry of IrOx-Nanocarbon hybrids (this case IrOx-NGO) (E) macroscopic images showing that the first layers are mostly IrOx and (F) SEM lateral images of the coatings. From ref. [24][29] Published with permission of Elsevier.
That discussion is relevant in terms of possible nanocarbon IrOx hybrid formations, since the nanostructure is dependent on the interactions among both components. It is also relevant because, although carbons do not deposit in absence of iridium, the deposition of IrOx drives the deposition of carbons, by the existing interaction among them.