Submitted Successfully!
Thank you for your contribution! You can also upload a video entry related to this topic through the link below:
https://encyclopedia.pub/user/video_add?id=12183
Check Note
2000/2000
Nodular Trichoblastoma
Edit
This entry is adapted from 10.3390/dermatopathology8030032

Trichoblastoma (TB) is a rare biphasic benign adnexal neoplasm originating from follicular germ cells which is classified in the latest WHO “Skin Tumours” classification (2018) among lesions with a favorable clinical outcome [1][2], although rare cases of trichoblastic carcinoma as an evolution of TB have been described [3]. Clinically, this lesion can simulate basal cell carcinoma (BCC), making the diagnosis more difficult. Furthermore, there are several variants of Trichoblastoma and a good knowledge of these is essential for correct diagnosis and management.

The first case was a 73-year-old woman who complained of the persistence of a skin lesion at the level of the right nasolabial groove (Figure 1), that had been present for several years. The patient reported frequent traumas and subsequent bleeding, that prompted her to refer to a dermatologist. At the clinical level, the lesion appeared as a well circumscribed symmetrical pinkish mass with beveled edges, measuring 1.2 cm in diameter. Clinical diagnosis of basal cell carcinoma or, secondarily, of a sebaceous cyst was made. The lesion was excised and sent to the Pathology Laboratory. 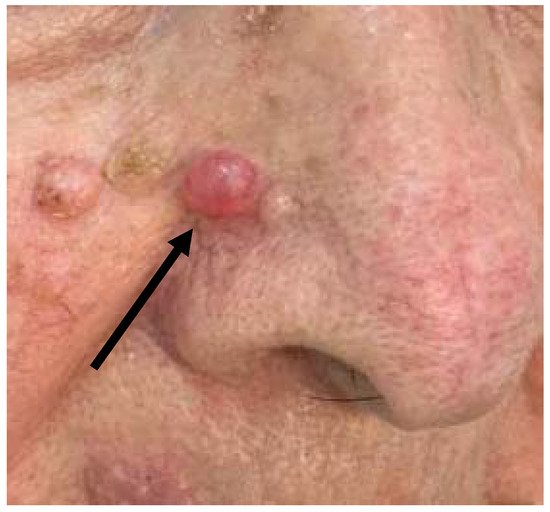 The second case was a 67-year-old man who had suffered for an unspecified number of years from a cyst-like lesion of the nose. He had no history of trauma and/or bleeding, but for aesthetic reasons he had decided to refer to the dermatologist. Clinically, the mass was solitary, well circumscribed, nodular, measuring about 1.0 cm in diameter (Figure 2A,B). Surgical removal was carried out and the specimen was sent to the Pathology Laboratory. 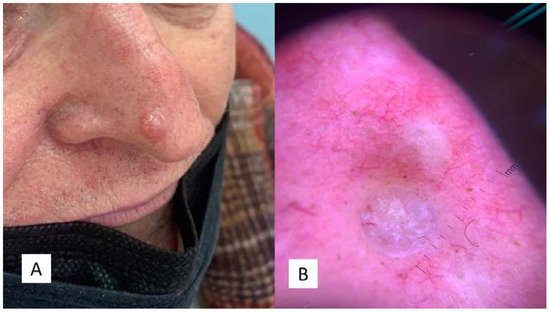 Figure 2. (A) Clinical features of the “Case 2” lesion, well circumscribed, symmetrical, smooth bordered, skin-colored pinkish or brown, at the level of the passage from the tip to the right nasal wing. (B) Dermoscopic features of TB with arborizing vessels and teangiectasias.
Both specimens were subjected to sampling, processing, paraffin embedding, microtome cutting and Hematoxylin/Eosin (H&E) staining.

The first lesion consisted of a proliferation of basaloid cells (high N/C ratio) localized in the middle and deep dermis, with no obvious connection to the epidermis. This lesion consisted of small, irregular nests of basaloid cells (variant with small nodules of TB), surrounded by a stroma of fibrocytes and various pilar differentiation foci (Figure 3A). The neoplasm did not reach the subcutis. In view of the absence of a clear peripheral “palisade” and mild mitoses (Figure 3B), the diagnosis of the Trichoblastoma variant “with small nodules” was made. The margins were disease-free, and no disease recurrence had occurred at 1 year of follow-up.

Figure 3. Proliferation of numerous small and irregular nests of basaloid cells with no obvious connection to the epidermis (hematoxylin and eosin, original magnification, (A) 40× (B) 100×).
The second case was characterized by a population of basaloid cells aggregated in large nodules, with some evidence of a “peripheral palisade” (Figure 4A,B). There was no connection with the overlying epidermis, but there was a marked tendency to deep infiltration down to the muscular plane. The mitotic index, in this second case, was higher and owing to the greater aggressiveness of the lesion, extended surgical resection margins and careful follow-up were decided upon. After radical surgery with negative margins for neoplasia, at 18 months of follow-up, no recurrence of the disease was observed.

Figure 4. Proliferation of large nests of basaloid cells without connection to the epidermis (hematoxylin and eosin, original magnification, (A) 40× (B) 100×).

Trichoblastoma is a rare benign tumor of the follicular germ cells, in which follicle development may be partly or completely replicated [4]. It was first described by Headington as a differentiated follicular neoplasm [5]. In the following years, different nomenclatures were adopted, including “trichogenic tumor” [6] or “trichogenic trichoblastoma” [7]. In a 1995 review, Schirren et al. [8] reviewed the knowledge of this entity and since then, the term Trichoblastoma has been exclusively used. Usually, a Trichoblastoma measures more than 1 cm in diameter and may involve the deep dermis and/or subcutis [9]. Our two new cases were also 1 cm or more, and both showed a tendency to infiltrate the deep dermis, and sometimes reach the subcutis. The parts of the body most affected are the head and neck districts [2], although other localizations have also been reported, such as the vulva [10]. In addition, various cases of lesions joining TB with other cutaneous neoplasms have been reported: for example, with inverted follicular keratosis [11], or with syringocystoadenoma papilliferum in a common sebaceous nevus [12], or again with a dilated pore of Winer [13]. There has been much debate about the importance of identifying dermoscopic criteria that could allow a correct differential diagnosis between TB and BCC, but a recent 2020 review [14] clarified that, despite the efforts of Ghigliotti et al. [15] in demonstrating significantly more blue–gray ovoid nests and globules in BCC compared to TB, these features may also be present in TB, so a confirmatory histopathological diagnosis is still necessary today. Many, perhaps most, dermatopathologists regard trichoepithelioma (TE) as a variant of trichoblastoma (TB) with smaller aggregations of cells; indeed, conventional and desmoplastic trichoepithelioma have also been referred to as cribriform and columnar trichoblastoma, respectively [2][6]. Requena L. et al., for example, consider trichoepithelioma to be a superficial variant of trichoblastoma, showing characteristics of a benign, symmetrical and well-defined tumor consisting mainly of germinative follicular cells embedded in an abundant fibrotic stroma [6].
In the latest WHO 2018 “Skin Tumors” classification [2], different variants of TB are recognized, making the differential diagnosis even more complex even for the dermatopathologist: nodular [16] (as in our two cases), retiform, cribriform [17], racemiform [18] and columnar patterns of TB. Furthermore, rare variants of TB include clear cell [18], pigmented (pigmented TB) [19][20] and adamantinoid lesions [21]. It is generally believed that another rare adamantine variant of TB is cutaneous lymphadenoma, a rare adnexal tumor with a prominent lymphocytic infiltrate in the tumor nests [22][23]. In addition to histopathology, various scientific works [24] have attempted to identify immunohistochemical markers that could reliably differentiate between TB and BCC, including CD34 positivity of the stroma fibrocytes in TB versus negative stroma fibrocytes in basal cell carcinoma [25][26][27]; different BCL-2 expression, that is diffusely positive in epithelial cells of BCC but only marks the peripheral layer of cells in TB [28][29]; finally, the number of CK20-positive Merkel cells, more abundant in TB than in BCC. Immunohistochemical expression of PHLDA1 (a marker of follicular stem cells) is positive in TB and completely negative in BCC [30]; conversely, markers such as CD10, follistatin and Bmi-1 have not yet been shown to offer a safe differential diagnosis [31]. Leonid Izikson et al. reported that expression of the androgen receptor could be more indicative of BCC than TB [32].

More
© Text is available under the terms and conditions of the Creative Commons Attribution (CC BY) license (http://creativecommons.org/licenses/by/4.0/)
Upload a video for this entry
Information
Subjects: Dermatology
Contributor MDPI registered users' name will be linked to their SciProfiles pages. To register with us, please refer to https://encyclopedia.pub/register :
Gerardo Cazzato
View Times: 47
Revisions: 2 times (View History)
Update Time: 20 Jul 2021
Table of Contents
1000/1000
Hot Most Recent