Submitted Successfully!
Thank you for your contribution! You can also upload a video entry related to this topic through the link below:
https://encyclopedia.pub/user/video_add?id=12136
Check Note
2000/2000
Non-Invasive Biomarkers for Asymptomatic Patients
Edit
This entry is adapted from 10.3390/jcm10132762

Endometriosis is a disease with both physical and psychological consequences. It can affect fertility and chances of having a baby as well as getting an education or a steady job, it can also reduce the quality of a woman’s social life and her physical activity.

Endometriosis is a progressive disease with features of chronic inflammation. According to some scientific studies, there is a link between an inflammatory process and oxidative stress which may contribute to the development of endothelial dysfunction [1]. Other research points to immunological dysfunction as an initiator of the disease [2]. However, although inflammatory mediators are upregulated and inflammatory cells are activated, a pre-existing inflammation may not contribute to the development of endometriosis [3].

It is speculated that the polygenetic and polyepigenetic hypotheses, which have several clinical implications, are feasible enough to elucidate changes in the endometrium, immunology and placentation. A typical, deep and cystic ovarian endometriosis is often described as clonal in origin and manifested by clinical heterogeneity of the lesions, which may be suggestive of initial chromosomal modifications. Expression of the genetic changes transmitted at birth could increase predisposition towards endometriosis. Bleeding, oxidative stress, body radiation and dioxins are regarded as additional factors for activation of this process.

The most common symptoms of endometriosis are painful sexual intercourse (deep dyspareunia), pain before and/or during menstruation Progression of the disease does not correlate with the aggravation of the symptoms and none of them are specific. As a result of the improper verification process, the patient may be unnecessarily treated for diseases that may mimic the symptoms associated with other chronic pain-related disorders, e.g., irritable bowel syndrome and pelvic inflammatory disease [5][6]. In addition, women with endometriosis experience a number of non-clinical symptoms that include depression, fatigue, and the feeling of isolation.

Laparoscopy, an invasive method of examination, preceded by a transvaginal ultrasound and pelvic magnetic resonance imaging (MRI), is still regarded as the gold standard in the diagnosis of endometriosis [6]. Therefore, it is hoped that development of non-invasive diagnostic tools, such as ‘biomarkers’, could significantly reduce the time taken to diagnose endometriosis and enable monitoring the progression of the disease and the effectiveness of its treatment [5]. Replacing the invasive diagnostic methods with biomarkers which comply with the predetermined criteria, i.e., 94% sensitivity and 79% specificity, could be of considerable clinical usefulness [7][8].

This paper’s aim is to present and discuss the current status of biomarkers of endometriosis in the serum and urine. In our review, we focused on the main groups of markers which are: glycoproteins, growth factors, peptides, immunological markers, markers of oxidative stress, microRNAs (miRNAs) and long non-coding RNAs (lncRNAs) (Figure 1). 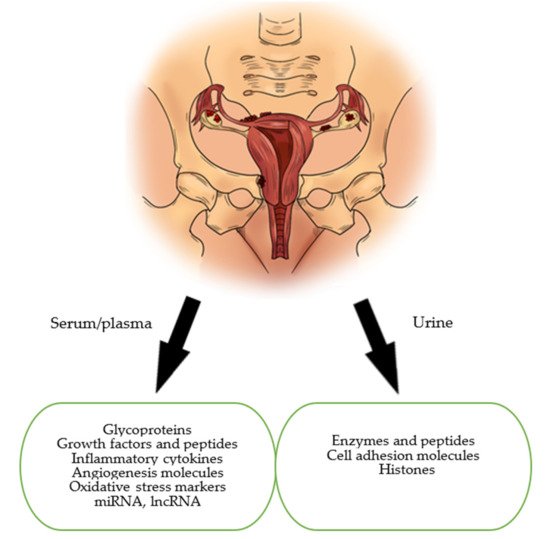 We conducted a comprehensive literature review using electronic databases such as Pubmed, Science Direct and Google Scholar, and took into account articles published in English between 1988 and April 2021. Keywords such as: “biomarker”, “endometriosis”, “glycoproteins”, “urocortin”, “immunological markers”, “oxidative stress”, “microRNA”, “lncRNA”, “urinary biomarkers”, and various combinations of the above were used. Publications were selected if they related to the studies investigating potential biomarkers detected in women with endometriosis. In addition, we manually reviewed the references for each article to find potentially missed studies.

The formation of reactive oxygen species (ROS) is a physiological process regulated by antioxidant defense mechanisms. Its significant role has been demonstrated in the inflammatory response of many diseases, including endometriosis [8]. It seems that as a result of retrograde menstruation, the endometrial cells and desquamated menstrual cells migrate into the peritoneal cavity, thereby inducing a chronic inflammatory response. This stimulates proinflammatory cytokines to activate immune cells such as granulocytes and macrophages, which are known to be capable of producing ROS [9].

These markers were distinguished in a meta-analysis from the Cochrane database, with carbonyls, showing a sensitivity of 94% and specificity of 51% in the detection of endometriosis (cut-off point < 14.9 mM), as well as in thiols, and they were regarded as substances particularly useful in the detection of pelvic endometriosis, showing a sensitivity of 73% and a specificity of 80% (cut-off < 396.44 mM). took into account 19 studies investigating oxidative stress markers in endometriosis. According to the analysis, the levels of glutathione peroxidase and superoxide dismutase significantly decreased in the severe stage of endometriosis, while the levels of lipid peroxide increased together with the severity of the disease [10]. However, other studies have shown that there is no correlation between endometriosis and the presence of oxidative stress markers [11].

Due to the multitude of factors regulating the level of oxidative stress, researchers emphasize the necessity for conducting further scientific studies to investigate if it is possible to use oxidative stress markers as diagnostic tests for endometriosis [8][12].

Its main function is the regulation of gene expression, it also affects processes of proliferation, differentiation, growth and apoptosis. MiRNAs are regulatory molecules that control expression of many genes and play key roles in many biological processes [13]. However, dysregulation of miRNA has been associated with many diseases, including endometriosis. MiRNA has brought a new perspective to the field of serum markers and become the subject of many research papers [14][15].

Anastasiu et al. [18] as well as Bjorkman and Taylor [17] indicate the miR-200 family as a promising marker of endometriosis. The miR-200 family includes miR-200a, miR-200b and miR-141. Scientific studies have shown a reduced expression of miRNAs in a group of patients with endometriosis, and the studies cited by Anastasiu et al., are characterized by a sensitivity of 84.4% and s specificity of 66.7% [18][17].

In 2020, Moustafa et al., selected six miRNAs: miR-125b, miR-150, miR-342, 451a, miR-3613, Let-7b [19]. Regardless of the studied group’s diversity when it comes to the disease progression, menstrual cycle phase, different racial demographics and the presence of hormonal treatment, the obtained results showed a significant increase in the levels of miR-125b, miR-150, miR-342, 451a as well as a significant decrease in the levels of miR-3613 and Let-7b in patients with endometriosis. In addition, the authors observed differences in miRNAs for different stages of the disease; they also noticed that the phase of the menstrual cycle and hormone treatment had no effect on the measured values. One of the most important conclusions of this research is that endometriosis can be distinguished from other gynecological pathologies on the basis of miRNAs [19].

lncRNAs, a member of the RNA family, is considered as a marker of endometriosis. lncRNAs are molecules longer than 200 nucleotides which, even though they do not code for proteins, can regulate gene expression directly or indirectly by affecting the expression of miRNAs [20]. whose levels showed a significant dysregulation in the group of patients with endometriosis. Researchers also identified the lncRNA molecule TC0101441 whose increased level correlated with infertility, chronic pelvic pain, and recurrence of the disease [18].

MiRNAs as well as lncRNAs are very attractive diagnostic markers due to their lower complexity, tissue specificity, lack of known post-translational modifications and stability in blood, urine or tissues [21]. Researchers have summarized their studies on miRNA with a conclusion that it is an endometriosis marker with an average value of sensitivity of 86% and specificity of 88%, while in the case of lncRNA the sensitivity was 89.7% and specificity was 73.2% [22][23]. Although the results are promising, research into miRNA and lncRNA remains a new field of study and requires confirmation and further investigation [18][15][22].

According to the currently available scientific knowledge, biomarkers for endometriosis can also be detected in urine. Great advantages of using a urinary test in the diagnosis of endometriosis include its low cost, non-invasiveness and the fact that a urine sample can be collected by the patient herself. However, the reliability of laboratory techniques and changing levels of the urinary biomarker during the menstrual cycle are limitations of the test.

With the use of proteomic techniques such as MALDI-TOF MS (matrix-assisted laser desorption/ionization mass spectrometry (MALDI MS) and time-of-flight analyzer (TOF)), different peptide markers were described in the urine of women with endometriosis and compared with the controls. The preovulatory peptide mass of 1767.1 showed a sensitivity of 75% and a specificity of 85%. The luteal peptide mass of 1824.3 These results are promising but require further validation in large populations presenting all stages of endometriosis.

Proestling et al. [26] investigated the usefulness of cell adhesion molecules such as sVCAM-1, sICAM-1, E-selectin and P-selectin as urinary biomarkers in the diagnosis of endometriosis. However, they found no significant differences in their urinary levels between women with and without endometriosis.

More
© Text is available under the terms and conditions of the Creative Commons Attribution (CC BY) license (http://creativecommons.org/licenses/by/4.0/)
Upload a video for this entry
Information
Subjects: Cell Biology
Contributor MDPI registered users' name will be linked to their SciProfiles pages. To register with us, please refer to https://encyclopedia.pub/register :
Zaneta Kimber-Trojnar
View Times: 37
Revisions: 2 times (View History)
Update Time: 19 Jul 2021
Table of Contents
1000/1000
Hot Most Recent