Submitted Successfully!
Thank you for your contribution! You can also upload a video entry related to this topic through the link below:
https://encyclopedia.pub/user/video_add?id=12071
Check Note
2000/2000
Multiple endocrine neoplasia type 1
Edit
This entry is adapted from 10.3390/ijms22147352

Multiple endocrine neoplasia type 1 (MEN1) is a rare autosomal dominant inherited multiple cancer syndrome of neuroendocrine tissues. Tumors are caused by an inherited germinal heterozygote inactivating mutation of the MEN1 tumor suppressor gene, followed by a somatic loss of heterozygosity (LOH) of the MEN1 gene in target neuroendocrine cells, mainly at parathyroids, pancreas islets, and anterior pituitary. Over 1500 different germline and somatic mutations of the MEN1 gene have been identified, but the syndrome is completely missing a direct genotype-phenotype correlation, thus supporting the hypothesis that exogenous and endogenous factors, other than MEN1 specific mutation, are involved in MEN1 tumorigenesis and definition of individual clinical phenotype.

Multiple endocrine neoplasia type 1 (MEN1) is a rare autosomal dominant inherited cancer syndrome that causes the development of multiple endocrine and non-endocrine tumors in a single patient [1][2]. The main affected organs are parathyroid glands, anterior pituitary, and the neuroendocrine cells of the gastro-entero-pancreatic tract. Morbidity and mortality of the disease are related to hormone over-secretion by endocrine functioning tumors, leading to the development of specific syndromes, and/or to the malignant progression of silent tumors, such as non-functioning neuroendocrine neoplasms of the pancreas and the thymus.
Medical therapies of MEN1 aim to control hormone over-secretion and tumor growth. Surgery is the main treatment employed for parathyroid adenomas and gastro-entero-pancreatic neuroendocrine tumors (GEP-NETs) [3]. No therapeutic intervention is definitively resolutive; given the genetic nature of the syndrome and the asynchronous development of tumors, MEN1 patients have a high prevalence of post-operative tumor recurrences, both in the parathyroids and the gastro-entero-pancreatic tract [4]. Therefore, there is a strong need for novel therapies acting at the molecular level and able to prevent tumors in the target neuroendocrine cells. The comprehension of molecular mechanisms underlying MEN1 tumorigenesis is fundamental to identify possible targets for the design of novel therapies [2].
In 1997, the causative gene, MEN1, was identified at the 11q13 locus [5]. The MEN1 gene is a classic tumor suppressor gene: The first inactivating heterozygote mutation is inherited by the affected parent (first hit), while the second copy of the gene is somatically lost in target neuroendocrine cells (second hit), mainly by a large deletion at the 11q13 locus or, more rarely, by a second intragenic loss-of-function mutation (loss of heterozygosity; LOH) [6][7]. The MEN1 gene encodes menin, a nuclear protein which exerts a wide spectrum of key activities, such as control of cell cycle and apoptosis, regulation of gene transcription and chromatin structure, and DNA repair [8]. Loss of both wild type MEN1 copies, resulting in loss of menin functions, appears to be the trigger of tumor initiation in MEN1 target neuroendocrine cells. However, the absence of a complete genotype-phenotype correlation and the different tumor manifestations between carriers of the same MEN1 mutation (even homozygote twins) suggest that other factors concur to cause MEN1 individual tumorigenesis. Epigenetic factors are the main suspected co-actors in driving tumor development and progression in MEN1 target neuroendocrine cells [9]. Alterations in the normal epigenetic regulation of gene transcription (histone modification and/or DNA methylation), following the loss of wild type menin activity, have been demonstrated to play an important role in the progression of MEN1 pancreatic neuroendocrine tumors [10].
Among epigenetic regulators of gene expression, microRNAs (miRNAs) have recently been shown to be involved in the development of various human malignancies, either acting directly as oncogenes (oncomiRs) or inhibiting the expression of tumor suppressor genes [11]. These molecules are non-coding small RNAs that normally negatively regulate gene expression by directly binding the 3′UTR of their target mRNAs [12][13][14]. Through the activity of tissue- and cell-specific miRNAs, the organism regulates the expression of numerous genes, in a spatial and temporal way, granting the correct functionality of various and important biological processes [15][16]. Alterations of expression and/or activity of one or more miRNAs can lead to disease development, including cancer. A role of miRNAs has been demonstrated in the initiation of various human malignancies [17][18][19] and in development of metastases [20][21].
In the last two decades, tissue-specific altered activity and/or expression of miRNAs have been suggested as possible modulators of MEN1 tumorigenesis [22][23][24][25], acting synergically with the MEN1 mutation, indicating the miR-24 as a possible effector of tumor development.

2. The Autoregulatory Network between miR-24, MEN1, and Menin: A Possible Effector of MEN1 Tumorigenesis

miR-24 is encoded by two separated chromosomal locations: one gene cluster located on chromosome 9q22, which includes miR-23b, miR-27b, and miR-24-1; and a second gene cluster located on chromosome 19p13, which includes miR-23a, miR-27a, and miR-24-2 [26]. The two miR-24 mature isoforms are identical in nucleotide sequencing, regardless of the different chromosomal origin.
Using Miranda, Target Scan, and Pictar Vert prediction software, Luzi et al. predicted the 599-605 nt position of the 832 nt-3′UTR of MEN1 mRNA as a direct target of miR-24-1 [27]. The seed site of miR-24-1, which binds to MEN1 mRNA 3′UTR, is highly conserved in humans, rats, mice, chickens, and dogs. The direct targeting of MEN1 mRNA was demonstrated in vitro for the first time in 2012 by Luzi et al. [27] in the BON1 cells, a human cell line derived from a lymph node metastasis of a serotonin-secreting pancreatic neuroendocrine tumor [28], via luciferase report assays. Authors showed that the induced over-expression of miR-24-1, through the transfection of pri-miR-24, inhibited the expression of menin protein, while the silencing of the endogenous miR-24-1, through the transfection of a specific 2′-O-methyl-RNA miR-24-1 antisense, resulted in an increased expression of menin, suggesting the existence of a direct negative feedback loop between miR-24-1 and menin, which could have a role in MEN1 tumorigenesis.
Later, in 2016, the same research group [29] demonstrated in BON1 cells that, in addition to the negative feedback loop between miR-24-1, MEN1 mRNA, and menin, there was also a feedforward loop in which menin protein directly binds to the pri-miR-24-1 (the primary mRNA precursor of miR-24-1), promoting the DROSHA-mediated processing to pre-miR-24-1 and, thus, the biogenesis of mature miR-24-1. Moreover, the specific siRNA-induced silencing of menin expression in BON1 cells resulted in a complete suppression of pri-miR-24-1 expression, indicating an essential and direct role of menin in miR-24-1 synthesis, that is exerted by acting both at the transcriptional and at the post-transcriptional modification levels of the miR-24-1 synthesis. Conversely, when an overexpression of menin is induced in BON1 cells, this leads to an increased expression of mature miR-24-1. Authors showed that menin specifically binds to pri-miR-24-1, but not to pri-miR-24-2, and that the silencing of menin expression had no effect on the pri-miR-24-2 expression and the processing to pre-miR-24-2.
The proposed autoregulatory network between miR-24-1, MEN1 mRNA, and menin is shown in Figure 1. 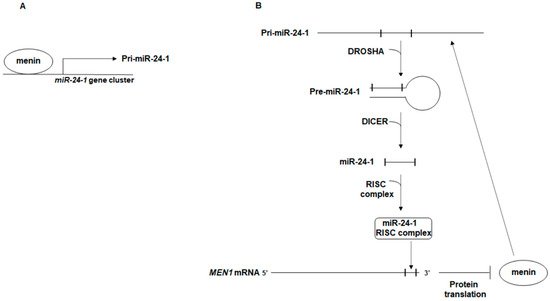 Figure 1. Schematic representation of the autoregulatory network between miR-24-1, MEN1 mRNA, and menin. (A) menin binds the upstream region of the miR-24-1-encoding gene cluster on chromosome 9, promoting the transcription of pri-miR-24-1; (B) menin directly interacts with the primary transcript of miR-24-1, pri-miR-24-1, facilitating the DROSHA-mediated processing to pre-miR-24-1, in a positive feedforward loop in which menin promotes the maturation of the repressor of its own expression, miR-24-1. Mature miR-24-1, together with the RISC complex, binds the 3′ UTR of MEN1 mRNA blocking translation of menin.
The regulatory network between miR-24, MEN1, and menin was demonstrated also in other species, than humans, in vitro and in vivo [30][31][32]. Interestingly, Gao et al. [30] demonstrated, both by Target Scan algorithm-based prediction and by an in vitro study in neonatal rat cardiac myocytes, that miR-24 targets the CDNK1B mRNA, blocking translation of the encoded p27kip1 protein, a negative regulator of cell cycle, resulting in a decreased G0/G1 arrest and in cell hypertrophy. Inactivating mutations of the CDNK1B tumor suppressor gene are responsible for the development of multiple endocrine neoplasia type 4 (MEN4), a clinical phenocopy of MEN1 [33]. Therefore, miR-24 could also have a role in MEN4 tumorigenesis.
Table 1. Molecular effects of miR-24 parathyroid glands and endocrine pancreas, and possible roles in MEN1 tumorigenesis.
Menin has been found to exert its tumor suppression activity by blocking cell hyperplasia in tissues other than those commonly affected by MEN1 syndrome, such as prostate, breast, lung, liver, and stomach [35].
Using the A549 cells (a continuous cell line derived from a human adenocarcinoma of the alveolar basal epithelium of the lungs) and the NCI-H446 cells (a cell line derived from a human small-cell lung tumor), Pan et al. [36] also confirmed the interaction of miR-24 with the 3′UTR of MEN1 mRNA and the miR-24-mediated significant silencing of menin expression in lung cancer.
The induced overexpression of miR-24 in A549 cells inhibited menin expression and upregulated SMAD3 and cyclin D1, stimulating cell proliferation and, at the same time, increased expression of Bcl-2 and inhibited expression of Bax, resulting in the inhibition of cell apoptosis [36]. Conversely, the induced silencing of endogenous miR-24 increased menin expression and downregulated SMAD3 and cyclin D1, inhibiting cell growth, and, at the same time, inhibited Bcl-2 expression and promoted Bax expression, allowing cell apoptosis [36]. In addition, the induced overexpression of miR-24, in both A549 and NCI-H446 cell lines, upregulated SMAD3 and MMP2 and significantly enhanced cell migration and invasion, while downregulation of miR-24 decreased the expression of both SMAD3 and MMP2, preventing cell migration and invasion. Taken together, these data indicate miR-24 as an oncogenic effector in lung cancer cells, acting as promoter of both cell proliferation and metastatic spread.
In the same study, the analysis of surgical specimens from human lung cancer showed a higher expression of miR-24, and a mirrored lower expression of menin, in tumors with respect to the adjacent healthy tissues. miR-24 expression inversely correlated with tumor size and patient overall survival, while patients with a higher menin expression showed a longer survival rate [36].
Bronchopulmonary carcinoids of the neuroendocrine cells of the bronchial epithelium arise in approximately 5–8% of MEN1 patients [37]. Despite the different cytological origin with respect to lung cancers studied by Pan et al. [36], an involvement of the miR-24-MEN1 mRNA-menin network in the tumorigenesis of these carcinoids in MEN1 syndrome cannot be excluded.
Although menin has been found to regulate cell proliferation in hepatocellular carcinoma [38], the exact role of menin in liver carcinogenesis has not yet been widely studied, and the liver is not a site of primary tumor development in MEN1 syndrome, but only metastases from pancreas and duodenal MEN1-related neuroendocrine tumors. Ehrlich et al. [35] studied the miR-24-MEN1 mRNA-menin network in six human cell lines of intrahepatic and extrahepatic cholangiocarcinoma (CCA), a biliary epithelial adenocarcinoma whose cells adopt a neuroendocrine-like phenotype during their proliferation. Both MEN1 mRNA and menin expression resulted significantly decreased in all six CCA-derived cell lines compared to a human immortalized, non-malignant, cholangiocyte cell line (H69). A further-induced silencing of menin in tumoral cells increased cell growth, while the induced menin overexpression reduced the cell proliferation rate together with a decreased cell migration and invasion.

The miR-24-driven post-transcriptional inhibition of menin synthesis, in parathyroid cells and pancreas beta islets, could represent an intermediate epigenetic step guiding the MEN1 tumorigenesis. menin has been demonstrated to have a role in the maintenance of genome stability and DNA repair, protecting cells from DNA damage [39][40]. At the same time, the epigenetic silencing of wild type menin by miR-24 promotes cell proliferation and exposes cells to DNA damage, which could result in deletion at the 11q13 locus or mutation of the second copy of the MEN1 gene, favoring the somatic MEN1 LOH, which represents a common hallmark of MEN1 cancers in parathyroids and endocrine pancreas.
In light of this, it is conceivable that targeting and silencing the expression of miR-24 at this intermediate, still reversible, step, before the occurrence of the genetic, irreversible, MEN1 LOH, could restore expression and activity of wild type menin and block neoplastic initiation and progression, representing a promising innovative tool for preventing tumor development and progression in MEN1 patients [41].