Submitted Successfully!
Thank you for your contribution! You can also upload a video entry related to this topic through the link below:
https://encyclopedia.pub/user/video_add?id=1207
Check Note
2000/2000
Neutrophils
Edit
Upload a video
This entry is adapted from 10.3390/ijms21124558

Neutrophils are the most abundant circulating and first-responding innate myeloid cells
and have so far been underestimated in the context of multiple sclerosis (MS). MS is the most
frequent, immune-mediated, inflammatory disease of the central nervous system. MS is treatable
but not curable and its cause(s) and pathogenesis remain elusive. The involvement of neutrophils
in MS pathogenesis has been suggested by the use of preclinical animal disease models, as well
as on the basis of patient sample analysis. In this review, we provide an overview of the possible
mechanisms and functions by which neutrophils may contribute to the development and pathology of
MS. Neutrophils display a broad variety of eector functions enabling disease pathogenesis, including
(1) the release of inflammatory mediators and enzymes, such as interleukin-1, myeloperoxidase and
various proteinases, (2) destruction and phagocytosis of myelin (as debris), (3) release of neutrophil
extracellular traps, (4) production of reactive oxygen species, (5) breakdown of the blood–brain barrier
and (6) generation and presentation of autoantigens. An important question relates to the issue of
whether neutrophils exhibit a predominantly proinflammatory function or are also implicated in the
resolution of chronic inflammatory responses in MS.

Neutrophilic granulocytes are the most abundant cell population (70%) in the circulating leukocyte fraction in the human species. They belong to the polymorphonuclear cell family together with basophils and eosinophils because of their multi-lobular nucleus [1,2]. After their formation in the bone marrow from a common myeloid progenitor cell, they circulate in the bloodstream for 7–10 h, after which they migrate into tissues and exert their functions. These innate immune cells are often seen as ‘first responder cells’ during acute inflammation. They are highly motile cells and were assumed to display a short lifespan of about one day. The latter survival time is currently disputed because neutrophils could still be detected after 7 days under certain conditions [3,4]. Such refinement of detection may be limited to specific subpopulations of neutrophils and yields discussions about future immunophenotyping of neutrophil subsets (vide infra). Under physiological conditions, the majority of neutrophils are patrolling cells and just circulate through the body in resting state to avoid the release of their toxic, intracellular content.

2. The Role of Neutrophils

Activation of neutrophils requires two steps: (1) priming of neutrophils by bacterial products or cytokines/chemokines and (2) binding of activating signals to membrane receptors at the site of injury [5].
In response to an inflammatory stimulus, neutrophils are quickly activated through G-protein-coupled receptors (GPCRs) and migrate along four types of chemical gradients to the site of infection/injury/inflammation, which is called ‘chemotaxis’. These four chemotactic cues may be bacterial formyl peptides, complement molecules C3a and C5a, leukotrienes or chemotactic cytokines, dubbed chemokines [6]. The prototype of human neutrophil chemokine is granulocyte chemotactic protein-1, named interleukin-8, and later still renamed CXC chemokine ligand (CXCL)-8 [7]. CXCL8 uses two CXC chemokine receptors (CXCR): CXCR1 and CXCR2 (vide infra). Upon arrival at the target sites, neutrophils are activated and execute their effector functions, mainly intended for the elimination of pathogens. By the release of cytokines and chemokines, neutrophils amplify the inflammatory cascade and attract other immune cells. Neutrophils can act as phagocytes and internalize microorganisms or particles, foremost when these are coated with opsonins, such as antibodies or complement molecules. To kill the engulfed pathogens, reactive oxygen species (ROS) are produced and released into the phagosome. Neutrophils also secrete granules which are classified in one system (on the basis of biosynthesis during the maturation of neutrophils in the bone marrow) in the following three categories: primary or azurophilic granules (containing, for instance, myeloperoxidase (MPO) and the serine proteinases neutrophil elastase (NE), cathepsin G and proteinase 3), secondary or specific granules (containing, e.g., lysozyme, lactoferrin and neutrophil gelatinase-associated lipocalin) and tertiary or gelatinase B granules. In addition to granules, neutrophils also contain smaller secretory vesicles with alkaline phosphatase, cytokines/chemokines and CD35, the latter of which is first released upon activation [8]. The release of this antimicrobial content is called degranulation, in which the order is reciprocal with the synthesis in the bone marrow, namely secretory vesicles and tertiary granules released first and primary granules last. A recently discovered function of neutrophils is the formation of neutrophil extracellular traps (NETs), which includes the release of fiber-like structures of DNA [9]. These NETs trap and eliminate microbes independently of phagocytosis and may also serve as a physical barrier to prevent spreading of pathogens. Neutrophils also act as immunomodulators by promoting the maturation of professional antigen presenting cells (APCs) [10]. Coculturing of neutrophils and dendritic cells (DCs) leads to activation of DCs. Activation is dependent on cell-to-cell contact and is accompanied by an upregulated expression of CD40, CD86 and human leukocyte antigen-DR isotype (HLA-DR) [11]. Another recent proposal is that neutrophils themselves act as alternative APCs and in this way participate in adaptive immunity [12,13]. It is believed that neutrophils influence adaptive immunity through the transport of antigens to lymph nodes (LNs), presentation of antigens to T cells and interaction with APCs. This function implies that such neutrophils may leave the site of antigen capture, enter the lymph circulation and transport and present antigens, together being processes in need of cumulated time intervals which presumably supersede the supposed life-span of only one day [14]. Bone marrow-derived murine neutrophils are able to transform into a DC-like population after treatment with granulocyte-macrophage colony-stimulating factor (GM-CSF), called ‘neutrophil-DC hybrids’ (Figure 1). These DC-neutrophil hybrid cells express markers of both neutrophils (Ly6G, CXCR2) and DCs (major histocompatibility complex class II (MHC II), CD80/86) and develop some APC-like properties. They thus acquire DC characteristics while maintaining intrinsic neutrophil features such as phagocytosis and NET release [15,16]. Regarding the origin of the hybrid population, Geng et al. showed that they originate from immature band cells that either progress into mature polymorphonuclear cells or transdifferentiate into neutrophil–DC hybrids. These authors also demonstrate that the hybrid population is able to present bacterial antigens to CD4+ T cells and assist in rapid bacterial clearance in vivo [15,16]. Also, in mouse models for inflammatory diseases, MHC II and CD86 expressing neutrophils, that are able to present antigens to naive CD4+ T cells, were isolated [17]. These neutrophil-DC hybrids originate from transdifferentiated neutrophils after extravasation at inflammatory sites. So, both immature and mature murine neutrophils are able to form hybrids in vitro, as well as in vivo. Regarding the required stimulus to acquire antigen presenting capacities of murine neutrophils, Radsak et al. reported the expression of MHC II and costimulatory molecules after coculturing of neutrophils with T cells and antigens [18]. Furthermore, Abi Abdallah et al. stressed the need for cell-cell-dependent contact between T cells and neutrophils, as separation by a transwell system abrogated the T cell-induced expression of MHC II on neutrophils [19]. These neutrophils are able to process and present antigens to CD4+ T cells, induce their proliferation and stimulate differentiation of T helper (Th) 1 and Th17 cells in vitro. 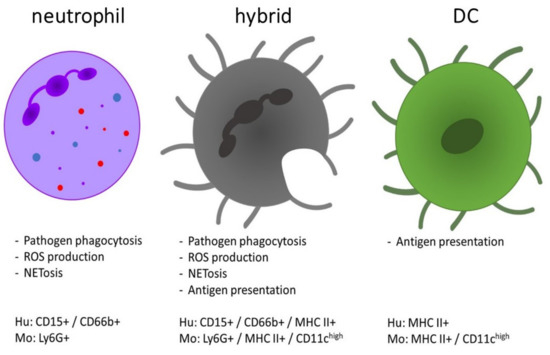 Figure 1. Comparison of the functions and phenotype of neutrophils, dendritic cells (DCs) and the neutrophil-DC hybrids. The hybrid population is characterized by combined functions of both DCs (antigen presentation and T cell activation) and neutrophils (phagocytic clearance of pathogens, etc.). The expression profile of hybrid cells is defined as a mixed phenotype with expression of markers from both neutrophils and DCs [10,11]. They morphologically resemble DCs, whereas their nucleus was detected as both an oval shape or as multi-lobular [25]. Hu = human, Mo = mouse.
Resting human neutrophils under physiological conditions do not express markers typically found on APCs and are not able to induce proliferation of naive T cells. However, human peripheral blood neutrophils start to express DC markers (e.g., MHC II, CD80, CD83, CD86 and CC chemokine receptor 6) after in vitro activation by GM-CSF, interferon (IFN)-γ and interleukin (IL)-3. This generates neutrophil–DC hybrids with characteristics of APCs while maintaining typical features of neutrophils. It was shown that mature as well as immature human neutrophils are able to transdifferentiate into hybrids [13,20,21,22]. These APC-like neutrophils are not only an in vitro phenomenon, as they are also detected in patient samples (e.g., synovial fluid from patients with rheumatoid arthritis and blood from patients with Wegener’s granulomatosis), where the expression of MHC II, CD80, CD83 and CD86 on neutrophils is upregulated [13,22,23,24]. Vono et al. used freshly isolated human neutrophils to show their ability of presenting antigens in vivo to antigen-specific CD4+ T cells [14]. They found that the supernatant from antigen-specific, activated T cells induces the expression of MHC II and costimulatory molecules on neutrophils, which are then able to present antigens via interaction with T cells. Radsak et al. demonstrated that unstimulated human neutrophils are able to cause proliferation of antigen-specific T cells after co-culturing with T cells and their antigens [18]. This ability is dependent on MHC II, as blocking MHC II on neutrophils inhibits their antigen presenting capacity.
Lok et al. investigated the presence of neutrophils in LNs under physiological conditions [4]. Using flow cytometry and intravital imaging analysis, they were able to detect the presence of both human and murine neutrophils in LNs under homeostatic, unstimulated conditions. These cells enter the LNs via high endothelial venules and then circulate through the lymphatics. LN-neutrophils show a phenotype distinct from neutrophils derived from the peripheral blood. More specifically, LN-neutrophils display higher expression of CXCR4, MHC II and costimulatory molecules. They carry immunoglobulin G (IgG)-opsonized cargo, such as immune complexes, and are mostly found within the interfollicular region of the LNs, which is the area where CD4+ T cells are located for their antigen searches. Also, with the use of confocal microscopy, interactions are revealed between neutrophils and DCs in the LN cortex. Finally, when stimulated ex vivo with immune complexes, neutrophils upregulate MHC II and are able to activate CD4+ T cells. Altogether, this makes neutrophils ideal candidates to execute homeostatic immune surveillance, as well as to reactivate (autoreactive) T cells, by delivering circulating antigens (such as immune complexes or autoantigens) to the LN, where they can stimulate the adaptive immune cells.
© Text is available under the terms and conditions of the Creative Commons Attribution (CC BY) license; additional terms may apply. By using this site, you agree to the Terms and Conditions and Privacy Policy.
Upload a video for this entry
Information
Subjects: Immunology
Contributor MDPI registered users' name will be linked to their SciProfiles pages. To register with us, please refer to https://encyclopedia.pub/register :
Mirre De Bondt
View Times: 369
Revision: 1 time (View History)
Update Time: 29 Jun 2020
Table of Contents
1000/1000
Hot Most Recent