Submitted Successfully!
Thank you for your contribution! You can also upload a video entry related to this topic through the link below:
https://encyclopedia.pub/user/video_add?id=12061
Check Note
2000/2000
Extraction from Cyanidium caldarium
Edit
Upload a video
This entry is adapted from 10.3390/microorganisms9071452

Phycocyanin is a blue colored pigment, synthesized by several species of cyanobacteria and red algae. Besides the application as a food-colorant, the pigmented protein is of high interest as a pharmaceutically and nutritionally valuable compound. Since cyanobacteria-derived phycocyanin is thermolabile, red algae that are adapted to high temperatures are an interesting source for phycocyanin extraction.

The bright blue colour of the pigment phycocyanin is of great interest as a natural colorant in food industry. Its good water solubility especially allows for the processing of extracted phycocyanin as a food colorant for ice cream, jelly or chewing gum [1]. Since commonly used colorants, such as Brilliant Blue FCF (E133) and Patent Blue V (E131) have been recently discussed as originators of allergic reactions [2][3], the interest in natural and sustainable alternatives is growing. Beyond the safe application of naturally derived phycocyanin as a food colorant, the pigment has been shown to have beneficial effects on health [4]. Phycocyanin acts as an anti-inflammatory agent and an antioxidant [5][6], and is therefore considered a potential drug for cancer treatment [7].
Most commonly, cyanobacteria such as Arthrospira sp. are used as phycocyanin source due to their widespread availability and cost-efficient cultivation [8]. The outstanding preference of Cyanidium caldarium to live in extreme habitats such as hot, acidic springs [9] qualify this red algae as an interesting alternative-producer of phycocyanin since colonization with contaminating microorganisms is unlikely due to the harsh culture conditions [10]. Furthermore, the pigments produced by extremophile red algae might possess different characteristics compared to the pigments exhibited by cyanobacteria. Red algae such as Cyanidium caldarium produce these accessory pigments in order to broaden the absorption spectrum of light used for photosynthesis. These pigments are characterised as phycobiliproteins [11] that can generally be divided into three groups: the reddish coloured phycoerythrin (PE), and the both blueish coloured C-phycocyanin (C-PC) and allophycocyanin (APC), all of them emitting a characteristic fluorescence after excitation with visible light [12][13]. C-phycocyanin is a holoprotein, which consists of two subunits [14]. The chromophore, phycocyanobilin, is attached to the apoprotein by a cysteinyl-linkage [15]. The fluorescence is quenched by denaturation of the protein or changes in the linkage between chromophore and apoprotein, which makes the stability of phycocyanin light and heat sensitive [16]. The small, spherical cells of Cyanidium caldarium possess a dense cell wall [17]. A successful extraction strategy needs to meet two challenges: the small size and the integrity of cell wall require harsh disintegration processes, while the sensitiveness of phycocyanin limits the applied energy with regard to the resulting high temperature. Different extraction methods have been described. For freeze-thaw-cycles, various protocols have been established [14][18][19]. Safaei et al. [18] examined different combinations of freeze-thaw-cycles for Limnothrix sp., indicating a three-times repeated freezing at −70 °C achieving the highest yields of phycocyanin. Major disadvantages of this method are the long treatment time, the high energy demand, and the number of freeze-thaw cycles strongly depending on the microorganism strain [19]. Other protocols are based on mechanical disruption by homogenisers [20][21]. Alternative methods include phycocyanin extraction after sonication of algae suspension [14] and the application of pulsed electric fields (PEF) for enhanced extraction of pigments from microalgae, e.g., chlorophyll, phycocyanin, and phycoerythrin [22][23][24]. The ultrasonic disintegration mainly derives from the formation of cavitation bubbles and the associated mechanical disruption of the cell walls. The most effective disruption frequency is dependent on the mechanical properties of the cell wall (such as thickness, composition and density) and specific for different algae species [25]. Generally, homogenisation or sonication often suffer from heat development, which might degrade thermolabile compounds. PEF, as a non-thermal technique for cell disintegration, charges the cell membrane, which eventually leads to pore formation and thus, increased permeability of cell membranes. This process of electroporation is utilised for the transfer of substances into a cell, as well as for increasing extraction yields of natural compounds from cells [26][27][28]. The increased extraction yields only occurred, if the treated samples were allowed to incubate after PEF exposure for at least two hours [24][29].
Spark discharge treatment of algae suspensions has been shown to be an effective, but gentle tool for the disintegration of microalgae and with regard to pigment and protein extraction [30][31][32]. In general, spark discharges generated in aqueous solution provide ultraviolet radiation and shockwaves besides a variety of chemical reactive species, e.g., hydrogen peroxide, hydrogen, oxygen, superoxide or hydroxyl radicals [33]. Importantly, the effect of successful cell wall disintegration is mainly based on the generation of shockwaves with a pressure of approx. 500 MPa, which usually exceeds the tensile strength of most if not all microalgae [32]. With the applied parameters, the bulk temperature did not exceed 27 °C, which are optimal extraction conditions for heat sensitive pigments.
The aim of this study was to determine the efficiency of spark discharges compared to standard treatment protocols, e.g., freeze-thaw cycles, pulsed electric fields, and sonication. The results were evaluated in respect of scaling-up potential. To keep the comparability of all applied techniques, the total energy input was kept constant, except for freeze-thaw cycles. To examine the extracted phycocyanin for protein modifications caused by the disintegration method, protein analysis via LC-MS was performed for selected extracts.

By increasing the volume (from 1.5 mL to 75 mL) of algae suspension conducted to freeze-thaw-cycles at once, the supernatant after centrifugation remained colourless although an order of magnitude more energy (111,900 J) was dissipated. The phycocyanin content estimated by photometric determination did not differ from untreated control (0.2 mg/g dw) and was calculated with 0.5 mg/g dw (see Figure 1). The evaluation of the purified extract by fluorescence spectroscopy supported this finding. The characteristic fluorescence maximum after excitation at 620 nm was absent in the samples (data not shown). Still, the elevated absorption of freeze-thaw samples at 280 nm indicated that proteins were extracted from the algae. 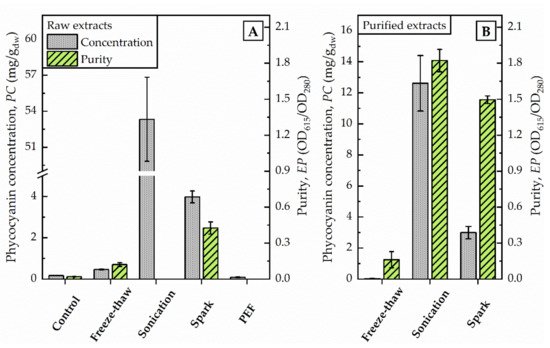 Figure 1. Photometric determination of raw extracts (A) and selected purified extracts (B) after different disintegration methods. Phycocyanin concentration (PC) and purity (EP) were calculated as given in Equations (1) and (2) regarding to Bennett and Bogorad, and Abalde et al., respectively. PC is given in mg/g dried weight (dw) of biomass (100 g/L).

The disintegration by sonication was divided into two different treatment schemes. First, the total energy (11,880 J) of the sonication process was applied at once, leading to a rise in temperature of the algae suspension above 45 °C. In order to avoid possible damages caused by the high temperature, the sonication process was paused after each 30 s in a second treatment scheme, allowing the algae suspension to cool down intermittently to 20 °C. By this process, the maximum temperature did not exceed 27 °C, comparable to the temperatures obtained after disintegration by spark discharges.

The supernatant after centrifugation was of a dark blue colour. The photometric determination of phycocyanin content indicated a concentration in the raw extract of 53 mg/g dw (see Figure 1). The maximum absorbance was detected at 618 nm. Precipitation with ammonium chloride revealed a green-blue pellet. The purified extract was of a bright blue colour. Analysis of fluorescence spectra shows a fluorescence maximum at 650 nm after excitation with 620 nm (see Figure 2.) 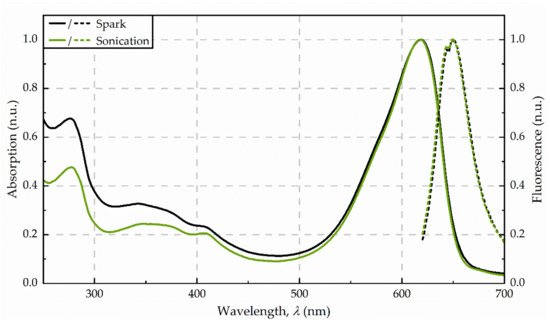 Figure 2. Absorbance (solid line) and fluorescence (dotted line) spectra from the purified extracts, obtained for disintegration by spark discharges and sonication, respectively. Spectra were averaged from three replicates and normalized to 620 nm (absorption) as well as 650 nm (fluorescence).

Limiting the rise of temperature by pausing of sonication process led to a marginal release of phycocyanin (data not shown). The supernatant after centrifugation was of a dark green colour without visible traces of blue. Since the high amount of impurities inhibited the purification, no further evaluation of phycocyanin characteristics were examined.

The application of pulsed electric fields with a total energy of 11,880 J did not foster the release of phycocyanin from algae cells. The phycocyanin concentration in the raw extract corresponded to values of untreated controls, as illustrated in Figure 1. The photometric determination of phycocyanin concentration was calculated with 0.09 mg/g dw and is in good agreement with the visual evaluation. The raw extract appeared colourless without traces of blue colour.

After the exposure of the algae cells to spark discharges in a continuous flow-through system, the raw extract was of an intense blue colour. The photometric determination of phycocyanin concentration showed a distinct deviation from untreated control. Compared to the phycocyanin concentration in the raw extract after sonication, the concentration was 13-times lower (≙ 4 mg/g dw) after disintegration by spark discharges. Detailed analysis of absorbance and fluorescence spectra of the purified extract revealed an absorbance maximum at 619 nm and a fluorescence maximum at 650.5 nm (see Figure 2). In the purified extract, the ratio of phycocyanin yield was four times lower, when comparing spark discharge (3 mg/g dw) to sonication (13 mg/g dw).

For a more detailed study of the extracted proteins, a protein analysis via LC-MS was carried out for selected extracts. Both blue coloured extracts (spark discharge and sonication) were compared to the extract obtained by freeze-thaw cycles, which served as reference method. Independent of the disintegration method, different phycobiliproteins were found in all samples. Besides allophycocyanin (APC) and C-phycocyanin (C-PC) protein subunits alpha and beta, lower amounts of R-phycocyanin (R-PC) and phycoerythrin (PE) were identified. Interestingly, the amount of APC was lower compared to C-PC for all types of disintegration. Particularly, after disintegration by spark discharges, no APC alpha chain was found in the samples (see Figure 3). 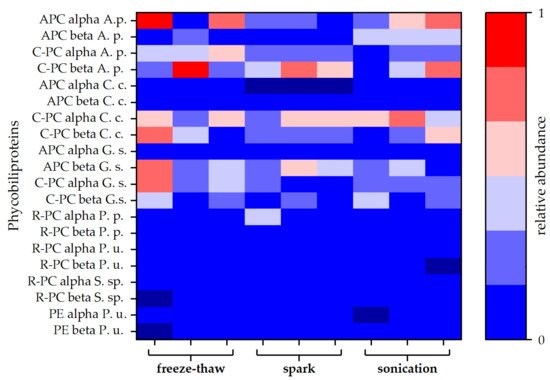 Figure 3. Relative abundances of different types of phycobiliproteins. Each disintegration method was performed in triplicate. Abundances are given as averages of duplicates obtained by MS-protein analysis. Allophycocyanin (APC), C-phycocyanin (C-PC), R-phycocyanin (R-PC), and phycoerythrin (PE) sequences of different species were obtained from the Uniprot® database. Protein composition of the attained extracts was compared to phycobiliproteins of Arthrospira platensis (A. s.), Cyanidium caldarium (C. c.), Galdieria sulphuraria (G. s.), Porphyridium purpureum (P. p.), Polysiphonia urceolata (P. u.), and Synechococcus sp. (S. sp.).
In a second approach, the proteins were examined with regard to non-enzymatic modifications in the amino acid chain of the peptides. The analysis revealed that the relative rate of modifications of target proteins is the highest for the extract, obtained by freeze-thaw cycles. The proteins extracted with the help of spark discharges underwent the least modifications (see Figure 4A). The most frequent detected modification for all disintegration variants was M +15.99, which is associated with the oxidation of methionine (see Figure 4B). 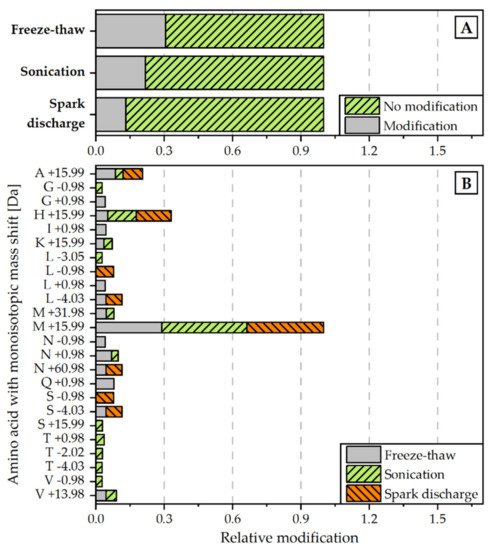 Disintegration by spark discharges, as well as disintegration by sonication facilitated the extraction of phycocyanin from the red algae Cyanidium caldarium. Compared to other disintegration techniques (freeze-thaw cycles and PEF), continuous sonication in particular showed to be the most effective extraction method with regard to absolute yield of phycocyanin (53 mg/g dw), although the extraction yield was lower (4 mg/g dw) in comparison to sonication, a positive effect of spark discharge disintegration towards the integrity of extracted proteins was revealed by protein analysis. Here, only minor modifications were detected, while a similar effect to such an extent was not found for sonication. Further investigations may address whether the high yield of phycobiliproteins after continuous sonication is transferrable to larger scale experiments. Adaptations of the spark discharge settings may lead to an equivalent yield with focus on a high-purity phycocyanin, saving time and material for purification.

More
© Text is available under the terms and conditions of the Creative Commons Attribution (CC BY) license (http://creativecommons.org/licenses/by/4.0/)
Upload a video for this entry
Information
Subjects: Microbiology
Contributor MDPI registered users' name will be linked to their SciProfiles pages. To register with us, please refer to https://encyclopedia.pub/register :
Marie-Christine Sommer
View Times: 40
Revisions: 2 times (View History)
Update Time: 14 Jul 2021
Table of Contents
1000/1000
Hot Most Recent