Submitted Successfully!
Thank you for your contribution! You can also upload a video entry related to this topic through the link below:
https://encyclopedia.pub/user/video_add?id=12021
Check Note
2000/2000
Amygdala
Edit
This entry is adapted from 10.3390/biom11060823

The amygdala is one of the areas in the brain involved in the development of PTSD as the starting point for the process of activation of the hypothalamo–pituitary axis and the cascade of physiological responses to acute stress. An appropriate response to acute stress is a vital adaptive mechanism, but its prolongation causes various biopsychosocial (previously, psychosomatic) disorders. Chronic stress leads to higher expression of CRH/CRF in the CE and BLA, which has an anxiogenic effect.

The amygdala is formed by several nuclei and cortical fields located bilaterally in the anteromedial part of temporal lobes of the cerebrum (Figure 1). There are several concepts about what the term amygdala should encompass as well as whether it is a single structure or a set of extensions from different parts of the brain [1]. 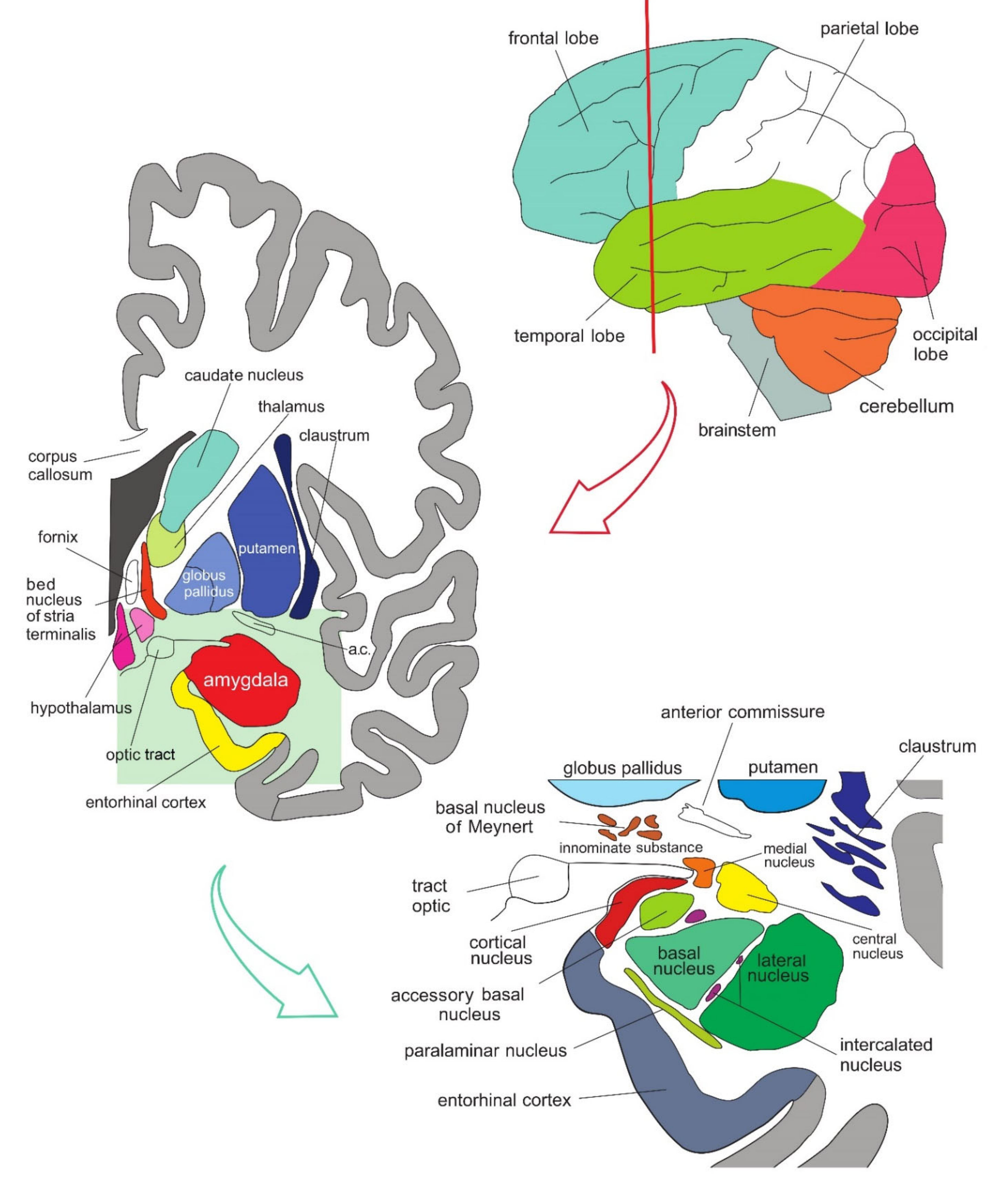 Figure 1. Simplified representation of the structure and location of the amygdala. The upper part of the schematic shows the human brain when viewed from the lateral side, where the brainstem, cerebellum, and four lobes of the cerebrum can be seen. The middle part of the schematic shows the structures present on the coronal plane through the temporal lobe of the cerebrum on which the position of the amygdala can be observed. The lower part of the schematic shows an enlarged amygdala with its individual nuclei. a.c.—anterior commissure. See text for details.
In primates, the amygdala is usually divided into 13 nuclei and cortical fields [2][3][4][5]. Most agree that the amygdala can be divided into several groups of nuclei, as some nuclei show certain anatomical and functional similarities. The deep or basolateral group contains the lateral, basal, accessory basal and the paralaminar nucleus. The superficial or corticomedial group includes the cortical nucleus in contact with the relatively thin periamygdaloid paleocortex, the central and medial nuclei as two functionally similar nuclei, and the nucleus of the lateral olfactory tract, which some authors do not include as a part of the amygdala. The BNST might be added to this group although most do not consider it a part of the amygdala. It should be noted that the central nucleus (CE) has a more specific functional role and connections, so it can be observed separately. Additional nuclei include the anterior amygdaloid area, the amygdalohippocampal area, and groups of inserted neuronal clusters (Figure 2). 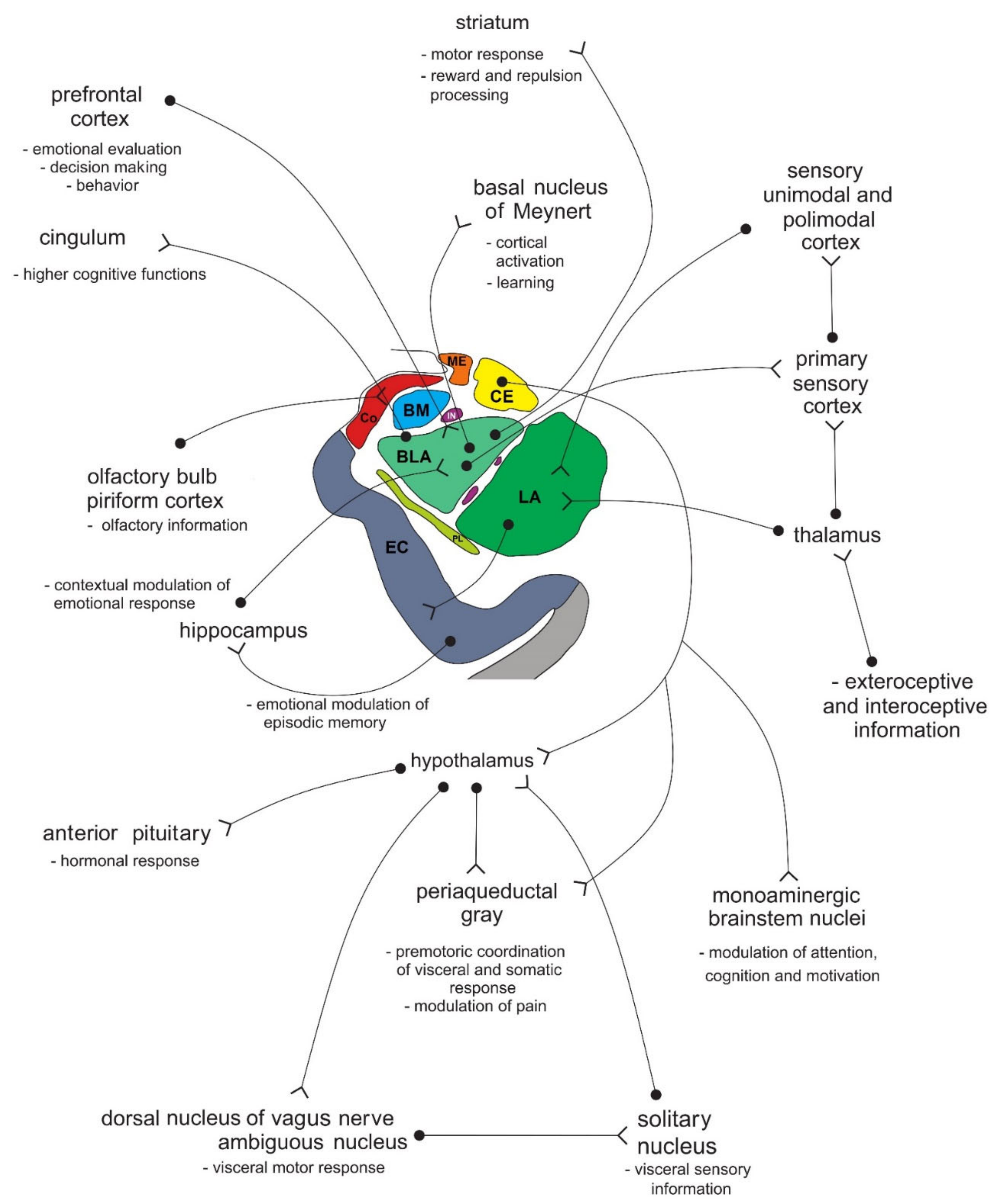 2. The Role of the Amygdala in Sensation Seeking, Psychosis, Major Depression and Other Psychiatric Disorders

More
© Text is available under the terms and conditions of the Creative Commons Attribution (CC BY) license (http://creativecommons.org/licenses/by/4.0/)
Upload a video for this entry
Information
Subjects: Biology
Contributor MDPI registered users' name will be linked to their SciProfiles pages. To register with us, please refer to https://encyclopedia.pub/register :
Goran Simic
View Times: 628
Revisions: 2 times (View History)
Update Time: 13 Jul 2021
Table of Contents
1000/1000
Hot Most Recent