Submitted Successfully!
Thank you for your contribution! You can also upload a video entry related to this topic through the link below:
https://encyclopedia.pub/user/video_add?id=12007
Check Note
2000/2000
Eight Promising Radionuclides for TAT
Edit
Upload a video
This entry is adapted from 10.3390/pharmaceutics13060906

Among all existing radionuclides, only a few are of interest for therapeutic applications and more specifically for targeted alpha therapy (TAT). Actinium-225, astatine-211, bismuth-212, bismuth-213, lead-212, radium-223, terbium-149 and thorium-227 are considered as the most suitable. Despite common general features, they all have their own physical characteristics that make them singular and so promising for TAT. These radionuclides were largely studied over the last two decades, leading to a better knowledge of their production process and chemical behavior,
allowing for an increasing number of biological evaluations. The aim of this review is to summarize the main properties of these eight chosen radionuclides. An overview from their availability to the resulting clinical studies, by way of chemical design and preclinical studies is discussed.

Actinium is the first element of the actinide series, and among its 32 known isotopes, only 228Ac and 227Ac occur naturally as part of the decay chains of 232Th and 235U, respectively. 227Ac is the most abundant isotope, exhibiting a long half-life of 21.7 years and decaying mainly through β− emissions. 228Ac is also a β− emitter and is extremely rare. 225Ac is part of the 237Np decay chain which has disappeared in Nature but was recreated artificially. 225Ac exhibits features that have made it a promising candidate in nuclear medicine applications. It has a half-life of 9.9 days. Its disintegration follows a six-step decay chain to reach stable nuclei, that generates multiple alpha particles contributing to increasing its potential cytotoxicity in comparison with other α-emitters (Figure 1). Besides, with the γ-emission of some of its daughter nuclides such as 221Fr or 213Bi, it provides the possibility to trace it after injection. Nevertheless, it has to be mentioned that these radiations make the reaction monitoring difficult and the secular equilibrium has to be reached before one can measure a reliable radiochemical yield (at least 6 h). 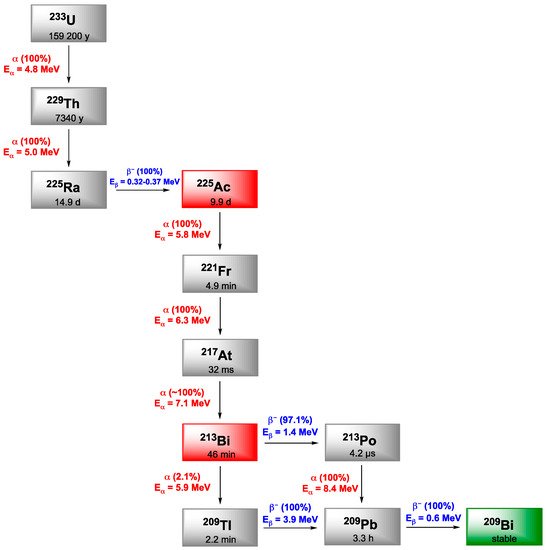 Astatine is often reported as the rarest natural element on Earth, and exhibits 32 isotopes, none of them being stable. Even if most of these isotopes are α-emitters, only 211At exhibits suitable physical properties for TRT. It decays with a half-life of 7.21 h and following a dual branch process resulting in the emission of 5.9 and 7.5 MeV α particles as well as X-rays (77–92 keV). Whatever the branch, one alpha particle is emitted, qualifying 211At as a 100% α-emitter. It is interesting to notice that potential radiotoxicity of 211At daughters’ is negligible; especially because of the short half-life of 211Po and the very low amount of 207Bi generated. Finally, the emission of X-rays in the adapted energy range of common γ-detectors, offers the possibility of monitoring by single photon emission computed tomography (SPECT) imaging (Figure 3). 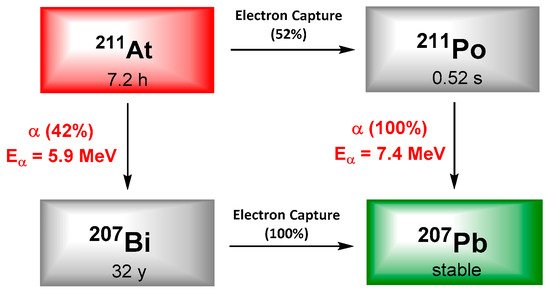 Figure 3. Simplified decay scheme of 211At.

Bismuth belongs to group 15 of periodic classification and exhibits 35 isotopes, most of them having short half-lives (from ns to a few minutes) and only one is considered stable, 209Bi, due to a very long half-life of 1.9 × 1019 years. Among all these isotopes, only 212Bi and 213Bi have demonstrated promising features for investigation in targeted alpha therapy.
213Bi, a daughter isotope of 225Ac, decays by α (2.2%) and β− (97.8%) emission with a half-life of 46 min. It decays to the stable 209Bi via successive decays resulting in β− emissions (0.6–2 MeV) and the emission of one α particle (5.9–8.4 MeV). The total emitted energy of 213Bi can be attributed at 90% to α-particles and can explain its more pronounced cytotoxicity. In addition, the emission of gamma rays with an energy of 440 keV offers the possibility of imaging by SPECT (Figure 1).

212Bi arises from the decay sequence of 228Th (1.9 y) and results in 208Tl (3.1 min) via 36% of α-emission and by 64% to 212Po (0.3 µs) after β−-emission, both daughters leading to stable 208Pb. 208Tl decay occurs through high energy γ-emission (2.6 MeV), which necessitates adapted protection for all the handling phases. Like 213Bi, 212Bi exhibits a short half-life (60.6 min) which requires rapid targeting as well as efficient production of radiolabeled carrier molecules. On the other hand, in vivo release issues regarding 212Bi daughter radionuclides are negligible due to the short decay chain of 212Bi to stable 209Bi and the short half-lives of the daughters induced (Figure 6). 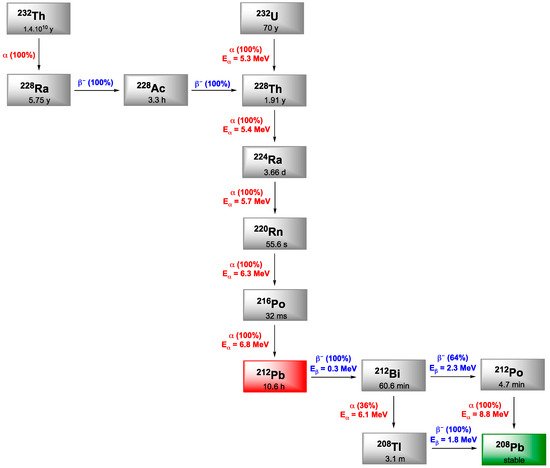 Lead is often presented as the heaviest stable element in the periodic classification and exhibits four stable isotopes: 204Pb, 206Pb, 207Pb and 208Pb. Among its 38 reported isotopes, five would have appropriate properties for detection (203Pb, 210Pb, 211Pb, 212Pb, 214Pb) but only two are suitable for clinical application, in imaging with 203Pb (SPECT) and therapy with 212Pb. 212Pb is a β-emitter but its interest in TAT comes from the fact that its first daughter is 212Bi (Figure 6). The short half-life of 212Bi can be overcome by using 212Pb in vivo generator of 212Bi. 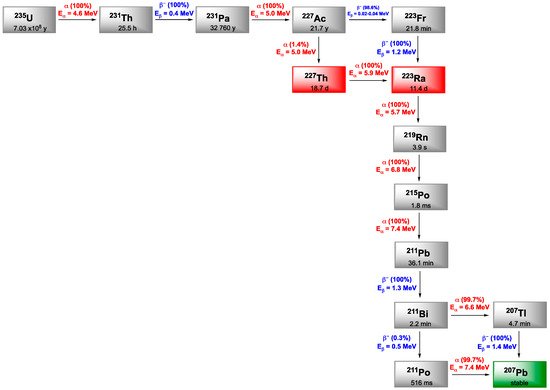 Terbium is a rare-earth metal with only one stable isotope, 159Tb, whose physico-chemical properties are interesting for the development of fluorescent complexes. This element is also described as the “Swiss army knife of nuclear medicine” because among its thirty-six isotopes reported, four of them exhibit suitable properties to cover all modalities in nuclear medicine: 152Tb (17.5h, Eβ+ = 1.08 MeV) for positron emission tomography (PET), 155Tb (5.32d, Eγ = 86.55 keV) for SPECT and Auger electron therapy, 149Tb (4.1h, Eα = 3.97 MeV) and 161Tb(6.89 d, Eβ- = 0.154 MeV) for therapy. 149Tb decays to several radiolanthanides by emission of low energy α (3.97 MeV, 17%), electron capture (76%), and β+ particles emission (730 keV, 7%), making it interesting for TAT and a possible follow-up by PET. It has to be mentioned that the potential radiotoxicity of the daughter isotopes (long half-life) generated is still to be determined (Figure 9).

Thorium is a metal of the actinide series whose isotopes are all radioactive. Natural thorium exists almost exclusively as 232Th and to a lesser extend 230Th. Thorium isotopes exhibit mostly very short (few μs or ms) or long (few years) half-lives and only two exhibit a potential for TAT: 226Th (30.6 min) and 227Th (18.7 days). Nevertheless, due to a difficult production process (from 230U decay), availability of 226Th remains presently anecdotal with respect to the amount needed for research, and 227Th emerged as the most promising candidate.
© Text is available under the terms and conditions of the Creative Commons Attribution (CC BY) license (http://creativecommons.org/licenses/by/4.0/)
Upload a video for this entry
Information
Subjects: Pharmacology & Pharmacy
Contributor MDPI registered users' name will be linked to their SciProfiles pages. To register with us, please refer to https://encyclopedia.pub/register :
Romain Eychenne
View Times: 75
Revision: 1 times (View History)
Update Time: 13 Jul 2021
Table of Contents
1000/1000
Hot Most Recent