Submitted Successfully!
Thank you for your contribution! You can also upload a video entry related to this topic through the link below:
https://encyclopedia.pub/user/video_add?id=11957
Check Note
2000/2000
Chronic Nonbacterial Osteomyelitis in Children
Edit
This entry is adapted from 10.3390/children8070551

Chronic nonbacterial osteomyelitis (CNO) is an auto-inflammatory bone disorder with a wide spectrum of clinical manifestations, from unifocal to multifocal lesions. When it manifests with multifocal lesions, it is also referred to as chronic recurrent multifocal osteomyelitis (CRMO). CNO/CRMO can affect all age groups, with the pediatric population being the most common. Patients may present with systemic inflammation, but there is no pathognomonic laboratory finding. Magnetic resonance imaging (MRI) is the gold standard radiological tool for diagnosis. In the absence of validated diagnostic criteria, CNO/CRMO remains an exclusion diagnosis. Bone biopsy does not show a specific disease pattern, but it may be necessary in unifocal or atypical cases to differentiate it from malignancy or infection. First-line treatments are non-steroidal anti-inflammatory drugs (NSAIDs), while bisphosphonates or TNF-α blockers can be used in refractory cases. The disease course is unpredictable, and uncontrolled lesions can complicate with bone fractures and deformations, underlying the importance of long-term follow-up in these patients.

Chronic nonbacterial osteomyelitis (CNO) is an auto-inflammatory bone disorder, first described in 1972 by Giedion et al. [1] as a subacute and chronic symmetrical osteomyelitis. CNO is an umbrella term that includes conditions manifesting with a wide range of clinical manifestations, from single to multiple bone lesions [2]. Several other definitions have been used over time to refer to this heterogeneous disorder, such as chronic recurrent multifocal osteomyelitis (CRMO), synovitis acne pustulosis hyperostosis osteomyelitis (SAPHO) syndrome, and nonbacterial osteomyelitis [3].
As CNO is a rare disease, and presents with a wide spectrum of manifestations, the diagnosis can be challenging. In the following sections, clinical presentation, laboratory and radiological investigations, pathophysiology, and treatment options will be discussed.

The incidence of CNO varies across geographic areas, and this is thought to be due to increased awareness of the disease in the regions with higher incidence, rather than ethnic or environmental factors [4]. The median age at diagnosis in pediatric patients is 10 years, with most cases reported between 8 and 13 years [4][5][6][7][8]. In European cohorts, females seem more likely to be affected, with a female-to-male ratio of 2:1 [5][6][7][8][9][10], while in Latin American and Indian series a male prevalence is reported [11][12]. Diagnostic delay is common in pediatric CNO, with a mean interval of 12 months between symptom onset and diagnosis in most pediatric studies [4][6][8][13], possibly related to the rareness of the disease, the discrete findings on examination, and the absence of pathognomonic laboratory studies.

CNO usually presents with insidious recurrent bone pain in one or multiples sites [5][6][14]. Pain intensity can be variable, and mostly reported in the morning and during the night, causing sleep disturbance [6][15]. This can lead to a mistaken diagnosis of growing pain and consequently delay the diagnosis of CNO [16]. Pain can be associated with local swelling [11][17] and limb impairment [4][11]. Inflammation may occur at any site of the skeleton, but the metaphysis of long bones is the area most frequently involved in children, as it is reported in 33–66% of cases [4][6][8][17]. Osteomyelitis of the sternum, clavicle, or jaw is suggestive of CNO [6], whereas the skull is almost never affected [18][19]. Spinal involvement is seen in up to a third of cases (20–46%) [10][20] and it is an important prognostic factor, since it can be complicated by vertebral fracture [20]. When multifocal, lesions are asymmetric in approximately 60% of cases [6][15]. Involvement of the clavicle remains unifocal throughout the disease course in about half of the patients in Bhat et al.’s cohort [10]. Other clinical features can be associated with the osteomyelitis in CNO patients; arthritis develops in approximately 40% of the cases, either at onset or later [11][15][17]. Systemic features such as fever or fatigue are reported in 17–20% of patients [3][15].
CNO is associated with other chronic inflammatory conditions in up to 20% of cases, including juvenile idiopathic arthritis, spondylarthritis, inflammatory bowel disease, and dermatological manifestations (psoriasis, pustulosis palmaris et plantaris, pyoderma gangrenosum, severe acne, Sweet syndrome) [6][8].

The percentage of patients presenting with systemic inflammation at CNO onset varies significantly. In particular, the proportion of increased inflammatory markers reported, such as C-reactive protein (CRP) and erythrocyte sedimentation rate (ESR), ranges between 19 and 90% in different studies [4][6][7][8][9][10][14][15][17][19][20][21][22][23]. It is interesting to note that ESR and CRP levels do not seem to be predictive of a particular course of the disease [4][5]. Beck et al. show a correlation between the ESR and the number of radiological lesions, but not with the number of symptomatic sites, suggesting that asymptomatic lesions may be a contributing factor to systemic inflammation [5]. In patients with CNO/CRMO, leukocytosis has been described in 14–20% of cases [17]. The elevation of inflammatory markers in CNO/CRMO is usually moderate, and it resolves during inactive periods [5]. As per other inflammatory biomarkers, ferritin is commonly within normal ranges, even though its levels were reported as significantly higher in the initial examination versus follow-up of CNO/CRMO patients by Beck et al. [5]. No relevant elevation of IgD, IgG, IgA, or IgM has been shown [8].
HLA-B27 positivity is reported in a small percentage of CNO/CRMO patients: 7.5% in the large pediatric registry of Eurofever [8], 7% in a large national French cohort of 178 patients [6], and 6% in a Chilean series [11]. This observation, together with the axial involvement in some patients, led several authors to suspect an association between spondylarthritis and CRMO [24][25]. Nevertheless, in all studies, presence of HLA-B27 does not correlate with the presence of arthritis or axial skeleton involvement [11], nor with a more severe disease course [5].
Recently, some authors have discussed the role of serum cytokines and chemokines, such as S100A8/A9, in differentiating CNO from other conditions such as leukemia, infections, IBD, and healthy control [26][27]. More studies are required to evaluate the use of these biomarkers in the process of diagnosis, treatment strategy, and follow-up in CNO patients.

Radiological assessment is particularly important in diagnostic evaluation since CNO/CRMO is a diagnosis of exclusion, and its early symptoms can overlap with other conditions (e.g., bone tumors). Different radiological tools can be used for the diagnosis, but whole-body magnetic resonance imaging (MRI) remains the gold standard [4][8][13].
MRI offers a more sensitive method in detecting inflamed sites, with the advantages of avoiding radiation exposure [8][13] and evaluating both disease activity and possible skeletal complications. Furthermore, lesions can be asymptomatic in 47–64% of patients [4][10], in particular in the early stages of the disease. This underlines the importance of imaging for an early detection of silent lesions and their complications, especially spinal involvement (fracture, vertebra plana) [28]. The most frequent radiologic findings described on MRI are bone marrow edema [13] and osteolytic lesions [4][9][17][28]. Long bones metaphyses, especially the distal tibial metaphysis, are the most involved sites in all studies [2][4][10][19].
Standardizing imaging characteristics in CNO patients is important in order to develop a grading system and facilitate disease assessment. Different tools have been described in the past years (RINBO, CROMRIS) using mainly the following characteristics: bone edema and soft tissue inflammation extent, evaluation of periosteal reaction, hyperostosis, growth plate damage, and vertebral compression [29][30][31]. None of these grading systems have been validated.
X-ray is often the first exploratory tool used in the process of bone pain investigation in children. X-ray abnormalities, such as modifications in bone metaphyses and osteolytic lesions, are described in the literature in more than 50% of CNO/CRMO patients [4][10][17]. However, these are not specific changes [9] and are usually not detected in the early stages of the disease [14]. Therefore, X-ray seems helpful as a first-line tool but MRI is preferred for its sensitivity and lack of radiation [17].
A computer tomography (CT) scan is more sensitive than X-ray. However, taking into account its considerable radiation exposure, it is mostly considered an alternative diagnostic tool in case MRI is not available [13]. Similarly, scintigraphy can also be used as a second-choice imaging in case of non-availability of MRI.

Surgical bone biopsy may be necessary to exclude other diseases such as malignancy or infection, in particular in unifocal and/or atypical locations, in cases of earlier onset (less than 2 years) or atypical evolution under treatment [13][14][32]. When biopsy is indicated, common CNO histological findings are not pathognomonic, and include edema, hyperemia, infiltration of lymphocytes and plasma cells compatible with non-specific chronic inflammation, marrow fibrosis, and osteonecrosis [11][17][32].

Different teams have proposed diagnostic criteria for CNO [32][33], but these have not been validated in prospective studies.
To date, CNO/CRMO remains a diagnosis of exclusion. The evidence of multifocal involvement can contribute in differentiating CNO/CRMO from other diseases such as bacterial osteomyelitis. However, in unifocal or atypical cases, a bone biopsy may be required [32].
A proposed schematic decisional algorithm for patients with unifocal/multifocal osteoarticular pain is presented in Figure 1. The most common differential diagnoses that have to be considered are presented in Table 1. 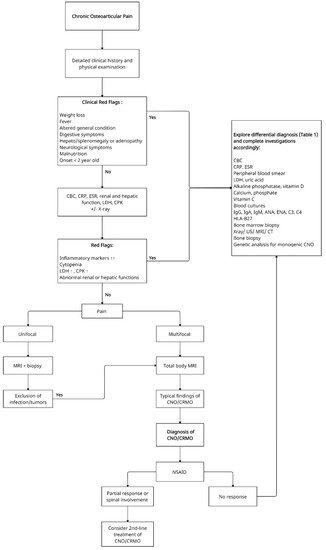 More
© Text is available under the terms and conditions of the Creative Commons Attribution (CC BY) license (http://creativecommons.org/licenses/by/4.0/)
Upload a video for this entry
Information
Subjects: Pathology
Contributor MDPI registered users' name will be linked to their SciProfiles pages. To register with us, please refer to https://encyclopedia.pub/register :
Aikaterini Koryllou
View Times: 45
Revisions: 2 times (View History)
Update Time: 12 Jul 2021
Table of Contents
1000/1000
Hot Most Recent