Submitted Successfully!
Thank you for your contribution! You can also upload a video entry related to this topic through the link below:
https://encyclopedia.pub/user/video_add?id=11880
Check Note
2000/2000
Nanotechnology-facilitated Bacterial Therapy
Edit
Upload a video
This entry is adapted from 10.3390/pharmaceutics13070940

In recent years, advancing nanotechnology has extended bacterial therapies to a higher level through tailoring bacteria on a nanoscale, such as bacteria-derived nanovesicles and bacterial membrane-coated nanoparticles, or endowing bacteria with abilities to serve as drug carriers, photosensitizers, and sonosensitizers.

Malignant tumors are the second most common threat to human life and health [1]. Countless efforts have been dedicated to countering tumor growth and rapidly progressing associated diseases. Currently, conventional clinical interventions like chemotherapy still face problems such as off-target toxicity, limited therapeutic agent enrichment in target lesions, and drug resistance despite being the first-line clinical treatment against cancer [2]. Certain bacteria exhibit promising properties in handling these defects. In 1813, Vautier found that those suffering from cancer had their condition improved after the development of gas gangrene. The underlying therapeutic efficacy is mainly attributed to the ability to localize a hypoxic environment, toxin release, and immune activation using pathogenic bacteria [3]. In recent years, advancing nanotechnology has extended bacterial therapies to a higher level through tailoring bacteria on a nanoscale, such as bacteria-derived nanovesicles and bacterial membrane-coated nanoparticles, or endowing bacteria with abilities to serve as drug carriers, photosensitizers, and sonosensitizers (Figure 1). In this review, cancer hallmarks, current management regimens and their deficiencies are first introduced. Then, we elaborate on the history and therapeutic mechanisms of conventional bacterial therapy. Most importantly, we highlight recent advances in nanotechnology-facilitated bacterial therapy. The superiority of such hybrid nanoformulations, either performing as drug and gene delivery vectors or active pharmaceuticals themselves, is described in detail. Overall, rapidly advancing nanotechnology has facilitated bacterial therapy, unlocking a new stage in cancer treatment. 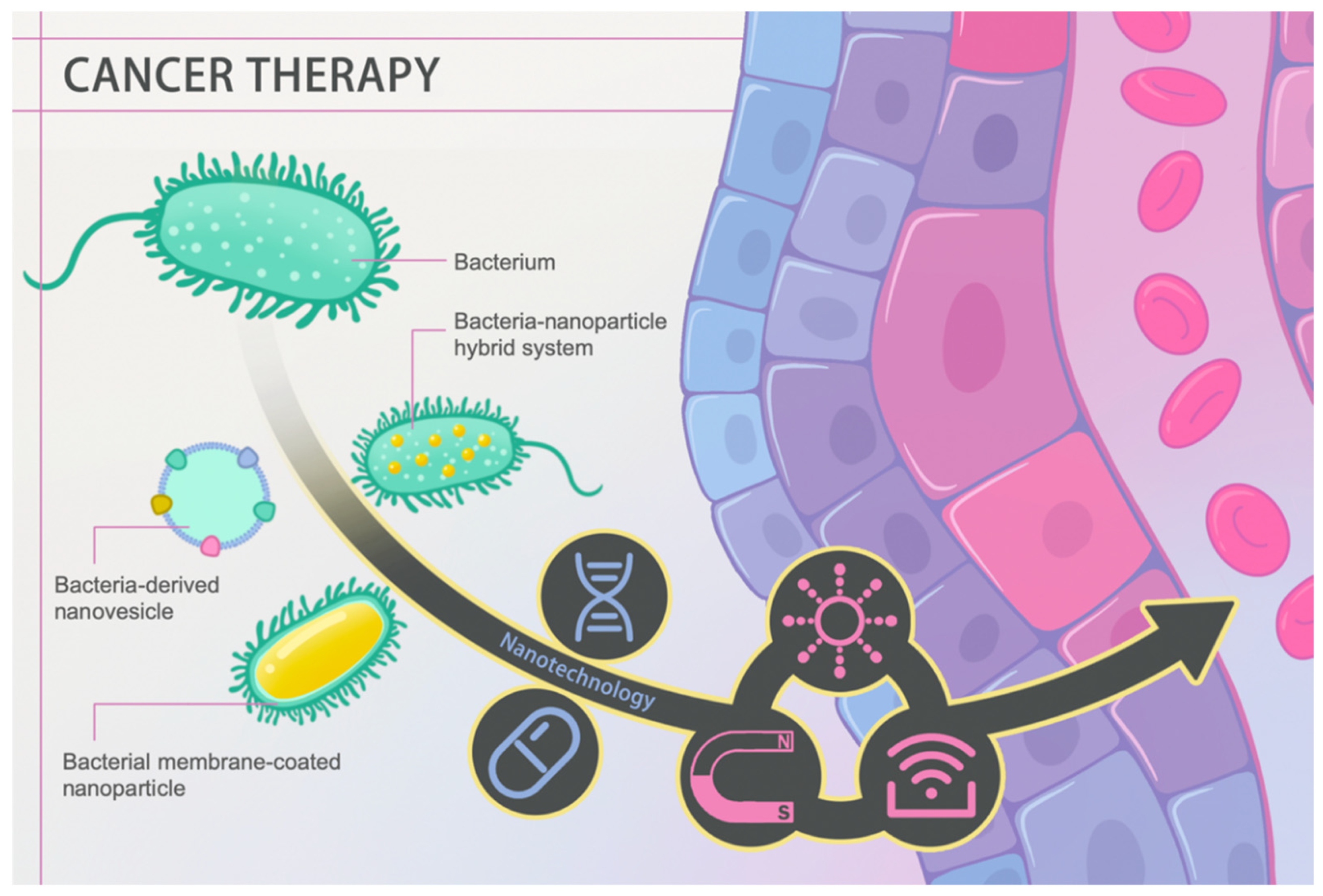 2. Bacteria, an Old Player against Cancer

Bacteria are some of the most notorious killers in human history. In the 14th century, the Black Death claimed millions of human lives, which was caused by the bacterium Yersinia pestis [4]. However, bacteria also contain promising antitumor properties beneath their ‘evil masks’. In this section, we elaborate on the history (Table 1) and therapeutic mechanisms of bacterial therapy. Bottlenecks confronted in clinical trials are also mentioned to acquire a comprehensive understanding of the current role of bacteria in cancer treatment at the same time.
Table 1. Timeline of several typical examples of bacteria use in cancer treatment.

Currently, two main mechanisms explain the tumor-targeting ability of bacteria, which are high hypoxia and immunosuppression in the tumor microenvironment. When some anaerobic bacteria, for example, Salmonella, were injected intravenously into mice, there was no significant difference in the amount of bacteria between the tumor and the liver at the beginning. Subsequently, the bacteria localized near the tumor proliferated due to a suitable hypoxic environment and immunosuppressed conditions [12]. In addition, those situated at normal tissues or in the body’s circulation were rapidly eliminated due to natural immune clearance [13].
In addition, interstitial fluid pressure (IFP) has been reported to be higher in tumor tissues due to blood vessel leakiness and poor lymphoid fluid drainage [14]. As a result, such increased tumor IFP hinders conventional therapeutic agents from entering deep tumor tissues, thus impacting their uptake by cancer cells. The flagellum of bacteria can well handle this predicament through active migration toward tumor tissues and even deeper into their necrotic core [15]. Other factors like the entrapment of bacteria in chaotic tumor vasculatures and chemotaxis toward compounds that derive from cancer tissues also contribute to their tumor-targeting ability [16][17][18].

The therapeutic mechanisms of bacteria can be classified into three groups: (1) swelling and apoptosis of tumor cells induced by bacterial invasion, (2) secretion of bacterial toxins, and (3) antitumor immune activation. First, bacteria can kill tumor cells by initiating autophagy or inducing cell apoptosis through infection and intracellular multiplications [19]. In addition, bacteria can secrete toxins which can activate downstream apoptotic pathways. For example, cytolysin A (ClyA) can trigger caspase-mediated cell death and form gaps in cell membranes [20]. Escherichia coli K-12 can secrete ClyA and inhibit tumor growth. Besides, nitric oxide (NO) correlates with tumor progression. A high concentration of NO has been reported to mediate cancer cell apoptosis and tumor regression [21]. However, under normal conditions, NO is converted to its nontoxic form NO3−. In this case, the NO generation enzyme produced by E. coli reoxidizes NO3− into NO to block cancer progression [22].
Apart from them, therapeutic effects rely on the antitumor immune responses to a large extent. Bacteria exhibit outstanding immune activation capability. For example, Salmonella can colonize macrophages and dendritic cells to induce the production of interleukin-1β (IL-1β) [23]. Salmonella infection can also lead to the upregulation of connexin 43 (Cx43) and the formation of functional gap junctions between dendritic cells and tumor cells [24]. Such junctions assist tumor-associated antigens being presented to T cells from dendritic cells, resulting in significant antitumor immune responses. In addition, pathogen-associated molecular patterns (PAMPs) show the capability to activate inflammatory responses and facilitate proinflammatory cytokine release which can contribute to cancer immunotherapy [25]. For example, lipopolysaccharide (LPS) can induce toll-like receptor 4 (TLR4) signal transduction and promote macrophage secretion of IL-1β [26]. Flagellin is also a potential stimulator of natural killer cells that can induce the production of interferon-γ [27][28].

We outlined the therapeutic roles of nanotechnology-facilitated bacteria-based drug and gene delivery systems. With the help of nanotechnology, such hybrid systems exhibit strong capabilities of delivering drugs and genetic information to targeted tumor sites at high specificity for precise subcellular locations. In addition, nanomaterials can serve as active pharmaceutic compounds by themselves or when hybridized with bacteria and bring additional therapeutic potential to bacterial therapy, including proven techniques such as photothermal or catalytic combinational treatment. As a result, such hybridization exhibits no noticeable impact on bacterial targeting of tumor tissues and exerts great synergistic therapeutic efficacy against cancer. On the other hand, the appropriate selection of bacteria is critical for improving drug-targeting ability. For example, Felfoul et al. conjugated drug-loaded liposomes to Magnetococcus marinus strain MC-1 [29]. As a result, up to 55% of the MC-1 cells penetrated hypoxic regions of HCT116 colorectal xenografts when injected near the tumor with the aid of external magnetic forces. Such hybrid drug delivery systems can significantly improve the therapeutic index of various small-molecule drugs in the tumor’s hypoxic regions. Therefore, the rational design of bacteria–nanoparticle hybrid systems is essential to achieve their full potential performance for treating cancer.
Despite great achievements and promising outlooks in this area, several critical issues must be solved before their possible translation into clinical use. Firstly, latent inflammation and toxicity induced by bacterial membrane components need to be well-managed to avoid severe systemic inflammation [30]. Secondly, therapeutic efficacy and replicability need to be verified carefully in trials. Many variables, such as the amounts of bacteria, nanoparticles, drugs, and genetic information, and the method of nanoparticle hybridization with bacteria must be carefully considered during the construction of such hybrid systems. Overall, nanotechnology has unlocked a new era for bacteria-based cancer therapy and will bring benefits to clinical cancer treatment in new, innovative ways.