Submitted Successfully!
Thank you for your contribution! You can also upload a video entry related to this topic through the link below:
https://encyclopedia.pub/user/video_add?id=11848
Check Note
2000/2000
Phospholipase A2 Drives Tumorigenesis
Edit
This entry is adapted from 10.3390/cells10061472

Phospholipids are suggested to drive tumorigenesis through their essential role in inflammation. Phospholipase A2 (PLA2) is a phospholipid metabolizing enzyme that releases free fatty acids, mostly arachidonic acid, and lysophospholipids, which contribute to the development of the tumor microenvironment (TME), promoting immune evasion, angiogenesis, tumor growth, and invasiveness. The mechanisms mediated by PLA2 are not fully understood, especially because an important inhibitory molecule, Annexin A1, is present in the TME but does not exert its action. Here, we will discuss how Annexin A1 in cancer does not inhibit PLA2 leading to both pro-inflammatory and pro-tumoral signaling pathways. Moreover, Annexin A1 promotes the release of cancer-derived exosomes, which also lead to the enrichment of PLA2 and COX-1 and COX-2 enzymes, contributing to TME formation.

Cancer incidence and mortality have been growing rapidly worldwide. According to the World Health Organization (WHO), in 2020, except for non-melanoma skin cancer, 18 million new cases of the disease and 9.8 million deaths were recorded worldwide, making cancer the second cause of death in the population. Carcinogenesis is a dynamic process in which transformed cells express different hallmarks during their evolution [1]. Hanahan and Weinberg proposed common and fundamental characteristics for the promotion and progression of tumors, which, despite being a unifying set of organizing principles, must be analyzed as closely related aspects that promote the transformation of normal cells and the stochastic advance of the disease [1][2]. The sustaining proliferative signaling is the main hallmark, once the homeostasis of the cell cycle is interrupted during tumorigenesis. The persistence of non-canonical stimuli, genomic instability, overexpression of receptors, recycling of markers, and epigenetic alterations are events responsible for conferring survival advantages and the selection of clones of malignant cells, which do not follow a fixed path that guarantees a highly heterogeneous environment [3][4].

However, malignant transformation requires the destabilization of multiple signals, which allows not only the survival of tumor cells but also their ability to progress and even to resist therapeutic strategies [5]. The evasion of growth suppression and cell death signals are also crucial in determining these phenotypes with the inactivation of tumor suppressor genes, imbalance in the repair mechanisms, and alterations in the dynamics of the telomeres. Associated with these characteristics, metabolic rewriting immune modulation and abetting microenvironment support continuous cell growth and proliferation. Finally, vascularization and activation of tissue invasion and metastasis establish the ability of these cells to invade surrounding tissue and seed distant sites, which defines an advanced and generally fatal stage of the disease [2][4].

Although the model of clonal evolution and/or selection framework mode proposed by Peter Nowell in 1976 [6] is widely used, it is important to consider that intratumoral heterogeneity also stems from branched evolution and a cooperative environment between different subclones and cell types [7][1]. In this scenario, the molecular make-up of cancer cells is different even at the same tumor site, showing the fundamental role played by the tumor microenvironment (TME) in the initiation and progression of the disease [7]. Abnormal lipid metabolism occurs both in tumor cells and in the TME contributing to the escape from immune system recognition. We will focus on how such interaction could promote the establishment of an inflammatory and immunosuppressive TME.

cPLA2 hydrolyzes mainly glycerophospholipids including phosphatidylcholines, phosphatidylethanolamines, and or AA in the sn-2 position, it has a catalytic effect dependent on Ca2+and its high molecular mass can vary between 61 and 114 kDa [4]. These enzymes are widely distributed in most types of human tissue and are responsible for different disturbances including allergic responses and inflammatory damage induced in lung and brain cancer models [5].

These enzymes are found in animal venoms, synovial fluid, and various mammalian tissues. These eicosanoids are directly involved in proliferation, survival, differentiation, and inflammation, besides contributing to the establishment and maintenance of important stages of tumor growth and metastasis [8][9]. Indeed, sPLA2can activate membrane receptors expressed on tumor cells triggering intracellular responses that promote cell growth, proliferation, and resistance to metabolic stress and apoptosis. Therefore, understanding the role of sPLA2in the molecular biology of cancer may contribute substantially to the development of additional strategies to control different tumors [8][10].

In fact, the importance of PLA2in cancer has been described with much effort devoted to depicting the role of sPLA2. Different isoforms of sPLA2exist and, among them, sPLA2-IIA is upregulated in the lung, prostate, colon, gastric, and breast cancers [11]. sPLA2-IIA has also been found to play an essential role in TME of prostate and lung cancer [12][13]. Increased levels of sPLA2 in the TME of prostate cancer patients correlates with a poor prognosis [11][14].

cPLA2and iPLA2also display important roles in cancer. In particular, the expression of cPLA2has been correlated with a worse prognosis in several types of cancer [15] and with angiogenesis in colorectal cancer [16]. According to Weiser-Evans and collaborators, deletion of cPLA2alters the TME in such a way that progression of lung cancer is inhibited through macrophage modulation [17]. Regarding iPLA2, some studies demonstrated its involvement in ovarian cancer [18][19] and a pro-tumoral role of extracellular and exosome-free iPLA2and cPLA2[20].

It has been described that PGE2 acts inhibiting NK cells and promoting the expansion of regulatory cells [21][22]. Indeed, it has been demonstrated that PGE2 is one of the major inducers of tolerogenic DCs [23][24] and of MDSC that inhibit the anti-tumor response [25][26]. In addition to this, PGE2 enhances the proliferation and function of Tregs by inducing the expression of the transcription factor, FOXP3, whose activity is necessary for the development of the immunosuppressive functions of Tregs [27]. On the other side, although little is known about the immunosuppressive activities of LPA, it seems that this molecule can inhibit the anti-tumor effector functions of CTLs [28] and that, its signaling pathway through

3. Annexin A1: An Endogenous PLA2 Inhibitor

It is well accepted that PLA2 is one of the major players in the establishment of an inflammatory environment and, consequently, it is crucially involved in tumorigenesis and tumor progression [8]. AnxA1 is a phospholipid-binding protein expressed in many tissues and cell types including leukocytes, lymphocytes, endothelial and epithelial cells [29]. AnxA1 is one of the mediators of the anti-inflammatory activity of glucocorticoids (GCs) [30], and exerts its anti-inflammatory activities by inhibiting PLA2in the cytoplasm [31]. AnxA1 also regulates different processes including membrane trafficking, proliferation, differentiation, and apoptosis [32][33].

AnxA1 can be found in its 37 kDa intact form that displays an anti-PLA2activity and in two cleaved forms of 33 and 36 kDa. The anti-inflammatory activity of AnxA1 is exerted by binding to the FPR2 that is expressed on fibroblasts, endothelial cells, stromal cells, and is highly abundant in leukocytes [34][35]. In fact, once phosphorylated by PKC, AnxA1 migrates to nuclei where it induces the expression of pro-inflammatory cytokines [36]. Moreover, the 33 kDa cleaved form of AnxA1 generated by Calpain 1 increases the immobilization of neutrophils on endothelial cells thus facilitating the trans-endothelial migration and promoting inflammation [37].

AnxA1 binds, through its N-terminal portion, to S100A11 another calcium-binding protein and, when AnxA1 is bound to S100A11, it displays a high affinity for cPLA2. On the other side, it has been shown that, in squamous carcinoma cells, when there is an exposure to EGF, EGFR phosphorylates AnxA1 in its tyrosine 21 residue and subsequently AnxA1 suffers a proteolytic cleavage at its tryptophan 12 residue by Cathepsin D. Such cleavage results in the dissociation from S100A11 and cPLA2. In this way, the anti-cPLA2activity of AnxA1 is abolished and cPLA2 can promote tumor growth (Figure 1) [38]. 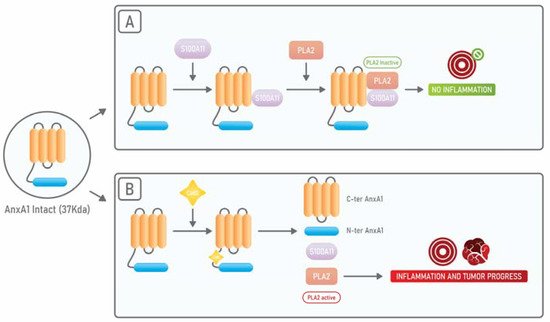 Figure 1. Schematic representation of AnxA1 cleavage and subsequent lack of inhibition of PLA2. (A) When AnxA1 is present in its intact form of 37 kDa, it binds to S100A11 and this complex is able to bind and inhibit PLA2, resulting in inflammation prevention and/or resolution. (B) When AnxA1 is cleaved by the protease Cathepsin D (CatD), the release of its N-terminal peptide and its 33 kDa C-terminal portion takes place. Once cleaved in this way, AnxA1 is no longer able to bind to S100A11. The disruption of such complex results in the inability to bind and inhibit PLA2. Hence, PLA2 remains functional and promotes inflammation and tumor progression.

AnxA1 has been described as an essential player in several aspects of cancer, such as proliferation, chemoresistance, invasion, and metastasis formation [39]. In fact, AnxA1 plays important roles in the progression of several types of tumors, including astrocitomas, glioblastomas, melanomas, and those affecting the lung, breast, and pancreas [40][41]. In breast cancer, it has been described that AnxA1 supports the metastatic process by promoting the TGF-β/Smad signaling and the subsequent EMT [42]. Interestingly AnxA1 can be found in a secreted form in breast, prostate, and pancreatic cancers.

4. PLA2 and Annexin A1 in Cancer-Derived Extracellular Vesicles

EVs are lipid bilayer delimited particles that are released from cells. EVs promote intercellular communication through contacting membranes of target cells or by transferring EVs’ cargos, which can be lipids, proteins, and nucleic acids [47]. When MVBs fuse with the plasmatic membrane ILVs are released as exosomes [48][49]. Cancer cells produce copious amounts of both MVs and exosomes that can be found in all biological fluids altering the phenotype of cells with which they come in contact, promoting a pro-tumoral gene expression [50][51].

sPLA2is present in the extracellular milieu either within exosomes or as an exosome-free secreted form [52]. It has been shown that both of these PLA2forms act on phospholipids present on MVs promoting the release of AA and therefore amplifying the inflammatory process [53][54]. Hence, although exosomes and MVs represent distinct structures, these EVs can cooperate in the induction of the immunosuppression and inflammation of TME (Figure 2). 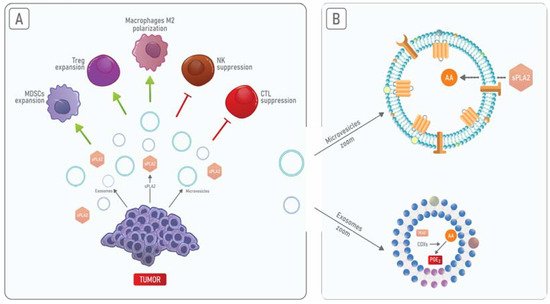 Figure 2. Schematic representation of PLA2 and AnxA1 immunosuppressive functions in TME. (A) Tumors release AnxA1 cleaved form in microvesicles and either free sPLA2 or PLA2 localized within tumor-derived exosomes. Such type of release promotes immunosuppression by inhibiting NK and CTL activity while enhancing Tregs and MDSCs expansion and M2 polarization of macrophages. (B) Free sPLA2 acts on lipids of microvesicles, releasing arachidonic acid (AA). The presence of the AnxA1 cleaved form in microvesicles probably supports sPLA2 action.