Submitted Successfully!
Thank you for your contribution! You can also upload a video entry related to this topic through the link below:
https://encyclopedia.pub/user/video_add?id=11841
Check Note
2000/2000
Cystic Fibrosis Human Organs-on-a-Chip
Edit
Upload a video
This entry is adapted from 10.3390/mi12070747

Cystic fibrosis human organs-on-a-chip can be used in patients with cystic fibrosis (CF). CF is an autosomal recessive disease caused by mutations in the cystic fibrosis transmembrane regulator (CFTR) gene: the gene product responsible for transporting chloride and bicarbonate ions through the apical membrane of most epithelial cells.

Since the first description of CF in 1938 [1], over 2000 mutations in the CFTR gene that produce a broad range of patient phenotypes have been discovered [2][3]. Presently, mutations are categorized into six classes based on their primary biological defect (Figure 1) [4]. Class I (synthesis) mutations result in a total or partial loss of CFTR protein expression caused by the introduction of a premature termination codon [3]. This loss of CFTR protein expression leads to a complete loss of CFTR chloride channel function in the affected epithelia. Class I mutations are present in ~10% of patients with CF. Common examples of class I mutations include G542X, W1282X, and R552X. Class II (misfolding) mutations are associated with defective processing due to a misfolded CFTR protein [2]. During processing, the misfolded protein is targeted for degradation through the ubiquitin pathway. Class II mutations are the most common mutations in the CF population, with over 85% of patients having the F508del mutation [4][5]. Class III (regulation) mutations are gating mutations found in the ATP binding domains of the CFTR protein.
A missense mutation in this gene region produces a protein that is unable to be phosphorylated, which causes a decrease in chloride channel activity [6]. The most common mutation in this category is G551D, and other, less common mutations include V530F and S549R. Class IV (conduction) mutations are associated with alterations in the membrane spanning domain of the CFTR. These missense mutations produce a protein that has reduced cAMP-dependent chloride channel activity [2]. Individuals with class IV mutations usually present with milder CF symptoms. Class IV mutations are detected in less than 3% of CF patients, with the most common examples including R117H, D1152H, and R347P. Class V (mRNA expression) mutations result in a total reduction in the CFTR protein, usually through pre-mRNA splicing. These splicing errors result in the decreased expression of CFTR on the cell surface. Class V mutations are detected in less than 3% of CF patients, with the most common mutations including A455E [7], 3849 + 10kbC > T [8], 2789 + 5G > A [8], and 3272 − 26A > G [9]. Class VI (CFTR instability) mutations, including the Q1412X mutation, cause the instability of a functional CFTR protein [10]. This instability causes increased CFTR turnover on the apical surface of cells. 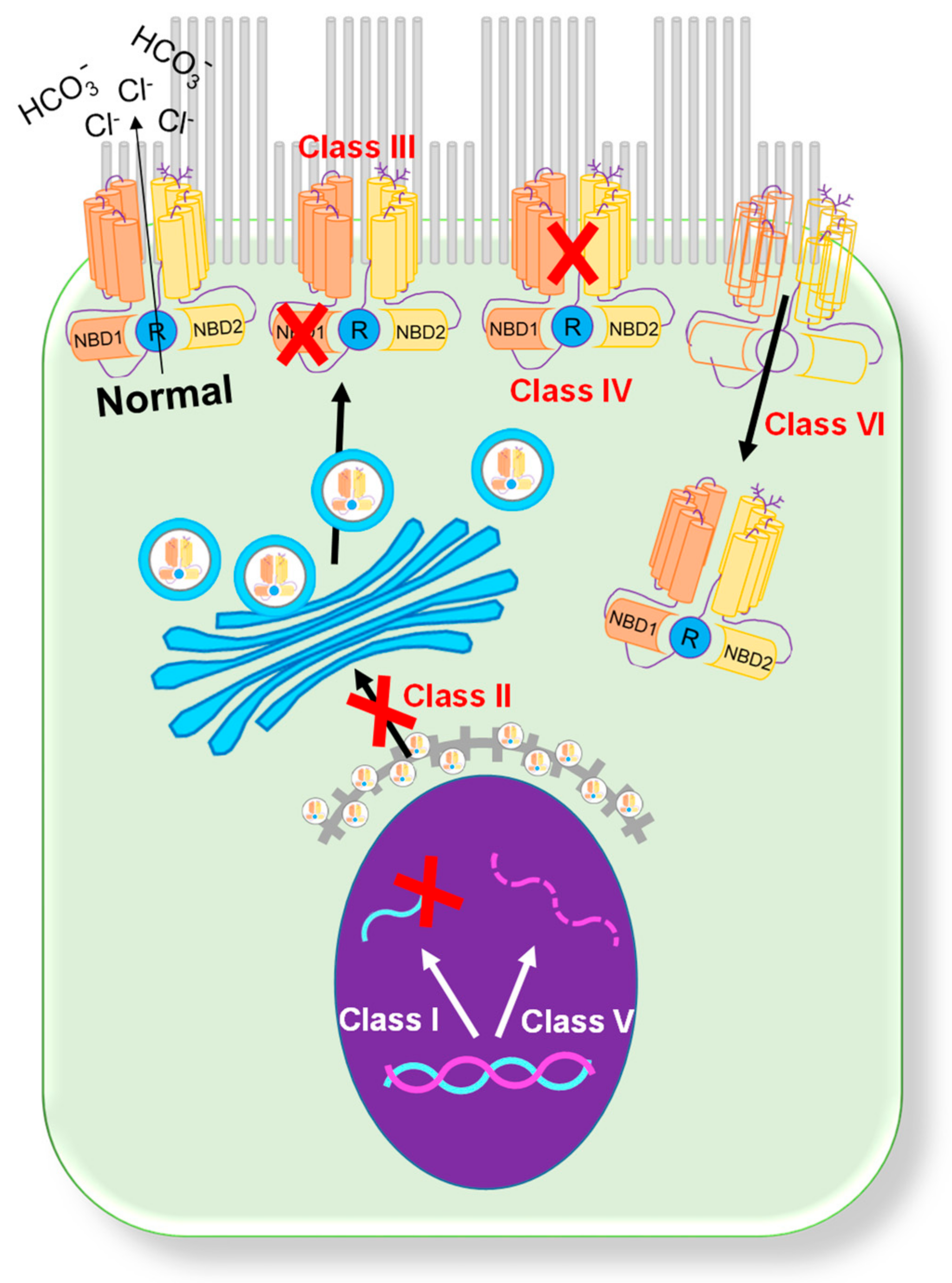 Cell culture continues to be cost effective and lends itself to high throughput screening while circumventing the ethical and regulatory considerations pertaining to animal models. The development of unique in vitro models provides a system that can not only mimic tissue–tissue interactions but can also mimic the physical microenvironment in which the cells of interest are found. The application of microfluidic-based organ-on-a-chip models to reproduce complex structural and functional living human organs is indispensable in understanding diverse biological responses and elucidating disease mechanisms. Microfluidic device can be fabricated through photolithography and soft lithography techniques (Figure 2A) [11][23]. 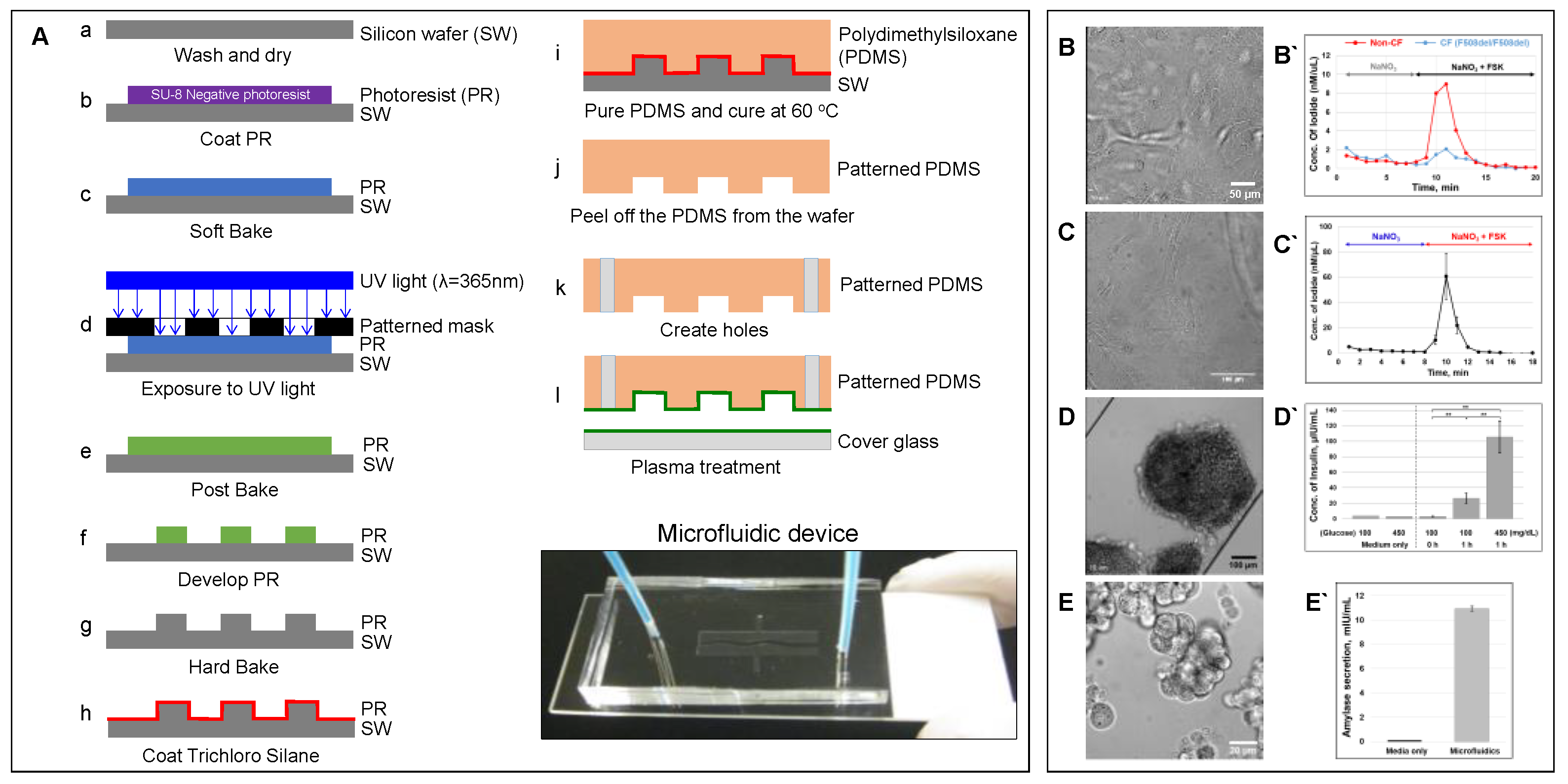 PDMS has been widely used to fabricate organs-on-a-chip because of its biocompatible material and its biomechanical characteristics [24]. PDMS has high gas permeability allowing cellular oxygenation, an issue that previously required an additional oxygen generator to supply sufficient oxygen to cultured cells [25]. Removing the need for supplemental oxygen allows researchers to culture cells with high metabolic demands, expanding the range of organs that can be developed. Another advantage of PDMS is its optical transparency. Specifically, real-time visualization is possible using high-resolution phase-contrast and fluorescence microscopy imaging [23][26]. A novel design that is composed of two cell culture chambers stacked on top of one other and separated by a thin layer of porous membrane allows researchers coculturing two different types of cells simultaneously (Figure 3)[11]. This unique model helps not only to mimic in vivo structure, but also to investigate cell-cell interaction[23]. 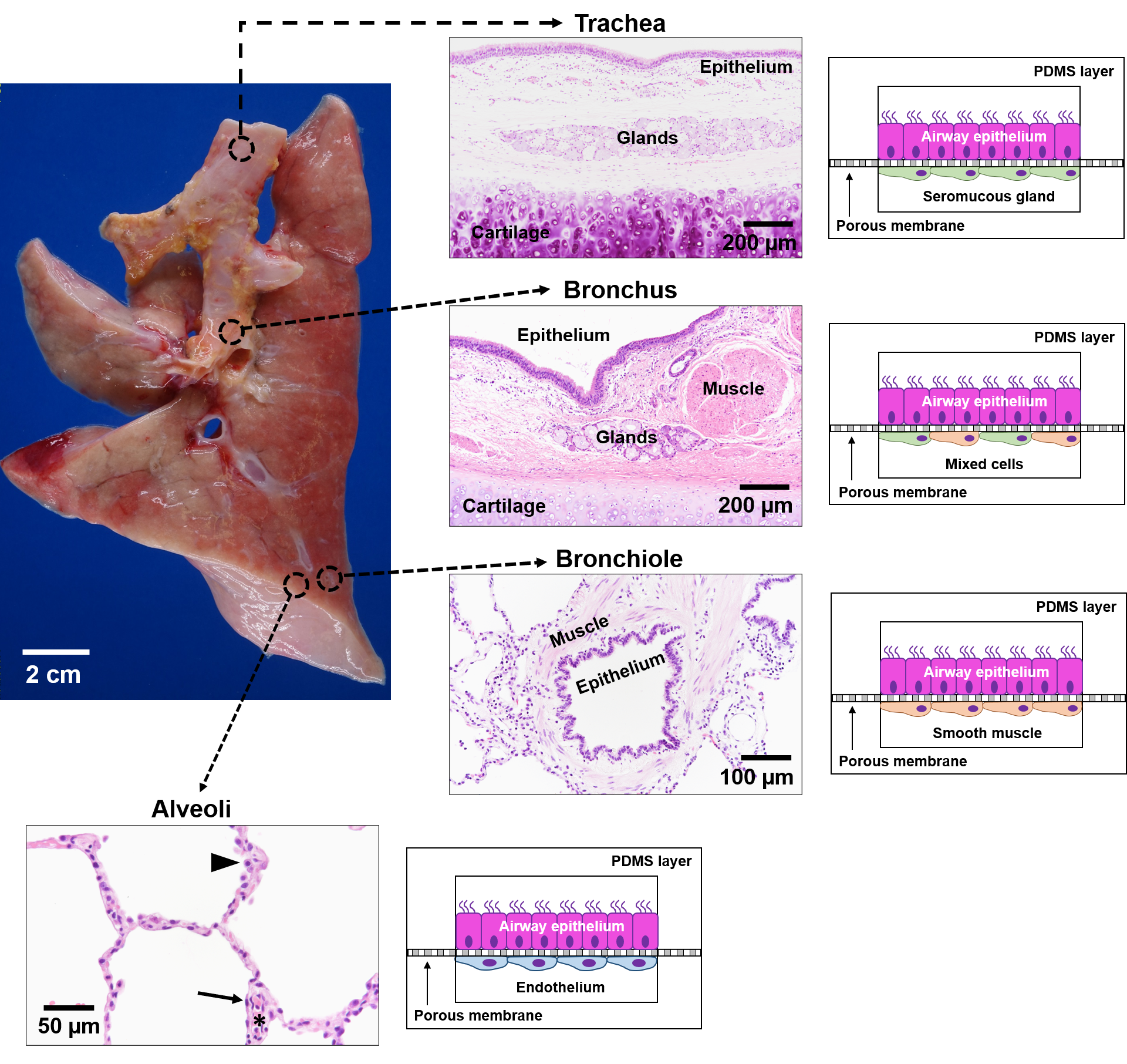 In addition, PDMS organ-on-a-chip is easily portable and can be connected to a peristaltic pump to feed cells automatically with various flow rates. The ability to control fluid flow allows for better control of the cellular environment. These organs-on-a-chip allow for the reproduction of both the physiological fluid shear and pulsatile flow patterns that more effectively mimic human organs [26]. Furthermore, the small size of the cell culture chambers minimizes the consumption of reagents, providing opportunities to achieve high throughput and high-resolution analysis [23].

One of the challenges using microfluidic-based organ-on-a-chip is preventing air bubbles within the system. The cell culture chamber thickness is on a micron scale, and air bubbles can easily enter and become trapped inside the chamber. Cells in the culture chamber can be washed away or damaged as air bubbles pass. In order to prevent this complication, the temperature of the refreshing media and the media in the chip must be the same, and all surfaces in the chamber must be smooth, including the tubing.
A major issue with regard to PDMS is that small molecules can adsorb onto the highly hydrophobic PDMS surface (contact angle > 75°) (Figure 4A) [24][27]. This is a notable disadvantage in studies focused on drug delivery and drug discovery [28][29]. To address this challenge, the PDMS surface is exposed to oxygen plasma during the fabrication of the organ-on-a-chip. This process changes the surface to become highly hydrophilic (contact angle < 20°) (Figure 4A). Silanol-functional groups (SiOH) are also created on the PMDS surface. Contact between the silanol groups results in the formation of siloxane bridges (Si-O-Si) on the PDMS surface [30]. This allows permanent bonding of the PDMS surface with glass, or another PDMS surface, without requiring an adhesive. The wettability of the plasma treated PDMS surface, however, is not stable. Regression back to a highly hydrophobic surface occurs within three days (Figure 4B). To overcome this limitation, a smart PDMS has been developed by adding PDMS-PEG block copolymer to the normal PDMS before casting the substance into the mold [24]. This smart PDMS maintains a hydrophilic surface for up to 20 months, with reduced non-specific adsorption of IgG, albumin, and lysozyme [24]. Furthermore, PDMS can be maintained as a hydrophilic surface by coating with the hydrophilic polyvinyl alcohol (PVA) [27]. We demonstrated that PVA coated PDMS maintains a hydrophilic surface (contact angle < 20°) for at least 3 months (Figure 4B)[11]. 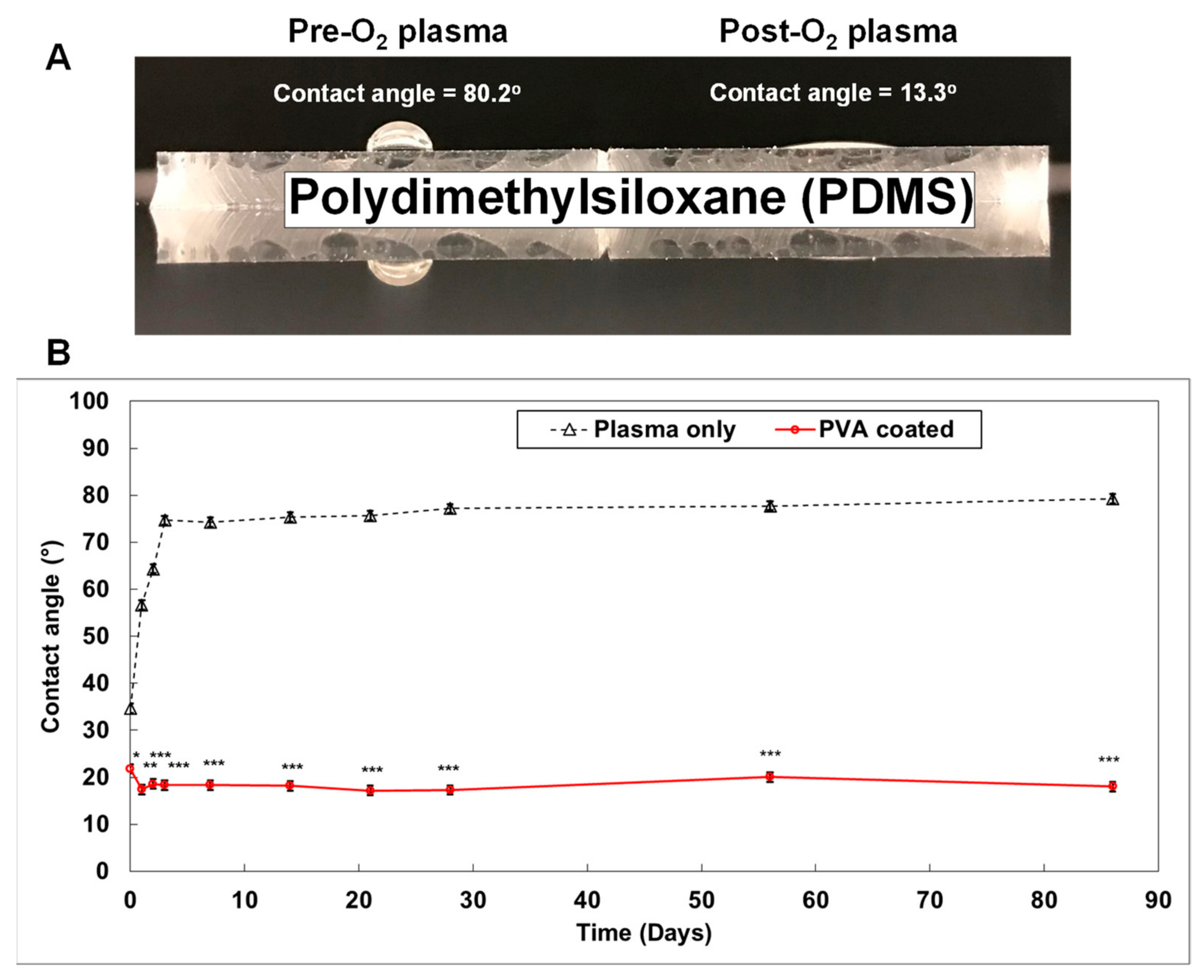 Figure 4. Generating a smart PDMS by modifying a hydrophobic PDMS surface[11]. PDMS is a highly hydrophobic material (A). When the PDMS surface is exposed to oxygen plasma for 30 s, it becomes highly hydrophilic (contact angle = 13.3°). It returns to a hydrophobic status within 3 days (B; black dotted line). However, the polyvinyl alcohol (PVA) coated PDMS surface maintained a hydrophilic status for over 3 months ((B); red solid line). (p-values: * <0.05, ** <0.005, *** <0.0005; number of samples: n = 3 in each condition; data represented as mean ± SD).

Individualized pharmacotherapy has the potential to provide a feasible, cost-effective treatment options for CF. Traditional use of animal models requires substantial time and resources and often fails to predict toxicity or efficacy of a drug in humans. The microengineered 3D microfluidic-based organs-on-a-chip mimic the biomechanical and biological microenvironments within human organs. These systems provide a viable approach to better predict drug efficacy and toxicity in individual patients. The organs-on-a-chip devices are also amenable to scale-up for commercial use in pharmaceutical applications. This high throughput system has potential utility in advancing patient care by enhancing efficient screening of new potential CF therapies and supporting new drug discovery.

More
© Text is available under the terms and conditions of the Creative Commons Attribution (CC BY) license (http://creativecommons.org/licenses/by/4.0/)
Upload a video for this entry
Information
Subjects: Engineering, Biomedical
Contributor MDPI registered users' name will be linked to their SciProfiles pages. To register with us, please refer to https://encyclopedia.pub/register :
KYU SHIK MUN
View Times: 52
Revision: 1 times (View History)
Update Time: 08 Jul 2021
Table of Contents
1000/1000
Hot Most Recent