Submitted Successfully!
Thank you for your contribution! You can also upload a video entry related to this topic through the link below:
https://encyclopedia.pub/user/video_add?id=11694
Check Note
2000/2000
Health Benefits of Indigenous Durian
Edit
Upload a video
This entry is adapted from 10.3390/foods8030096

Durian (Durio zibethinus Murr.) is an energy-dense seasonal tropical fruit grown in Southeast Asia. It is one of the most expensive fruits in the region. It has a creamy texture and a sweet-bitter taste. The unique durian flavour is attributable to the presence of fat, sugar, and volatile compounds such as esters and sulphur-containing compounds such as thioacetals, thioesters, and thiolanes, as well as alcohols.

Durio zibethinus Murr. (family Bombacaceae, genus Durio) is a seasonal tropical fruit grown in Southeast Asian countries such as Malaysia, Thailand, Indonesia, and the Philippines. There are nine edible Durio species, namely, D. lowianus, D. graveolens Becc., D. kutejensis Becc., D. oxleyanus Griff., D. testudinarum Becc., D. grandiflorus (Mast.) Kosterm. ET Soeg., D. dulcis Becc., Durio sp., and also D. zibethinus [1]. However, only Durio zibethinus species have been extensively grown and harvested [2]. In Malaysia, a few varieties have been recommended for commercial planting such as D24 (local name: Bukit Merah), D99 (local name: Kop Kecil), and D145 (local name: Beserah). In Thailand, durian species were registered based on local names such as Monthong, Kradum, and Puang Manee. There are similar varieties between Malaysian and Thailand but with different name as follows: D123 and Chanee, D158 and Kan Yao, and D169 and Monthong [3]. Similar to Thailand, durian varieties in Indonesia are registered based on their local names, such as Pelangi Atururi, Salisun, Nangan, Matahari, and Sitokong [1][4].
The durian fruit shape varies from globose, ovoid, obovoid, or oblong with pericarp colour ranging from green to brownish [1] (Figure 1). The colour of edible aril varies from one variety to the others and fall in between the following: yellow, white, golden-yellow or red [5]. It is eaten raw and has a short shelf-life, from two to five days [5][6]. Fully ripened durian fruit has a unique taste and aroma, and is dubbed “king of fruits” in Malaysia, Thailand, and Singapore. The unique taste and aroma is attributed to the presence of volatile compounds (esters, aldehydes, sulphurs, alcohols, and ketones) [6][7]. 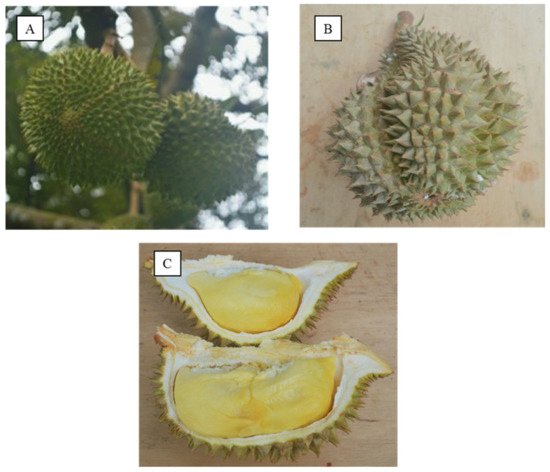 Figure 1. (A) Durian tree with fruit. (B) Durian fruit with its spiny rind. (C) Durian aril (flesh).
Hundreds of volatile compounds have been identified in Malaysian, Thailand, and Indonesian durian varieties such as esters (ethyl propanoate, methyl-2-methylbutanoate, propyl propanoate), sulphur compounds (diethyl disulphide, diethyl trisulphide and ethanethiol), thioacetals (1-(methylthio)-propane), thioesters (1-(methylthio)-ethane), thiolanes (3,5-dimethyl-1,2,4-trithiolane isomers), and alcohol (ethanol) [6][7]. However, the bioactivity of these compounds has not yet been thoroughly explored. A study by Alhabeeb et al. (2014) showed that 10 g/day inulin propionate ester (a synthetic propionate) releases large amounts of propionate in the colon. This subsequently increases perceived satiety (increased satiety and fullness, decreased desire to eat) [8]. Chambers et al. (2015) showed that the same propionate ester (400 mmol/L) increased peptide YY (PYY) and glucagon-like peptide 1 (GLP-1) in primary cultured human colonic cells. This study also showed that 10 g/day of inulin-propionate ester reduced energy intake (14%) compared with the control (inulin) [9].
Durian is also rich in polyphenols such as flavonoids (flavanones, flavonols, flavones, flavanols, anthocyanins), phenolic acids (cinnamic acid and hydroxybenzoic acid), tannins, and other bioactive components such as carotenoids and ascorbic acid [10][11][12][13][14][15][16][17][18][19][20][21][22][23][24][25]. Current epidemiological studies have suggested that polyphenols decrease the risk of chronic diseases (e.g., cardiovascular diseases, cancers and diabetes) [26][27][28][29][30]. However, polyphenols might act synergistically with other phytochemicals [26]. However, currently, there are limited studies exploring the health benefits of bioactive components in durian.

Durian is rich in macronutrients (sugars and fat) and micronutrients (potassium), dietary fibres, and bioactive and volatile compounds. An intake of one serving size of durian aril (155 g) contributes to 130 to 253 kcal and is equivalent to one large pear and four small apples without skin, respectively [6][31][32][33]. Durian is energy-dense due to sugar and fat content and hence, might contribute to daily energy intake and will also increase postprandial blood glucose.

3.1. Effects of Durian on Blood Glucose

Durian is high in sugar, but supplementation of 5% freeze-dried Monthong (Thailand variety) in 1% cholesterol-enriched diets in rats for 30 days did not raise the plasma glucose level compared with control diet [40]. In humans, Robert et al. (2008) showed that durian had the lowest glycaemic index (GI = 49) compared with watermelon (GI = 55), papaya (GI = 58), and pineapple (GI = 90) [41]. The low GI value for durian might be due to the presence of fibre and fat. Fibre slows digestion in the digestive tract and will slow down the conversion of the carbohydrate to glucose, thus lower the GI of food [42]. Fat does not have a direct effect on blood glucose response, but it may influence glycaemic response indirectly by delaying gastric emptying, and thus slowing the rate of glucose absorption [43].
Durian is rich in potassium and is similar to potassium-rich fruit, i.e., banana [31]. A meta-analysis study showed that there was a linear dose-response between low serum potassium and risk of type 2 diabetes mellitus [44]. Chatterjee et al. (2017) demonstrated that potassium chloride supplementation reduced the worsening effect of fasting glucose in African-Americans compared with placebo [45]. Collectively, the evidence has shown that potassium content in durian might play a role in the regulation of blood glucose. The effect of durian on blood glucose has not been thoroughly explored both in animal and human studies, and hence, warrants further investigation. Potassium might play a role in glucose homeostasis but might also have negative implications in certain conditions. For instance, those with chronic kidney disease (CKD), diabetes mellitus (DM), and heart failure (HF) or on pharmacological therapies may develop hyperkalaemia [46].

Anti-atherosclerotic properties of durian aril have been reported in experimental rat models [10][11][20][22][47][40]. Previous in vitro and in vivo studies investigated the health benefits of durian (Monthong variety) on lipid profiles [10][11][22]. Haruenkit et al. (2007) showed that rats fed with durian significantly (p < 0.05) reduced postprandial plasma total cholesterol (TC) and low-density lipoprotein cholesterol (LDL-C) with 14.9% and 21.6%, respectively, compared with control group [10]. Gorinstein et al. (2011) showed a reduction in the levels of plasma TC (12.1%), LDL-C (13.3%), and triglycerides (TG) (14.1%) compared with the control group [11]. The results were consistent when tested with other durian from Thailand varieties (Chanee and Kan Yao) compared with control. Leontowicz et al. (2011) showed that rats supplemented with ripe durian had significantly lowered TG (26.3%), but not significant in TC (4.8%) and LDL-C (6.3%). Histological analysis demonstrated that ripe durian protected the liver and aorta from exogenous cholesterol loading and protected the intimal surface area of the aorta [20]. Durian also demonstrated the ability to hinder postprandial plasma lipids compared with snake fruit and mangosteen [10][11][22]. Previous studies have showed that propionate (0.6 mmol/L) inhibited fatty acid and cholesterol synthesis in isolated rat hepatocytes [48]. In our review, three different propionate esters were identified, i.e., ethyl propionate, methyl propionate and propyl propionate. These esters could be a potent inhibitor for free fatty acids and cholesterol synthesis but this warrants further investigations. However, these esters are highly volatile and could be easily vaporized during sample processing and storage [48].

The polyphenol and flavonoid contents of durian are in the range of 21.44 to 374.30 mg GAE and 1.90 to 93.90 mg CE per 100 g FW. The mechanisms of action of polyphenols strongly relates to their antioxidant activity. Polyphenols are known to decrease the level of reactive oxygen species in the human body [49]. The phenolic groups present in the polyphenol structure can accept an electron to form relatively stable phenoxyl radicals, thereby disrupting chain oxidation reactions in cellular components [50]. On the other hand, polyphenols could induce apoptosis and inhibit cancer growth [51][52][53][54]. There are many studies pointing out an essential role of polyphenolic compounds as derived from vegetables, fruits, or herbs in the regulation of epigenetic modifications, resulting in the antiproliferative protection [55]. Jayakumar and Kanthimathi studied the anti-proliferative activity of durian using a breast cancer cell line (MCF-7). This study showed that durian fruit can be considered as potential sources of polyphenols with protective effects against nitric oxide-induced proliferation of MCF-7 cells, an oestrogen receptor-positive human breast cancer cell line [56]. At a concentration of 600 µg/mL, durian fruit extracts inhibited MCF-7 cell growth by 40%. However, an in vivo study is needed to confirm this effect.