Submitted Successfully!
Thank you for your contribution! You can also upload a video entry related to this topic through the link below:
https://encyclopedia.pub/user/video_add?id=11690
Check Note
2000/2000
Neural Network and Imformation Uses
Edit
Upload a video
This entry is adapted from 10.3390/info12070272

Recurrent Neural Networks are powerful machine learning frameworks that allow for data to be saved and referenced in a temporal sequence. This opens many new possibilities in fields such as handwriting analysis and speech recognition. This paper seeks to explore current research being conducted on RNNs in four very important areas, being biometric authentication, expression recognition, anomaly detection, and applications to aircraft.

People have always been fascinated by the idea of creating an artificial human brain and these efforts became known as artificial neural networks (ANN). There are numerous variations of specialized ANNs; take convolutional neural networks (CNN), for example, which are adapted to work specifically with image or video data. RNNs are unique because they are comprised of many neural networks chained together, which allows them to process a series of data where a network learns from its previous experiences. RNNs have a wide array of applications, ranging from written language to speech recognition.

Another key implementation of Recurrent Neural Networks is in the field of facial recognition. Facial recognition ranges from identifying one’s identity to deciphering their emotions. Expression recognition often relies on a CNN for extraction of important features from image data before that image data can be used by the RNN [6]. The ability for software to be able to distinguish different human emotions will be of increasing importance in the future.

Anomaly detection can range from detecting spam emails, to malicious network traffic and maritime vessel traffic. These specialized neural networks can help detect anomalous flight conditions, predict excessive engine vibrations, determine the remaining life of a turbine engine, and aid in landing [7]. It looks at which patterns are normal and denotes an event outside of the margin of normal operation as anomalous. The goal of the paper [8] is to detect patterns in IoT devices which can then be applied to track unusual patterns in a network of IoT devices.

Sensors such as iris scanners or fingerprint readers are amongst the most popular forms of smartphone biometric authentication. “Fingerprint and face recognition is based on a physical characteristic, but biometrics can also recognize how a user performs a specific activity” [9]. Many different RNN models were tested with varying vector size, number of filters, and fully connected layers. Other novel approaches to smartphone authentication are through ECG signals [10][11] and holding position combined with touch type authentication [12].

An increasingly popular form of biometric authentication is through the recognition of mouse movements or keyboard-based behavioral patterns. [13] is a novel attempt to detect patterns in mouse movements using RNNs and the architecture of this model is represented in Figure 1. The paper also describes that data like mouse movement information is easy to collect and contains little privacy-sensitive information. The proposed method involves a fusion of a CNN-RNN, since complex identification tasks benefit from utilizing the fusion of two types of neural networks. 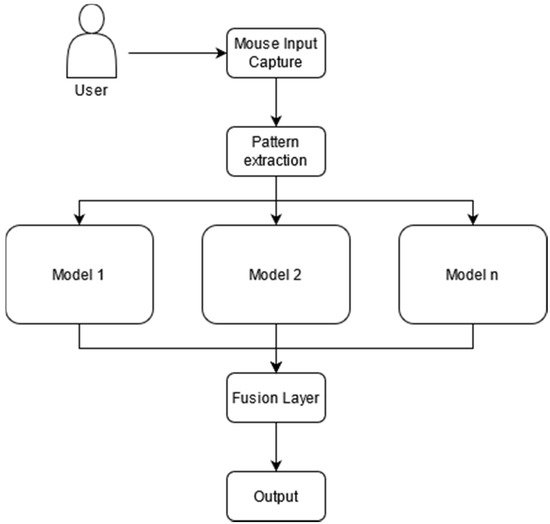 This database is comprised of 16 signatures and 12 professional forgeries per user with a total of 400 total users. When this data is fed into the LSTM network the final EER was 6.44% for 1:1 and 5.58% for 4:1 (ratio of number of original signatures to skilled forgeries). Another attempt to authenticate users from their fingerprint data uses handwritten passwords instead of a signature. To collect this data, each user would use their fingers to write out the digits 0–9 a total of four times over two sessions.

These researchers choose to use four different datasets to train and test their model. These datasets are the extended Cohn-Kanade database, which contains 593 image sequences from 123 different subjects, the MMI dataset, which consists of 2885 videos of facial expression from 88 subjects, the Static Facial Expressions in the Wild dataset, which is made up of 663 expression samples, and finally their own dataset, compiled from 80 subjects who each performed the 6 basic emotions. The six basic emotions present in each of these datasets are fear, disgust, anger, happiness, sadness, surprise, and neutral. With their proposed method [14], they were able to attain 99% on CK + dataset, 81.60% on MMI, 56.68% on SFEW (which is highly accurate for that dataset), and 95.21% on their own dataset.

The multimodal approach to expression recognition implements multiple modalities into the RNN framework to improve recognition accuracy. These types of modalities include, but are not limited to, facial expressions, speech, head movements, and body movements. This dataset contains modalities like audio, video, electrocardiogram, and electrodermal activity for each subject, with the emotions of arousal and valence being portrayed. The best results from this proposed model [15] were divided, with the best arousal results coming from the early fusion of all the modalities into the LSTM network that is displayed in Figure 2, and the best valence results coming from the late fusion methodology. 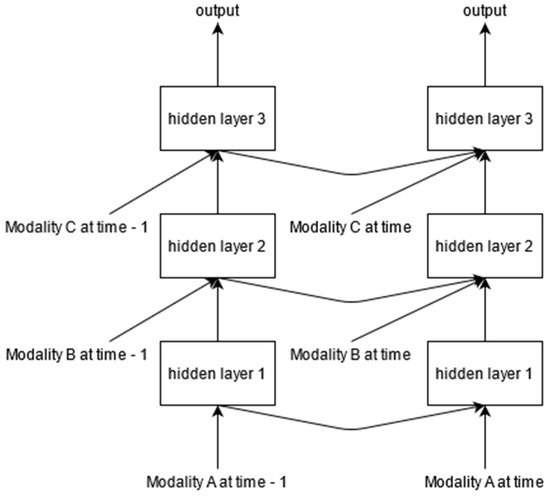 Extracting these temporal features was also the goal of [16]. This proposed model extracts the temporal geometry and spatial features, then fuses them to be passed into the LSTM RNN. Both models [17][16] surpass methods that rely solely on a CNN to detect expression. This is where an LSTM becomes helpful in extracting temporal features.

The goal of the research done in paper [18] is to improve transportation and shipping through anomaly detection to increase awareness of all vessels and reduce potential accidents. The researchers use an LSTM RNN architecture to track anomalous vessel movements by feeding it trajectory data shown in Figure 3. The RNN was able to detect anomalous course, speed, and route. The anomaly can also be applied to occupancy detection, anomalous exchange rate prices, network anomaly detection, and anomalous stock price detection. 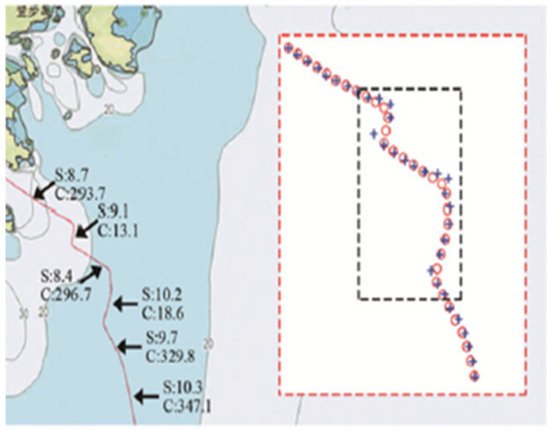 Regulating and monitoring water quality is important for the health and safety of all who rely on that water supply. With a RNN and a dataset collected from real world data [19], it is possible to monitor the quality of water flowing through a water treatment facility. This data consists of temperature, chlorine dioxide levels, acidity (pH) levels, etc. LSTM RNNs can also be used for anomaly detection in network traffic.

Anomaly detection can also apply to tracking and identifying abnormal occurrences surrounding events such as running, loitering, or driving. Each dataset is comprised of multiple videos displaying normal and abnormal events. The sRNN can go frame by frame through these videos and track the anomaly as it progresses through the scene. RNN based strategies can also be useful for detecting anomalies in network traffic.

The data from the flight is collected and the network is trained with normal flight data. This proposed method [21] was able to reach an accuracy of 99.7% for forward velocity anomalies and 100% for pneumatic lifting anomalies. A similar methodology can be applied to detecting anomalies in manned aircraft, specifically commercial airline flights. Another group of researchers [22] also tried to detect anomalous flight parameters using data generated by X-Plane simulations.

The methodology of [23] is to use a LSTM-HMM fusion architecture, which can be seen in Figure 5, to predict remaining engine life. LSTM RNNs can also be used to detect excess engine vibration. If a turbine engine has excess vibrations, it can advise engineers that an engine needs maintenance or replacement. The purpose of this model was to predict engine vibrations. 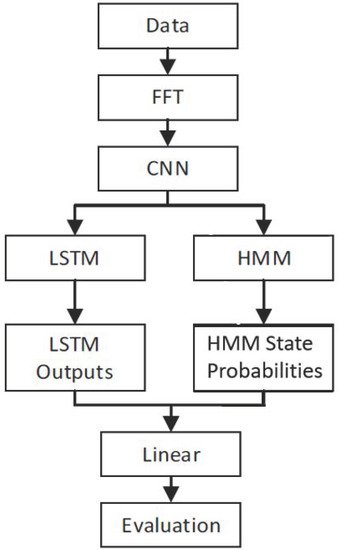 In Table 1above each of the three main papers from all four topics are summarized by methodology which includes the structure and data collection strategies, the results of each of the papers along with the dataset used and inference time if available, and finally the pros and cons of each paper. Each method of biometric authentication discussed above has a unique application and one might want to choose a method to better fit their needs, for example the mouse movement authentication technique can be a very simple, portable, and secure method. However, a drawback is that it may take longer for users to configure their information when compared to a fingerprint reader or take less thought like inertial gait authentication. For any authentication technique, there is always a balance speed and security.

Choosing the best method for facial expression recognition might be slightly more straight forward since you would like a method that is both fast and accurate. All the papers reviewed above had great scores, but image processing still takes the most time depending on the pixel density of each frame in the video and given that a 3 s video at 60 fps is 180 frames that need to be propagated through the network.

Now there are different types of RNNs like an LSTM-RNN or a stacked RNN framework A growing category of anomaly detection is in aviation. Aviation is a newer and growing section of anomaly detection that focuses on all parts of the aircraft from engine vibration to its trajectory. An RNN based approach has also been proven to be the most useful strategy in aviation as well and any new models would greatly benefit from an LSTM-RNN approach if there is any trouble on deciding what model to use.

The goal of this paper was to provide insights into current research being done in four similar yet very distinct fields. These areas are biometric authentication, expression recognition, anomaly detection, and aviation. This paper specifically looked at how Recurrent Neural Networks were changing the game and allowing for new innovations. With continued research into these areas, there can be even more improvement in each of these areas: making sure that user data and critical systems are secured with top-level biometric authentication, paving a road for improvement in interactions between man and machine, detecting malicious actors and making sure people stay safe through novel anomaly detection techniques, and making air travel even safer while getting the most use out of aircraft parts.