Submitted Successfully!
Thank you for your contribution! You can also upload a video entry related to this topic through the link below:
https://encyclopedia.pub/user/video_add?id=11669
Check Note
2000/2000
Insect Foods and Its Acceptance
Edit
This entry is adapted from 10.3390/foods8030095

Insects, especially mealworms, have a similar or higher nutritional value than many conventional food sources. For example, the protein content of mealworm larvae is reported to be almost 50% of dry weight, while the fat content is about 30% of larval dry weight. Mealworms can be cooked by different methods, such as hot air drying, oven broiling, roasting, pan frying, deep frying, boiling, steaming, and microwaving. Oven broiling in particular gives a desirable aroma of steamed corn for consumers.

The global population is steadily increasing [1][2], making food security a crucial issue world-wide. Both the quantity and quality of food supply are of interest in the context of food security. All major nutrients are important, but protein is one of the main nutrients required by humans, and protein deficiency leads to severe illness. Protein from animal sources may be especially valuable, as it contains essential amino acids that are not found in many plant proteins. However, protein from animal sources is not always affordable for a large share of the global population [3]. Moreover, devastating wars are still occurring in various parts of the world, resulting in millions of people, especially innocent civilians, being displaced and often suffering from malnutrition due to a lack of food. During or immediately after wars, people need a fast source of protein, but conventional sources of protein (animals and plants) take a long time to become available. This means there is a need for fast protein sources that are nutritionally similar to protein from conventional sources. During the First World War, Germany used single-cell protein as the source of protein in animal feed, in order to meet human protein requirements [4]. However, direct consumption and excess consumption of single-cell protein by humans have negative effects on health, since it contains nucleic acids which cause the precipitation of uric acid in the human body, leading to gout and the formation of kidney stones. Another issue with the production of protein from animal sources is that it requires advanced resources, in many cases making it unsustainable for the environment [5]. Moreover, animal rearing for food is controlled by strict ethical rules and regulations, which can complicate the process. For the above reasons, an alternative source of protein is needed to assist in assuring food security for the increasing global population. One such source could be insects. The aim of this literature review was to examine the use of insects as a sensory appealing food and to identify knowledge gaps in this area (Figure 1). Although it is commonly claimed that insects are a non-traditional food, more than two billion people in 113 countries generally eat insects directly or use them as food ingredients [6][7][8]. It is estimated that there are up to 1900–2000 species of edible insect [6][9]. The tradition of eating insects is very old, e.g., there is evidence that insects were eaten during pre-historic times, forming an important source of protein [10][11]. 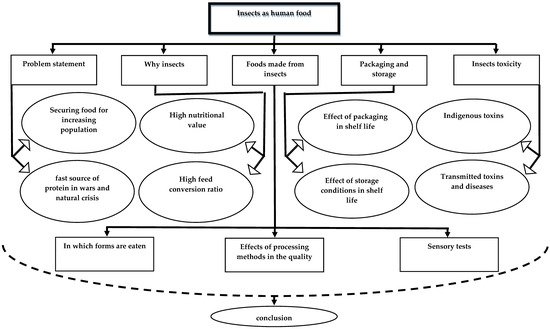 Insects have been proven to have high nutritional value, especially the protein fraction in terms of adequate amino acid composition [12]. The amino acid composition in the larvae of yellow mealworm (Tenebrio molitor) is particularly favorable [13]. A study investigating four insects commonly eaten in Nigeria (African palm weevil, coconut palm rhinoceros beetle, caterpillar, and termite) found that the essential amino acids lacking in cereal protein, i.e., lysine and methionine, were present in relatively high amounts in these insects [14]. The overall protein, fat, and mineral content in insects has been investigated in many studies [15][16][17][18]. It has been found that the protein content ranges from 40 g/100 g to 75 g/100 g, the fat content from 7 g/100 g to 77 g/100 g, and the mineral content from 3 g/100 g to 8 g/100 g on a dry weight (DW) basis [19]. A study by Zielińska and co-authors found that the protein, fat, and mineral content of mealworm larvae was around 52 g, 24 g, and 1 g per 100 g dry sample, respectively [20]. A more recent study by Zhao and co-authors found that mealworm larvae contained about 51% protein, 32% fat, and 5% ash on a DW basis [13].
Furthermore, studies have shown that some insects have high concentrations of lipids. For example, the lipid percentage of yellow mealworm larvae was 27.4% [21]. This is why insects may be used to enrich food with lipids. When 20% grinded yellow mealworm larvae was mixed with wheat flour to make extruded cereals, the final product improved in terms of lipid content from 0.9% to 5.4% [21]. Insects can have high levels of unsaturated fatty acids, which needs to be considered during their processing and storage [13]. With regard to vitamins, insects in general have been found to have low percentages of retinol but to be rich in others such as riboflavin, pantothenic acid and biotin [18]. Folic acid, in some cases, has also been found in high amounts [18].
Regarding the nutrient content, insects such as mealworms, but also other species, have the potential to complement and/or replace conventional foods, as they exhibit favorable nutrient profiles [20]. For example, the protein content of the grasshopper (Schistocercagregaria) is reported to comprise 76% of DW and that of tropical house crickets (Gryllodessigillatus) around 70% of DW, which is similar to the protein content of whey (~87% of DW) and chicken eggs (~82.1% of DW) [22]. In terms of the essential amino acids methionine and cysteine, house crickets contain the daily intake recommended by World Health Organization (WHO) [20]. Iron and zinc are very important micronutrients for human nutrition and insects are rich in minerals. For example, grasshoppers contain about 8 mg/100 g iron, which is higher than the iron content in beef (~6 mg/100 g). Fat content has a direct impact on the total energy of food. Whole milk powder contains about 26% fat [23]. Mealworms, which contain around 25% fat [24], can thus be considered a rich source of fat, and therefore of energy (Figure 2). 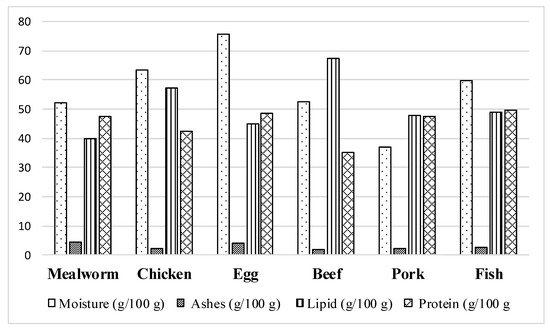 Figure 2. Comparison of the nutritional content of yellow mealworm larvae and conventional foods. Ashes, lipids and protein values based on dry weight. Source: Based on data from Alves et al. (2016).

Nutritional values are of high importance, but for steady intake a food has to be acceptable from a sensory perspective. Use of insects as food is not common in the Western world, so consumers need to be convinced not only by their nutritional benefits, but also by their tastiness and general sensory appeal [25][26]. In cultures where they are eaten, most food insects are considered a delicacy, but they do not all taste the same and different species have the potential to serve different gastronomic functions [27]. In their book ‘On Eating Insects’, Evans et al. [27] compiled information on some edible insects and descriptions of their taste/flavor (Table 1). Books containing recipes for cooking insects have been published (e.g., Van Huis et al. [28] and Evans et al. [27]), but there is still a lack of information on how different insects react as ingredients and how a dish is tasting.
Table 1. Some edible insects and descriptions of their sensory properties.
Refs. [27][29].
One factor to be taken into consideration is that most insects contain unsaturated fat. It is well known that unsaturated fatty acids can easily become rancid and that anti-oxidative processes and ingredients can delay rancidity development [30]. A recent study showed that rancidity had a negative impact on eating quality [31].

4. Insect Foods and Its Acceptance

Insects are prepared and eaten in different forms (Table 2) such as
a. Whole insect
Some insects, such as crickets, can be eaten whole after cooking [32]. Mealworm larvae may also be eaten whole after boiling [33].
b. Dried and milled
Insects can be also be dried and milled (see Figure 3), and then added to different types of food products, e.g., frankfurters, to enrich them in protein or other nutrients [34].

Figure 3. Yellow mealworm larvae (A) freeze-dried whole and (B) milled and freeze-dried. Photo by Xue Zhao, SLU, Sweden.
c. Added fresh to food products after killing, without drying
Processed foods such as burgers can be prepared from fresh mealworms by adding them whole to beef [33].
d. As extracted nutrients
The nutrients in insects can be extracted and added to foods. For example, Zhao et al. [13] extracted and characterized mealworm protein for the purpose of adding it to food products in order to enrich them with protein.
Table 2. Summary of some insect species that are eaten as food.
A study analyzing the nutritional value of yellow mealworm larvae found that it had good protein quality in terms of amino acids [46]. However, the acceptance of eating insects can be a challenge among consumers, especially in Western countries where insects are considered disgusting [8], and commonly associated with diseases and treated as pests [47]. This may be attributable to neophobia, a fear of eating novel foods. In the Western world, the aversion to eating insects is often culturally conditioned and based on neophobia and/or the perception that insects are disgusting, rather than on actual sensory experiences [48][49]. This means that finding enough people to participate in sensory tests of food made from insects can be a challenge in itself. Thus sensory tests may need to be performed using subjects whose culture involves eating the insect species to be tested, because they will not have a phobia about eating the insects that could affect the results of the sensory test. Some studies have conducted sensory evaluations on foods made from yellow mealworms to test the acceptability [33][34][46], but these studies are limited. An early study showed that the texture and flavor of a tortilla made from maize supplemented with yellow mealworm larvae powder was acceptable to consumers, so the inclusion of yellow mealworms in other types of food may be a promising option [46].
Food is sometimes enriched by adding only the extracted protein from mealworms [13]. However, in the study by Aguilar-Miranda et al. [46] cited above, whole mealworm larvae powder was added. A study in Belgium evaluated the taste, appearance, flavor, and overall liking of burgers made from beef, mealworm/beef, lentil, or mealworm/lentil and found that the burger made from mealworm/beef was acceptable in terms of the taste, being second to beef in terms of acceptability [33]. In a study in Korea, the flavor and taste of muffins enriched with up to 8% mealworm powder were found to be acceptable to tasters [34].
Other studies have added some flavor, such as chocolate, to mealworms and have found that this improves the appeal of mealworm-based products [50]. A study in the Netherlands found a correlation between acceptability in terms of texture and flavor, and willingness to buy foods made partly from mealworms [51]. That study also found that the willingness to buy meatballs made from mealworm decreased after tasting. This may indicate that theoretical acceptability in terms of a willingness to buy insect-based foods, without actually tasting the insect product, may not always reflect the real outcome. This means in turn that sensory tests of food made from mealworms are required to reveal the true acceptability. The type of food matrix and the percentage of mealworm added are important factors controlling consumer acceptability. For example, in a study in which the pork in Frankfurters was replaced with mealworm, replacing up to 10% of pork was acceptable, but a higher percentage replacement rate resulted in increased off-flavor and reduced juiciness of the product, which was deemed undesirable [34]. Thus, the addition of mealworms does not always increase the desired characteristics of food products.

More
© Text is available under the terms and conditions of the Creative Commons Attribution (CC BY) license (http://creativecommons.org/licenses/by/4.0/)
Upload a video for this entry
Information
Subjects: Food Science & Technology
Contributor MDPI registered users' name will be linked to their SciProfiles pages. To register with us, please refer to https://encyclopedia.pub/register :
Karin Wendin
View Times: 58
Revisions: 2 times (View History)
Update Time: 05 Jul 2021
Table of Contents
1000/1000
Hot Most Recent