Submitted Successfully!
Thank you for your contribution! You can also upload a video entry related to this topic through the link below:
https://encyclopedia.pub/user/video_add?id=11612
Check Note
2000/2000
HSV1’s Role in AD/Dementia
Edit
This entry is adapted from 10.3390/vaccines9060679

The review  describes studies on the following: relationship of HSV1 to AD using neural stem cells; the apparent protective effects of treatment of HSV1 infection or of VZV infection with antivirals prior to the onset of dementia; the putative involvement of VZV in AD/dementia; the possible role of human herpes virus 6 (HHV6) in AD; the seemingly reduced risk of dementia after vaccination with diverse types of vaccine, and the association shown in some vaccine studies with reduced frequency of HSV1 reactivation; anti-HSV serum antibodies supporting the linkage of HSV1 in brain with AD in APOE-ε4 carriers, and the association between APOE and cognition, and association of APOE and infection with AD/dementia.

The conclusions are that there is now overwhelming evidence for HSV1’s role—probably causal—in AD, when it is present in brain of APOE-ε4 carriers, and that further investigations should be made on possible prevention of the disease by vaccination, or by prolonged antiviral treatment of HSV1 infection in APOE-ε4 carriers, before disease onset.

In 2017, I emphasised the steady increase in the number of publications supporting directly or indirectly the involvement of herpes simplex virus type 1 (HSV1) in Alzheimer’s disease (AD) [1]. Since then, the number has increased further and so greatly that it is not possible in a review of reasonable and digestible length to discuss all or even many of the more recently published papers. In an attempt to manage the super-abundance of evidence for HSV1’s role, I have described only those studies that concern specific features of AD or specific relevant factors; of course, that precludes mention of the most original papers as, by definition, they could not be categorised. I must, therefore, apologise for omitting a number of interesting and important studies.
To reiterate the concept of a role for HSV1 in AD, much evidence indicates that HSV1 can enter the brain, probably in middle age, and can reside there in latent form. Stress, inflammation, and other events can lead to reactivation of the virus, causing a productive infection and consequent damage which, it is suggested, is likely to be greater in people who carry the type 4 allele of the apolipoprotein E gene (APOE-ε4). Recurrent reactivation causes cumulative damage, leading eventually to AD. The conclusion was that HSV1 in brain, in combination with carriage of an APOE-ε4 allele, confers a high risk of developing AD. HSV1 alone, i.e., HSV1 in brain of non-APOE-ε4 carriers, confers a much lesser or no risk. Our finding that in the peripheral nervous system, APOE-ε4 is a major risk factor for cold sores (herpes labialis) provided strong indirect support for this conclusion [2].
Some articles which appraise the concept appear to have certain misunderstandings or misconceptions, so it seems necessary to refute them yet again: firstly, there is often lack of awareness that “controls” can be infected but asymptomatic, i.e., that infected does not necessarily mean affected, so that broadly similar values of frequency/prevalence of a microbial infection in controls and diseased subjects do not preclude a role for that microbe in the disease. Host genes or other factors might well determine response of an individual to a microbe or agent. For example, at least 80% of people are infected with HSV1 but only about one fifth of them suffer from cold sores: the other four fifths, being asymptomatic, would be listed as controls. Secondly, it is sometimes stated that AD patients are more susceptible to infection with HSV1 than controls - but this is vitiated by the fact that the prevalence of HSV1 in brain is not much lower in controls than in AD patients [2]. Thirdly, the idea that APOE-ε4 carriers are more likely to be infected with HSV1 is demonstrably incorrect: 80+% of most populations are infected with the virus but only some 25–30% are APOE-ε4 carriers.

Several very useful studies have been carried out using differentiated stem cells. Aiuto et al. [3] used HSV1-infected 2D and 3D cultures of neuron-like human induced pluripotent stem cells (hipsc) derived from skin fibroblasts as a model for HSV1–human–CNS interactions. The authors found that the cells were permissive for HSV1 infection, that a quiescent state resembling HSV1 in animal models could be established, that in the 3D cultures the virus travelled from the periphery to the centre of the structure, and that reactivation from the quiescent state could be achieved. Reactivation was less efficient in the 3D cultures compared with the 2D cultures, thereby resembling the lesser frequency of reactivation in the CNS compared to the PNS, in lab animals infected with HSV1. Reactivation caused neurodegeneration of neuronal processes and cell-cell fusion, which led to the formation of neuronal syncytia.
In a later study, the same group [4] found different patterns of beta amyloid 42 (Aβ42) accumulation in HSV-1 infected 2D and 3D neuronal cultures. The 2D neuronal cultures showed Aβ42 almost always in HSV1-infected cells (detected by staining the major HSV1 transcription factor, immediate early ICP4 (infected cell polypeptide 4, a marker of HSV1 replication) or in infected cells exposed to antivirals, whereas 3D brain organoids showed Aβ42 mainly in non-infected cells surrounding HSV1-infected cells. The authors suggest that because brain organoids better evoke the features of a developing brain than 2D cultures, they provide a more suitable model for investigating the involvement of HSV1 in AD pathology.
Cairns et al. [5] recently set up a novel and exciting 3D bioengineered brain model using human-induced neural stem cells (hiNSCs), of APOE-ε3/4 genotype (D. Cairns and D. Kaplan, personal commun.), to examine the effects of HSV1 infection relating to AD. These stem cells spontaneously differentiate into multiple neuronal and glial subtypes and do so rapidly—after only about 4 days. The authors stated that the system allows visualization and quantification of neurite patterning and networks and electrophysiological readouts in real time They found that on infection, the model mimics human disease, with multicellular amyloid plaque-like formations, gliosis, neuroinflammation, and decreased functionality (Figure 1) in that there was significantly less electrophysiological activity, comparable to the impaired functionality of AD patients. The authors stressed that these AD-like changes occurred in the absence of any exogenous mediators that might regulate or induce AD. Further, addition of the antiviral valacyclovir (VCV) reduced the magnitude of the changes, relating more directly to antiviral effects on infected brain than did previous studies using Vero cells. Their AD model strongly supports a causal role for HSV1 in brain (with APOE-ε4) in AD and supports also the earlier studies on antivirals by the present author’s laboratory ([6] et seq.). 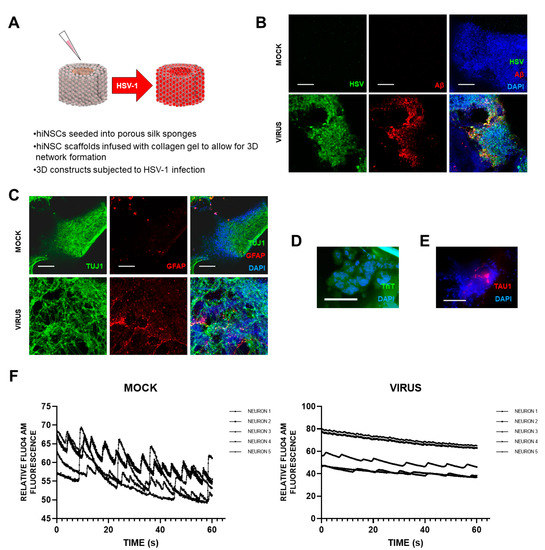 3. Usage of GV971 to Treat AD and the Case for Using a Related Compound, Fucoidan

The study by Cairns et al. [5] strongly supports the use of antiviral treatment for AD patients, and a clinical trial of VCV to treat AD patients is ongoing at Columbia university. Another clinical trial treating AD patients, described by Cummings et al. [8], is yielding encouraging results: a phase 2 trial of GV971, a compound derived from brown algae which consists of polysaccharides—linear sodium oligomannate molecules—of a range of sizes. This, they suggest, may reduce brain inflammation as well as systemic inflammation through effects on the gut microbiome, and very recently, the positive results of a phase 3 trial of GV971 have been reported by Xiao et al. [9]. The latter authors stated that GV971 demonstrated significant efficacy in improving cognition, with sustained improvement across all observation periods of a 36-week trial, and it was safe and well-tolerated. However, an alternative—or perhaps additional—mechanism might operate via the drug acting as an antiviral agent against HSV1 [10]. Marine-derived polysaccharides have been shown to have a variety of bioactivities, including antiviral effects [11], and anti-bacterial effects.
The antiviral activities of the marine-derived polysaccharides are usually related to the specific sugar structure, molecular weights and their degree of sulfation. (On enquiry, the present author was told by the Company, Green Valley, that GV971 was not sulphated, so she recommended that they assess a sulphated version for possible future usage as treatment for AD.) Fucoidans (known also as fucans), a group of polysaccharides derived also from brown algae, are sulphated fucans; they have long been used as food supplements because of their apparent protective action against various illnesses. They have both antiviral and virucidal activity against HSV1 [12], their mechanism of action being attributed to their inhibiting the initial attachment of the virus to the host cells. The inhibition is probably mediated by interactions of the fucoidans with positively charged domains of the viral envelope glycoproteins, which direct the attachment of the virus to heparan sulphate proteoglycans on the host cells’ surface.
Sulphated fucans were found to be very effective in reducing the levels of Aβ and especially AD-like tau (P-tau) produced in cultured cells infected with HSV1, the activity of the fucoidan derived from Undaria pinnatifida against the HSV1-induced production of Aβ and P-tau being particularly effective [13]. Further, when the fucoidan was added to infected cells together with the most commonly used anti-HSV antiviral agent, acyclovir (ACV), which interferes specifically with viral DNA replication, the combined effect was synergistic—appreciably more effective than either agent alone in decreasing levels of P-tau and Aβ. Presumably, fucoidan reduced the number of viruses entering the cells and, in the case of those viruses that did manage to enter, ACV then inhibited the replication of their DNA
As to fucoidan’s usage, an in vitro study suggests that it might well combat SARS-CoV-2 also: Kwon et al. [14] investigated the relevant antiviral activity of fucoidan and other highly sulphated polysaccharides, as well as heparin, heparan sulphates, and other glycosaminoglycans(GAGs), based on their finding that heparin has exceptional binding affinity to the spike protein (S-protein) of SARS-CoV-2 They used Vero cells, which express ACE2, the SARS-CoV-2 virus receptor, and measured the binding of the above compounds to the SARS spike protein CoV-2 S-protein by surface plasmon resonance. Fucoidans extracted from the seaweed Saccharina japonica and chemo-enzymatically synthesized derivatives of heparin as well as heparin itself were found to have significant antiviral activity. The authors, therefore, suggested that as SARS-CoV-2 infects a wide range of tissues that have adequate ACE2 levels, including the nose and the gastrointestinal tract, potential delivery of these substances, including the fucoidans, could be through a nasal spray, metered dose inhaler, or oral delivery. They added that the fucoidans, when taken orally, are considered “Generally Recognized as Safe”.

More
© Text is available under the terms and conditions of the Creative Commons Attribution (CC BY) license (http://creativecommons.org/licenses/by/4.0/)
Upload a video for this entry
Information
Subjects: Neurosciences
Contributor MDPI registered users' name will be linked to their SciProfiles pages. To register with us, please refer to https://encyclopedia.pub/register :
Ruth Itzhaki
View Times: 42
Revisions: 3 times (View History)
Update Time: 05 Jul 2021
Table of Contents
1000/1000
Hot Most Recent