Submitted Successfully!
Thank you for your contribution! You can also upload a video entry related to this topic through the link below:
https://encyclopedia.pub/user/video_add?id=11602
Check Note
2000/2000
Yeast Cells in Microencapsulation
Edit
Upload a video
This entry is adapted from 10.3390/molecules26113123

2. Yeast Cells and Their Barrier Structures

Yeast cells feature an external cell wall and an inner membrane surrounding its intracellular environment, as shown in Figure 1. 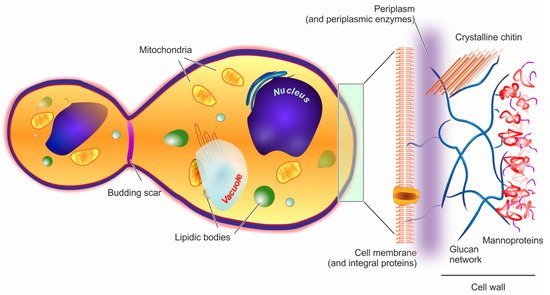 Figure 1. In the structure of a yeast cell (here represented in a post-budding state), the elements potentially acting as barriers to encapsulation (cell wall and cell membrane) are depicted in a magnified fashion on the right hand side of the figure.
Cell wall. In yeast, the wall accounts for approx. 15–20% of the cell dry mass. Its thickness is very variable (70–200 nm), since it increases in response to compression or osmotic forces [67]; structurally, however, it is always a highly polar double-layered matrix (a kind of hydrogel). Its inner part is mainly composed of branched β-(1,3) and β-(1,6) glucans (about 50% of the overall wall) [68] hydrogen-bonded to 3–4% of mostly crystalline chitin [69]. This inner layer is likely to be the main contributor to the overall mechanical resistance of the whole cell wall [70]. The outer layer consists chiefly of mannoproteins, which are negatively charged proteins highly N- or O-glycosylated with mannose or mannosyl phosphate residues linked by 1,2-, 1,3-, 1,4- and 1,6-α-linkages (the latter mostly composed of short chains typically referred to as mannan) [71]. Mannoproteins are the main contributors to the cell wall surface properties, for example, the anionic mannosyl phosphate residues determine the yeast cell surface charge [72] and their reduction in number determines an increase in its hydrophobicity [73]. Furthermore, through their covalent linkage to the β-glucan layer, mannoproteins contribute to the wall outer porosity [74], and above all to yeast adhesion, for example, the C. albicans adhesins that allow its binding to oral epithelial cells are all mannoproteins [75].
Of note, the overall wall composition is rather constant throughout the different yeast species [76], and that of S. cerevisiae can be considered as representative for almost all Ascomycetes [77]; it must be pointed out, however, that although the main components are preserved, the actual detailed composition is not at all simple, with about 1200 genes having being linked to a role in the cell wall [78].
Plasma membrane. It is composed in equal parts of lipids (mainly glycerophospholipids and fatty acids, with a smaller quantity of sterols such as ergosterol and sphingolipids) and proteins, and is connected by glycoproteins and glycolipids to the cell wall, from which it is separated by a non-continuous, enzyme-rich region known as the periplasm. The membrane main functional role is the regulation of the transport from/to the cell. [79] In the outer part of the membrane, phosphatidylcholine, phosphatidylethanolamine, phosphatidic acid, and sphingolipids are mostly found, while the more negatively charged phosphatidylserine and phosphatidylinositol are mostly present only in the inner membrane [70]; as in mammalian cells, lipid rafts are commonly observed, and have important roles in protein segregation and localization [80], which in turn have crucial effects in cell growth and death [81], or mating and division [82].
Intracellular ultrastructure. The yeast interior is compartmented into a nucleus, one or, more commonly, several vacuoles, mitochondria, the endoplasmic reticulum, and a number of vesicular bodies that include peroxisomes and oxisomes. It is worth noting that vacuoles are large (sometimes similar in size to nuclei), mildly acidic (pH 6–6.5) vesicles, whose functions in both storage and stress response/digestion bear some functional analogies to mammalian lysosomes/autophagosomes [83][84].

More
© Text is available under the terms and conditions of the Creative Commons Attribution (CC BY) license (http://creativecommons.org/licenses/by/4.0/)
Upload a video for this entry
Information
Subjects: Biochemistry & Molecular Biology
Contributor MDPI registered users' name will be linked to their SciProfiles pages. To register with us, please refer to https://encyclopedia.pub/register :
Nicola Tirelli
View Times: 68
Revisions: 2 times (View History)
Update Time: 02 Jul 2021
Table of Contents
1000/1000
Hot Most Recent