Submitted Successfully!
Thank you for your contribution! You can also upload a video entry related to this topic through the link below:
https://encyclopedia.pub/user/video_add?id=11546
Check Note
2000/2000
Raptor Conservation
Edit
This entry is adapted from 10.3390/birds2020014

The recognition of a species’ ecosystem services and disservices (henceforth we use ‘(dis)services’ to indicate services and disservices as a group) will depend on the context of the species’ interactions with humans. For example, by consuming carrion, vultures provide an essential service to human societies where they remove decaying carcasses and animal wastes [1]; however, the same vultures may be viewed negatively by farmers who witness the birds feeding on dead or dying livestock [2][3]. Although the ‘actual’ values ascribed to a species’ ecosystem (dis)services can be estimated (albeit with great difficulty), the values as ‘perceived’ by stakeholders are often highly influenced by cultural (dis)services derived from the species, including culturally-based perspectives on the species [4][5][6][7]. Such (dis)services may be proximally linked to contemporary estimated values of the species’ ecological services or to past experiences with the species, but they may also be related to distant, historical interactions that have influenced the cognitive orientation of societies and cultures [8]. A species’ cultural service might also be completely detached from the ‘true’ values of its (dis)services because of its cultural symbolism in folklore, mythology or religion. As such, a species that bestows beneficial ecological services might be regarded as prejudicial or a nuisance, and a species with associated ecological disservices regarded as beneficial or valuable depending on the stakeholder’s cultural perspective [7].
Despite the often-intangible nature of cultural services, which are specific to cultures and subcultures, including demographics within societies, political and social groups, educational level and even specific genders [9][7][10][11][12][13][14][15], attempts have been made to estimate the values (henceforth value estimates) of these services in monetary terms. As an initial step towards value estimation, the cultural services derived from a species can be placed into one or more categories: these include the physical and experiential uses of the species, the intellectual and educational uses of the species or the spiritual and symbolic roles of the species [16][17][18]. In the context of raptors, certain cultural services can be variously linked to more easily quantifiable provisioning services. For example, the trade in raptors is sometimes associated with raptors’ physical and experiential use, and the use of raptor feathers, claws or bones can be linked to certain religious or cultural practices (e.g., as ornamentation in traditional dances, or ingredients in traditional medicines [8][19][20][21][22]). We regard these latter as ‘physical spiritual, emblematic or artistic’ uses (henceforth ‘physical-symbolic’). Finally, raptors will often provide significant spiritual, emblematic or artistic services that are entirely representative without any direct physical association with the birds (i.e., representative spiritual, emblematic or artistic [23][24]—henceforth ‘representative-symbolic’).
Cultural value estimation is often based on evidence of the willingness to pay for services, either directly or indirectly. For example, donations to raptor conservation organizations may be regarded as payments for raptor-related cultural services. The cultural value of raptors in tourism can be partially estimated using information on the distances travelled by bird watchers to arrive to nature reserves and raptor viewing locations (indirect measure), by recording expenditure related to bird-watching equipment (indirect) or as entrance fees to raptor viewing sites or to raptor shows (direct) [25][26][27]. Based on these examples, it is clear that monetary value estimations are more easily associated with the physical and certain experiential uses of the species. Furthermore, representative-symbolic uses of wildlife might best be valued in terms of their proportional contributions or key placements in aspects of culture—including the nature of their roles in governing emotions, or in nurturing a sense of identity or a sense of nationhood. The value estimates of cultural services might therefore be more qualitative than quantitative [28][9][29]. Documenting and recording such cultural services is, nevertheless, an important exercise because cultural services can ultimately determine the nature of human individual and community interactions with raptors, and whether such interactions are likely to be beneficial or prejudicial to the raptors [12][29][30].
Regarding raptor conservation as a service from human societies to ecosystems (i.e., societies services to ecosystems [31]), cultural services may be expected to play a major role in the implementation and success (or lack of success) of conservation actions [32][25][33]. As indicated in Figure 1, cultural ecosystem (dis)services will be directly linked to the ‘supporting (dis)services’ that underlie conservation management of ecosystems. Typical supporting services to ecosystems might include conservation policy as derived and directed from society’s appreciations of Nature, from society’s ethical understandings of Nature’s intrinsic rights and from stakeholder’s religious or cultural connections to landscapes or species, including those derived from sense of place, heritage and emblems [31]. Each of these supporting services is closely connected with cultural knowledge of species and beliefs related to the species. In a recent review by Horgan and Kudavidanage [34], the success of conservation projects as indicated by the restoration of species populations, the protection of habitats or the reduction of negative impacts on wildlife was frequently associated with tangible benefits to communities. These tangible benefits included payments for ecosystem services, community participation in conservation planning and/or clear community incentives for conservation actions. Community incentives are often related to projected monetary gains through, for example, ecotourism, including gains for private-sector businesses [26][35]. However, community incentives related to other, non-tangible gains (e.g., satisfaction of place, sense of endowment and feelings of connectedness with ancestors) from conservation actions are seldom considered in project reporting. 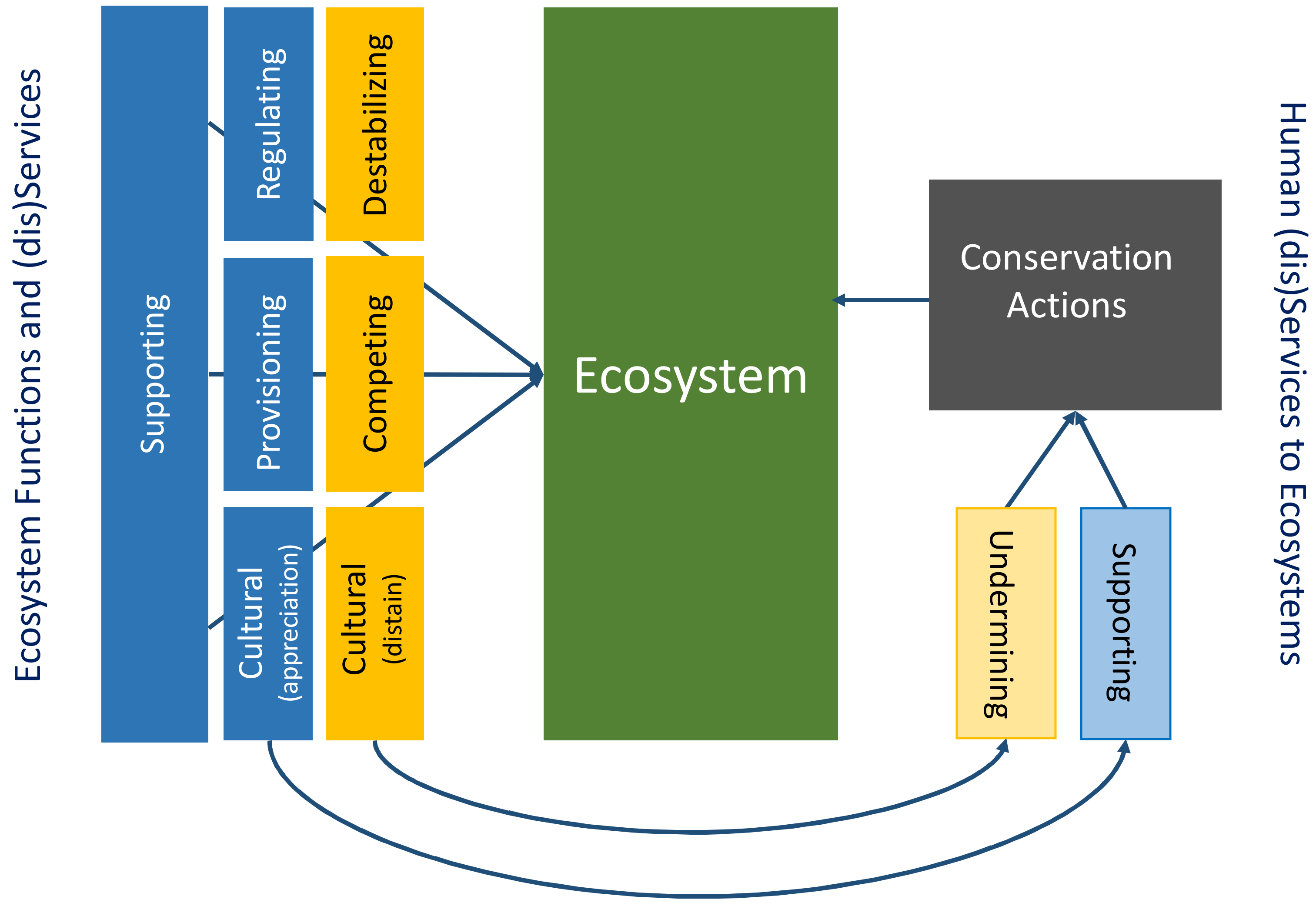 Figure 1. Supporting, provisioning and regulating ecosystem services and associated cultural ecosystem services as proposed by the Millennium Ecosystem Assessment (blue symbols). Note that provisioning and regulating ecosystem services have potential corresponding disservices for human societies (orange symbols). Nature can also provide cultural ecosystem disservices (e.g., the cultural disapproval of some species due to an unappealing appearance or behaviour). Human societies also affect the health, welfare and status of species through services to ecosystems that may be positive (e.g., conservation) or negative (e.g., exploitation). The nature of these ‘services to ecosystems’ is determined by supporting (dis)services that can be pastoral (light blue symbol) or exploitative (light yellow symbol). Note that cultural ecosystem (dis)services are directly related to supporting (dis)services from human societies to ecosystems.

2. Cultural Perspectives on Raptors and the Impact on Conservation

As depicted in Figure 2, there are at least eight possible positive or negative service-knowledge-belief combinations determining associated positive and negative appreciations of species. These eight possible combinations are referred to here as ‘scenarios’. Each scenario might have predominantly positive of negative consequences for conservation. However, it is predicted that provisioning (dis)services (both beneficial and prejudicial) will override knowledge and beliefs to affect outcomes (community actions), particularly among economically disadvantaged stakeholders and in developing countries, and that beliefs will override knowledge during implementation at community levels in both developed and developing countries. As indicated in Figure 2, all raptor species have benefits for Nature (ecosystem functions), but that there may be cases where certain raptors are either beneficial or prejudicial to society (ecosystem (dis)services). There may also be cases where prevailing knowledge has viewed a raptor species in predominantly negative terms (i.e., erroneously regarding a species as invasive or damaging to livestock), but that this view would later change (indicating a science or knowledge bias that was later rectified) to finally recognize prevailing benefits. Examples might also exist of cases where prevailing knowledge underestimates some disservice. Such knowledge biases may be easily corrected in scientific records or in policy, but might linger in cultural memories. Finally, regardless of whether science holds a species as beneficial or prejudicial, cultural beliefs, based on emotion or past experience might alter that view to either reinforce or reverse science-based information. 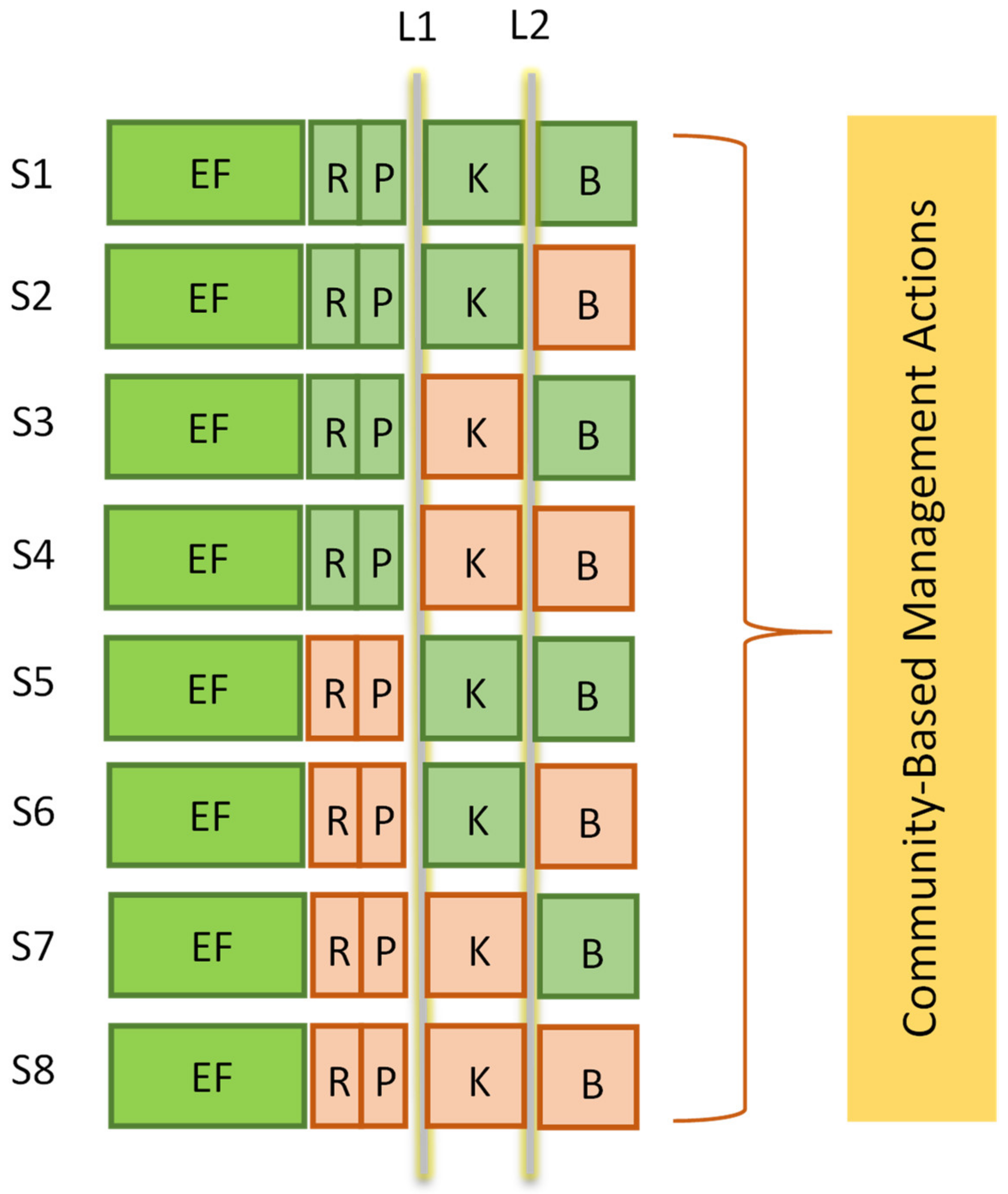 Figure 2. Eight potential service-knowledge-belief combinations (scenarios) that might produce barriers or pathways to conservation. Green symbols indicate ecosystem functions (EF), regulating (R) or provisioning (P) ecosystem services, and knowledge-based (K) or belief-based (B) cultural services; orange symbols are corresponding regulating, provisioning or cultural disservices. L1 is the knowledge lens and L2 the belief lens. Provisioning (dis)services (P) are positioned closer to the supporting services (K and B) to indicate a greater influence on stakeholder appreciations of species; however, the order of R and P may differ between stakeholders and do not necessarily have similar positive or negative values. Combinations with ‘neutral’ values are not included—although examples of stakeholders indicating ‘no knowledge’ and/or expressing ‘no beliefs’ are common in social studies related to specific raptors.

The recognition and documentation of raptor cultural (dis)services, and a linking of such (dis)services to tangible provisioning (dis)services either within or among stakeholder groups can be used to inform conservation practitioners and thereby support implementation. There are recurring service-knowledge-belief patterns related to raptors that can result in sometimes predictable outcomes for raptor conservation. There are also links between knowledge, practices and beliefs from different stakeholders, who often have very different appreciations and perceptions of raptors, to either support or counter conservation efforts. Therefore, the application of social science and ethnobiological approaches to the conservation of raptors and other wildlife requires continuing research attention because very often, it is cultural norms, not policy, that ultimately determine the nature of human-raptor interactions in rural and urban landscapes throughout the world.

More
© Text is available under the terms and conditions of the Creative Commons Attribution (CC BY) license (http://creativecommons.org/licenses/by/4.0/)
Upload a video for this entry
Information
Subjects: Biodiversity Conservation
Contributor MDPI registered users' name will be linked to their SciProfiles pages. To register with us, please refer to https://encyclopedia.pub/register :
Finbarr Horgan
View Times: 89
Revisions: 2 times (View History)
Update Time: 01 Jul 2021
Table of Contents
1000/1000
Hot Most Recent