Submitted Successfully!
Thank you for your contribution! You can also upload a video entry related to this topic through the link below:
https://encyclopedia.pub/user/video_add?id=1154
Check Note
2000/2000
Camel husbandry
Edit
Upload a video
This entry is adapted from 10.3390/ani10050780

Minor species such as camels are lacking for transactional agreements between applied research and regulatory agencies in regards of animal welfare. Given these species being progressively recognized as sustainable livestock even under extreme environmental conditions, camel international science has brought about valuable academic efforts towards its functional revalorization but not updated policy reforms. By means of bibliometrics analysis, camel science upturn and its academic and societal impacts were evaluated to highlight the potential promoting factors for camel research advances and specific parallel law enforcing. Historical camel referring documents that were indexed in ScienceDirect directory from 1880-2019 were considered. Camel as a species did not aﬀect research impact (p > 0.05) despite the journal, author number, corresponding author origin, discipline and publication year aﬀecting it (p < 0.001). However, camel welfare-related laws remain scarcely available. In this framework, research advances must play a cardinal role in influencing business stakeholders and animal welfare advocacies to promote sustainable camel husbandry practices through science-based law enforcement in this emerging industry on a global scale.

Camels (Camelus dromedarius or one-humped camel, Camelus bactrianus or two-humped camel and the wild species Camelus ferus) may have been the most ignored species compared with other domestic livestock from a productive, political or socioeconomic perspective. Fortunately, their international relevance has progressively increased due to their recognition as a multifunctional resource for humans with very low maintenance requirements even under extreme environmental conditions [1][2][3]. Additionally, the biomedical applications of some of their derived products [4] and their potential for animal-assisted therapeutics [5], are reinforcing criteria for such emerging camel cultural relevance and social appreciation.

These growing economic interests in camel husbandry experienced during the past three decades [2] has led to an increase in the academic actions implemented and which deal with almost any discipline applied to the species (Figure 1). This academic upturn is simultaneous to an increase in worldwide camel census [6][7] and ratiﬁed by the upward positive trends in camel science impact specially since the beginning of the present century (Figure 2). The year of publication factor reported signiﬁcant diﬀerences (p < 0.005, df = 85, as no impact factor had been registered for any of the journals before 1992) between the academic impact from papers published in the early and mid-20th century and those published since 1990 (especially those from 2000 to 2019). 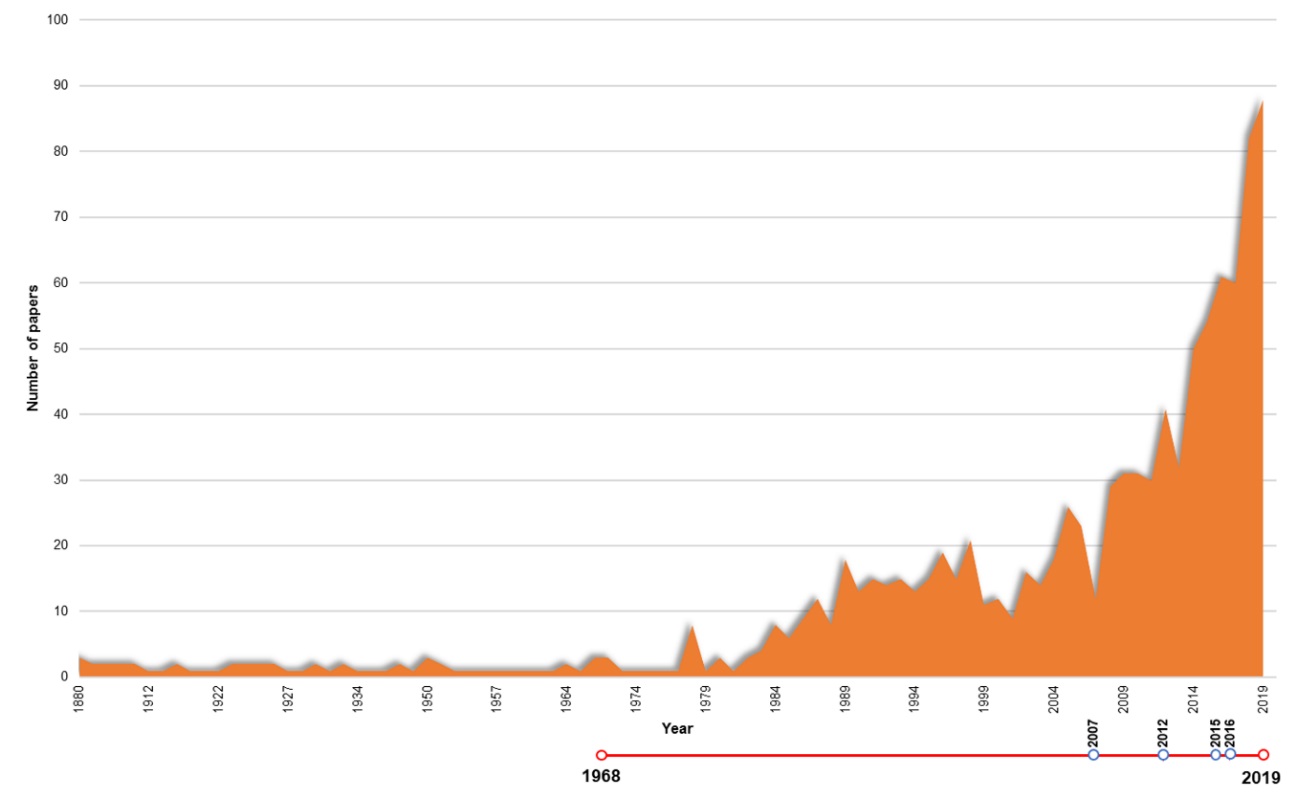 Figure 1. Number of camel research publications from 1880 to 2019. Timeline is represented below the graph in red, with blue-contoured spots marking the moment of release of a regulation document. 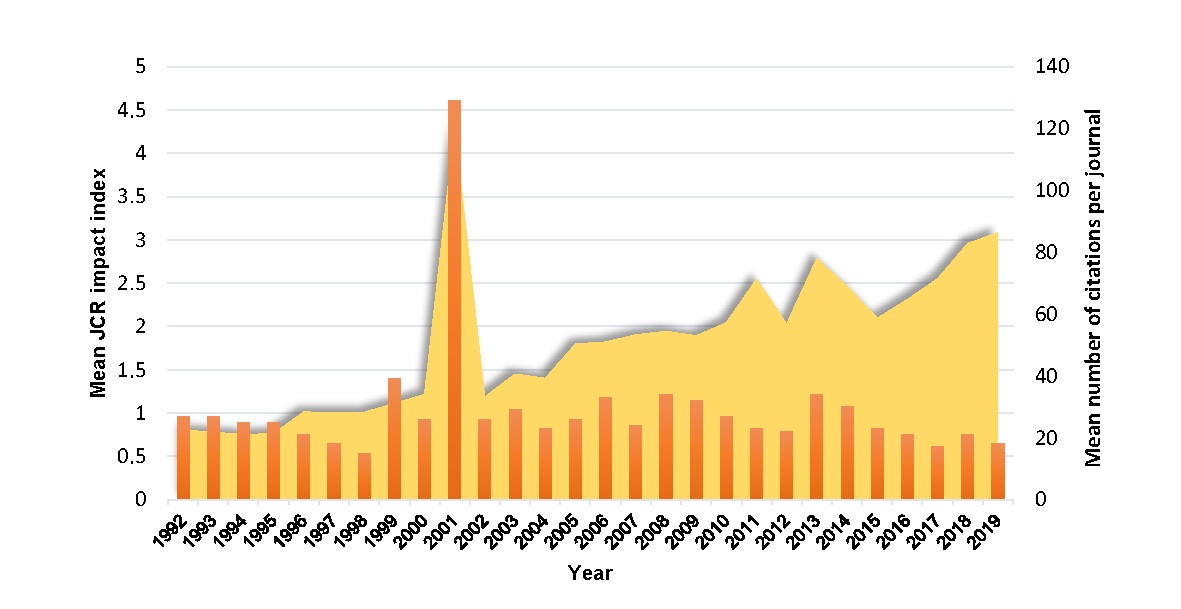 Figure 2. Mean JCR impact index and mean number of citations per year between 1992 and 2019.

The countries that first paid attention to these animals’ productive potentialities and addressed challenges/constraints in camel commercial distribution chain, were those in which a previous tradition forged in camel breeding and production existed, with the beneﬁts derived from the species occurring at both an economic and socio-cultural level [8]. Signiﬁcant diﬀerences (p < 0.05, df = 55) were found between academic impact for papers whose corresponding author were from central and north-east European and those coming from Asian and North African countries. That is, eastern Africa and Middle Eastern countries reached both the higher number of publications (Figure 3) and mean impact indexes. In this context, demographics, institutional prestige of the corresponding author, the involvement in world-level cooperating projects, the number of authors and their degree of specialty, could also act as potential conditioning factors for submitted manuscript outcomes [9]. 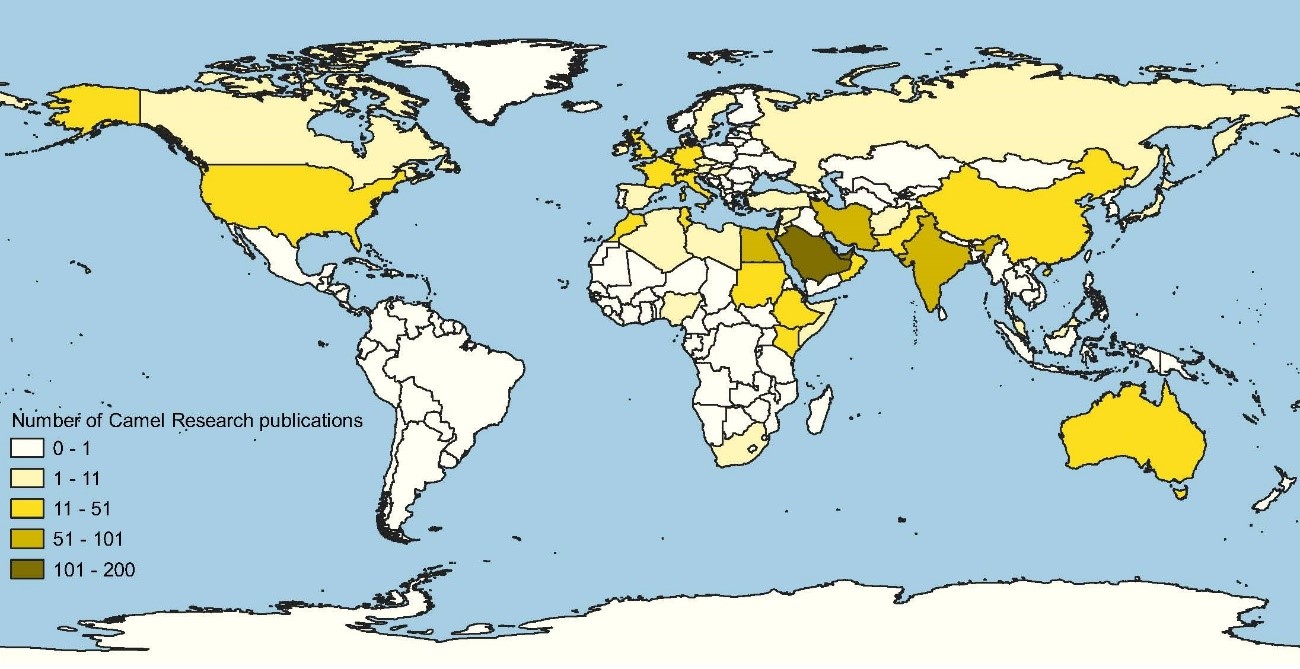 When camel species conditioning eﬀect was examined, this factor appeared not to statistically significantly influence research impact in camel science. Nonetheless, if frequencies are compared, the number of publications for which Camelus dromedarius was the species studied was substantially higher than those for Camelus bactrianus and Camelus ferus. This could be explained by the existence of a greater number of animals in the African continent in agropastoral systems according to published censuses [10], which allow the scientific community access to a high number of domestic dromedaries and facilitate its management and planning of cooperative research studies.

Regarding the average impact among research topics, the greatest advances in camel international research were produced in the areas of Food Science and Technology, Camel Health (Infectious and Parasitic Diseases), Camel Reproduction and Clinical and Biomedical Research. For the latest, as an emerging research topic due to its radical novelty and relatively fast growth, the number of published papers were high but their academic impact remains low. This finding remarks the need for standardization of related methodologies as a previous step for increase the visibility of this promising research field within the scientific community and the success of the therapeutical applications of camel derived products. Figure 4 shows the frequency distribution of speciﬁc topics in camel international research.

In summary, widely applied scientiﬁc knowledge about anatomy, physiology and pathology in camels can be found in the literature. Instead, topics such as nutrition, ecology, behavior physiology, genetic management and production are scarcely approached [11]. In turn, planned research and codes of action on the best handling practices ensuring a suﬃcient welfare status in these animals are scarce and shallow [12], that can be ascribed to the close relationship between animal wellbeing and food-producing systems and the emerging scenario of this industry. In other words, camel production-related topics must be urgently reoriented and assessed due to production–health–welfare complex interactions.

Social awareness is grossly aﬀected by science and vice versa, as the binomial science–society is immersed in a process of diachronic evolution with a suﬃciently proven cultural base. In the absence of quantitative information regarding the level of camel welfare in diﬀerent housing systems, intentional harming acts and basic needs neglect may persist in these species and their productive potential might be devalued.

Aiming to reach a consensus on camel wellbeing, science must primarily revise the existing legislation to identify the changes needed to adapt them to the emerging challenges that this rather overlooked multipurpose species faces nowadays. Thus, research outputs may encourage lawmakers to develop and constantly update oﬃcial mandatory regulations as well as highlight the need for expanded awareness when aiming to meet new societal values and expectations [13].

Speciﬁc regulations and guidance concerning the welfare of reared camels are noticeably limited [14]. The World Organisation for Animal Health (OIE) ‘Terrestrial Code’[15] contemplates camels as livestock and thus has provided concrete welfare recommendations since its ﬁrst edition in 1968 until the present. It defines general protocols and standards for camel transport, their slaughtering process for human consumption and some speciﬁc concerns applicable to speciﬁc diseases. This ‘Terrestrial Code’ includes speciﬁc chapters detailing animal-based criteria or measurables that can be useful indicators of animal welfare for cattle, chicken, equid and pig depending on production systems in which reared, from birth through to ﬁnishing; for camels, this information is lacking.

At a national level, mandatory regulations that categorically include camels as goods-production livestock and promote its welfare were solely endorsed in four countries around the world, from 2007 to 2016 [16][17][18][19]. These national laws present a brief, technical-based approach for basic physiological needs satisfaction and handling practices during transportation and slaughtering, both with farmed and feral camels. Although this limited law enforcement is simultaneous to camel science upturn, such ﬁndings provide again insight into the need for camel international research to be reinforced in closely related topics (production, ecology and behavior physiology). That is because the OIE standards are based on the most recent scientiﬁc articles in light of advances in veterinary science and encourage nationally competent authorities to promote legislative adaptations when necessary.

Under this framework, we conclude that, while innovative legislation is being drawn up, the scientiﬁc community plays a pivotal role when make livestock producers consider the positive effects of animal wellbeing on production rates and the public’s perception of this livestock industry. For this purpose, the countries where camel censuses are significantly higher and the world’s highest-ranked research institutions in camel science, are expected to constitute solid collaborative conventions in camel welfare investigation on a global scale. These consortia could use its direct empirical experience derived from the analysis of large samples to maximize the validity of their conclusive results and thus improve the resultant regulations’ promotion and updating.

More
© Text is available under the terms and conditions of the Creative Commons Attribution (CC BY) license; additional terms may apply. By using this site, you agree to the Terms and Conditions and Privacy Policy.
Upload a video for this entry
Information
Subjects: Zoology
Contributors MDPI registered users' name will be linked to their SciProfiles pages. To register with us, please refer to https://encyclopedia.pub/register :
Francisco Javier Navas González
,
Carlos Iglesias
View Times: 790
Revisions: 2 times (View History)
Update Time: 29 Oct 2020
Table of Contents
1000/1000
Hot Most Recent