Submitted Successfully!
Thank you for your contribution! You can also upload a video entry related to this topic through the link below:
https://encyclopedia.pub/user/video_add?id=11495
Check Note
2000/2000
Laser Wakefield Electron Acceleration
Edit
Upload a video
This entry is adapted from 10.3390/app11135831

Laser wakefield acceleration (LWFA) has attracted much attention since it was proposed in 1979 by T. Tajima and J. Dawson [1] due to its possibility to provide a huge acceleration field for electron acceleration. Thus, LWFA can realize table-top high-energy electron accelerators and be the next generation of electron accelerators with extremely high energy over 100 GeV. However, the proposal was pending for a long time because it required too high a performance for the high-power lasers at the time. As the chirped pulse amplification (CPA) technology [2] initiated the rapid progress of high-power lasers in the 1990s, the short-pulse high-power lasers led to the realization of laser electron accelerations [3][4][5], albeit the quality of the electron beam was not good enough for applications. In 2004, a milestone was laid in LWFA research: a mono-energetic collimated electron beam was achieved in the bubble regime by using an intense femtosecond laser [6][7][8]. Since then, LWFA has been intensively investigated with high-power femtosecond lasers to provide high-quality electron beams and radiation sources [9] for practical applications to non-destructive inspections, ultrafast x-ray spectroscopy, and x-ray microscopy.
Even though LWFA can provide a huge acceleration field, some scientific and technological problems need to be solved for practical applications. First of all, LWFA uses complex nonlinear dynamics of plasma media [10], and its acceleration structure has the dimensions of tens of microns in space and hundreds of femtoseconds in time. Secondly, an intense laser pulse is modified significantly during the propagation through the plasma medium, and the modification of the laser pulse alters the plasma medium and acceleration process as a feedback loop. In addition, the electron injection into the plasma wave spontaneously happens in the plasma, which is called self-injection. Therefore, the whole acceleration process is highly nonlinear and unstable, limiting the electron energy [11][12], beam quality and stability [13][14]. Many studies are ongoing to solve these problems to improve the performance of LWFA.
The advancement of high-power laser technology is essential for the enhancement of LWFA performance. Enormous efforts have been exerted to increase the laser’s peak power and they consequently succeeded in building petawatt (PW) lasers [15]. The development of PW lasers provided a chance to explore a new regime of laser particle accelerations and relativistic laser–plasma interactions. In the last decade, several types of PW lasers have been used in LWFA experiments. A PW laser was demonstrated in Texas university, Austin, by adapting the CPA to an Nd:Glass laser [16]. This hybrid laser had a very low repetition rate, below one shot/hour. The most successful demonstration of PW lasers was based on Ti:Sapphire CPA lasers. These lasers can provide laser energy over 30 J, pulse duration of about 30 fs, and a repetition rate of over 0.1 shot/second [17]. Ti:Sapphire lasers with peak power over PW have been commercialized and installed in several research institutes for relativistic laser–plasma science. As the laser power increases, the achievable electron energy by LWFA has increased by more than an order of magnitude, compared to the first demonstration of the bubble-regime LWFA in 2004. Recently, multi-GeV electron beams were obtained with a centimeter-long medium [11][18][19]; the conventional radio-frequency (RF) acceleration technology requires a few hundred meters for such beams. In addition, many applications of LWFA or radiation sources from LWFA have been demonstrated in the last decade. Therefore, LWFA has the potential for compact linear accelerators and x-ray sources as the next generation of electron accelerators.

In this section, we review the dual-stage LWFA with the PW lasers at the Ultrashort Quantum Beam Facility (UQBF), Advanced Photonics Research Institute (APRI), GIST. The APRI group successfully constructed two PW beamlines in 2012 by using the CPA scheme and Ti:Sapphire amplification media. The first beamline produced energy of 30 J and a pulse duration of 30 fs [17], and the second beamline did 45 J [20] and the same pulse duration. The PW laser at UQBF was used for LWFA experiments to produce multi-GeV electron beams. The achievable electron energy can be increased by increasing the laser power and lowering plasma density. However, the self-injection of electron bunches into plasma waves can be prohibited by reducing the plasma density. Thus, the plasma medium density and profile should be carefully designed to maximize the electron energy: the acceleration length should be maximized while keeping self-injection occurring. One solution can be to combine gas media of different lengths and densities called dual-stage or cascaded acceleration.
The dual-stage LWFA experiments were performed by focusing the PW laser onto a dual gas jet medium consisting of 4-mm and 10-mm helium gas jets [18]. The first 4-mm helium jet acted as an injector stage, and the second 10-mm jet boosted electron energy. Laser pulses with an energy of 25 J were focused with a 4-m long concave spherical mirror, as shown in Figure 1a. The wavefront aberration of the laser pulse was corrected using a deformable mirror installed before the compressor. The laser pulse was stretched to 60 fs with a positive chirp by detuning the compressor grating. 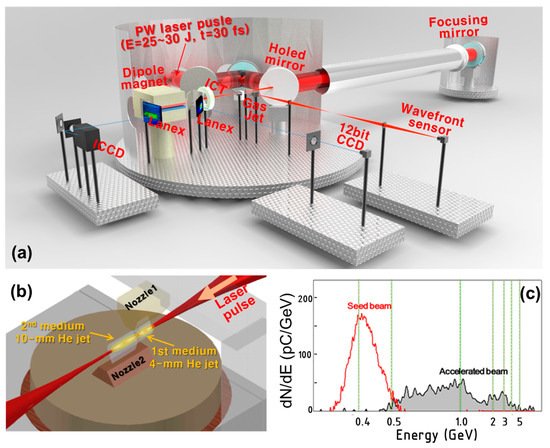 Figure 1. (a) Experimental layout for dual-stage LWFA with a PW laser pulse, (b) schematic drawing of the dual-stage target, and (c) the experimental result with the dual-stage target [18]. In figure (c), the red line shows the electron spectrum from the first target, and the black line shows the spectrum after the second target.
In the dual-stage LWFA, several issues should be properly treated to obtain a high-energy electron beam. Firstly, a self-injection should happen in the first medium, and the resulting electron bunch should have sufficient energy when entering the plasma wave in the second medium. Secondly, the electron beam and driving laser pulses should be properly coupled into the second medium. Thirdly, the electron beam should be accelerated in the second medium without an additional electron injection. The first 4-mm helium gas jet was optimized to obtain a 400 MeV electron beam by tuning the gas pressure to have an electron density of 2 × 1018 electrons/cm3. No electron beam signal was observed when the second jet was used alone with densities below 1 × 1018 electrons/cm3. A significant enhancement of electron energy was observed with the dual gas jet target having electron densities of 2 × 1018 electrons/cm3 for the 4-mm jet and 0.8 × 1018 electrons/cm3 for the 10-mm jet. The gap between the two jets was about 2 mm, and the laser focus was at the middle of the gap. At this condition, the electron bunch from the first jet could be successfully coupled to the second target because the low plasma density in the second jet enlarged the plasma wavelength to have a higher chance to catch the electron bunch from the first target. In addition, the second target having a lower density than the self-injection threshold can prohibit continuous self-injection that can reduce the acceleration field strength. When the plasma densities of the two jets were independently controlled, the electron energy was over 3 GeV. At this condition, the electron beam has a charge of about 10 pC over 2 GeV energy, energy spread about 50%, and beam divergence of about 4 mrad.
The dual-stage acceleration can be a simple solution to obtain a high-energy electron beam. Recently, a dual-stage acceleration with two driving laser pulses was demonstrated by using capillary discharge media [21]. Even though we can expect an energy gain at each stage in a staged acceleration, precise control of each stage for stability is challenging. In the dual gas jet target, the turbulence between the targets can also make the electron beam unstable. Thus, the method to handle the qualities of the accelerated electron beam should be investigated by manipulating the driving laser pulse and plasma medium. In addition, the electron energy with dual-stage LWFA was still much less than the 10 GeV that is expected for PW lasers because the laser propagation is limited to be an order of 1 cm. For increasing the electron energy further, an external guiding structure for PW laser pulses should be applied to keep the laser intensity over 10 cm.
In the dual-stage acceleration, the PW laser pulse was stretched to be positively chirped with a duration of 60 fs. It was stretched to control the acceleration gradient of LWFA by manipulating the pulse’s spectral phase [22]; such a control method was demonstrated experimentally at UQBF [13][23]. In particular, positive group-delay dispersion (GDD) enhanced the energy and charge of the electron beam, and third-order dispersion (TOD) improved the energy further and the stability of the beams. The combination of a dual-stage target and careful control of laser pulse properties can be an effective way to shape the electron beams and control the acceleration process.

More
© Text is available under the terms and conditions of the Creative Commons Attribution (CC BY) license (http://creativecommons.org/licenses/by/4.0/)
Upload a video for this entry
Information
Subjects: Engineering, Manufacturing
Contributor MDPI registered users' name will be linked to their SciProfiles pages. To register with us, please refer to https://encyclopedia.pub/register :
Hyung Kim
View Times: 88
Revisions: 2 times (View History)
Update Time: 30 Jun 2021
Table of Contents
1000/1000
Hot Most Recent