Submitted Successfully!
Thank you for your contribution! You can also upload a video entry related to this topic through the link below:
https://encyclopedia.pub/user/video_add?id=11366
Check Note
2000/2000
Eco-Friendly Colloidal Aqueous Sol-Gel Process
Edit
Upload a video
This entry is adapted from 10.3390/catal11070768

This entry reviews an eco-friendly process for producing TiO2 via colloidal aqueous sol–gel synthesis, resulting in crystalline materials without a calcination step. Three types of colloidal aqueous TiO2 are reviewed: the as-synthesized type obtained directly after synthesis, without any specific treatment; the calcined, obtained after a subsequent calcination step; and the hydrothermal, obtained after a specific autoclave treatment. This eco-friendly process is based on the hydrolysis of a Ti precursor in excess of water, followed by the peptization of the precipitated TiO2. Compared to classical TiO2 synthesis, this method results in crystalline TiO2 nanoparticles without any thermal treatment and uses only small amounts of organic chemicals. Depending on the synthesis parameters, the three crystalline phases of TiO2 (anatase, brookite, and rutile) can be obtained. The morphology of the nanoparticles can also be tailored by the synthesis parameters. The most important parameter is the peptizing agent. Indeed, depending on its acidic or basic character and also on its amount, it can modulate the crystallinity and morphology of TiO2. Colloidal aqueous TiO2 photocatalysts are mainly being used in various photocatalytic reactions for organic pollutant degradation. The as-synthesized materials seem to have equivalent photocatalytic efficiency to the photocatalysts post-treated with thermal treatments and the commercial Evonik Aeroxide P25, which is produced by a high-temperature process. Indeed, as-prepared, the TiO2 photocatalysts present a high specific surface area and crystalline phases. Emerging applications are also referenced, such as elaborating catalysts for fuel cells, nanocomposite drug delivery systems, or the inkjet printing of microstructures. Only a few works have explored these new properties, giving a lot of potential avenues for studying this eco-friendly TiO2 synthesis method for innovative implementations.

Photocatalysis is a well-established process for the effective and sustainable removal of a large range of organic pollutants, both in liquid and gaseous media [1]. This phenomenon consists of a set of oxidation-reduction (redox) reactions between the organic compounds (pollutants) and the active species formed at the surface of an illuminated photocatalyst (usually a photoactivable semiconductor solid). Generally, when the solid photocatalyst is illuminated (Figure 1), electrons from the valence band are promoted to the conduction band. This results in electron–hole pairs, which can react with O2 and H2O, adsorbed at the surface of the photocatalyst, to produce hydroxyl (●OH) and superoxide (O2−●) radicals. These radicals can attack organic molecules and induce their degradation in CO2 and H2O, if the degradation is complete [2]. 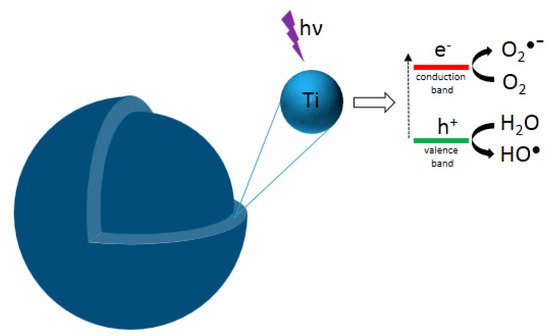 Figure 1. Schematic representation of photocatalytic TiO2 NP: photogenerated charges (electron and hole) upon absorption of radiation.
Various semi-conductors can be used as photocatalysts, such as NiO [3], ZnO [4], CeO2 [5], MnO2 [6], or TiO2 [7]. The most widely used solid photocatalyst is TiO2 [7][8], which is a non-toxic and cheap semiconductor sensitive to UV radiation [8]. TiO2 exists in three different crystallographic structures: anatase (tetragonal structure with a band gap of 3.2 eV), brookite (orthorhombic structure with a band gap >3.2 eV), and rutile (tetragonal structure with a band gap of 3.0 eV) [7]. The best phase for photocatalytic applications is anatase [7]. However, the use of TiO2 as a photocatalyst has two main limitations [7]: (i) the fast charge recombination, and (ii) the high band gap value which calls for UV light for activation. Therefore, the amount of energy required to activate anatase TiO2 is high. Indeed, its band gap width (3.2 eV) corresponds to light with a wavelength inferior or equal to 388 nm [7] and so, in the case of illumination by natural light, only the most energetic light will be used for activation, which corresponds to 5–8% of the solar spectrum [8]. To prevent these limitations, several studies have been conducted [9][10][11][12] to increase the recombination time and extend the activity towards the visible range. Most works consisted in modifying TiO2 materials by doping or modification with a large range of different elements, such as Ag [9], P [13], N [14], Fe [11][12], porphyrin [15][16], etc. Therefore, the synthesis process of TiO2 must be easily adjustable to incorporate such dopants/additives when needed, depending on the targeted application.
Several processes exist to produce TiO2 photocatalysts, the main methods being chemical or physical vapor deposition [17][18], aerosol process [19], microwave [20], reverse micelle [21], hydrothermal [22], and laser pyrolysis [23]. These processes often use severe synthesis conditions, such as high pressure, high-temperature, or complex protocols. Another possible synthesis pathway is the sol–gel method [24], which has proven to be effective for the synthesis of TiO2 in the form of powders or films, with control of the nanostructure and surface properties [25][26][27][28][29]. The sol–gel process is classified among “soft chemistry” protocols because reactions occur at low temperature and low pressure. The titanium precursor, usually an alkoxide, undergoes two main reactions: hydrolysis and condensation ((1)–(3) from Figure 2) [24][30][31]. The condensation gives the Ti-O-Ti network formation. 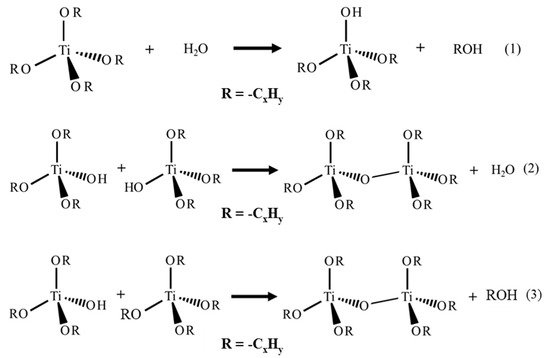 Figure 2. Hydrolysis and condensation reactions of the sol–gel process with Ti alkoxide precursor.
By controlling the rate of the hydrolysis and condensation reactions, a liquid sol or a solid gel is obtained. In order to produce TiO2 by sol–gel processes, an organic solvent is often used. This organic solvent, such as 2-methoxyethanol, is able to complex the titanium precursor (for example, titanium tetraisopropoxide, TTIP, Ti-(OC3H7)4) to control its reactivity. A stoichiometric amount of water is added to avoid fast precipitation [24][31]. The material then undergoes drying and calcination steps to remove residual organic molecules and to crystallize amorphous TiO2 in anatase, brookite, or rutile phases [32]. In the last decade, attempts at reducing the use of large amounts of organic solvent have been heavily investigated, in order to develop greener syntheses. The use of water as the main solvent was made possible by the use of a peptizing agent. By definition, a peptizing agent (PA) is a substance that, even in small amounts, prevents the agglomeration/flocculation of particles and a decrease in viscosity through enhancing the dispersion in aqueous media [33]. The PA allows crystallization at low temperature, even if the titanium precursor has precipitated. The synthesis of high crystalline TiO2 nanoparticles, through colloidal aqueous sol–gel in presence of PA, has been successfully reported in the literature [34] and is the main subject of this review.
This synthesis path was first referenced at the end of the 1980s [35][36][37]. Water is present in a large excess compared to the Ti precursor, and peptizing agents are used to form small TiO2-crystalline nanoparticles from various Ti precursors at low temperature (<100 °C) [8][38][39], resulting in the formation of a crystalline colloid. Although it is seldom used in the development of TiO2 synthesis processes, since organic solvents are preferred to better control the Ti precursor reactivity, this preparation method presents a lot of advantages and fulfills the principles of green chemistry that are currently being promoted: (i) the synthesis conditions are soft as it is a sol–gel process; (ii) easy protocol with no risky conditions; (iii) low use of organic reagents, as water is the main solvent; and (iv) crystalline materials are obtained without thermal treatment. Additionally, this synthesis has other advantages, such as: (i) very stable colloids are obtained, allowing the elaboration of coatings very easily by classical deposition techniques (spray-, dip-, spin-, or bar-coating); (ii) protocol easily modified to introduce dopants or additives; and (iii) production at larger scale, up to 20 L.
The goal of this review is to evaluate the state of the art of the research into this not very well-known eco-friendly process for producing TiO2 via colloidal aqueous sol–gel synthesis, resulting in crystalline materials without a calcination step. A literature review allowed us to find about 115 articles making use of this synthesis process to produce TiO2 materials, spanning from 1987 to 2020. Figure 3 represents the year distribution of these 115 articles. The number of articles over the past 30 years was quite low, due to several reasons: (i) the hydrolysis of the Ti precursor is much easier to control in alcohol solvent and (ii) very fast in water, (iii) the use of water to replace organic solvents for greener processes is a quite recent requirement in chemical processes. Nevertheless, the development of this process has become more and more important over the last ten years. 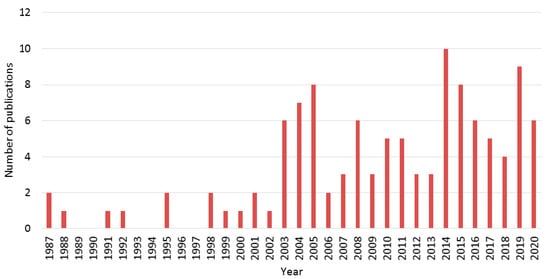 Figure 3. Number of publications per year about colloidal aqueous sol–gel synthesis of TiO2 materials collected for this review.
An increase of interest in this topic in the past ten years is clearly observed. Throughout this review article, the synthesis protocol will be detailed with a focus on the most important parameters, in order to template the resulting TiO2 material. Indeed, by changing synthesis parameters, the three different phases of TiO2 can be obtained, without any thermal treatments. Moreover, specific morphologies can also be produced. In some of the selected articles, thermal post-treatments (calcination or hydrothermal treatment) are applied to the as-synthesized materials, therefore their impact on the crystallinity and morphology of the resulting TiO2 materials will also be reviewed in this paper.
Finally, the photocatalytic properties of these aqueous TiO2 materials will be also reviewed and linked to their physico-chemical characteristics. In the end, new emerging applications will be highlighted.

Besides the crystallite formation at low temperature, colloidal aqueous TiO2 synthesis allows the production of specific morphologies, depending on the synthesis conditions and the post-treatments applied. The following sections detail the TiO2 morphologies obtained, depending on the same three synthetic steps: as-synthesized, and after calcination or hydrothermal treatments. The morphology is linked to the crystalline phase produced. The morphology depends on the crystalline phases produced during the synthesis. Indeed, anatase and brookite phases mainly lead to spherical nanoparticles, while rutile gives rod-like nanoparticles [40].
A particularity of this synthesis method using peptization is that the crystallite size and the nanoparticle size are the same. Indeed, it was shown in many studies [8][38][41][42][43][44][45][46] that one particle is made of one crystallite, thanks to comparisons made between XRD (crystallite size estimated by Scherrer formula) and TEM imaging.

As-synthesized TiO2 materials are stable colloids that are composed of nanoparticles in the range of 3–10 nm [47][48]. For the materials composed of anatase or an anatase/brookite mixture, all studies report similar spherical nanoparticles below 10 nm, as shown in Figure 4a as an illustrative example [43]. When rutile phase is present, the morphology of rutile crystallites corresponds to nanorods, as depicted in Figure 4b [40]. Therefore, two main morphologies are observed, depending on the crystalline phases.

Figure 4. TEM micrographs of (a) TiO2 anatase/brookite spherical nanoparticles, from [43] (reproduced with permission from J. G. Mahy et al., Journal of Photochemistry and Photobiology A: Chemistry; published by Elsevier, 2016) and (b) TiO2 rutile nanorods, from [40] (reproduced with permission from S. Cassaignon et al., Journal of Physics and Chemistry of Solids; published by Elsevier, 2007).
The effect of PA on the final morphology of TiO2 will depend on the crystalline phase that is formed during the synthesis. Indeed, when anatase and/or brookite phases are formed, spherical nanoparticles are produced. Basic or acidic PA can lead to anatase/brookite phases, and thus basic or acidic PA can lead to spherical nanoparticles. When organic acid PA is used, spherical nanoparticles are produced because only anatase phase is formed. When rutile is produced, a nanorod morphology is obtained and, globally, it is when a large amount of acidic PA is used that this is the case. Therefore, in conclusion, it is difficult to state that one type of PA (acidic or basic) will produce a specific type of morphology, but it is rather linked to the resulting crystalline phase.

As for the calcination, the hydrothermal treatment allows the increase of the crystallite size (comprised between 10 and 80 nm), while keeping the morphology of the as-synthesized materials (sphere or nanorod) [52][53]. Figure 6 gives an example of spheres [54] and nanorods [55] obtained by hydrothermal treatment. 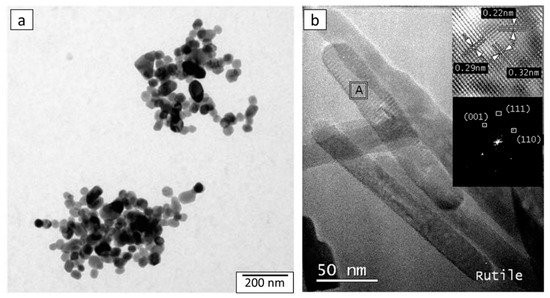 More
© Text is available under the terms and conditions of the Creative Commons Attribution (CC BY) license (http://creativecommons.org/licenses/by/4.0/)
Upload a video for this entry
Information
Subjects: Others
Contributor MDPI registered users' name will be linked to their SciProfiles pages. To register with us, please refer to https://encyclopedia.pub/register :
Julien Mahy
View Times: 53
Revisions: 3 times (View History)
Update Time: 28 Jun 2021
Table of Contents
1000/1000
Hot Most Recent