Submitted Successfully!
Thank you for your contribution! You can also upload a video entry related to this topic through the link below:
https://encyclopedia.pub/user/video_add?id=11363
Check Note
2000/2000
Natural Product Treat Lung Diseases
Edit
Upload a video
This entry is adapted from 10.3390/biomedicines9060689

As a traditional source for modern pharmaceutical discovery and potential drug leads, natural products have played an integral role in treating patients due to their unique structural, chemical, and biological diversity. A wide range of natural products can be considered promising anti-COVID-19 or anti-lung cancer agents have gained widespread attention, including natural products as monotherapy for the treatment of SARS-CoV-2 (ginkgolic acid, shiraiachrome A, resveratrol, and baicalein) or lung cancer (daurisoline, graveospene A, deguelin, and erianin) or in combination with FDA-approved anti-SARS-CoV-2 agents (cepharanthine plus nelfinavir, linoleic acid plus remdesivir) and anti-lung cancer agents (curcumin and cisplatin, celastrol and gefitinib).

1. Natural Products as Monotherapy for the Treatment of SARS-CoV-2

Natural products have demonstrated potential value, which supports this strategy as an indispensable research focus in the fight against the COVID-19 epidemic [1][2]. The chemical structures of the components described in this section are shown in Figure 1. The SARS-CoV-2 main protease (Mpro), also called the 3C-like protease (3CLpro), has a vital function in viral replication and is, therefore, a preferred drug target [3]. The papain-like protease (PLpro), another prime therapeutic target, plays an essential role in maturing viral RNA polyproteins and dysregulation of host inflammation [4]. Ginkgolic acid, a phenolic acid, is an essential component of the traditional herbal medicine Ginkgo biloba (EGb) [5]. A study has demonstrated that ginkgolic acid is characterized by half-maximal inhibitory concentration (IC50) values of 1.79 μM and 16.3 μM against SARS-CoV-2 Mpro and SARS-CoV-2 PLpro, respectively [6]. The study unambiguously showed that ginkgolic acid exerts good dual-inhibitory effects through its irreversible binding to SARS-CoV-2 cysteine proteases [6]. 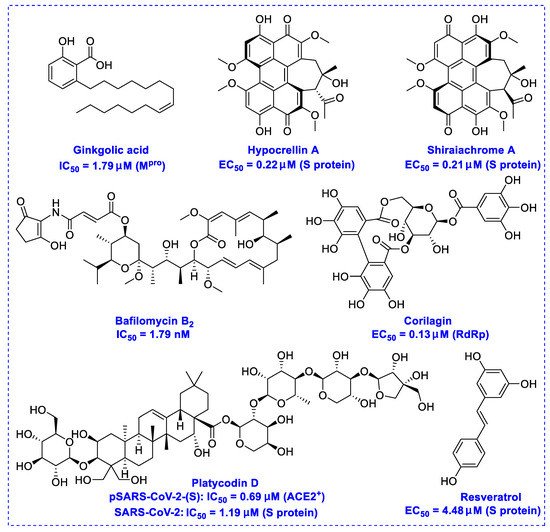 Angiotensin-converting enzyme 2 (ACE2), an essential ingredient of the renin–angiotensin–aldosterone system (RAAS), is a critical host cell surface receptor for viral infection [7]. The glycosylated spike protein (S protein) plays an essential role in mediating viral entry via interactions with the ACE2 cell surface receptor [8]. Hypocrellin A and shiraiachrome A, two-axial chiral perylenequinones, have been reported to exhibit potent effects on the infected monkey Vero E6 cell line by inhibiting the activity of the SARS-CoV-2 S protein at EC50 values of 0.22 μM and 0.21 μM, respectively, while at doses of up to 10 μM, these presented no observable cytotoxicity against these cells [9].

Transmembrane protease serine 2 (TMPRSS2), a critical factor enabling SARS-CoV-2 infection, can interact with ACE2 [10]. It has been reported that platycodin D, a triterpenoid saponin isolated from Platycodon grandiflorum, prevents TMPRSS2-driven infection in vitro by impairing membrane fusion [11]. Platycodin D has IC50 values of 0.69 μM and 0.72 μM for SARS-CoV-2 pseudovirus (pSARS-CoV-2) overexpression of ACE2 (ACE2+) and ACE2/TMPRSS2+, respectively, and IC50 values of 1.19 μM and 4.76 μM for SARS-CoV-2 in TMPRSS2-negative Vero cells and TMPRSS2-positive Calu-3 cells, respectively [11]. Resveratrol, a remarkable phytoalexin, may effectively inhibit the replication of SARS-CoV-2 S protein in Vero E6 cells at an EC50 of 4.48 μM [12], and has an excellent safety tracking record, with no cytotoxicity even up to a concentration of 150 µM [13].

The RNA-dependent RNA polymerase (RdRp) of SARS-CoV-2 is another promising target that regulates the replication of the viral genome [14]. Corilagin, a non-nucleoside inhibitor, is a gallotannin isolated from the medicinal plant Phmllanthi Fructus [15]. Corilagin has been reported to inhibit SARS-CoV-2 infection with an EC50 value of 0.13 μM in a concentration-dependent manner by preventing the conformational change of RdRp and inhibits SARS-CoV-2 replication [16]. Furthermore, corilagin, as identified via molecular dynamics simulation-guided studies, could also be used as an endogenous Mpro candidate, with an 88% anti-SARS-CoV-2 Mpro activity at concentrations of 20 μM in vitro [17].

Bafilomycin B2, which can be isolated from Streptomyces sp. HTL16, indicates enhanced inhibitory potency against SARS-CoV-2 at IC50 values of 5.11 nM (in the full-time approach) and 8.32 nM (in the pretreatment-of-virus approach) in Vero E6 cells, respectively [18]. While bafilomycin B2 has demonstrated potential effectiveness in inhibiting the viral entry process, evidence of its utility as anti-SARS-CoV-2 agents in vivo is currently insufficient.

The above evidence supports the potential value of the above natural products as therapeutic agents for the treatment of the novel SARS-CoV-2 infection, suggesting more validation studies (both in vitro and in animal models as well as on humans) could be encouraged to perform. Besides the above-mentioned molecules, several other natural products have also been shown to exhibit potent anti-SARS-CoV-2 activities in vitro. Table 1 summarizes a range of studies investigating the in vitro effects of anti-SARS-CoV-2 agents since 2020.

Table 1. Other natural products with anti-SARS-CoV-2 activities in vitro.

Traditional Chinese medicines have attracted considerable attention due to their ability to effectively inhibit SARS-CoV-2 [43][44][45]. For example, the Qingfei Paidu decoction (QFPD) has shown an ability to treat COVID-19 patients at all stages with excellent clinical efficacy (cure rate >90%) [46][47]. Shuanghuanglian oral liquid or injection (SHL), another well-known traditional Chinese medicine, dose-dependently inhibits SARS-CoV-2 Mpro replication [48]. In addition to the above-mentioned QFPD and SHL, several other traditional Chinese medicines (such as Kegan Liyan oral liquid and Toujie Quwen granule) listed in Table 2 contain Scutellaria baicalensis Georgi (Chinese name: Huangqin), whose major component is baicalein, exerts a marked anti-SARS-CoV-2 effect (IC50 of 0.94 μM, and SI > 212) [49]. Furthermore, it is crucial to investigate how herbal medicine affects SARS-CoV-2 infection by studying its active ingredients. To elucidate the underlying molecular mechanisms, a crystal structure of SARS-CoV-2 Mpro complexed with baicalein was constructed at a resolution of 2.2 Å (the Protein Data Bank (PDB) ID: 6M2N) [48]. Analysis of the core of the substrate-binding pocket revealed multiple interactions (such as hydrogen bonding with Leu141/Gly143 and Ser144/His163, π–π interactions with Cys145 and His4, and hydrophobic interactions with Met49 and His41), which effectively blocked SARS-CoV-2 replication via noncovalent incorporation [48]. The relevant studies [50][51][52] provided direct data for a better understanding of the molecular mechanisms of Chinese herbal medicine by studying its active ingredients.

2. Natural Products as Monotherapy for the Treatment of Lung Cancer

There is no doubt that natural products have always been recognized as promising anti-lung cancer agents. Daurisoline, an autophagy blocker, is a bisbenzylisoquinoline alkaloid extracted from the herbal medicine Nelumbo nucifera Gaertn [54]. The chemical structures of the molecules discussed in this section are shown in Figure 2. Daurisoline increases the degradation of β-catenin by targeting heat shock protein 90 (HSP90) directly and decreases the expression of MYC proto-oncogene (c-MYC) and cyclin D1, which resulted in cell cycle arrest at the G1 phase in human lung cancer A549 cells and Hop62 cells lines to exert its anti-lung cancer activity [55]. More importantly, in animals, daurisoline has been reported to be a promising anti-lung cancer agent (by inhibiting tumor growth in lung cancer xenografts) with no observable side effects, thus highlighting a potential role for daurisoline in the treatment of lung cancer [55]. Another recent study has shown that daurisoline can effectively inhibit SARS-CoV-2 replication at IC50 values of 3.664 μM and 0.875 μM in Vero E6 cells and in human pulmonary alveolar epithelial cells (HPAEpiC), respectively [29]. 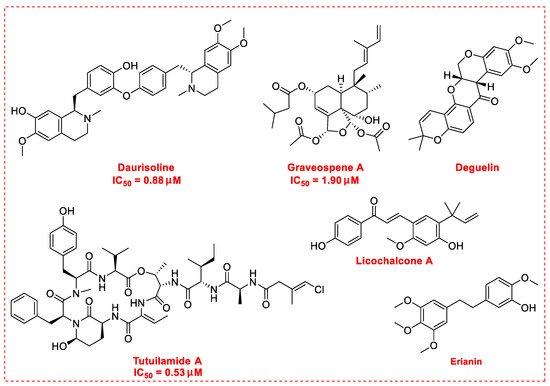 Graveospene A, isolated from the leaves of Casearia graveolens, is a new clerodane diterpenoid that has been reported to induce apoptosis in A549 cells with an IC50 value of 1.9 μM by inducing cell cycle arrest in phase G0/G1 [56]. Deguelin, a protein kinase B (AKT) kinase inhibitor, is isolated from the African plant Mundulea sericea (Leguminosae) and is commonly used to inhibit the growth of several types of human cancer cell lines [57]. Deguelin promoted the phosphorylation of myeloid cell leukemia sequence-1 (Mcl-1) protein and induced the inhibition of the wildtype and mutated epidermal growth factor receptor (EGFR)-Akt signaling pathway, which resulted in activation of downstream GSK3β/FBW7 and profound anti-NSCLC activity with no obvious side effects in vivo [58].

Licochalcone A is a natural flavonoid derived from Xinjiang licorice and Glycyrrhiza inflata. Licochalcone A is known to possess a broad spectrum of activities with important pharmacological effects in various cancer cell lines [59]. Licochalcone A can significantly increase autophagic cytotoxicity (in both A549 and H460 cell lines) and downregulated the expression of c-IAP1, c-IAP2, XIAP, survivin, c-FLIPL, and RIP1, apoptosis-related proteins via inhibiting the activity of phosphorylated extracellular signal-regulated kinase (ERK) and autophagy [60]. In addition, licochalcone A has been reported to abolish the expression of programmed death ligand-1 (PD-L1) by increasing reactive oxygen species (ROS) levels in a time-dependent manner and interfering with protein translation in cancer cells [61]. Further, licochalcone A can inhibit PD-L1 translation likely through the inhibition of the phosphorylation of 4EBP1 and activation of the PERK-eIF2α signaling pathway [61]. Licochalcone A plays a vital role in reversing the ectopic expression of key microRNA (miR-144-3p, miR-20a-5p, miR-29c-3p, let-7d-3p, and miR-328-3p) to elicit lung cancer chemopreventive activities both in vivo and in vitro [62]. In addition, licochalcone A has been reported to inhibit EGFR signaling and reduced the expression of Survivin protein in a cap-dependent translation manner to exhibit profound activity in mutated NSCLC cells [63].

Erianin, a novel dibenzyl compound, can be isolated from the traditional herbal medicine Dendrobium chrysotoxum Lindl and has been proposed as an apoptosis-inducing agent in human lung cancer cells [64]. The main mechanisms of its anti-lung cancer activity involve the induction of ferroptosis by activating Ca2+/calmodulin signaling, inhibition of cell proliferation and metastasis, and induction of cell cycle arrest in phase G2/M [65].

Tutuilamide A, isolated from marine cyanobacteria Schizothrix sp., is a novel cyclic peptide reported to exhibit moderate cytotoxicity activity in the H-460 human lung cancer cell line with an IC50 value of 0.53 μM [66]. Tutuilamide A, with the help of the vinyl chloride side chain, showed enhanced inhibitory potency with high selectivity (IC50 0.73 nM) for human neutrophil elastase, which is associated mainly with the migration and metastasis of lung cancer cells [67]. Besides the above-mentioned molecules, Table 3 also exhibits other natural products (including their underlying molecular mechanisms) with notable anti-lung cancer activities reported since 2020.

Table 3. The mechanism involved in anticancer activities of other natural products (reported since 2020).

More
© Text is available under the terms and conditions of the Creative Commons Attribution (CC BY) license (http://creativecommons.org/licenses/by/4.0/)
Upload a video for this entry
Information
Subjects: Pharmacology & Pharmacy
Contributor MDPI registered users' name will be linked to their SciProfiles pages. To register with us, please refer to https://encyclopedia.pub/register :
Zhonglei Wang
View Times: 47
Revisions: 2 times (View History)
Update Time: 28 Jun 2021
Table of Contents
1000/1000
Hot Most Recent