Submitted Successfully!
Thank you for your contribution! You can also upload a video entry related to this topic through the link below:
https://encyclopedia.pub/user/video_add?id=11344
Check Note
2000/2000
Telomerase and Telomere Natural Modulation
Edit
Upload a video
This entry is adapted from 10.3390/ijms22126381

Proper functioning of cells—their ability to divide, differentiate, and regenerate—is dictated by genomic stability. The main factors contributing to this stability are the telomeric ends that cap chromosomes. All these processes are accompanied by telomere-length modulation. Maintaining the key levels of telomerase component (hTERT) expression and telomerase activity that provide optimal telomere length as well as some nontelomeric functions represents a promising step in advanced anti-aging strategies, especially in dermocosmetics. Therefore telomere biology and telomerase activity have been of interest to scientists in various medical science fields for years, including the study of both cancer and of senescence and aging. This paper focuses on the metabolic potential of natural compounds to modulate telomerase and telomere biology and thus prevent senescence and skin aging.

Telomeres are nucleoprotein complexes located at the ends of linear chromosomes. These structures are composed of (a) specific DNA repeat sequences of 5′ TTAGGGn (conserved in vertebrates), and (b) the shelterin complex, which consists of six proteins that maintain the structure and control telomere metabolism [1]. Their primary function is to protect the linear chromosome ends against damage which could lead to DNA breaks such as single-strand breaks (SSB) or double-strand breaks (DSB). Thus, they provide chromosome integrity and stability [1]. They also protect chromosomes from joining, which would have fatal results for the cell [1]. In most normal cells, telomeres become shorter with every cell division due to the end-replication problem [2]. This issue can be compensated by telomerase, a specialized ribonucleoprotein (RNP) complex containing two major components and several complementary proteins [2]. The main subunits of the enzyme are (a) the telomerase RNA component (TERC), which plays the role of RNA template, and (b) the catalytic element, human telomerase reverse transcriptase (hTERT). The crucial role of hTERT is to catalyze the synthesis of new telomeric repeats based on the RNA template. It is noteworthy that the expression and activity of this enzyme are observed in the early stages of prenatal development. Later, telomerase expression and activity are significantly limited in most normal cells [3].
Interestingly, hTERT has been reported to play other, telomere-independent functions. One of them is associated with the modulation of mitochondrial metabolism and free radical elimination [4]. This area is of high importance when considering the anti-aging and antisenescence potential of telomerase.
Aging is defined as an age-dependent functional decline of cells, tissues, and whole organisms with gradual losses of reproductivity [5], which is determined by multiple genetic and environmental factors. Consequently, it starts at different moments for different individuals [4], but over time, the body’s metabolic systems become less efficient and cells become more susceptible to various harmful factors. Eventually, the regenerative abilities of individual organs are diminished. An in-depth understanding of aging mechanisms will bring us closer to understanding numerous pathomechanisms of age-related diseases. Many theories suggest that various aging phenotypes appear because of the age-dependent accumulation of damage [6][7]. This may eventually lead to senescence, which is defined as irreversible cell-cycle arrest driven by a variety of mechanisms, including telomere shortening, genotoxic stress, mitogens, inflammatory cytokines, and activation of the p53 tumor suppressor and/or the cyclin-dependent kinase inhibitor p16 [8]. Cellular senescence is thought to contribute to age-related tissue and organ dysfunction [9].
Both aging and senescence may result from internal or external signaling, and both contribute to the dysfunction of metabolic pathways. On the other hand, both, by limiting the proliferation of potentially damaged cells (due to exposition to harmful conditions), protect the organism from the consequences of dissemination of damaged cells.
The most harmful factors affecting cell metabolism are UV radiation, air pollution, tobacco smoke, and a high-fat and high-carbohydrate diet. Considering the direct effect of external, physical factors, the first line of the human organism’s defense is the skin. As time goes by, skin cells’ (and most somatic cells’) proliferative potential and resistance to apoptosis are decreased, and the secretion of factors that promote inflammation and tissue decline increases [10][11][12].

2. Molecular Basis of Senescence and Aging

There are three major hallmarks of aging [13]. The first is the set of primary drivers that cause damage. These are damage to the telomeres, damage to DNA, and epigenetic and mitochondrial dysfunction. The second covers antagonistic drivers that act in response to the damage, of which the main factor is senescence, manifested by irreversible growth arrest of cells. Consequently, it contributes to aging and age-related diseases that are accompanied by changes in the phenotype of an organism, chromatin remodeling, metabolic changes, increased autophagy, and the release of numerous complex pro-inflammatory factors. Senescence can occur due to normal aging, due to age-related diseases, and due to therapy (such as chemotherapy). The third refers to integrative aging drivers that are a consequence of the damage acquired over a cell’s lifetime, and is represented by proteostatic dysfunction and disruptions in the signaling pathways [14].
The lifespans of all somatic cells are limited, as Hayflick and Moorhead observed in 1961 [15]. It is noteworthy that these experiments were performed with the use of cells of different origins, including skin fibroblasts. Significantly, the metabolic alterations in cells (including senescence) are highly correlated with the culture (and environmental) conditions, including energy restrictions or oxygen levels [15]. Interestingly, the reactive oxygen species (ROS) levels in the skin are the highest of all tissues. Moreover, a clear correlation exists between ROS levels and skin aging [15].
The maximal number of cell divisions is usually cell-type-dependent, but on average is approximately 50 (limited by the end-replication problem, as mentioned above) [16]. Thus, replicative senescence reflects the number of cell divisions (and proliferative and metabolic activity) rather than time. It is modulated by numerous genes and biological factors, including oxidative stress, mitochondrial dysfunction, and replicative exhaustion [13]. It is accompanied by a pro-inflammatory phenotype that includes secretory cytokines, growth factors, metalloproteinases, and reactive oxygen species (Figure 1) [17]. Importantly, cellular senescence can convert neighboring cells to senescence in a paracrine manner [18], and they can accumulate during aging. Accompanying telomere attrition can lead to critically short telomeres that are detected by the cells as double-strand breaks. DSBs trigger the DNA damage response (DDR), a signaling cascade mediated by the ataxia teleangectasia-mutated (ATM) kinase and ataxia telangiectasia and Rad3-related (ATR) kinase, which activate p53 and lead to cell-cycle arrest and senescence [19]. Specifically, DNA damage triggers phosphorylation of the protein at serine 15 (Ser-18 in mouse) [20]. Several p53 targets and regulators have been linked to the induction of senescence, including critical ones such as CDKN1A/p21 (cyclin-dependent kinase inhibitor), which was shown to be upregulated during replicative senescence [21]. This essential mediator of p53-dependent cell-cycle arrest contributes to the growth arrest of senescent cells, but also regulates numerous target genes affecting several physiological and metabolic pathways, including mTOR and autophagy, that may contribute to mitochondrial dysfunction and senescence [19]. Another key pathway that controls senescence is p16INK4A-Rb. p16, a cyclin/cdk inhibitor, prevents phosphorylation of Rb by cyclin/cdk complexes [22]. This in turn leads to inhibition of cell proliferation by inhibitory binding to E2Fs transcription factors (pro-proliferative signaling) [23]. This results in an increased accumulation of γH2A.X and 53BP1 in chromatin, which in turn activates ATM and ATR, as well as CHK1 and CHK2. Altogether, the p53-dependent pathway is induced [24], which leads to altered transcription of the cyclin-dependent kinase inhibitor p21CIP1. In turn, p21CIP1 blocks CDK4/6 activity, resulting in hypophosphorylated Rb, and cells enter a quiescent state [25]. Importantly, the sustained induction of p53 allows for a permanent arrest of the cell cycle through persistent induction of p21CIP1 [19]. 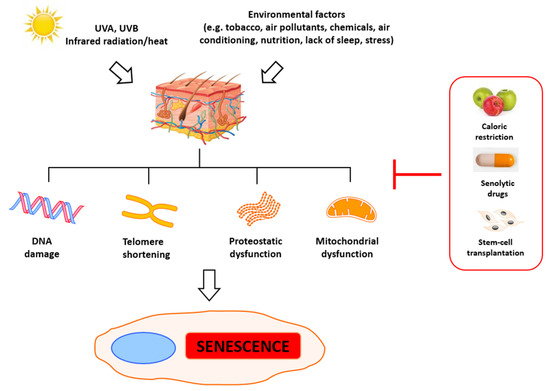 3. Roles of Telomeres in Skin Aging

The primary indicators of aging are telomere attrition, epigenetic and mitochondrial dysfunction, and general DNA damage. Significantly, this process can be accelerated by stress, which leads to the accumulation of damage and eventually to mitotic crisis orcell death [26]. Numerous agents can trigger DNA damage, including ionizing radiation, radiomimetic drugs, reactive oxygen species, metabolic errors during replication and transcription [27], and deficient DNA repair [28]. Some of those factors are just a result of cells’ metabolic activity and cannot be eliminated, but some of them can be prevented to slow down senescence and aging. Evaluation of the aging of skin has revealed the primary roles of alterations observed in the metabolism of fibroblasts. In young skin, fibroblasts adhere to the surrounding intact extracellular matrix (ECM), which is mainly comprised of type I collagen [29][30]. In aged skin, fibroblast attachment is impaired due to progressive ECM degradation, resulting in fibroblast size reduction, decreased elongation, and collapsed morphology [29][31][32][33][34]. Simultaneously, their proliferative potential is also significantly reduced, which impedes skin regeneration, thus contributing to progressive aging. The reduction of dermal fibroblast spreading and cell size can also increase mitochondrial ROS generation, which induces senescence [35].

More
© Text is available under the terms and conditions of the Creative Commons Attribution (CC BY) license (http://creativecommons.org/licenses/by/4.0/)
Upload a video for this entry
Information
Subjects: Biochemistry & Molecular Biology
Contributor MDPI registered users' name will be linked to their SciProfiles pages. To register with us, please refer to https://encyclopedia.pub/register :
Barbara Jacczak
View Times: 60
Revisions: 3 times (View History)
Update Time: 11 Oct 2021
Table of Contents
1000/1000
Hot Most Recent